The overall objective of the Southern California Particle Center (SCPC) is to investigate the mechanisms that produce the health effects associated with exposure to particulate matter (PM) and vapor phase co-pollutants, and to understand how toxic mechanisms and resulting health effects vary with the source, chemical composition, and physical characteristics of PM.

The SCPC is a team of highly respected researchers committed to a strong multidisciplinary program that addresses the challenging public health questions posed by PM pollution with a focus on the unique urban setting of the Los Angeles air basin. Our research projects are united by a hypothesis that chemical composition and physical characteristics of PM related to PM sources determine toxicity and exposure-response relationships. Variations in exposure according to source, season, and location influence the resulting human health outcomes. The principal mechanistic hypothesis of the SCPC is that many health effects associated with PM exposure including adverse respiratory and cardiovascular outcomes derive from the induction of oxidative stress and covalent modification of biological molecules by reactive chemical species (organic or inorganic) in PM. Oxidative stress and inflammatory responses related to asthma and atherosclerosis are a particular focus. Integral to our toxicological hypothesis is the role of antioxidant defense pathways that protect against the pro-inflammatory effects of PM.

The studies undertaken by the SCPC address research priorities identified by the EPA, including source linkages, susceptibility to PM, biological mechanisms for PM, and exposure-response relationships. Our research to address these priorities is integrated across a wide variety of disciplines, including aerosol formation and characterization, advanced analytical chemistry, exposure assessment, chemical toxicology, genetic toxicology and immunology, animal toxicology, epidemiology and biostatistics. Linking the diverse research efforts into a coordinated whole is an overarching theme, as illustrated in the pictorial diagram of the five SCPC projects. 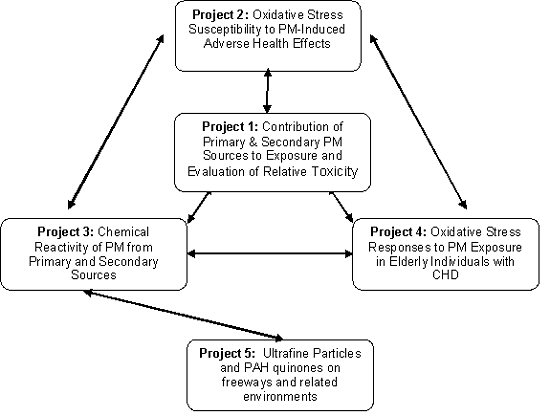 During year two the SCPC made advances in all proposed research areas and several manuscripts were published or submitted for publication. We have continued our investigations of the physical and chemical characteristics of PM associated with emissions sources and the spatial and temporal variability of these characteristics. In year two we completed detailed chemical composition analysis of particles collected during year one along a Los Angeles freeway that carries heavy diesel traffic, including the first study of size-segregated organic analysis of ultrafine particles (UFP). A novel finding was that acidity of UFP increased with smaller size fraction. The smallest UFP are also highly volatile with high organic content. Elemental carbon and lighter molecular weight polycyclic aromatic hydrocarbons (PAH) were elevated at the diesel freeway compared to a gasoline-only freeway previously studied.

A summer sampling campaign was conducted at the USC campus that included a comparison of morning and afternoon samples. UFP numbers peak in the early afternoon due to the enhanced formation of secondary aerosols from photochemical reactions. The afternoon aerosol was more volatile than morning UFP and higher in oxygenated organic acids, consistent with photochemical origin. In comparison, morning UFP was higher in alkanes, PAH and hopanes, consistent with impacts of fresh traffic sources. A pilot study was performed in preparation for our year three campaign in Long Beach, California to investigate intra-community variability in PM sources, composition and exposure levels. In Riverside, CA PM (filters) and vapor phase (XAD resin) samples were collected simultaneously, for comparative analysis in toxicological assays. After extraction, the vapor phase samples were sent to SCPC investigators in Japan for use in assays performed there.Many of the PM samples collected during year two have been analyzed in vitro and chemical assays.

The SCPC is actively pursuing hypotheses related to the specific chemical and cellular mechanisms by which PM produces toxicity in biological systems. Our mechanisms work comprises several components. In one set of assays, the chemical properties of PM samples are explored in cell-free assay systems that provide information on the reactivity of the samples and specific PM components. During the second year, an assay that measures the production of reactive oxygen species was applied to PM samples for which extensive data on specific metal and organic constituents was available. Under the conditions of the assay, copper was much more active than iron in producing the reactive oxygen species measured by the assay. This finding has relevance to studies of health or toxicology outcomes that use total metals mass rather than speciated metals as a predictive measure. Our work on the ability of reactive compounds in PM to act as electrophiles in the modification of cellular proteins, reported in year one, continued and was prepared for publication during year two. The finding that covalent bonds formed by PM components can disrupt cellular functions is extremely important to understanding PM toxicity. The common thinking in recent years has been that oxidative stress is the major chemical mechanism of toxicity for many of the observed health effects of PM, but covalent changes in cellular macromolecules could be involved in producing effects related to cumulative exposure. Covalent modification as a chemical mechanism of PM toxicity implicates a wider range of potentially active toxicants in PM than does consideration of reactive oxygen generation alone. Many compounds capable of covalent bonding are found in the vapor phase thus suggesting that the vapor phase may be of importance as well as PM. It is also important to note that chemical mechanisms of toxicity are not exclusive, and in fact are highly inter-related.

The SCPC made advances in studies of cellular mechanisms relevant to PM toxicity. Cells were treated in vitro with particles from diesel exhaust in several different lines of experimentation. One set of studies demonstrated that particles from diesel exhaust altered the response of dendritic cells to a known allergic stimulus. Dendritic cells are important in the production of allergic responses because they process signals that affect the differentiation of T-cells; the findings may provide a mechanistic explanation of the ability of PM to act as an adjuvant, enhancing sensitization to allergens via effects on T-cell differentiation. In a study of endothelial cells, a synergistic effect of diesel exhaust PM extracts and an oxidized component of low density lipoprotein (a known stimulator of atherogenesis) was observed on the expression levels of genes that correspond to pathways relevant to vascular inflammatory processes such as atherosclerosis. The changes in gene expression observed in the co-exposed endothelial cell cultures were consistent with enhanced expression of representative genes in livers of hypercholesterolemic mice exposed to ambient UFP.

Analysis of brain samples from mice that are genetically prone to atherosclerosis found that levels of two transcription factors involved in inflammatory processes were increased by exposure to concentrated UFP near a freeway relative to unexposed mice. An animal model for allergic sensitization was used to examine the effects of concentrated ambient PM (CAPs) exposure on markers of inflammation and allergic airways responses. Intranasal instillation of UFP resulted in a substantial adjuvant response, as indicated by bronchoalveolar lavage cell counts, histopathological detection of lung lesions, and morphometry of mucosubstances in the airways. However, exposures to aerosolized CAPs did not alter lung lesions or cell counts in sensitized mice.

The SCPC human panel studies focus on linking oxidative stress responses in elderly individuals with coronary artery disease to a range of PM exposure metrics. During year two, we carried out the field work for a second set of subjects including indoor and outdoor exposure measurements and blood draws that will be analyzed fully during year three. Analysis of the biomarker data from the first year of the study was performed, using pollutants measured indoors and outdoors as well as estimates of primary and secondary organic carbon as metrics for exposure. Linear mixed effects models that control for temperature and for subject infections were applied. The overall findings from the first set of subjects suggest that antioxidant enzyme activity is inhibited by primary PM aerosols. In the first phase of this panel study, this reduction of antioxidant capacity was seen only among subjects being treated with rennin-angiotensin-aldosterone system antagonists.

During year 3 we are planning two meetings although one will occur in October and therefore is a year 4 endeavor. One meeting will involve scientists from a wide range of institutions and focus on new directions in exposure assessment with some emphasis on biological exposure assessment. The date has not been set yet, but we will keep EPA informed of plans. The second meeting will be held at the ISEE and ISEA meeting to be held in Los Angeles in October. The meeting will be held from Sunday Oct 12 through Thursday Oct 16, 2008, at the Pasadena Convention Center. To kick off the meeting, we are hoping to attract California governmental leaders to talk about several of the recent California initiatives on Air Pollution, Green Chemistry, Global Climate Change/Air Pollution, and Biomonitoring.


Subprojects under this Center: (EPA does not fund or establish subprojects; EPA awards and manages the overall grant for this center).
R832413C001 Contribution of Primary and Secondary PM Sources to Exposure & Evaluation of Their Relative Toxicity
R832413C002 Project 2: The Role of Oxidative Stress in PM-induced Adverse Health Effects
R832413C003 The Chemical Properties of PM and their Toxicological Implications
R832413C004 Oxidative Stress Responses to PM Exposure in Elderly Individuals With Coronary Heart Disease
R832413C005 Ultrafine Particles on and Near Freeways