The Children’s Environmental Health Center (CEHC) was established in 1998 to investigate effects of the environment on children’s respiratory health, with a focus on asthma and airway disease. The theme of the Center and its research focus were chosen based on the clinical and public health importance of childhood respiratory diseases and the potential importance of common environmental exposures on the etiology of these conditions, especially among susceptible subgroups of children. The Center also established a community outreach and translation program to translate research findings to communities and inform policymakers about the effects of the environment on children’s health.

The broad objectives of the Center's research activities during its second cycle were:

Specific Aims
To assess Hypotheses 1 & 2:
To assess Hypothesis 3:
To promote effective communication between partners and to promote broader exchange with the community-based coalitions:
Accomplishments
In the last 5 years, we have evaluated three hypotheses about traffic-related air pollution: (1) Prevalent asthma with early onset (in the first 5 years of life) is strongly associated with early life traffic within 100 meters of the child’s home; (2) Early onset asthma is independently associated with variation of NO, NO2 and ozone within communities, which represent regional products of atmospheric photochemical oxidation of traffic-related pollutants, but also which vary locally with traffic; (3) The effects of air pollutants on asthma risk in children are modified by polymorphisms in GSTM1, GSTP1, NQO1, HO-1, and TNFα, genes involved in response to oxidant air pollutants.
We found early life asthma that was symptomatic during the year prior to study entry at ages 5-7 was associated with traffic proximity and with NO, NO2 and NOx estimated from dispersion models and traffic volume. There was a dose-response relationship between distance to traffic corridors, with increased risk beginning approximately 200 meters from a major road and increasing approximately linearly with proximity. The odds ratio was 1.6 for asthma within 75 meters of major roads (including freeways, highways and major arterials) where 15 percent of all participants lived. Risk was larger in children with early life (and longer duration) exposure based on residence at the same address since age 2.
Susceptible groups were identified, including increased risk in girls, consistent with previous literature. Risk of asthma symptoms, severity and prevalence (or asthma incidence in independently funded related work) associated with traffic-related local or regional air pollution was found to be modified by genetic variants involved in oxidative/nitrosative stress pathways, including GSTM1 and P1, TNFα, and EPHX1.
The associations of lifetime asthma with NOx, NO2 and ozone measured in a case-control study were not significant. However, based on these and additional measurements at a total of over 1,000 locations across Southern California improved models predicting spatial surfaces of these pollutants in our study communities based on traffic distance, volume, meteorology, population density, and other nearby land use. Predicted exposure to NOx was associated with asthma and strongly associated with novel wheezy phenotype based on the number and severity of symptoms. Regional pollution was not associated with asthma across study communities, after adjusting for local traffic-related exposure, although ozone was found to modify the effect of genetic variants on the risk of asthma and asthmatic bronchitis.
Conclusions
This study was conducted as a community based participatory research (CBPR) project in close coordination with COTC goals to develop community capacity to understand and apply research results to policy-related prevention. In this context, novel risk assessment methods were developed that identified a several-fold increase in air pollution-related emergency room visits and other severe asthma morbidity likely to result from increased asthma rates due to traffic proximity in the study communities of Long Beach and Riverside. Work with community partners to develop estimates of traffic volume on major traffic corridors has led to novel pilot work by Center investigator Scott Fruin to use these methods to improve our prediction model surfaces.
Project 2: Pollution-Enhanced Allergic Inflammation and Phase II Enzymes
Specific Aims
Accomplishments
Aim 1
We had previously shown that challenge of individuals with diesel exhaust particles (DEP) induced GSTM1 expression in adults. We developed real-time quantitative PCR (RT-PCR) to measure gene expression of NQO1, GSTM1, GSTP1 and HO-1 from cells recovered from nasal washes. We recruited a total of 20 adult subjects and performed a double-blind randomized cross-over study to test the expression of these enzymes in response to nasal challenge with four different DEP doses (0, 30, 100, or 300 µg). Subjects performed nasal lavage sampling immediately before and 24 hours after each DEP challenge. DEP was administered by nasal spray into one nare via an atomizer. Each subject was randomized to one of 24 possible sequences of 4 DEP exposures. A 4-week wash-out period was observed between each DEP exposure. All subjects had fully functional versions of GSTM1 and NQO1. The relative levels of gene expression were calculated after normalization to an internal control. 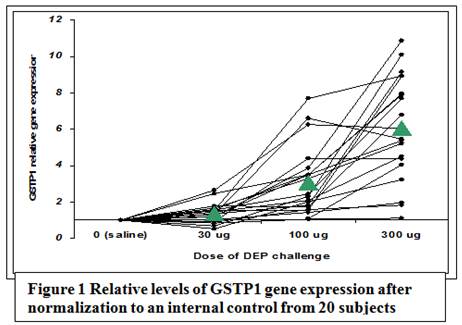 In each case, control expression (that seen in cells from lavages after challenge with saline) of the genes was given an arbitrary figure of 1.0 and relative expression calculated with reference to baseline. Figure 1 shows that expression of GSTP1 increased 24 hours after challenge with DEP. For nearly all subjects, there is a dose-response relationship between gene expression and the dose of DEP used in the nasal challenge. Similar results were observed in response to DEP challenge in expression of GSTM1, NQO1 and HO-1. Although there was substantial inter-individual variation in the expression of any single enzyme, there was a very significant correlation between expression of all four enzymes, suggesting they are closely regulated. Cellular inflammation was measured in nasal lavages performed 24 hours after DEP challenge. As expected, there was a strong correlation between total cell number and the dose of DEP used in the nasal challenges. Moreover, total cell numbers were inversely correlated with expression of GSTP1 (p = 0.03) and GSTM1 (p = 0.04). DEP enhanced production of IL-8, TNF-α and GM-CSF in a dose-dependent fashion. Higher DEP challenge dose concentrations were associated with increased levels of chemokines. 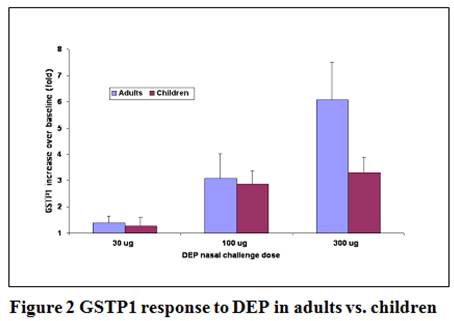 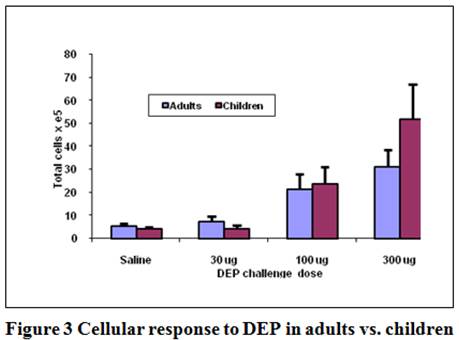 We expanded these studies and completed similar challenges in 20 children. In adults, DEP induced expression of GSTP1 in a dose-dependent fashion. With increasing concentrations of DEP challenge, there were higher levels of GSTP1-relative gene expression. Cellular infiltration was inversely correlated with GSTP1 enzyme gene expression. Increased levels of GSTP1 were associated with lower cell count numbers. In children, the degree of cellular infiltration also correlated with dose of nasally administered DEP challenge. Higher concentrations of DEP elicited a larger number of total cells recovered from nasal lavage fluid obtained 24 hours after DEP exposure. However, as compared to adults, this effect in children was more robust at the DEP challenge of 300 µg. In these children, DEP also induced expression of GSTP1. At DEP concentrations of 30 and 100 µg, there were higher levels of GSTP1-relative gene expression. However, GSTP1-relative gene expression for the DEP nasal challenge of 300 µg was decreased in children as compared to adults. Similar results were seen with the other three measured Phase II enzymes.
These results suggest that children appear to be more vulnerable to the adverse effects of oxidant pollutants, and they support the concept that the potential of an individual to mount a Phase II antioxidant defense may regulate the development of acute and chronic airway inflammation. We extended these studies to test whether in vitro Phase II enzyme expression can predict in vivo inflammatory responses to DEP. We recruited 20 allergic, but otherwise healthy volunteers and obtained blood samples. We purified peripheral blood mononuclear cells (PBMNCs) from the subjects and stimulated the cells with 10 μg/mL of DEP in 1 mL plates. After incubation for 24 hours, glutathione-S-transferase (GST) activity was measured by following the conjugation of 1 mM 1-chloro-2,4,dintrochlorobenzene (CDNB) with 1 mM GSH in 200 mM sodium phosphate buffer as measured at 340 nm using a spectrophotometer over time. Enzyme activity was expressed as millimoles of CDNB conjugated per minute per milligram of cytosolic protein. The subjects were then challenged intranasally with 300 μg of DEP with nasal lavages performed prior and 24 hours after challenge. 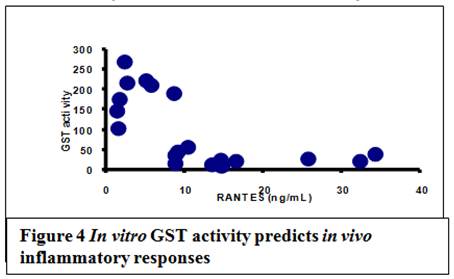 The CEHC has yielded a wealth of data on the acute and chronic respiratory effects of air pollutants; gene-environment interactions; host susceptibility to air pollutants; novel spatial modeling approaches and methods; and exposure assessment methodology. The interdisciplinary nature of this Center has made it possible to develop an integrated program that is synergistic and provides a larger return on investment than would a single investigator model. In this section, we briefly summarize some of the key research findings.