The Children’s Environmental Health Center (CEHC) was established in 1998 to investigate effects of the environment on children’s respiratory health, with a focus on asthma and airway disease. The theme of the Center and its research focus were chosen based on the clinical and public health importance of childhood respiratory diseases and the potential importance of common environmental exposures on the etiology of these conditions, especially among susceptible subgroups of children. The Center also established a community outreach and translation program to translate research findings to communities and inform policymakers about the effects of the environment on children’s health.
Project 2: Pollution-Enhanced Allergic Inflammation and Phase II Enzymes
Specific Aims:

Aim 1
We had previously shown that challenge of individuals with diesel exhaust particles (DEP) induced GSTM1 expression in adults. We developed real-time quantitative PCR (RT-PCR) to measure gene expression of NQO1, GSTM1, GSTP1 and HO-1 from cells recovered from nasal washes. We recruited a total of 20 adult subjects and performed a double-blind randomized cross-over study to test the expression of these enzymes in response to nasal challenge with four different DEP doses (0, 30, 100, or 300 µg). Subjects performed nasal lavage sampling immediately before and 24 hours after each DEP challenge. DEP was administered by nasal spray into one nare via an atomizer. Each subject was randomized to one of 24 possible sequences of 4 DEP exposures. A four-week wash-out period was observed between each DEP exposure. All subjects had fully functional versions of GSTM1 and NQO1. The relative levels of gene expression were calculated after normalization to an internal control. 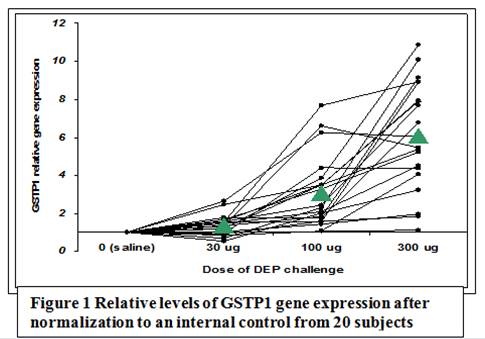 In each case, control expression (that seen in cells from lavages after challenge with saline) of the genes was given an arbitrary figure of 1.0 and relative expression calculated with reference to baseline. Figure 1 shows that expression of GSTP1 increased 24 hours after challenge with DEP. For nearly all subjects, there is a dose-response relationship between gene expression and the dose of DEP used in the nasal challenge. Similar results were observed in response to DEP challenge in expression of GSTM1, NQO1 and HO-1. While there was substantial inter-individual variation in the expression of any single enzyme, there was a very significant correlation between expression of all four enzymes, suggesting they are closely regulated. Cellular inflammation was measured in nasal lavages performed 24 hours after DEP challenge. As expected, there was a strong correlation between total cell number and the dose of DEP used in the nasal challenges. Moreover, total cell numbers were inversely correlated with expression of GSTP1 (p=0.03) and GSTM1 (p=0.04). DEP enhanced production of IL-8, TNF-α and GM-CSF in a dose-dependent fashion. Higher DEP challenge dose concentrations were associated with increased levels of chemokines.

We expanded these studies and completed similar challenges in 20 children. In adults, DEP induced expression of GSTP1 in a dose-dependent fashion. With increasing concentrations of DEP challenge, there were higher levels of GSTP1-relative gene expression. Cellular infiltration was inversely correlated with GSTP1 enzyme gene expression. Increased levels of GSTP1 were associated with lower cell count numbers. In children, the degree of cellular infiltration also correlated with dose of nasally administered DEP challenge. Higher concentrations of DEP elicited a larger number of total cells recovered from nasal lavage fluid obtained 24 hours after DEP exposure. However, as compared to adults, this effect in children was more robust at the DEP challenge of 300 µg. In these children, DEP also induced expression of GSTP1. At DEP concentrations of 30 and 100 µg, there were higher levels of GSTP1-relative gene expression. However, GSTP1-relative gene expression for the DEP nasal challenge of 300 µg was decreased in children as compared to adults. Similar results were seen with the other three measured Phase II enzymes.
These results suggest that children appear to be more vulnerable to the adverse effects of oxidant pollutants, and they support the concept that the potential of an individual to mount a Phase II antioxidant defense may regulate the development of acute and chronic airway inflammation. We extended these studies to test whether in vitro Phase II enzyme expression can predict in vivo inflammatory responses to DEP. We recruited 20 allergic but otherwise healthy volunteers and obtained blood samples. We purified peripheral blood mononuclear cells (PBMNCs) from the subjects and stimulated the cells with 10 ug/mL of DEP in 1mL plates. After incubation for 24 hours, glutathione-S-transferase (GST) activity was measured by following the conjugation of 1mM 1-chloro-2,4,dintrochlorobenzene (CDNB) with 1mM GSH in 200mM sodium phosphate buffer as measured at 340nm using a spectrophotometer over time. Enzyme activity was expressed as millimoles of CDNB conjugated per minute per milligram of cytosolic protein. The subjects were then challenged intranasally with 300ug of DEP with nasal lavages performed prior and 24 hours after challenge. 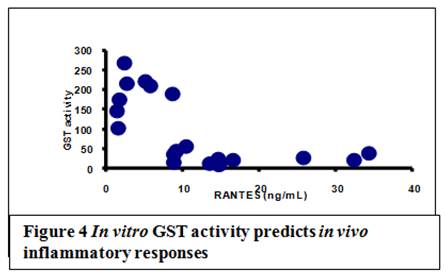 As seen in Figure 4, in vitro GST activity predicted in vivo inflammatory responses. The population could be divided into two populations: the first as those with a GST activity above 100 which had low or minimal inflammatory responses following DEP challenge. In this population (n=8), cell influx into the nose was limited and production of pro-inflammatory cytokines (GM-CSF, IL-1beta) and chemokines (RANTES, IL-8) was not statistically different after DEP challenges vs. baseline levels. The second population (n=12) had a GST activity under 60 and was characterized by a significant or very robust second inflammatory response following DEP challenge. In this population, there was a statistically significant increase in pro-inflammatory cytokines and chemokines after challenge. In addition, GST activity in this population was inversely proportional to cell numbers or RANTES production. Determining GST activity from blood cells may be a useful test to determine susceptibility to pollutants.
Aim 2
We exposed 20 healthy and 20 asthmatic subjects to diesel exhaust to study the effect of Phase II expression on lower airway responses. We could reproducibly produce a diesel particulate exposure level that was within 8% of the target level every time. These diesel particles are chemically and physically identical to diesel particles encountered in ambient air. Diesel exhaust resulted in increased expression of all four sentinel Phase II enzymes (GSTM1, GSTP1, HO-1 and NQO1) tested in cells recovered from sputum induced 24 hours after exposure to 2 hours of diesel exhaust (100 µg/m3). IL-8 levels in the sputum of subjects were significantly inversely correlated with Phase II expression. This increase was observed in both healthy and asthmatic subjects. There was wide heterogeneity in responses to DEP between subjects. While no enhanced inflammation was observed in any of the healthy subjects, four out of the twenty asthmatic subjects demonstrated a robust inflammatory response to DEP but not filtered air.
Aim 3
We have previously shown that enhancement of Phase II enzyme expression could inhibit enhancement of IgE production by peripheral blood cells in vitro. In those experiments, we used sulforaphane—a potent inducer of Phase II enzymes found in cruciferous vegetables. We tested whether this same reagent could block DEP-mediated adjuvant events in vivo in a murine model. Groups of six female BALB/c mice matched for age and weight (10-12 weeks) received aerosolized exposures to either saline, ovalbumin (OVA) (1% 20 min), DEP (1 hr) or OVA followed immediately by DEP for ten consecutive days. Mice were administered either vehicle (corn oil) or sulforaphane (4.5 µmol/mouse/day) by gavage (0.2 ml) for one week prior to the commencement of exposures up until two days after the last exposure. As expected, in the untreated group, IgG1 levels were significantly higher in mice who received both DEP and OVA than in those who were exposed to OVA alone. However, administration of sulforaphane completely ablated the adjuvant effects of DEP.
We then examined the responses of the airway epithelial cell line BEAS-2B and primary normal human bronchial epithelial cells upon treatment with sulforaphane and Phase II enzymes followed by stimulation with diesel extract (0-25 µg/ml). As expected, sulforaphane upregulated the expression of endogenous antioxidant enzymes in bronchial epithelial cells. Whereas diesel extract stimulated the production of IL-8, GM-CSF, and IL-1β from normal human bronchial epithelial cells, pre-treatment with sulforaphane for 24 hours inhibited diesel-induced cytokine production in a dose-dependent fashion. These studies suggest that sulforaphane treatment can prevent the production of pro-inflammatory cytokines in respiratory epithelial cells in vitro.
Previously, we reported that individuals who lack the ability to make the Phase II enzyme GSTM1 are at increased risk for the pro-inflammatory effects of DEP, and we have shown that enhancement of Phase II enzymes with sulforaphane can inhibit the production of pro-inflammatory cytokines in respiratory epithelial cells in vitro. In order to determine whether GSTM1 itself is important in the regulation of inflammatory response to pollutants, we used siRNA to “knock down” the GSTM1 gene in bronchial epithelial cells. Expression could be reduced by more than 90% using this methodology. Knockdown of GSTM1 augmented DEP induced cytokine production in these cells. Thus, IL-8 levels were almost three-fold higher in cells where GSTM1 expression was reduced, compared to sham-treated cells.
Finally, in a placebo-controlled dose escalation trial to investigate the in vivo effects of sulforaphane, we demonstrated that consumption of oral sulforaphane contained in broccoli sprouts homogenate (BSH) can induce a potent increase in antioxidant Phase II enzymes in airway cells. RNA expression for GSTM1, GSTP1, HO-1 and NQO1 was measured in nasal lavage cells by RT-PCR before and after sulforaphane dosing. Increased Phase II enzyme expression occurred in a dose-dependent manner with maximal enzyme induction observed at the highest dose of 200 g broccoli sprouts prepared as BSH. Significant increases were seen in all sentinel Phase II enzymes RNA expression compared to baseline. Phase II enzyme induction was not seen with ingestion of non-sulforaphane containing alfalfa sprouts. These findings suggest enhancement of Phase II enzyme expression as a novel therapeutic strategy for oxidant-induced airway disease.

Our results show that Phase II enzymes can be induced by our model air pollutant, DEP, and are critical in regulating responses and determining susceptibility to these xenobiotics. A principal finding of our results is the discovery that children have enhanced inflammatory responses to the model pollutant DEP and that this seems to be related to their reduced capacity to make a cytoprotective Phase II enzymes response. Our studies illuminate why there may be increased susceptibility of certain vulnerable individuals and populations (such as children) to oxidant pollutants and suggest that increasing the body’s Phase II responses either by therapeutic or dietary means may counteract this effect. Moreover, the discovery that in vitro GST expression is associated with in vivo inflammatory responses provides the potential to develop a diagnostic test for susceptibility to oxidant pollutants.


Journal Articles on this Report : 89 Displayed | Download in RIS Format