We have recently demonstrated that short-term exposure to inhaled concentrated airborne particulate (CAP) matter <2.5μm (PM2.5) results in components of cardiometabolic syndrome (CMS) including development of hypertension and insulin resistance. In this project, we hypothesize that chronic inhalation of CAP in conjunction with gaseous components such as ozone from distinct multipollutant atmospheres synergistically interacts with diet and genetic susceptibility to influence development of CMS. Project 3 is an integral component of the overarching theme of this center that primary air pollutants, fine PM (PM2.5) and ozone (O3), cause cardiometabolic health effects that are dependent on the local atmospheric multipollutant milieu, predisposing factors, and the interactive toxicity of multipollutant coexposure. The experiments proposed are natural extensions of human research outlined in Project 1 and acute experiments in Project 2 and will focus on conducting chronic inhalation toxicology studies in diet fed and genetic models of obesity/diabetes. In Aim 1, simultaneous chronic exposure to multipollutant CAP from two locations in Columbus, OH representing near-roadside/traffic or remotely transported/aged emissions will be examined in combination with high fat chow (HFC). The impact of CAP on glucose/insulin homeostasis, adipokines, insulin signaling, adipose and pulmonary inflammation and an analysis of dose dependence and CAP components most likely associated with these effects will be evaluated in diet sensitive (C57BL/6) and genetic models of Type II diabetes susceptibility (KKA/y). In Aim 2, we will investigate the effect of co-exposure of multipollutant CAP with ozone on the temporal development of insulin resistance and adipose/lung inflammation using the KKA/y model. We will assess dose response relationship of multipollutant-O3 mixture on insulin resistance measures (HOMA-IR and IPGTT) and novel mediators of innate immune, pivotal in the development of metabolic derangement. Based on data from Aims 1 and 2, we will design experiments in Aim 3, which will help us assess chronic effects of multipollutant CAP in potentiating inflammatory monocyte activation and infiltration into tissue niches as a central mechanism for mediating adverse metabolic effects of CAP. Using state of the art multiple exposure systems available at OSU (OASIS-1 and OASIS-2) and MI in conjunction the resources available at the ECC including the use of several novel and novel high-time resolution exposure characterization methods, GLACIER offers an unprecedented opportunity to elucidate relevant mechanisms responsible for the effects of multipollutant CAP on the pathogenesis of insulin resistance and inflammation. The insights gleaned from the acute studies planned in Projects 1 and 2 in conjunction with chronic studies in Project 3, have significant public health ramifications and may eventually lead to policy changes to avert environmental exposure to PM2.5.

Conduct of Simultaneous Exposures in OASIS-1 and OASIS-2
During the last year we have accomplished significant progress towards beginning exposures in our near road-way site (OASIS-2) and comparing this site with OASIS-1 (regional site). We are now analyzing the data and are on our way towards preparation of a paper that will provide comparative information on the characterization of these two sites in Columbus. We are also in the process of determining if source apportionment can be performed to understand the differences in sources at these two sites. Our preliminary data indicates higher BC concentration at the OASIS-2 site in keeping with its proximity to the roadway. 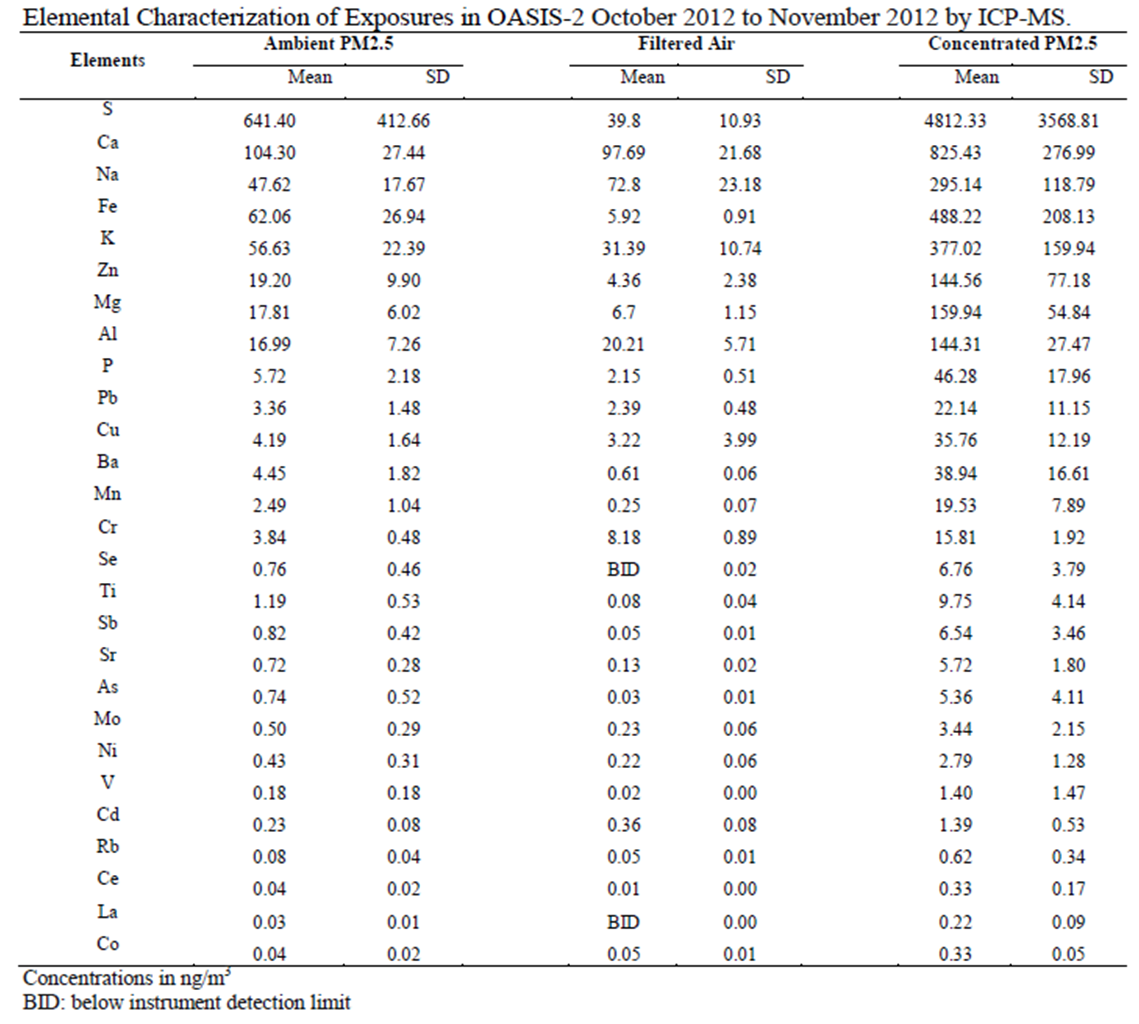 Progress in Aim 1
We have completed Specific Aim 1 and as part of these experiments report on data on the effects of concentrated ambient PM2.5 when used alone in potentiation of glucose intolerance and IR in a genetic model of Type II DM. KKay mice, which are susceptible to Type II DM, were assigned to either concentrated ambient PM2.5 or filtered air (FA) for 4-8 weeks. The mice were exposed for 6 h/d, 5 d/wk, 5 -8 weeks in a mobile trailer exposure system (“Ohio Air Pollution Exposure System for Interrogation of Systemic Effects 1,” located at the near-roadway site located in Polaris (OASIS-2). The figure outlines the BC and PM2.5 concentrations at the site during 3 separate exposures and EC/OC concentrations for one of the exposures (Exposure 3). 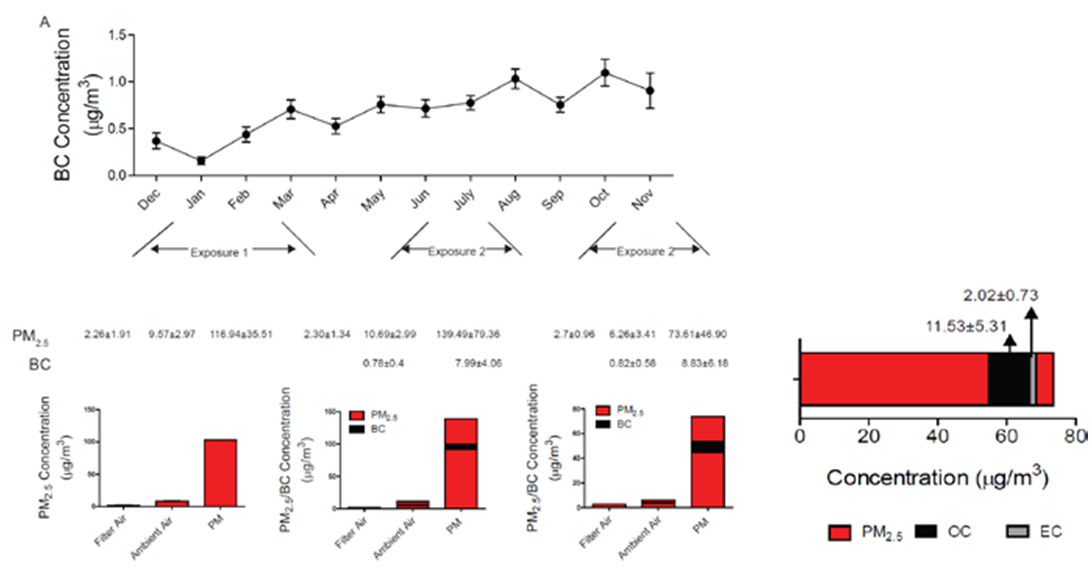 Before embarking on simultaneous exposures of PM2.5 + Ozone it was important for us to determine the extent of effects attributable to PM2.5 alone. We will perform the experiments in Aim 3, which assess chronic effects of multipollutant CAP in potentiating inflammatory monocyte activation and infiltration into tissue niches as a central mechanism for mediating adverse metabolic effects of CAP.

Journal Articles on this Report : 6 Displayed | Download in RIS Format