We recently demonstrated that short-term exposure to inhaled concentrated airborne particulate (CAP) matter <2.5 µm (PM2.5) results in components of cardiometabolic syndrome (CMS) including development of hypertension and insulin resistance. In this project, we hypothesize that chronic inhalation of CAP in conjunction with gaseous components such as ozone from distinct multipollutant atmospheres synergistically interacts with diet and genetic susceptibility to influence development of CMS. Project 3 is an integral component of the overarching theme of this center that primary air pollutants, fine PM (PM2.5) and ozone (O3), cause cardiometabolic health effects that are dependent on the local atmospheric multipollutant milieu, predisposing factors, and the interactive toxicity of multipollutant coexposure. The experiments proposed are natural extensions of human research outlined in Project 1 and acute experiments in Project 2 and will focus on conducting chronic inhalation toxicology studies in diet fed and genetic models of obesity/diabetes. In Aim 1, simultaneous chronic exposure to multipollutant CAP from two locations in Columbus, OH, representing near-roadside/traffic or remotely transported/aged emissions will be examined in combination with high fat chow (HFC). The impact of CAP on glucose/insulin homeostasis, adipokines, insulin signaling, adipose and pulmonary inflammation and an analysis of dose dependence and CAP components most likely associated with these effects will be evaluated in diet sensitive (C57BL/6) and genetic models of Type II diabetes susceptibility (KKA/y). In Aim 2, we will investigate the effect of co-exposure of multipollutant CAP with ozone on the temporal development of insulin resistance and adipose/lung inflammation using the KKA/y model. We will assess dose response relationship of multipollutant-O3 mixture on insulin resistance measures (HOMA-IR and IPGTT) and novel mediators of innate immunity, pivotal in the development of metabolic derangement. Based on data from Aims 1 and 2, we will design experiments in Aim 3, which will help us assess chronic effects of multipollutant CAP in potentiating inflammatory monocyte activation and infiltration into tissue niches as a central mechanism for mediating adverse metabolic effects of CAP. Using state of the art multiple exposure systems available at OSU (OASIS-1 and OASIS-2) and MI in conjunction with the resources available at the ECC, including the use of several novel and novel high-time resolution exposure characterization methods, GLACIER offers an unprecedented opportunity to elucidate relevant mechanisms responsible for the effects of multipollutant CAP on the pathogenesis of insulin resistance and inflammation. The insights gleaned from the acute studies planned in Projects 1 and 2 in conjunction with chronic studies in Project 3, have significant public health ramifications and may eventually lead to policy changes to avert environmental exposure to PM2.5.

In our prior years of funding for this aim, we successfully conducted experiments to determine the temporal course of diabetes development in response to ozone and reported these results in several manuscripts in collaboration with Dr. Harkema. We were interested in isolating the effects of ozone prior to conducting multipollutant exposures in combination with CAPS, which we had proposed performing as part of Aim 3 as data from our groups appeared to suggest seemingly opposing effects. Inhalation exposure to O3 was conducted in whole-body exposure chambers, and KK mice were exposed to nominal ozone concentrations of 0 (filtered room air), or 0.5 ppm, for 8 h/d, 7 d/wk for 13 wk (n = 8/group). Ozone was generated with two OREC Model OZONEV1-O ozonizers (Ozone Research and Equipment Corp., Phoenix, AZ), with compressed air used as a source of oxygen. The concentration of ozone within the chambers was monitored throughout the exposure with three Dasibi 1003 AH ambient-air ozone monitors (Dasibi Environmental Corp., Glendale, CA). The air-sampling probes were placed in the breathing zone of the mice. The chamber ozone concentration was automatically maintained through a computer-controlled closed-loop feedback system, which adjusted the amount of ozone delivered to the chamber through remotely controlled mass-flow valves. After three weeks of inhalation exposure to control air or ozone, mice were sacrificed. The weights of whole body and organs were recorded and metabolic as well as inflammation were examined. Figures 1 and 2 depict the effect of ozone exposure on lung inflammation. The total inflammatory cells in the bronchoalveolar lavage fluid (BALF) increased by ~3-fold (Figure 1A) and cellular component analysis suggested macrophage, neutrophil, eosinophil, and lymphocytes all increased (Figure 1B). 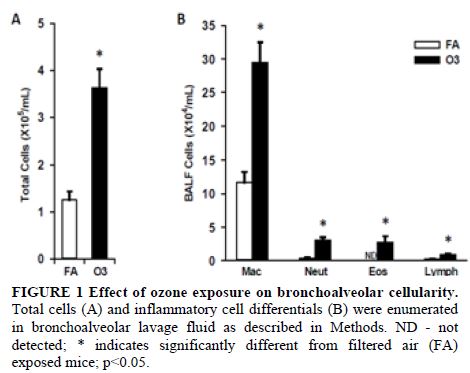 Histological examination confirmed the infiltration of immune cells in the airway. Ozone-exposed KK mice had pulmonary histopathology that was restricted to centriacinar regions throughout the lung lobe compared to FA-exposed mice (Figures 2A & 2B). These ozone-induced lung lesions were morphologically characterized by marked thickening of terminal bronchioles and proximal alveolar ducts as a result of hyperplasia/hypertrophy of surface epithelium, intramural fibrosis, smooth muscle hypertrophy and a mixed inflammatory cell infiltrate (i.e., mononuclear cells, neutrophils and eosinophils; bronchiolitis/alveolitis). Conspicuous aggregates of monocytes/macrophages and lesser numbers of other inflammatory cells (i.e., neutrophils, eosinophils, and lymphocytes) also were present in centrinacinar airspaces. No exposure-related histopathology was found in the lungs of KK mice exposed only to filtered air (Figure 2A). These results are depicted in Figure 2. After 3 weeks of exposure, there were no differences in body weight between the O3- and FA-exposed animals (Figure 3A). Although no significant difference in fasting blood glucose was observed between FA- and O3-exposed animals (Figure 3B), three-week O3 exposure significantly impaired insulin sensitivity in KK mice (Figure 3C & 3D, p<0.05). Fasting plasma insulin levels were lower in O3-exposed mice (4.5 ± 0.6 ng/mL vs. 2.7 ± 0.4 ng/mL for FA vs. O3, p<.05, Figure 3E). Consistent with these observations, fasting plasma leptin level and HOMA-beta were also reduced after O3 exposure in KK mice (Figures 3F & 3G). 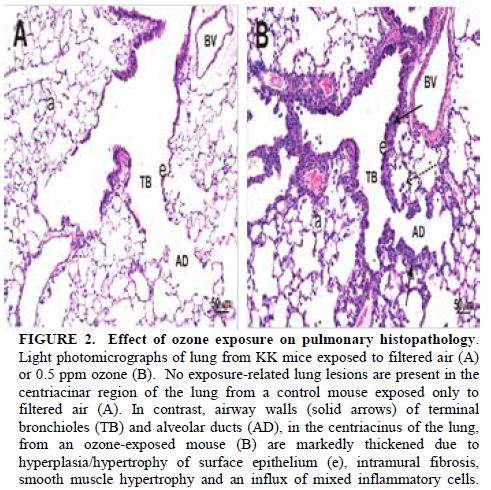 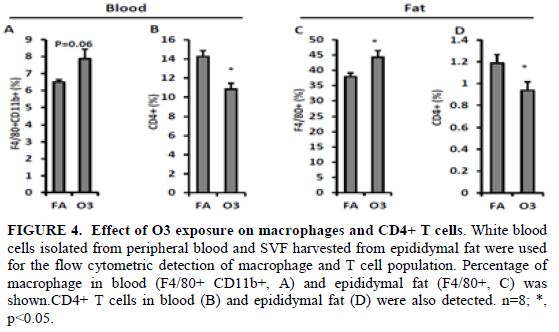 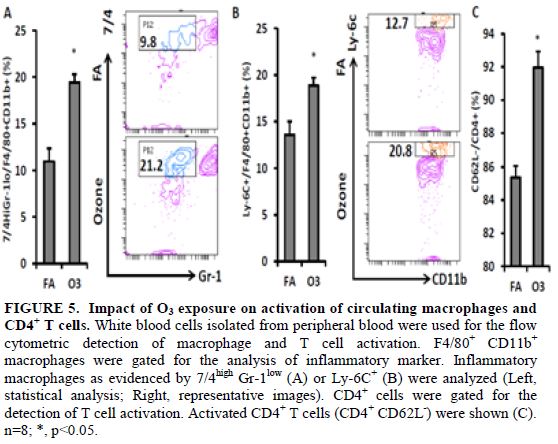 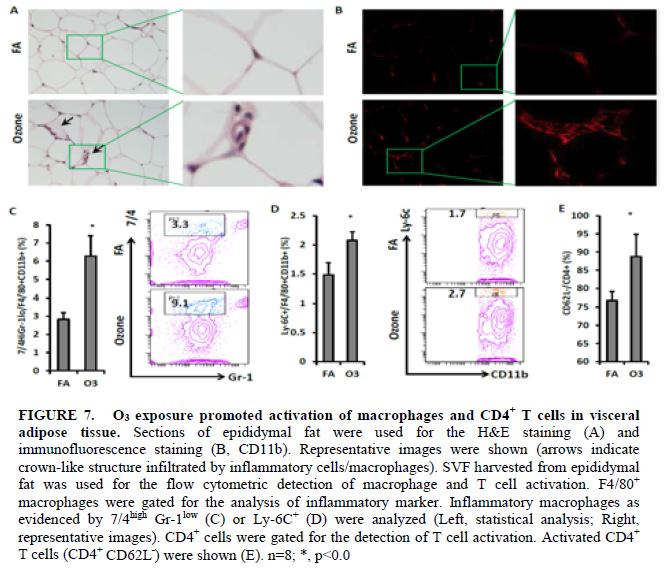 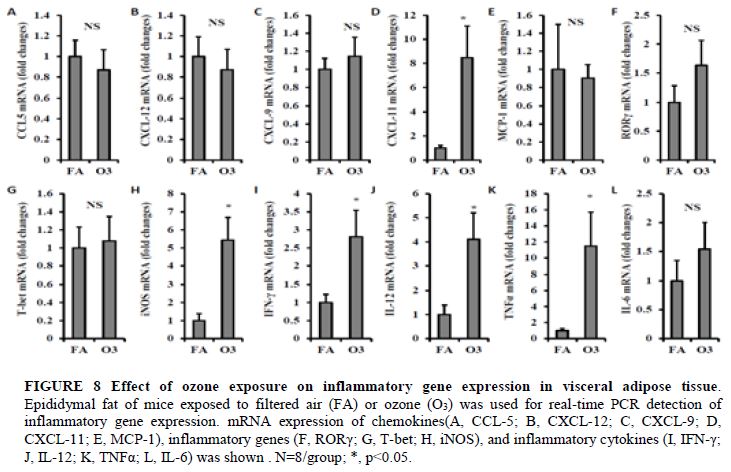 To investigate whether oxidative stress plays a role in ozone exposure, we detected the expression of genes involved in oxidative stress. As depicted in Figure 9, multiple oxidative stress-related genes including COX4 (1.0 ± 0.16 vs. 2.9 ± 0.71 for FA vs. O3, p=0.021, Figure 9B), COX5α (1.0 ± 0.16 vs. 2.0 ± 0.34 for FA vs. O3, p=0.016, Figure 9C), SCD1 (1.0 ± 0.18 vs. 3.1 ± 0.93 for FA vs. O3, p=0.041, Figure 9E), Nrf1 (1.0 ± 0.24 vs. 2.6 ± 0.52 for FA vs. O3, p=0.014, Figure 9F), and Nrf2 (1.0 ± 0.17 vs. 1.8 ± 0.36 for FA vs. O3, p=0.045, Figure 9G) were up-regulated by the exposure of O3. These results seem to suggest a dissociation of measures of inflammation in the circulation and tissue niches such as adipose from systemic insulin resistance in the context of a lean phenotype. This is to our knowledge the first description of a phenotype where there were seemingly reciprocal effects on inflammation and insulin resistance. Our results further seemed to suggest that the effects of ozone in conjunction with PM2.5 may indeed be complex with prediction of a phenotype rendered difficult by these opposing influences. These data indicate that the combined effects of a mixture may be far more complex than a simple additive or synergistic interaction. We have further examined Akt phosphorylation levels in liver and skeletal muscle and found that ozone-exposed animals had significantly increased Akt phosphorylation levels in liver and skeletal muscle but not in adipose tissues, suggesting that ozone exposure increases insulin sensitivity in hyperglycaemic KKAy mice. In our experiments for the coming year we plan on performing experiments with co-exposure with careful assessment of the phenotypes of individual component exposure to compare and contrast the effect of co-exposure.

All aspects of the study protocol are approved by our IACUC. We anticipate beginning our CAPS + Ozone exposure this year.
Journal Articles on this Report : 15 Displayed | Download in RIS Format