National Ambient Air Quality Standards (NAAQS) for PM2.5 have improved public health with economic benefits that more than cover the costs of the control programs themselves. Nevertheless, the competitive global market requires even greater efficiency in the future. Identification of especially toxic size fractions, sources, or chemical species within PM2.5 would enable the design of effective emissions control programs with reduced cost. Innovative methods are needed to pre-screen potentially toxic components of PM2.5 so that only the most promising candidates can be targeted for measurements. The latest generation of Chemical Transport Models (CTMs) can satisfy this requirement by supplying greatly improved estimates for particle concentrations, composition, and source contributions for epidemiological studies at a fraction of the cost required for measurements.

Existing air quality models such as CMAQ and the UCD/CIT model were refined to provide source apportionment results in multiple size fractions for primary and secondary PM components. New models were developed to perform simultaneous source apportionment for ~1,000 sources of primary PM. Seven years (2000-06) of air quality simulations were performed for the eastern United States and California with 4 km spatial resolution and daily time resolution. Model performance was compared to all available measurements to identify the PM size fractions, chemical components, and sources that were suitable for inclusion in epidemiological studies.

Model Results: Model calculations for PM2.5 in the eastern United States generally met accepted performance criteria but were judged to be not sufficiently accurate for incorporation into epidemiological studies with the cohort of over 6,000 people from the Multi-Ethnic Study of Atherosclerosis and Air Pollution (MESA). The epidemiological analysis was therefore prioritized to focus on California where the air pollution calculations were more reliable and where model results were available for novel features such as PM0.1 sources and components. A comprehensive comparison between monthly average model results and available measurements in California yielded Pearson correlation coefficients (R) ≥ 0.8 at ≥ 5 sites (out of a total of 8) for elemental carbon (EC) and nine trace elements: potassium, chromium, zinc, iron, titanium, arsenic, calcium, manganese, and strontium in the PM2.5 size fraction (Table 1). Longer averaging time increased the overall R for PM2.5 EC from 0.89 (1 day) to 0.94 (1 month), and increased the number of species with strong correlations at individual sites. Predicted PM0.1 mass and PM0.1 EC exhibited excellent agreement with measurements (R = 0.92 and 0.94, respectively). A total of 151 PM2.5 sources and 71 PM0.1 sources contained PM elements that were predicted at concentrations in general agreement with measured values at nearby monitoring sites.

The exposure estimates generated by the model calculations can be used in epidemiological studies that take advantage of differences in space or time to identify associations with important features of the PM size distribution. Figure 1 illustrates the spatial distribution of PM0.1 concentrations averaged over the entire 7-year analysis period (2000-06) in California. Figure 2 illustrates the average annual profile of source contributions to PM0.1 mass at Los Angeles. Contrasts within both of these plots provide examples of just some of the features that can be exploited by the exposure estimates produce by the model predictions. 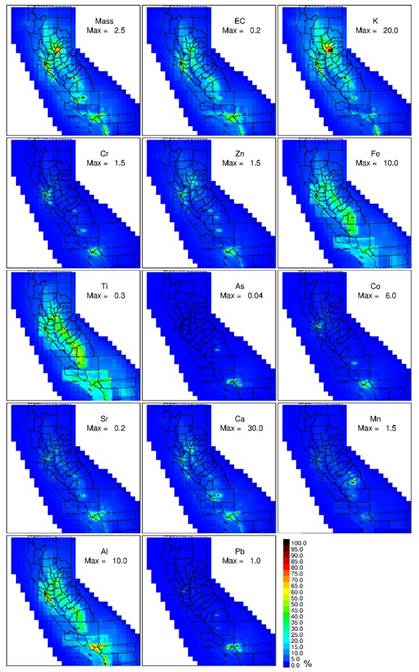 Figure 2. Annual variations of predicted source contributions from the top 30 constrained sources to primary PM0.1 mass at the Los Angeles site.
Epidemiological Results: Associations between air pollution and health effects were studied in a cohort of over 100,000 women from the California Teachers Study (CTS) using a Cox proportional hazards model. Several statistically significant associations between PM2.5 and ischemic heart disease (IHD) mortality were observed including PM2.5 mass, elemental carbon (EC), copper (Cu), and secondary organics and the sources gas- and diesel-fueled vehicles, meat cooking and high sulfur fuel combustion. The hazard ratio estimate of 1.19 (95% CI = 1.08,1.31) for 10 µg/m3 of PM2.5 is similar to previous findings from the American Cancer Society cohort. 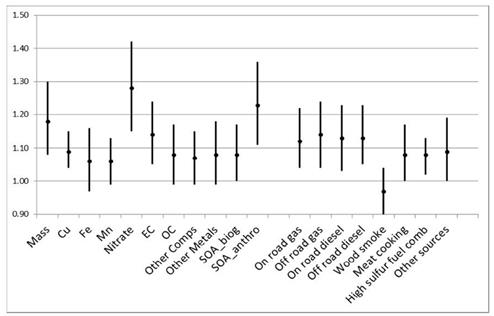 Associations were also found between IHD and several ultrafine components including EC, Cu, metals and mobile sources. The results suggest that the model successfully provided estimates of long-term exposure to fine and ultrafine species and sources at a 4km spatial resolution, and helped identify their relative toxicity. Several of the PM species generated greater risk estimates than that of PM mass itself.

# Besides Cu, Fe, and Mn; S1-S8 indicate sources of primary particles
Exposure estimates in California were also used to study associations between air pollution and health effects in a cohort of over 1,100 people from the Multi-Ethnic Study of Atherosclerosis and Air Pollution (MESA). No statistically significant associations were found between predicted PM0.1 exposure and coronary artery calcium and intima media thickness.

Further work should be performed to verify the ability of chemical transport models to provide realistic exposure assessments for fine and ultrafine particles. These models should then be further utilized to identify specific components and/or sources of PM2.5 and PM0.1 that are highly associated with adverse health effects.

All California model results included in the current report can be downloaded free of charge at http://faculty.engineering.ucdavis.edu/kleeman/ Exit .