The project had four initial aims:

Aims of this research project are carried out in a collaborative manner by two laboratories, the Faustman Laboratory and the Costa Laboratory. Studies and results are reported herein for these joint efforts.
In the years preceding this latest funding cycle, Dr. Costa’s laboratory had been exploring novel mechanisms by which OP insecticides may adversely influence brain development. Two important findings were that OPs were able to inhibit proliferation of astrocytes, particularly in the presence of mitogens such as carbachol (an analog of acetylcholine) (Guizzetti, et al., 2005), and that the cytotoxicity of OPs on neurons was due to their ability to induce oxidative stress (Giordano, et al., 2007). For this latter study, we utilized an in vitro system consisting of cerebellar granule neurons (CGNs) isolated from wild-type mice (Gclm +/+) or from mice lacking the modifier subunit of glutamate cysteine ligase (Gclm -/-), the first and limiting step in the synthesis of glutathione. These neurons display very low levels of glutathione and are more susceptible to the toxicity of agents that increase oxidative stress.
During the same period, the Costa Laboratory studied the interactions of astrocytes and neurons in mediating chemical toxicity. Various in vitro systems were implemented to study such interactions, and a preliminary characterization of a number of parameters was carried out. Rat cortical or hippocampal astrocytes, when co-cultured with hippocampal neurons, increase their differentiation, and stimulation of astrocytes with carbachol greatly enhances their ability to induce neuritogenesis. This effect is mediated by an effect of carbachol on the expression and release of at least three neuritogenic factors: fibronectin, laminin, and PAI-1 (Guizzetti, et al., 2008). Ethanol can interfere with muscarinic receptor signaling in astrocytes and inhibit their ability to foster neuritogenesis in hippocampal neurons (Guizzetti, et al., 2010). More germane to this project is the finding that manganese, by accumulating and causing oxidative stress in astrocytes, inhibits their ability to induce neuritogenesis in hippocampal neurons (Giordano, et al., 2009).
These initial findings obtained with OPs or with other compounds served as the basis for some of the hypotheses and the specific aims indicated above.
The first series of studies sought to investigate whether the widely-used OP diazinon (DZ) and its oxygen metabolite diazoxon (DZO) would affect glial-neuronal interactions as a potential mechanism of developmental neurotoxicity. Specifically, the effects of DZ and DZO on the ability of astrocytes to foster neurite outgrowth in primary hippocampal neurons were investigated (Pizzurro, et al., 2014a). The results showed that both DZ and DZO adversely affect astrocyte function, resulting in inhibited neurite outgrowth in hippocampal neurons. This effect appears to be mediated by oxidative stress, as indicated by OP-induced increased reactive oxygen species production in astrocytes and prevention of neurite outgrowth inhibition by antioxidants. The concentrations of OPs were devoid of cytotoxicity and cause limited acetylcholinesterase inhibition in astrocytes (18 and 25% for DZ and DZO, respectively). Among astrocytic neuritogenic factors, a most important one is the extracellular matrix protein fibronectin. DZ and DZO decreased levels of fibronectin in astrocytes, and this effect also was attenuated by antioxidants. Underscoring the importance of fibronectin in this context, adding exogenous fibronectin to the co-culture system successfully prevented inhibition of neurite outgrowth caused by DZ and DZO. These results indicate that DZ and DZO increase oxidative stress in astrocytes, and this in turn modulates astrocytic fibronectin, leading to impaired neurite outgrowth in hippocampal neurons.
A second series of studies focused again on DZ and DZO and explored their ability to directly impair neurite outgrowth in rat primary hippocampal neurons as a mechanism of developmental neurotoxicity (Pizzurro, et al., 2014b). Both DZ and DZO (0.5–10 μM) significantly inhibited neurite outgrowth in hippocampal neurons at concentrations devoid of any cyototoxicity. These effects appeared to be mediated by oxidative stress, as they were prevented by antioxidants (melatonin, N-t-butyl-alpha-phenylnitrone and glutathione ethyl ester). Inhibition of neurite outgrowth was observed at concentrations below those required to inhibit the catalytic activity of acetylcholinesterase. The presence of astrocytes in the culture was able to provide protection against inhibition of neurite outgrowth by DZ and DZO. Astrocytes increased neuronal glutathione (GSH) in neurons, to levels comparable to those of GSH ethyl ester. Astrocytes depleted of GSH by L-buthionine-(S,R)-sulfoximine no longer conferred protection against DZ- and DZO-induced inhibition of neurite outgrowth. The findings indicate that DZ and DZO inhibit neurite outgrowth in hippocampal neurons by mechanisms involving oxidative stress, and that these effects can be modulated by astrocytes and astrocyte-derived GSH. Oxidative stress from other chemical exposures, as well as genetic abnormalities that result in deficiencies in GSH synthesis and regulation, may render individuals more susceptible to these developmental neurotoxic effects of OPs.
In conjunction with Dr. Costa, Dr. Faustman’s laboratory also has been examining developmental neurotoxic effects of OPs. In vitro models of neuronal differentiation are emerging as an important tool for high throughput and high content screening in neurodevelopmental toxicology. Understanding when, how, and at what doses neurotoxicants exposures affect normal development is critical for our ability to predict impacts of exposures before populationwide exposures occur. To further explore the importance of developmental context and timing in neurotoxicity, we exposed human neuronal progenitor cells (hNPCs) grown in proliferating and differentiating conditions to CP and arsenic (As), two well established neurotoxicants. The effects of CP or As treatment on hNPC morphology and cell viability were measured 24 hours and 72 hours post-treatment; at 72 hours post-treatment, changes in protein expression levels of neural differentiation and cell stress markers, cell viability and histone H3 modifications were observed (Figures 1 and 2). Cell viability, differentiation status, and epigenetic results suggest that hNPC cultures respond to CP and As treatment with different degrees of sensitivity, dependent on differentiation/proliferation status and on the toxicant concentration and length of exposure. Toxicant-related responses in sensitivity and protein expression patterns of neuronal markers that occurred 72 hours post-treatment were dependent on the cell growth conditions. Histone modifications, as measured by changes in histone H3 phosphorylation, acetylation, and methylation, varied for each toxicant and growth condition, suggesting that differentiation status can influence the epigenetic effects of CP and As exposures (Figure 2). 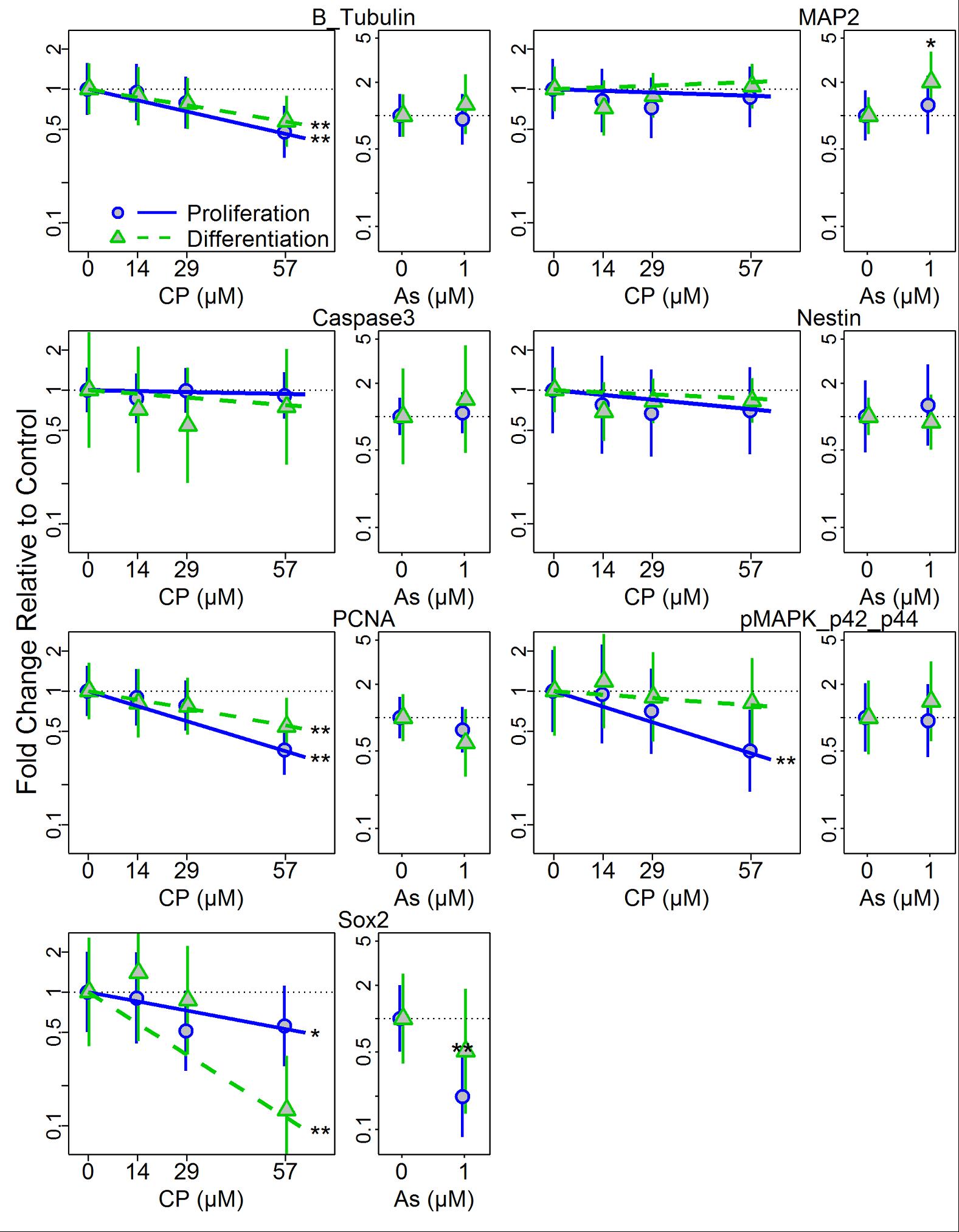 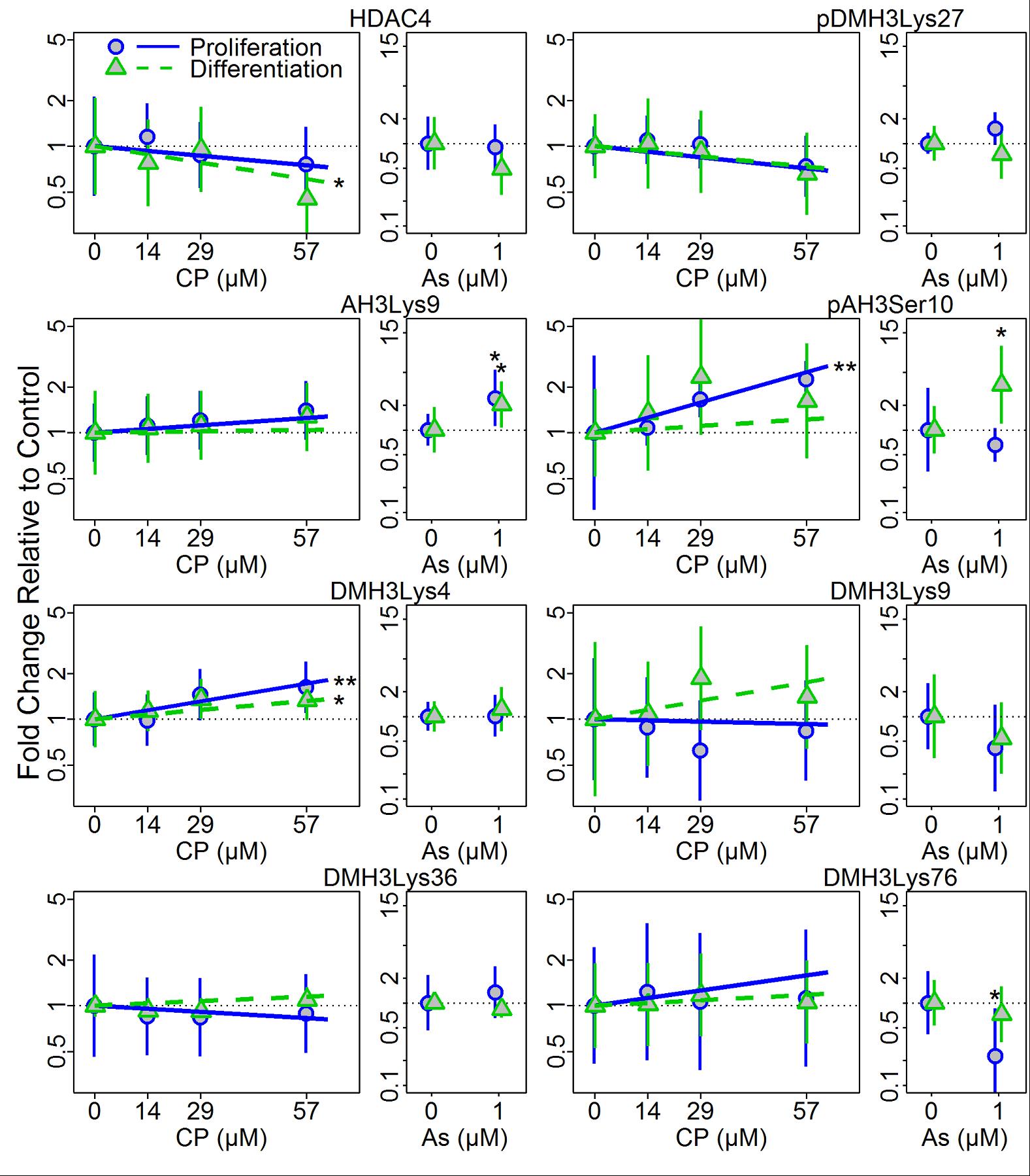 Figure 2. Changes of histone H3 acetylation and methylation following CP and As treatment of hNPC cultured under proliferation and differentiation conditions at 72 hours post-treatment. Histone modifications at specific sites were quantified by western blotting following 72 hours treatment with CP or As under proliferating or differentiating conditions. Plots show means and 95 percent confidence intervals. * = p < 0.05; ** = p < 0.01. 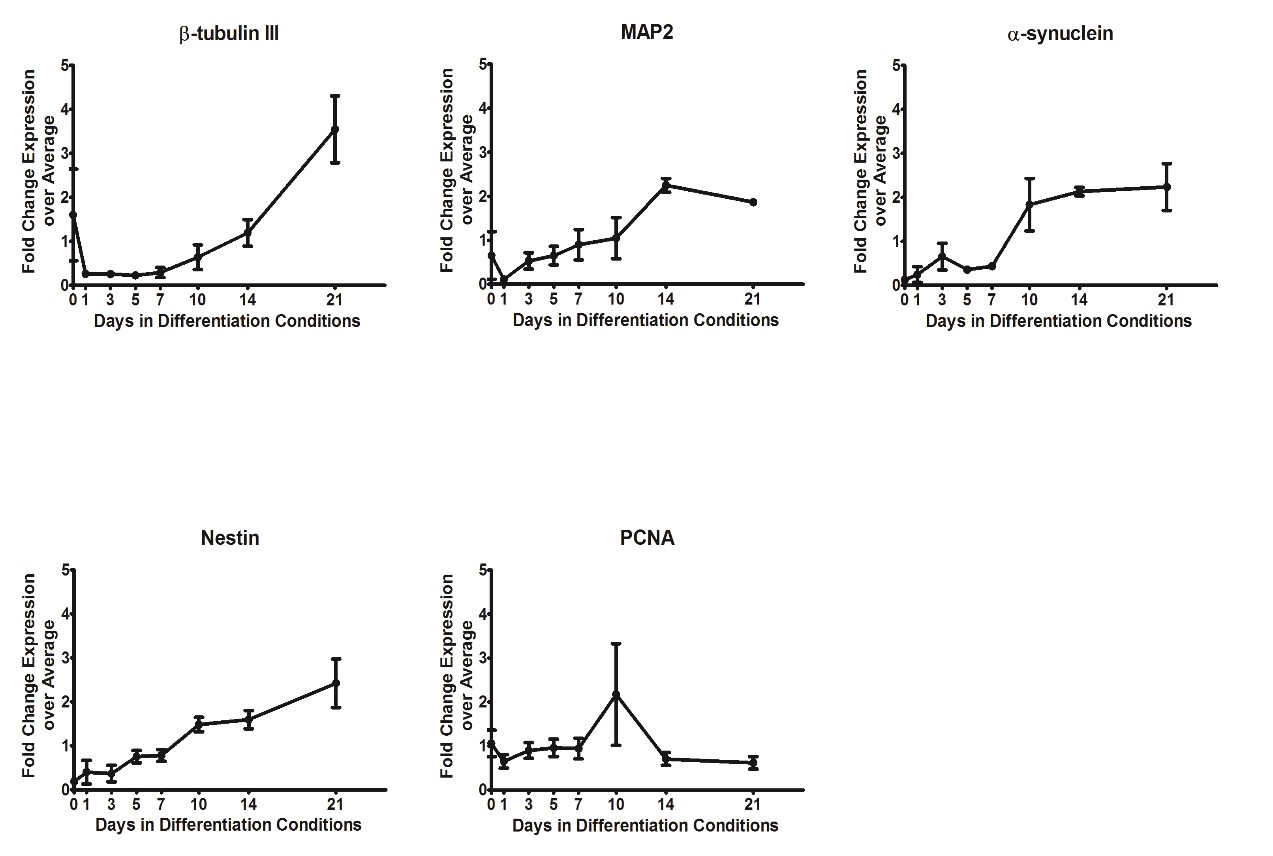 Figure 4. Protein expression in differentiating hNPC cultures through time. Protein was harvested from differentiating hNPCs and expression of specific markers was evaluated by western blotting, with equal amounts of protein loaded in each sample. Data are normalized to Actin expression and presented as fold change expression intensity at each time point over expression average across time and reflects results of three independent experiments. Error bars indicate standard error. β-tubulin III, MAP2, α-synuclein, and nestin expression all increase significantly over time (one-way ANOVA p < 0.05).

We compared gene expression in vitro with publicly available gene expression data from developing human brain tissue in vivo and found substantial concordance in relative gene expression intensity (Figure 5). Genes highly expressed in both samples were enriched for key processes of brain development, including proliferation, migration, differentiation, synapse formation, and neurotransmission (Table 1). Conversely, GO terms enriched among genes highly expressed only in vivo or only in vitro reveal important differences between systems. For example, genes highly expressed in vitro are enriched for more stress and apoptosis pathways. This analysis provides a timeline of progression through differentiation, facilitating identification of key phases of sensitivity in vitro. Key processes important for the identification of Adverse Outcome Pathways (AOPs) of proliferation, differentiation, and functional maturation matched in vivo patterns (Table 1). Given the heightened sensitivity of the brain to toxicant perturbation during critical windows of development, it is important that we understand which sensitive developmental pathways are captured in vitro and which are not so that in vitro assays can be interpreted appropriately. These observations of morphology, protein, and gene expression provide a timeline of progression through differentiation, facilitating identification of key phases of sensitivity. By anchoring in vitro dynamics to in vivo reference points, this work clarifies the extent to which fundamental processes of brain development are captured in our model.

Significance
The focus of the Faustman and Costa laboratories is to understand the potential for and magnitude of impacts of pesticides on neurogenesis and gliogenesis. In both these essential neurodevelopmental pathways the balance between initial proliferation and subsequent specific differentiation is integral for proper neurodevelopment. In this project, critical molecular pathways facilitating proliferation and toxicant response are being investigated. Knowledge about the timing and sensitivity of these critical pathways will directly translate into information relevant for establishing conditions promoting environmental and public health safety.
By anchoring in vitro gene expression dynamics to in vivo dynamics, the analysis above begins to define the appropriate applications of Dr. Costa’s in vitro model of neuronal differentiation for developmental neurotoxicology. The neuronal differentiation model evaluated here captures several essential processes of early brain development in vivo, including neuronal differentiation and development, neuronal migration, synapse formation, and neurotransmission. This model also captures several generic developmental pathways important throughout development. For example, pathway analysis revealed activity in signal transduction pathways and general differentiation and morphogenesis processes that are ubiquitous in development. Detection of perturbation of generic developmental pathways in this model may be able to predict perturbation in a broader set of developmental contexts.
Taken together, Dr. Faustman’s results support the idea that dose, time, and biological context are important factors that need to be considered when developing in vitro models for toxicity testing, interpreting results, and comparing findings across endpoints and platforms.
Key Center Findings Related to the Molecular Mechanisms Project:
Plans
During the no-cost extension, the Faustman and Costa laboratories continued with their investigations to support the aims of the Molecular Mechanisms project and publish drafted manuscripts.