The overall objective is to improve our understanding of environmental exposure-dose pathways of CeO2 NPs. The Specific Aims are:

Cerium oxide (CeO2) is an important material in numerous applications, including as a fuel additive to suppress particulate formation in diesel fuel, in particulate after-treatment systems, more recently in biomedical applications such as in cancer and retinal treatments, and in many other applications. This increased use of CeO2, increases the opportunity for exposure to CeO2 nanoparticles and modeling, has predicted that the use of cerium additives in diesel fuel will significantly increase the ambient air levels of CeO2 and in particular of CeO2 nanoparticles. Cerium is the most reactive of the rare earth metals, easily oxidizing at room temperature and forming a variety of metal salts, such as sulfates, nitrates, and oxides. In complex atmospheric media, the coexistence of pollutant gases and particles raises the concern that these pollutants may interact chemically to result in secondary products that may be more toxicologically active or that may be transported to sensitive organs, thus the need to understand the potential aging and characterize the changes in properties of CeO2 nanoparticles with interaction. Another area in which research is needed is to determine the extent to which and the pathways by which both freshly combusted and aged CeO2 NPs become bioavailable, potentially bioaccumulate, and translocate from point of exposure to target organs .

To address these needs, we set up the present project with the following three complementary aims (Figure 1). After generating CeO2 NPs in the University of Michigan combustion synthesis (UMCS) facility, freshly-combusted CeO2 NPs were aged by exposure to UV radiation and atmospheric pollutants in a unique photochemical simulation chamber. For aim 1, assorted analytical methods were used to characterize the combusted CeO2 materials, with and without aging by UV exposure. For aim 2, we conducted in vivo inhalation exposure studies using male rats. NP concentrations were measured by ICP-MS at multiple times in blood, liver, spleen, kidney, heart, lungs, brain, gastro-intestinal tract, urine and feces. A mass balance and kinetic analysis of CeO2 NPs was carried out on rat tissue exposed by inhalation. Finally, for aim 3, we developed and parameterized a multiscale in silico computer model for CeO2 NPs in male rats to understand biodistribution in the body. This model is composed of a macrophage uptake submodel embedded within a 10-compartments PBTK model. In a second stage, the same model was re-parameterized and applied to multiple types of nanoparticles, including silver, gold, titanium dioxide, pegylated polyacrylamide, uncoated polyacrylamide, poly(Lactide-co-glycolide)-monomethoxypoly (ethyleneglycol) and coated breviscapine-loaded poly(D, L-lactic acid) inhaled or intravenously injected NPs. The model also was used to identify the most critical parameters determining NPs bioavailability.

The next sections of this summary reports first describe the overall experimental setup and then provide results and achievements for each of the three specific aims on (1) Environmental transformation and uptake of freshly combusted and aged CeO2, (2) in vivo biological fate of CeO2 NPs and (3) In silico PBTK modeling of CeO2 and other NPs . 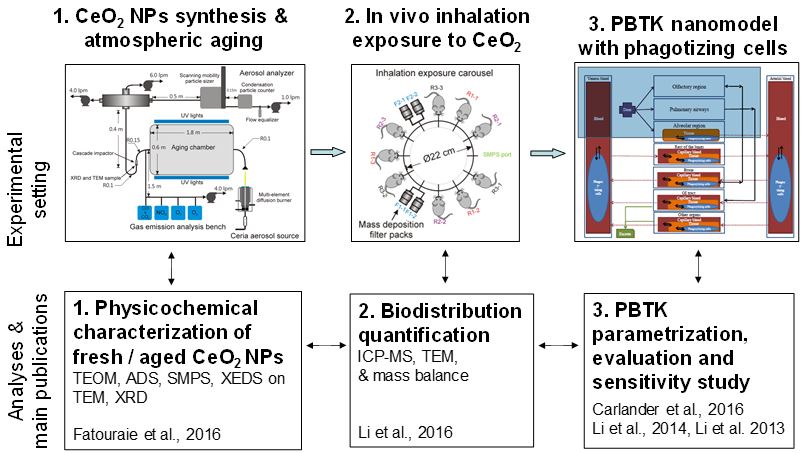 Figure 1. Overview of the experimental design, analyses and related publications.

Figure 2 shows the experimental apparatus consisting of a nanoparticle generation facility, a photochemical aging chamber, a series of instruments to characterize the aerosol flow, and a nose-only inhalation exposure chamber for rats . 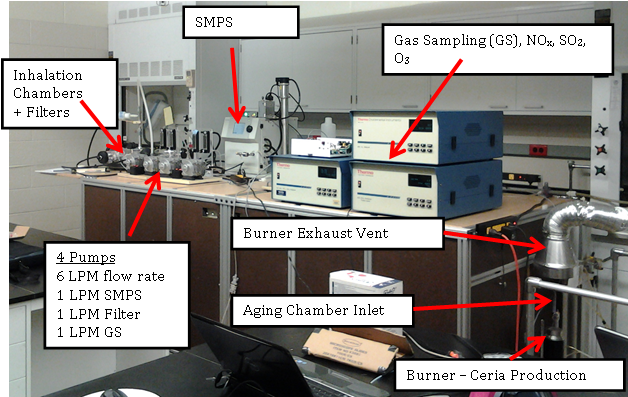 Generation of CeO2 nanoparticles: CeO2 nanoparticles were generated operating continuously at the UMCS facility using a multi-element H2/O2 diffusion flame burner to provide a high-temperature oxidizing environment for cerium acetate precursor decomposition, oxidation, and particle formation. Photochemical chamber: The atmospheric reaction chamber is a 500-L fluorinated ethylene propylene Teflon bag with thirty (UVA-340) fluorescent lamps to simulate sunlight with ~250 W/m2 of direct UV flux in the short wavelength region from 365 nm to the solar cutoff of 295 nm. For the aging process, the lamps were turned on simultaneously with the generation and exposure of CeO2 nanoparticles. Nanoparticle characterization: A scanning mobility particle sizer (SMPS) with an electrostatic classifier was used to monitor the aerosol number density and particle size distribution as a function of time during the animal exposure studies. The SMPS uses a particle size impactor filter to remove particles >~0.5 µm in size. Additionally, a three-stage cascade impactor filter was incorporated after the photochemical chamber, upstream of the exposure carousel, filter packs and SPMS, to remove larger particles and agglomerates >~0.5 µm in size. The average mass concentrations calculated from SMPS were compared with the physical sampling measurements by four filter packs attached to two ports of the exposure chamber to determine the total nanoparticle mass deposited during sampling times corresponding to the exposure studies. Transmission electron microscopy (TEM) was performed at the University of Michigan electron microbeam analysis laboratory using a high resolution electron microscope in order to characterize the morphology and size distribution of the nanoparticles. Bulk properties such as crystalline structure and the average crystallite size were analyzed using powder x-ray diffraction (XRD). Gas sampling (GS) was used to measure the NOx, CO, O3, and CO2 levels in the carrier gas of nanoparticles. These gases were by-products of the combustion process used to generate the ceria nanoparticles, and also represent gases found at ambient conditions in urban environments. Additional measurement of post combustion O2 levels were performed using an emission analyzer to ensure the oxygen was at atmospheric levels, i.e. near 20-22% on a mole fraction basis.

Main results are summarized below and the related hypotheses successively discussed for each of the three specific aims.

The Physiologically-Based Toxicokinetic (PBTK) model was parametrized based on the inhalation biodistribution experiments from Table 1.

Figure 4 shows the evolution of model predictions for the nanoparticles and compares the results with the observed data for the feces (cumulated data), the lungs and the extrapulmonary organs. The model results were able to reproduce the different observed trends. The CeO2 nanoparticle levels in the lungs increase rapidly during the exposure period, peak at the end of exposure, and then slowly decrease over time. After eight hours of delay, cumulated CeO2 nanoparticles amounts in the excreted feces increase rapidly until around the third day after exposure, before entering a phase of much slower increase. The amount of CeO2 nanoparticles in the extrapulmonary organs is much smaller than in the feces and lungs. The amount of nanoparticles increase quickly during the exposure period like what is seen in the lungs, but keep increasing after exposure until the end of the experiment in contrast to the decreasing levels in the lungs.

As illustrated in Figure 4, the model predictions for the four runs in this study fit generally well with measured data (R2 ranged from 0.85 to 0.93). The GSD2 ranged from 4.5 to 11.5, indicating the accuracies of predictions of individual data points is of maximum one order of magnitude compared with the variation of four orders of magnitude differences between all organs and time points. Overall, The PBTK model predicted the biodistribution well and identified phagocytizing cells in the pulmonary region accountable for most of the nanoparticles not eliminated by feces. 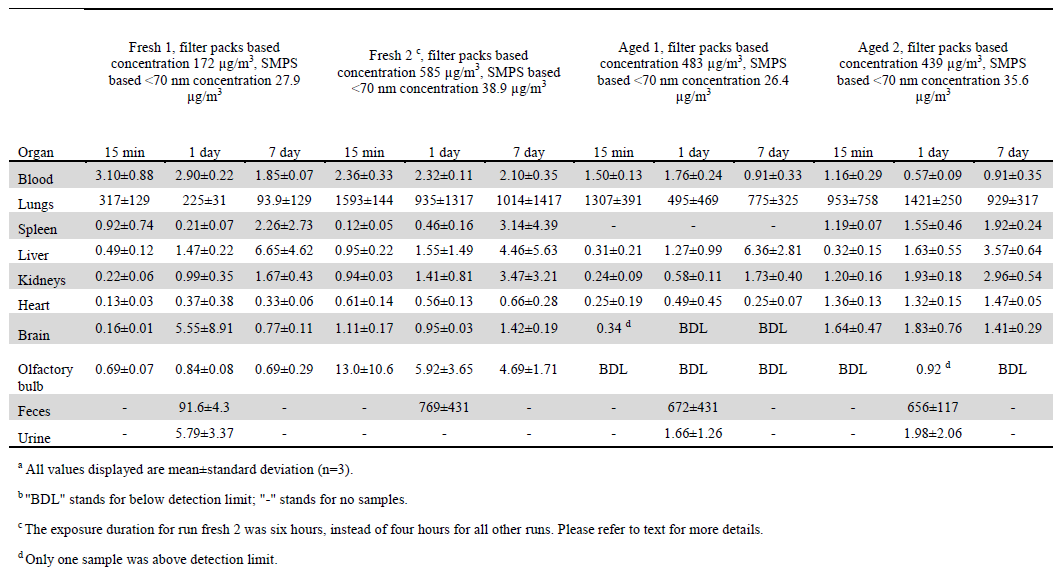 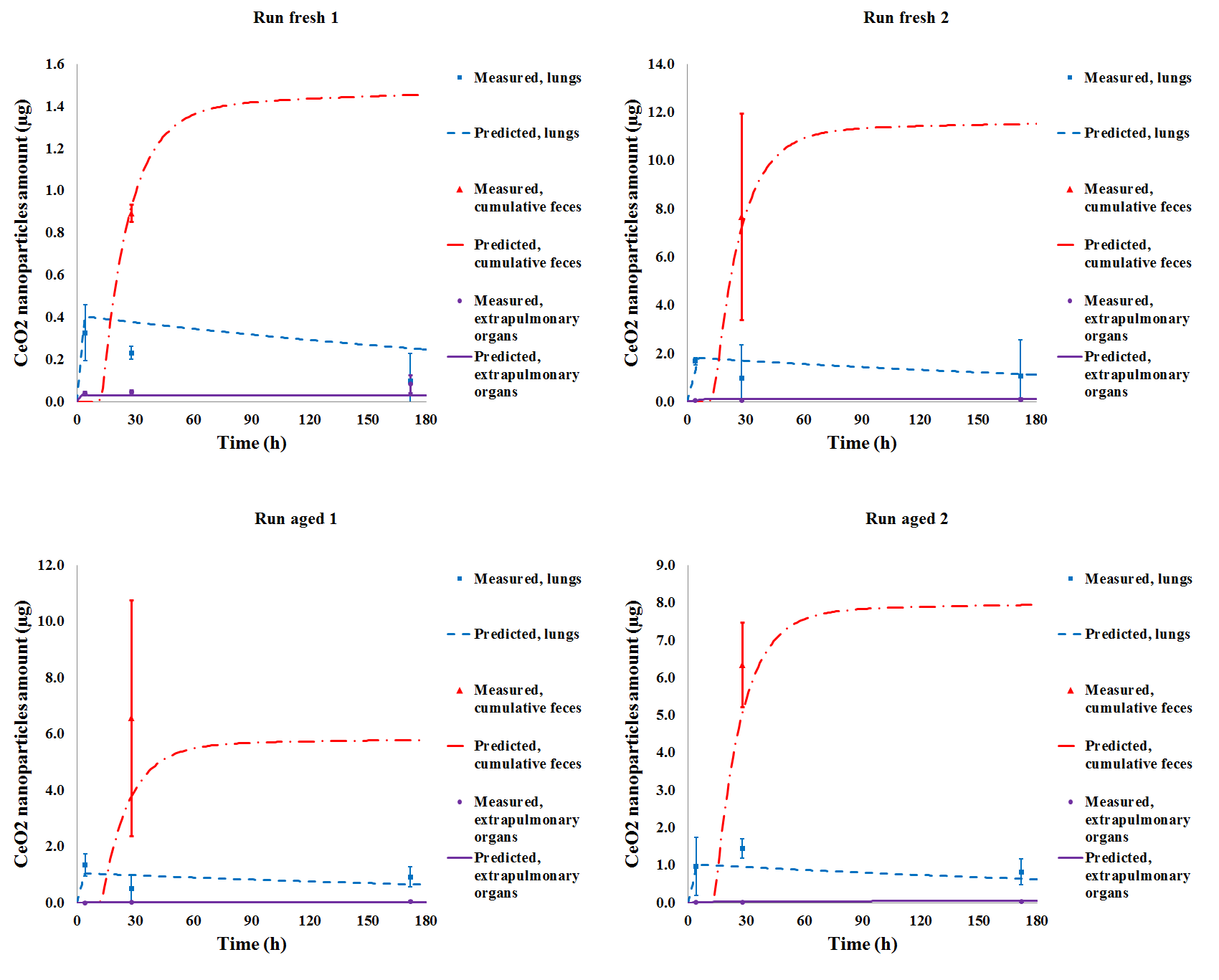 The same model also was re-parameterized and applied to multiple types of nanoparticles, including silver, gold, titanium dioxide, pegylated polyacrylamide (PAA-peg), uncoated polyacrylamide (PAA), poly(Lactide-co-glycolide)-monomethoxypoly (ethyleneglycol) (PLGA-mPEG) and coated breviscapine-loaded poly(D, L-lactic acid) (BVP-PLA) inhaled or intravenously injected NPs. As an example, Figure 5 displays for four types of plastic nanoparticles the log10 values of predicted concentration in each organ against the log10 of corresponding measured values. The R2 ranged from 0.86 to 0.97, indicating that the model predicted the experimental data relatively well across the different organs. The model also was used to identify the most critical parameters determining NPs bioavailability. Key determinants of the nanoparticles biodistribution are the uptake capacities of phagocytizing cells in organs, the partitioning between tissue and blood, and the permeability between capillary blood and tissues. This framework can be extended to other types of nanoparticles by adapting these determinants . 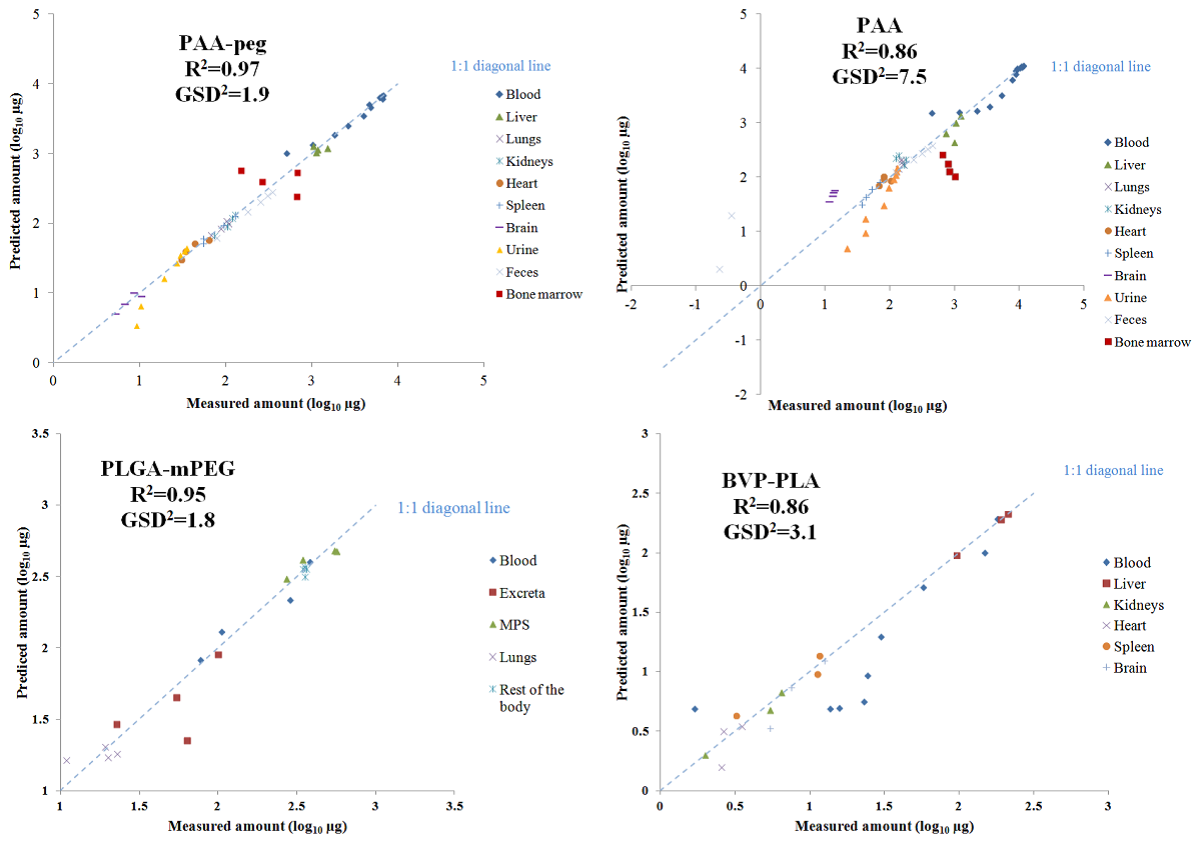 Figure 5. Log10 of predicted nanoparticles amount as a function of log10 of measured amount for four types of plastic nanoparticles

The ceria nanoparticles were characterized using SMPS to determine the particle size distribution, using XRD to determine crystalline phase and average crystallite size and using TEM to determined morphology and characteristic size of the primary particles and agglomerates. The results indicate negligible differences between the aged and fresh nanoparticles based on the measured parameters. Surface functionality may have changed between the fresh and aged CeO2 particles; however, the results of the biodistribution data indicate the nanoparticle uptake was unaffected by fresh versus aged particles. The effects of ambient aging of CeO2 particles documented in the literature were for CeO2 particles co-produced with soot and highly agglomerated in the soot structures. By comparison with the current work, the results indicate CeO2 may require co-pollutants to affect the nanoparticle formation and growth, and that once formed pure CeO2 nanoparticles are stable in the crystalline phase and primary particle size .

Future work of considerable interest would be biodistribution studies of fresh and aged CeO2 nanoparticles co-produced with soot.

To our knowledge, this was the first in vivo inhalation exposure study to evaluate the biodistribution of freshly combusted and aged CeO2 NPs in a photochemical simulation chamber. This study showed no significant differences in biodistribution patterns between fresh and aged CeO2 NPs. Cerium was predominantly recovered in the lungs and feces, with extrapulmonary organs contributing less than 4% to the recovery rate at 24 hours post-exposure. This result suggests that only the smallest size fraction of CeO2 NPs can penetrate the alveolar wall and reach the extrapulmonary organs. As described above, future work should incorporate higher levels of exhaust co-pollutants (e.g. soot) to emulate the real-world emission scenarios of CeO2 NPs (e.g., as an additive to diesel fuel) .

Starting with available data on the biodistribution of nanoparticles in rats via intravenous injection, we have built the first PBTK model that can specifically account for nano-specific phenomena backed by detailed physiologic processes described in the model. This model was adopted to accommodate inhalation pathway with minimal changes to the model’s structure and parameters. The PBTK model successfully predicted the dynamic of the CeO2 nanoparticles in the various organs measured in this study and suggested most of the nanoparticles were captured by phagocytizing cells, which agrees with the literature. The model also identified the most influential parameters affecting the biodistribution of NPs were the partition coefficient between tissue and blood, the permeability coefficient between blood and tissue, and the maximum uptake rate by phagocytizing cells. As mentioned above, it was also found that the size distribution of NPs inhaled would largely determine the total amount of NPs that can enter into systemic circulation. Therefore, when applying this model to other NPs inhalation exposures, the exposure conditions including the size distribution of the NPs should be clearly defined as these would greatly affect model predictions .