The overall objective is to improve our understanding of environmental exposure-dose pathways of CeO2 NPs. Our Specific Aims are:
(1) Environmental transformation and uptake of freshly combusted and aged CeO2: characterize environmental transformation and physicochemical properties of aged CeO2 NPs using their interactions with UV radiation and ambient air co-pollutants, and compare them to freshly-combusted CeO2 NPs;
(2) In vivo biological fate of CeO2 NPs: determine the biological fate of freshly combusted and aged CeO2 NPs, comparing the concentrations in blood and target organs resulting from animal inhalation and intratracheal exposures; and
(3) In silico PBTK modeling of CeO2 NPs: develop and evaluate a Physiologically Based ToxicoKinetic (PBTK) model of CeO2 NPs to identify the main factors affecting translocation and distribution of CeO2 NPs in the body.

Work progresses according to the foreseen timeline, with the following specific achievements in this second project year:
1. Environmental transformation and uptake of freshly combusted and aged CeO2
(1a) System Integration: During the past year, the synthesis system was integrated with the aging chamber and placed in line with the animal exposure chambers, and the protocols for the supporting diagnostics were developed. Several practical problems were encountered: humidity buildup in the chamber, shrink in size of the aging chamber due to pressure lost, and uneven nanoparticle concentrations at different ports of the exposure chambers. These problems have been solved. Figure 1 shows the combined nano-ceria synthesis facility and aging chamber with the associated diagnostics for the aerosol flow. A scanning mobility particle sizer (SMPS) is used to monitor the aerosol number density and particle size distribution as a function of time during the animal exposure studies. Gas sampling (GS) is used to measure the NOx, SO2 and O3 levels in the aging chamber. These gases are used to simulate exposure of the particles to ambient conditions. Four pumps are used to control the flow rate to the inhalation chambers and to direct flow to the filter packs, the SMPS and the GS system. The filter packs are used to determine the total nanoparticles deposited over longer sampling times (e.g., 2-hour intervals). Figure 2 is a schematic of the aerosol delivery system and indicates where the aging gases are introduced to the flow and where the flow sampling occurs. Figure 3 shows the detail of the burner used to produce the ceria nanoparticles. 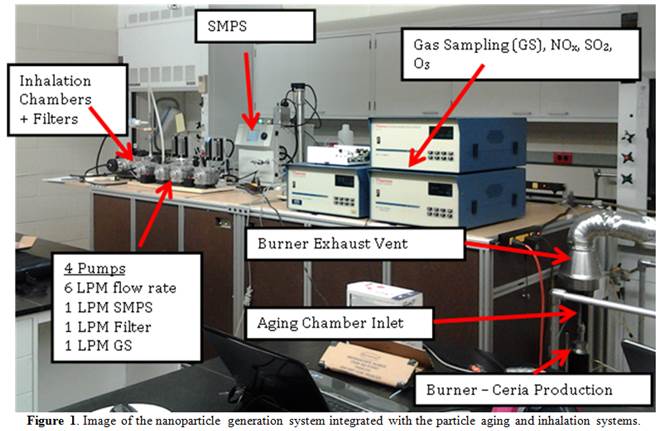 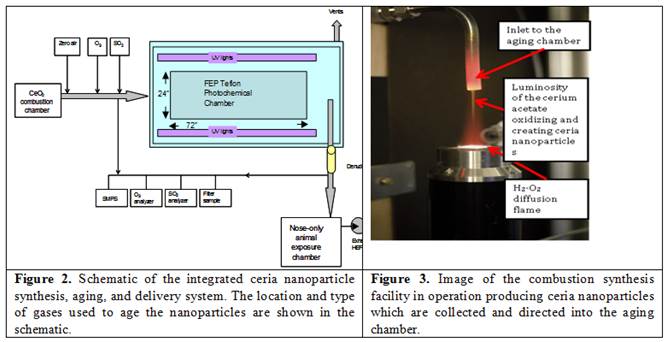 (1b) Atmospheric transformation of CeO2 NPs: During Year 2, we completed construction and testing of the exposure system and began aging nanoparticles using the UV lighting system. Rigorous experimental testing was performed to balance flow rates and minimize condensation and deposition of nanoparticles in the exposure system and in the multiple sampling ports (shown in Figure 2).
(1c) Characterization of CeO2 NPs: The number density and size distribution of the ceria nanoparticles generated using the University of Michigan combustion synthesis facility was determined using the SMPS, as noted above. Typical results for the nanoparticle concentration and average size during a characterization study are presented in Figure 4. The aerosol characteristics stabilize rapidly after the cerium acetate is introduced to the burner (~10:59 a.m.), and the system recovers quickly after the synthesis ends (~14:39). The average particle size varies by less than 20% from the temporal average of ~42 nm during the 4-hour test window. The number concentration is also very consistent. The effects of humidity and using the ultraviolet lights in the aging chamber have been determined in the characterizations studies. The SMPS data are combined with average crystallite size determined using x-ray diffractometry and morphology and size information obtained using transmission electron microscopy. These data indicate the rats are exposed to nanoparticles with consistent aerodynamic size and concentration throughout an exposure study.

2. In vivo biological fate of CeO2 NPs
Having completed testing of the exposure system and characterization of freshly generated nanoparticles, we began conducting in vivo studies. The preliminary results from the latest pilot animal exposure study are summarized in Table 1. We targeted the maximum achievable CeO2 concentration to optimize detection limits and our analytical technique for the biological samples. The average concentration during the pilot exposure was 10.2±1.2 mg/m3, and six laboratory rats were exposed to this concentration for up to 5 hours.
As shown in Table 1, two animals were sacrificed at three different post-exposure times.At the time of sacrifice, the rats were deeply anesthetized and exsanguinated. Immediately after death, all tissue materials were removed. All samples were weighed and acid-digested in concentrated nitric acid. Sample extracts were then diluted and analyzed for a suite of trace elements using inductively coupled plasmamass spectrometry (ELEMENT2, Thermo Finnigan, San Jose, CA).
Consistently with other recent studies, significant quantities of CeO2 nanoparticles were recovered from lung tissues of the animals. CeO2 nanoparticles are also observed in the liver for three out of four rats after 5 hours of exposure and necropsy taking place 15 minutes and 19 hours post exposure. These concentrations are low, however, 4,000 times less than the lung concentration, indicating a limited transfer from lung to systemic circulation. Concentrations in other organs were below limit of detection.

3. In silico PBTK model
(3a) Adaptation of the PBTK model to pulmonary exposure of CeO2 NPs
A manuscript describing the PBTK model developed during the 2011-2012 was submitted to Nature Nanotechonolgy. The PBTK model was adapted to include pulmonary exposure in 2012-2013. For pulmonary exposure, the alveolar region in the lungs takes up the majority of NPs. Then from the alveolar region, NPs are slowly released into the blood and distributed to other organs. Parts of the administrated dose may deposit in the upper airway and be swallowed into the GI tract before quickly excreted via feces. Also, it is possible that some NPs are transferred to the olfactory region and taken up by the brain directly, bypassing the blood-brain-barrier. According to the model, the phagocytizing cells are still responsible for storing the NPs in various organs. This adapted model was a parameterized rat experiment with intra-tracheal instilled CeO2 from a previous study (He et al., 2010). Figures 5 and 6 show the comparison between model predicted results and measured data.
(3b) Phagocytizing cell sub-module development
A phagocytizing cell sub-module proposed by Luciani et al. (2009) was adapted with the aim of expressing the phagocytizing cell uptake capacity for different types of NPs with the size and molecular weight of NPs. This project's in vitro study will provide required data to calibrate this sub-module for the CeO2 nanoparticles in this project.

The major objectives and tasks for project period 3 are summarized below:
(1) For the characterization of freshly combusted and aged CeO2, we will refine the XRD analysis for composition and expand to transmission electron microscopy to further characterize particle size and morphology. We will also use a scanning mobility analyzer to measure the particle size distribution. We will explore other methods such as FTIR and XPS to provide additional compositional information on the NPs. For in vitro uptake of nano-CeO2 by macrophage, we will conduct further comparisons of cellular responses to freshly generated and aged ceria NPs.
(2) The main focus of period 3 will be on the in vivo measurement of freshly combusted and aged nano-CeO2 fate in mice following inhalation, with the following tasks. We will first delay post-exposure sacrifice (> several days) to increase the likeliness to observe tissue distribution and clearance of CeO2 nanoparticles above limit of detection and test the uptake of aged nanoparticles. The experimental protocol will be adapted, in particular, to maximize information to calibrate the PBTK model.
(3) The PBTK model will be parameterized and adapted for fresh and aged nano-CeO2 in this project. The phagocytizing cell sub-module will also be further developed based on the in vitro experiment with nano-CeO2

Journal Articles on this Report : 1 Displayed | Download in RIS Format