The overall objective is to improve our understanding of environmental exposure-dose pathways of CeO2 nanoparticles (NPs). Our Specific Aims are:
(1) Environmental transformation and uptake of freshly-combusted and aged CeO2:  characterize environmental transformation and physicochemical properties of aged CeO2 NPs using their interactions with UV radiation and ambient air co-pollutants, and compare them to freshly-combusted CeO2 NPs;
(2) In vivo biological fate of CeO2 NPs:  determine the biological fate of freshly combusted and aged CeO2 NPs, comparing the concentrations in blood and target organs resulting from animal inhalation and intratracheal exposures; and
(3) In silico PBTK modeling of CeO2 NPs:  develop and evaluate a physiologically based toxicokinetic (PBTK) model of CeO2 NPs to identify the main factors affecting translocation and distribution of CeO2 NPs in the body.

Work progresses according to the foreseen timeline, with the following specific achievements in the first project year:
1. Environmental transformation and uptake of freshly combusted and aged CeO2
1a) Material synthesis and generation of CeO2 NPs:  Ceria nanoparticles have been successfully synthesized by combustion of cerium acetate. The composition has been confirmed by x-ray diffraction. Average crystallite size was determined using high resolution scans of [220] feature of the XRD spectra. The different synthesis conditions studied yielded average crystallite sizes 17 nm to 34 nm. The preliminary data indicate crystalline phase (specifically, CeO2 and Ce2O3) of the nanoparticles also can be controlled in the synthesis environment. Digital images of some of the powder samples are presented in Figure 1. The change in color of the powders is considered an indication of the change in crystalline phase of the ceria. For the inhalation and partner studies, CeO2 phase particles will be used. The synthesis conditions used to generate the samples shown in Figure 1 are provided in Table 1. The conditions associated with the four samples are presented in Table 1. The color change is considered an indication of change in the relative amounts of CeO2 and Ce2O3 present in the samples, with darker/grey colored samples containing more Ce2O3 than the lighter/more white colored samples.

1b) Atmospheric transformation of CeO2 NPs:  In collaboration with Ingeniven Inc. (North Hampton, NH), we designed an atmospheric reaction chamber (a fluorinated ethylene propylene Teflon bag) and its enclosure during this reporting period (shown in Figure 2). After a comprehensive search for lamps that can simulate the UV portion of the solar spectrum and fixtures with an acceptable price, we found UV-340 lamps to be an excellent choice. Our chamber will have about 250 W/m2 of direct UV flux in the chamber, which is equivalent to five times solar UV flux. Reflections from the interior surface of the enclosure are expected to significantly increase this figure; actual UV flux levels will be measured with a UV meter when the chamber is completed. 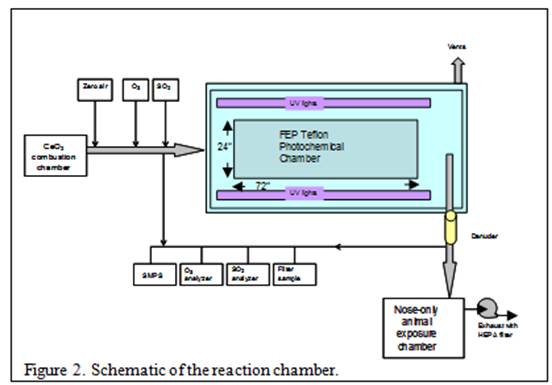 1c) Physicochemical characterization of CeO2 NPs:  XRD spectra of the ceria nanopowders generated using the University of Michigan combustion synthesis facility are presented in Figure 3. Table 2 presents the corresponding results of Scherrers analysis of the XRD spectra.
1d) Macrophage uptake of CeO2 NPs:  Cultures of RAW 264.7 cells (ATCC; murine macrophage) have been established and ceria treatment protocols are being screened by comparing commercially available ceria (50 nm; Aldrich Chemical Co.) with laboratory generated CeO2 (Wooldridge, U-Mich). Our in vitro studies have focused initially on dissolution of NPs in culture media of varying serum concentration 0.1-10%. Compared to other metal oxides, secondary ceria NP in culture media have large amounts of protein. Most cell culture media is supplemented with 10% fetal calf serum for routine culture, and switched to 1% serum to slow cell divisions during treatments or interventions. NP size of commercially available by dynamic light scattering was approximately 218 nm and was independent of serum concentration. This is consistent with the literature where sizes of metal oxide NPs dissolved in culture media are routinely 200-300 nm.
Current studies are designed to establish dosing ranges for commercial and lab-generated ceria. RAW cells were incubated with 0, 20, 60 and 120 μg/ml NPs in 1% serum for 16 h. Data analysis for cell viability, cytokine production and cellular CeO2 content are ongoing.
2. In vivo biological fate of CeO2 NPs
We have secured an 1100 ft2 laboratory at the University Research Containment Facility (URCF) at Michigan State University for as long as necessary to construct the combustion, aging and exposure systems to conduct in vivo studies. Particle generation and animal exposures will occur in the same room. A twelve-port nose-only exposure system has been purchased (CH Technologies, Rochester, NY) and assembled. Work in Year 2 will be focused on integration of combustion, aging and exposure units, the conduction of exposures and necropsies, and completing analysis of tissues as described in the Specific Aim.
3. In silico PBTK model
3a) and 3b) Development of the integrated PBTK model with macrophage module
The current PBTK model is based on a preliminary experiment of polyacrylamide (PAA and PAA-peg) administrated via intravenous injection. After NPs enter the venous blood they are distributed to various organs (liver, lungs, kidneys, etc.) via systemic circulation. The NPs in the tissues interact with the macrophages within and are stored in the macrophages until the macrophages are saturated. The NPs are eliminated from the body by a relatively slow excretion process. The scheme of the framework is presented in Figure 4. To our knowledge, this is the first PBTK model examining the whole body biobehavior of NPs with the consideration of macrophages.
3c) Model evaluation
Figure 4 shows the predictions from the PBTK model agree well with the measured data. Four major parameters are identified:

The major objectives and tasks for project period 2 are summarized below:
(1) For the characterization of freshly combusted and aged CeO2, we will refine the XRD analysis for composition and expand to transmission electron microscopy to further characterize particle size and morphology. We also will use a scanning mobility analyzer to measure the particle size distribution. We will explore other methods such as FTIR and XPS to provide additional compositional information on the NPs. For in vitro uptake of nano-CeO2 by macrophage, we will confirm protocol dimensions for dose and time, and conduct comparisons of cellular responses to freshly generated and aged ceria NPs.
(2) The main focus of period 2 will be on the in vivo measurement of freshly combusted and aged nano-CeO2 fate in mice following inhalation.
(3) The PBTK model will be parameterized and adapted for Nano-CeO2, introducing the inhalation pathway and compared to measurements from objective 2.