The overall objective is to improve our understanding of environmental exposure-dose pathways of CeO2 NPs.  Our Specific Aims are:

(2) In vivo biological fate of CeO2 NPs: determine the biological fate of freshly combusted and aged CeO2 NPs, comparing the concentrations in blood and target organs resulting from animal inhalation and intratracheal exposures; and

(3) In silico PBTK modeling of CeO2 NPs: develop and evaluate a Physiologically Based ToxicoKinetic (PBTK) model of CeO2 NPs to identify the main factors affecting translocation and distribution of CeO2 NPs in the body.

Work has focused on improving the consistency between instruments and the run-to-run reproducibility, with the following specific achievements in this third project year:

The size distribution of the aerosol is monitored in the experiments in real time using a differential mobility analyzer (DMA).  Recent experiments showed differences between the SMPS data and filter mass samples (obtained simultaneously). Some differences are expected due to the particle size filter used with the DMA (to remove particles <~0.5 mm in size), but the discrepancies prompted additional studies to refine our understanding of the size distribution of the nanoparticles. In particular, the DMA data indicated a significant increase in the number of the largest particles in the size spectrum. These large diameter particles would account for a significant portion of the total particle mass. As seen in Figure 1, the increase is observed for particles >250 nm in size for all of the samples. The particle sizes are characterized in the DMA by applying an electrical field to the path of the aerosols. Larger particles are separated by applying a stronger electrical field induced by higher voltages. The higher voltages have been reported to induce arcing in cases of aerosols with high humidity, such as the case of the CeO2 particles generated by the burner; the natural product of the combustion process includes water vapor.

Figure 1. Normalized number concentration as a function of particle diameter.

After consulting with the device manufacturer, a series of tests were designed to identify if arcing was the cause of the increase in the signal associated with higher particles. A flow equalizer system was installed to increase the scanning range to larger particles. The scanning range was set to the maximum range (spanning from 11 V for the smallest size to 9720 V for the largest size). The experiments were then repeated. The increase in signal at the larger particle sizes was observed again as seen in Figure 2. For all of the cases, the increase occurred at ~7800 V which corresponds to a significantly larger size at the reduced sample flow rate condition. 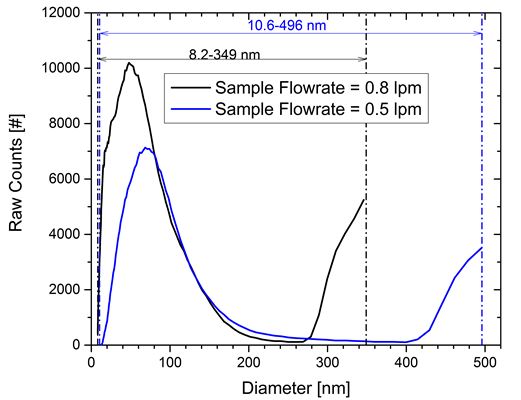 After identifying the maximum voltage threshold for arcing, the DMA measurements were subsequently restricted to voltages below that level, which excludes the arcing effect. The results can be seen in Figure 3. This process has corrected the false signals for larger particle sizes.

During this reporting period, we completed five animal exposure studies. CeO2 distribution and excretion data from one of the exposure studies is shown in Table 1. Two animals were sacrificed at each of four different post-exposure times, and all tissue materials were removed. All samples were weighed and then acid-digested in concentrated nitric acid.  Sample extracts were then diluted and analyzed for Ce using inductively coupled plasma–mass spectrometry (ELEMENT2, Thermo Finnigan, San Jose, CA). As expected based on other recent studies, highest quantities of CeO2 nanoparticles were recovered from lung tissues and feces.

During this project period, we also completed numerous dry test runs to better characterize the mass and size distribution of CeO2 NPs as well as exposure chamber conditions. We have been able to improve the run-to-run reproducibility, by incorporating an impactor into the chamber so that it filters out larger agglomerated particles with high mass contribution that were causing random variations. This addition also enables us to select nano-range particles (excluding larger sizes) for upcoming in vivo exposure studies.

3. In vitro study of the interaction between CeO2 NPs and macrophages.

Two dose ranging studies have been conducted in macrophage cultures (RAW 264.7: mouse leukemic monocyte macrophage cell line) to determine passive diffusion and active uptake of freshly combusted CeO2 NPs. Incubation of cells with 0.1, 0.2, 0.5, 1, 2, 5, 10, 20, 50 & 100 mg/mL CeO2 NPs for 4 hours resulted in an inconsistent pattern of uptake that did not display a dose-dependent relationship. We suspect that sample collection and processing methods contributed to the range of Ce detected in cell samples. Additional studies have been conducted in order to standardize samples based on protein content. We will also distinguish passive diffusion of NPs across the cell membrane from active internalization processes by incubating cells at 4oC or 37oC, respectively, during NP incubations.

The Physiologically-Based Toxicokinetic (PBTK) model based on our paper published in the journal Nanotoxicology was adapted to the inhalation exposure pathway for this study in 2013-204. For inhalation exposure, the alveolar region in the lungs takes up the majority of NPs. Then from the alveolar region, NPs are slowly released into the blood and distributed to other organs. Parts of the inhaled dose during the exposure duration may deposit in the upper airway and be swallowed into the GI tract before quickly excreted via feces, which can explain the high concentrations found in the feces shortly after the exposure studies. Also, it is possible that some NPs are transferred to the olfactory region and taken up by the brain directly, by-passing the blood-brain-barrier. According to the model, the phagocytizing cells are responsible for storing the NPs in various organs. This adapted model was parameterized rat experiments conducted during the 2013-2014 period of this project. Figure 4 illustrates the framework of this inhalation PBTK model. Figures 5 shows the comparison between model predicted results and measured data. 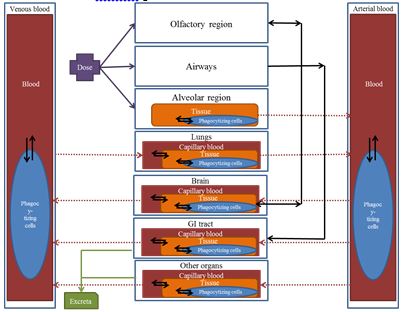 The major objectives and tasks for the final project extension to period 3 are summarized below: (1) Characterization of fresh and aged NP sizes with SMPS and investigation of particle size and morphology by using x-ray diffraction and transmission electron microscopy techniques. (2) Two major efforts for in vivo inhalation studies include the completion of exposures to freshly-generated NPs, followed by a series of exposures to aged NPs. (3) Optimal in vitro NP doses derived from the current dose-ranging protocols will be used in time course studies to determine uptake rates. Cytotoxicity, expression and production acute cytokine responses will be determined in both airway macrophage cultures (RAW 264.7 cells) and airway epithelial cells (BEAS-2B) of human origin. (4) The PBTK model will be refined with new in vivo data, including measured amount of NPs in the olfactory region and GI tract. The phagocytizing cell sub-module also will be parameterized by data obtained in this study and integrated into the whole body PBTK model. Finally, these results will be published in two additional peer reviewed publications. A presentation has also been accepted as platform at the 24th International Society of Exposure Science Conference; Oct 12-16; Cincinnati, United States. (Li, D.; Barres, J.; Eagle, E.; Emond, C.; Morishita, M.; Wagner, J.G.; Wooldridge, M.; Jolliet, O. (2014). Physiologically Based Pharmacokinetic Modeling of Cerium Oxide Nanoparticles by Inhalation Exposure in Rats.