This center will advance predictive toxicology by developing four organotypic culture models (OCMs): liver, mammary gland, limb/joint development, and fetal membrane. These 3D cultures of heterotypic cells will better approximate the in vivo cellular microenvironment and are amenable and affordable for medium to high throughput screening. Screening of these OCMs against 30-50 chemicals from the ToxCast inventory will demonstrate whether OCM toxicity is predictable from ToxCast in vitro assays and whether OCM toxicity is predictive of previous animal studies and/or human epidemiology.

In Year 2, the VPROMPT Center has:

Further, we have successfully adapted the University of Pittsburgh Microphysiology Database (UPMDb) to manage, consolidate, visualize, QC, and organize OCM data for transfer to the EPA and we already have compiled pre-clinical, clinical, and epidemiology findings on VPROMPT chemicals into UPMDb.

Project 1 (Mammary Gland): During Year 2, the team has developed a monoculture mammosphere OCM in a six device, parallel testing system (Gen1.0) for medium throughput screening. They currently are finalizing integration of perfusion hardware (Gen2.0) and evaluation of the tri-culture system. Detailed protocols have been developed for toxicant interactions with PDMS, including saturation tests and on/off rates where interaction was noted. This investigation is especially valuable as several microfluidic organotypic cell culture systems are fabricated using this material. Further, Project 2 has produced stably-transfected cell lines with fluorescent, lentiviral biosensors in order to allow for medium-throughput microscopy screening of toxicant effects. Finally, 3D culture methods including measurable biomarker readouts for protease activity have been established. Because at life stages of active tissue growth and remodeling the mammary gland is particularly sensitive to toxicant exposures, this OCM developed for screening and evaluation of ToxCast chemicals will be especially valuable for environmental research.

Project 2 continued to work in close collaboration with Project 5 to develop a mechanostimulatory bioreactor for modeling joint segmentation (OCM3). Project 5 has delivered several versions of a concentric ring-based bioreactor (version 1). Although surface conditions, seeding procedures, and differentiation conditions were tested and optimized by Project 2, it was determined that the requirements of the bioreactor dimensions and manufacture (as determined by the biology of the seeded cells) made fabrication of this device at a suitable scale very difficult. A second, simpler and smaller bioreactor is under development (version 2) involving a cartilage rod that is immobilized within an anchoring block. Flexion is produced using an actuator that moves the free end of the cartilage rod submerged in medium. This model is more easily scalable to medium throughput testing.

Altogether, the results Project 2 has collected this past year will be useful in moving VPROMPT closer toward limb development organ-chip models in suitable bioreactors capable of elucidating the details of adverse outcome pathways from molecular toxicant initiating events to tissue-level responses in order to protect human health.

Project 3 (Fetal Membranes): The Fetal Membranes project team has successfully tested experimental concentrations of lipopolysaccharides (LPS, 10 ng/ml) in combined use with TCDD (10 nM) for an exposure of 4 hours (LPS exposure) and 24 hours (TCDD exposure). Inflammatory biomarkers to be used are IL-1 beta, TNF-alpha, IL-6, and IL-8, which all have been validated using fetal membrane punch biopsies via cytometric bead array panels, PCR, and ELISA assays. When amniotic cells were primed with TCDD, the team found that MMP7 levels decreased and MMP8 levels increased. Similarly, proteinases for collagen type IV (MMP2 and MMP9) are dysregulated by TCDD exposure. Most significantly, observations using the transwell-based fetal membrane model revealed that the sidedness of exposure was not a critical determinant of response in the context of toxicant screening and hence Project 2 chose to use punch membrane biopsies as an appropriate model for the initial screening studies.

At the same time, Project 2 has been developing the IFMOC 3.0 multilayer microfluidic model. They were able to demonstrate tight junction formation of human amniotic epithelial cells (hAMEpi) inside the device and showed that FITC-dextran diffusion across the membrane could thus be prevented. Co-cultures with hAMEpi cells already have been successfully maintained for 7 days inside a two-chamber IFMOC device.

Because fetal membrane inflammation is a leading cause of preterm birth, it is important to develop a model that can recapitulate various inflammatory responses. Using a mouse model, we have previously shown that exposure to environmental toxicants (TCDD) can cause an even more exaggerated inflammatory response to such microbial infections. Hence, our work to also demonstrate these fetal membrane behaviors in the transwell and IFMOC devices is very important for OCM validation and later ToxCast chemical evaluation.

Project 4 (Liver): The liver OCM was developed and previously characterized in the Nortis commercial microfluidic device (Seattle, WA) at the Drug Discovery Institute laboratory of D. Lansing Taylor, University of Pittsburgh. The liver OCM consists of four human liver cell types (primary human hepatocytes, a Kupffer-like immune cell, stellate, and endothelial cells) that are constructed as a 3D, microfludic tissuelike liver structure modeling the liver acinar organization. A subset of the human hepatocytes was transduced with a lentiviral construct to encode the hepatocyte genome with an expressible fluorescent cytochrome C protein in the mitochondria to monitor activation of apoptosis. Construction and use of the model and fluorescent protein transductions have been previously published. 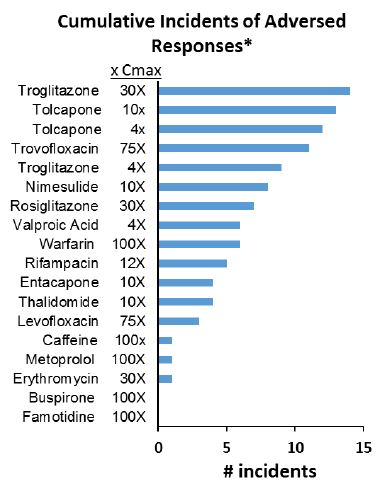 Seventeen compounds were tested at 1 or 2 concentrations for 18 days of treatment in the liver OCM. The cumulative incidents of adverse responses (an adverse response is defined as a 50% change from control for any of the following measurements: 18 LDH, 3 Albumin, 3 Urea, 2 Cytochrome C biosensor, and 1 each for Bile Efflux, TNF-α and Testosterone clearance measurements) for the compounds as shown in the figure. Out of a possible 29 toxicity measurements collected over the 18 day treatment period, the clinical hepatotoxins troglitazone, tolcapone, trovafloxacin, and Nimesulide produced more adverse incidents then iDILI compounds such as valproic acid and warfarin or when compared to non-hepatotoxins caffeine or buspirone.

The third milestone, to incorporate the liver OCM into an integrated platform being developed at Vanderbilt University, will be completed in 2017.

Summary Implications to EPA mission. The data generated from the secretome and the compound screening are expected to be used in conjunction with computational assessment at the University of Pittsburgh and EPA to develop tools that would better assess in vivo human risk from exposure to a chemical or metabolites. The liver OCM is included in this project for two reasons: a) to provide a platform that bioactivates test agents to study the effect of metabolites on the developmental organs in the project; and b) to provide time dependent changes in liver functions, clearance, initiation of apoptosis, or activation of liver immune cells as a response to compounds with known mechanisms of toxicity. These data are expected to produce experimental evidence to better define adverse outcome pathways associated with compound treatment.

Project 5 (Systems Engineering & Analysis): Project 5 teams are responsible for development of microfluidic perfusion hardware that will allow multiple organotypic culture models to be integrated with each other and electrochemical sensor systems (MicroClinical Analyzer) that will enable evaluation of OCM health prior to and after toxicant exposure. Glutamate sensors have been developed for the MicroClinical Analyzer. In addition, cholesterol and ammonium sensors are being finalized. The sensor volume has been reduced to 6 μl. We also have refined our processes to produce circular-segment 5-port and 24-port rotary planar valves (RPVs) and rotary planar peristaltic micropumps (RPPMs) that span a range of flow rates from 0.5 to 800 μL/min. At the same time, the team has made excellent progress toward full software automation of OCMs and integration of wireless capabilities. Both will greatly reduce the time required for hands-on OCM manipulations and increase screening throughput. Finally, the hardware team routinely is producing prototypes for limb development segmentation devices (OCM3, Project 2).

The ion mobility-mass spectrometry team of Project 5 has established baseline metabolic readouts for the liver OCM and is ready to establish baselines for Projects 1 and 3 as these devices reach a finalized development stage.

Finally, the prediction modeling team has recommended a uniform protocol for determining AC50s and maximal responses based on nonlinear least squares regression methods. Potential methodologies for clustering metrics and for constructing meaningful prediction models have been discussed. As training data from OCM chemical exposure experiments become available, the team anticipates an increase in their efforts under this milestone.

Project 1 will continue collaboration with Project 5 toward upgrading the platform integrated MG OCM to include smaller footprint valves and pumps necessary for sampling and coupling the liver OCM upstream of the MG OCM. Further, we will be using measures for on/off rates and saturation values and generate a mathematical description of toxicant/bioreactor interaction. We also plan to screen toxicants, validate the MG OCM reactor system for medium throughput for stage specific and acute toxicity assessment using optical and electrochemical sensing, and move towards High Content profile analysis beginning with proteinase activity analysis of mammosphere formation using an identified toxicant. Finally, we will develop strategies for liver OCM-MG OCM coupling.

Project 2 plans to complete its QAPP and gain IACUC approval for a protocol for dosing of rat dams with teratogens. Using OCM1 and OCM2 (for which chondrogenesis and hypertrophy have been characterized by RT-PCR and histology) we will:

b) Test the utility of matrix anabolic processing and catabolic degradation products from the medium using ELISAs.

Further, we will continue to work on OCM3 (joint segmentation). We will test/develop a system for generating cartilage rods of appropriate length and diameter to accommodate a model that can be flexed appropriately. Once the model is developed, we will begin characterization of tissue development by RT-PCR, histology and promoter-reporter activity. In addition, we will develop microfluidically-enabled bioreactors for OCM1 and OCM2:

a) First, we will test OCM1 and OCM2 in a proof-of-concept platform based on the Kiyatec Cube using solid and porous PCL membranes and syringe pumps. The important part in this model will be establishing that the 2 μl culture can undergo normal chondrogenic and hypertrophic differentiation (as determined by RT-PCR and histology) on the membranes under flow. Membrane type and topography as well as flow rates will be communicated to Project 5.

b) Final platform design will be developed with Project 5 based upon existing platforms at Vanderbilt University (i.e., brain-on-a-chip). There will be one major modification: the top of the bioreactor must be removable to accommodate the unique seeding requirements of this culture. The strength of using an existing platform is that when the modification is incorporated, the system will be compatible with existing fluidics common to all platforms in the project.

We will test known teratogens (currently VPA, warfarin, and thalidomide), once the QAPP is approved. The tests will include correlating changes in culture development (by RTPCR, histology, and promoter-reporter activity) with stress responses and anticipated markers of the known adverse outcome pathways (AOP). The specific assays for AOP assessment are to be determined. We also will integrate our model with that of Project 4 (Liver):

a. Proof-of-concept experiments will involve the use of liver-conditioned medium containing liver bio-activated teratogens.

Project 3 now has exposed a HRT-8/SV-neo trophoblast monolayer to 10 nM TCDD for 48 hours inside a single chamber IFMOC device. The next step will be to repeat these studies in the presence of a secondary inflammatory challenge with LPS. Murine studies ongoing in our lab, but not funded by the EPA, demonstrated that prior exposure to TCDD significantly enhances the maternal inflammatory response to GBS. These studies will guide our introduction of a second stressor (i.e., GBS, LPS, or second toxicant) into the IFMOC.

Project 4 will develop new biosensors and work with Projects 1-3 to incorporate mechanism-based fluorescent protein biosensors into their OCMs. Additionally, we will work with Project 5 to test our liver OCM on the integrated platform, test and optimize our liver OCM for integration with other OCMs from Projects 1-3, and validate liver readouts on the integrated platform. We also will work to validate iPSC hepatocytes for inclusion in our OCM.

Project 5 will continue refinement of device integration and molding to reduce cost for platform integration and use. In addition, the ion mobility-mass spectrometry team is standing by to receive new organ-device effluent samples for analysis and the modeling team will begin performing cluster analysis and predictive modeling of OCM responses.