The liver organotypic culture model (OCM) was developed and previously characterized in the Nortis commercial microfluidic device (Seattle, WA) at the Drug Discovery Institute laboratory of D. Lansing Taylor, University of Pittsburgh.  The liver OCM consists of four human liver cell types (primary human hepatocytes, a Kupffer-like immune cell, stellate, and endothelial cells) that are constructed as a 3D, microfluidic tissue-like liver structure modeling the liver acinar organization. A subset of the human hepatocytes were transduced with a lentiviral construct to encode the hepatocyte genome with an expressible fluorescent cytochrome C protein in the mitochondria to monitor activation of apoptosis.  Construction and use of the model and fluorescent protein transductions have been previously published (Vernetti, et al., 2015; Senutovitch, et al., 2015; Vernetti, et al., 2016).

Seventeen compounds were tested at 1 or 2 concentrations for 18 days of treatment in the liver OCM. The cumulative incidents of adverse responses (an adverse response is defined as a 50% change from control for any of the following measurements: 18 LDH, 3 Albumin, 3 Urea, 2 Cytochrome C biosensor, and 1 each for Bile Efflux, TNF-α, and Testosterone clearance measurements) for the compounds shown in the figure. Out of a possible 29 toxicity measurements collected over the 18 day treatment period, the clinical hepatotoxins troglitazone, tolcapone, trovafloxacin, and nimesulide produced more adverse incidents than iDILI compounds such as valproic acid and warfarin or when compared to non-hepatotoxins caffeine or buspirone.

The third milestone, to incorporate the liver OCM into an integrated platform being developed at Vanderbilt University, will be completed in 2017. 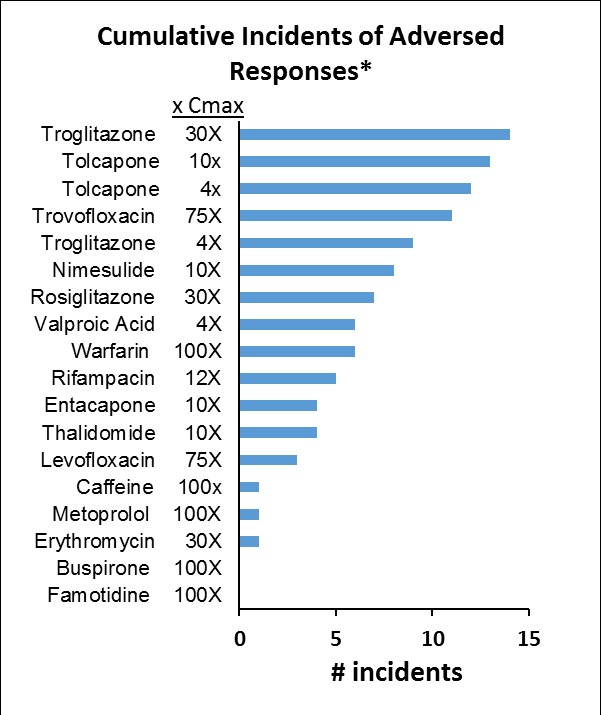 In Year 3, we will complete the following milestones:

Milestone 14: Test and optimize module for interaction with other tissue modules;

Milestone 15: Collaborate with other groups to incorporate mechanism-based fluorescent protein biosensors in other cells; and