Our goal is to develop robust in vitro three-dimensional (3D) organotypic culture models (OCMs) based on human mesenchymal stem cells (MSCs) to first examine critical phenomena of embryonic limb development that are prime targets of limb teratogenesis, and then examine their susceptibility to perturbation by known and candidate teratogens and environmental toxicants.

Project 2 has demonstrated that, like 10 µL 40,000 cell cultures, 2 µL micromass cultures containing 40,000 adult human MSCs undergo chondrogenesis (OCM1) and hypertrophy (OCM2)—a scale more amenable to medium throughput assays. The transduction conditions and function of virally-delivered promoter-reporter constructs for specific signaling pathways relevant to different stages of skeletal development have been shown in control chondrogenic cultures (OCM1)—allowing for real-time, non-invasive analysis of stress response and differentiation of the cultures. A bioreactor for mechanical stimulation of cartilage to activate joint-specific gene expression (OCM3, version 1) has been fabricated by Project 5, tested by Project 2 and found to have mechanical and biological short-comings that require a re-design—OCM3 version 2 is actively being tested. The ability of the cultures to develop on porous, polycarbonate membranes—a membrane used in other Project 5 microfluidic platforms—has been demonstrated and the specifications for microfluidically-enabled chondrogenic and hypertrophic cultures have been determined. Modifications to existing platforms developed by Project 5 are in development. In addition, 2 µL 40,000 cells micromass cultures have been shown to develop normally in liver medium, indicating that direct connection of limb cultures downstream of liver is feasible. 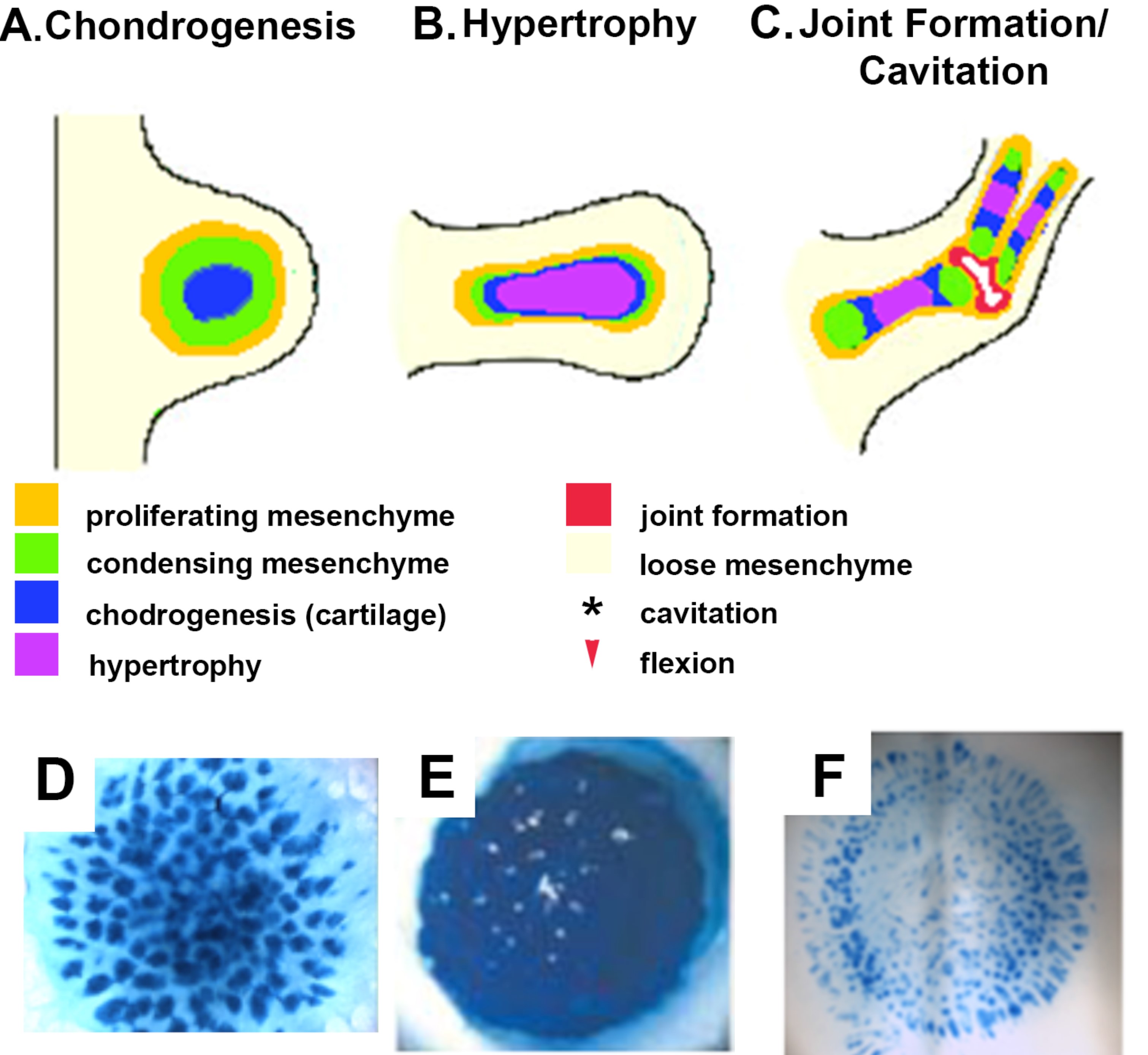 Figure 1. Organotypic culture design. (A-C) Development of the axial cartilaginous skeletal model. (A) The limb bud, the earliest morphogenic indication of limb development, is a protrusion from the lateral plate mesoderm that is initially comprised of the ectoderm overlying specified but undifferentiated mesenchymal cells that proliferate, condense, and differentiate into cartilage. (B) As the limb bud grows and elongates, the cartilage matures and undergoes hypertrophy, a step required for future endochondral ossification. (C) The process of joint formation involves alignment of cells along the site of the future joint forming the interzone that undergoes cavitation (shown in red) resulting in a joint space, proximal and distal joint surfaces and capsular lining. Stages of limb development can be replicated in vitro using a 3D planar high density micromass in various configurations. (D-F) Representative cultures using chick embryonic limb bud undergoing chondrogenesis, hypertrophy or segmentation stained with Alcian blue—specific for cartilage-specific sulfated proteoglycans.

Project 2 will complete assessment of signal transduction promoter-reporter constructs and differentiation stage-specific promoter-reporter constructs, including a correlation between promoter activity (the surrogate) and actual target gene activity under control conditions and a means to quantify promoter activity. We also will test the utility of matrix anabolic processing and catabolic degradation products from the medium using ELISAs. Project 2 will continue to work with Project 5 in the development of a mechanical stimulator for the joint segmentation model. Once the model is developed, we will begin characterization of tissue development by RT-PCR, histology, and promoter-reporter activity.

Microfluidically-enabled skeletal development models of chondrogenesis and hypertrophy will be developed and tested based on existing platforms developed by Project 5. This will place OCM1 and 2 in a platform common to other tissue models in the project and allow direct connection of limb models to other systems. Project 2 will characterize OCM1 and 2 development in control liver-conditioned medium and that containing liver-processed teratogens using conditioned medium before directly connecting limb OCMs to liver OCM. Once the QAPP is approved, Project 2 will test known teratogens (currently VPA, warfarin, and thalidomide) on 2 µL 40,000 cell cultures in microfluidic platforms alone and in connection (direct or indirect) with liver OCMs. The tests will include correlating changes in culture development (by RT-PCR, histology, and promoter-reporter activity) with stress-responses and anticipated markers of the known adverse outcome pathways (AOP). The specific assays for AOP assessment are to be determined.