Our goal is to develop robust in vitro three-dimensional (3D) organotypic culture models (OCMs) based on human mesenchymal stem cells (MSCs) to first examine critical phenomena of embryonic limb development that are prime targets of limb teratogenesis, and then examine their susceptibility to perturbation by known and candidate teratogens and environmental toxicants.

The effect of three known teratogens (valproic acid, warfarin and thalidomide) on adult human MSC micromass culture chondrogenesis and hypertrophy also has been tested. Using outcomes based on RT-PCR, immunohistochemistry and biochemistry, effective doses approximating reported maternal plasma levels have been observed. Specific mechanisms of OCM disruption are under investigation. Initial tests for the effect of two candidate teratogens (bisphenol A and mifepristone) on adult human MSC chondrogenesis and hypertrophy also have been performed. Testing of limb developmental stage-specific promoter-reporter constructs and ELISAs to detect extracellular matrix metabolites to monitor OCM development and maturation noninvasively is underway. 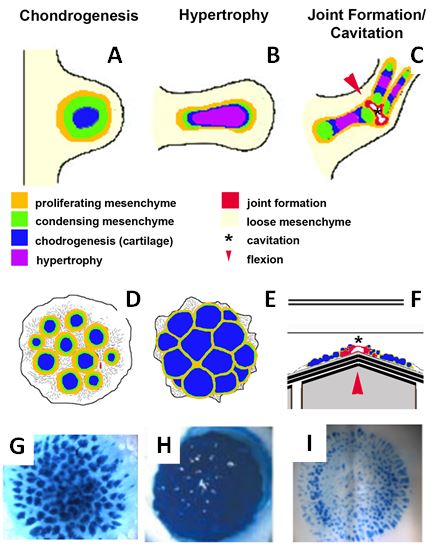 Figure 1: Organotypic culture design. (A-C) Development of the axial cartilaginous skeletal model. (A) The limb bud, the earliest morphogenic indication of limb development, is a protrusion from the lateral plate mesoderm that is initially comprised of the ectoderm overlying specified but undifferentiated mesenchymal cells that proliferate, condense, and differeniate into cartilage. (B) As the limb bud grows and elongates, the cartilage matures and undergoes hypertrophy, a step required for future endochondral ossification. The process of joint formation involves alignment of cells along the site of the future joint forming the interzone that undergoes cavitation (shown in red) resulting in a joint space, proximal and distal joint surfaces and capsular lining. Stages of limb development can be replicated in vitro using the 3D planar high density micromass in various configurations (D-F). (D) Chondrogenesis procedes as a function of commitment to the cartilage lineage at the time of explantation, forming discreet nodules within 3 days of plating in a manner very similar to that in vivo. Hypertrophy in these cultures can be induced through the application of T3 at day 10 of culture, inducing nodule expansion and hypertrophy of the constituent cells. (F) Mechanical stimulation of a chondrogenic culture at day 3 can stimulate joint gene expression along regions (red) of localized stretch (red arrowhead). (G-H) Representative cultures using chick embryonic limb bud undergoing chondrogenesis, hypertrophy, or segmentation stained with Alcian blue – specific for cartilage-specific sulfated proteoglycans.

Project 2 will adapt chondrogenic and hypertrophic cultures to a format suited for existing microfluidic hardware developed by members of Project 5. This will involve reducing the cell number to 40,000 cells in 2 microliter droplets and culturing the cells on a porous membrane, such as 0.4 micron polycarbonate membranes.

Using these smaller cultures amenable to medium throughput analysis, we will develop tools and techniques for noninvasive analysis. They will involve: (1) determining the utility of tissue-specific promoter-reporter constructs in evaluating chondrogenesis hypertrophy and joint segmentation noninvasively, and (2) correlating changes in extracellular matrix metabolite detection detected by ELISA in the culture effluent (i.e., noninvasively) with changes in tissue development and maturation as detected by destructive endpoint analyses. This is also the OCM format we will use to develop microfluidic modalities for limb development OCMs in collaboration with Project 5.

Two additional aspects of culture development and maturation will be undertaken in collaboration with Project 4. First, the effect of liver conditioned medium in the presence or absence of metabolized (bioactivated) teratogens on OCM development will be assayed using a conditioned medium approach. Second, we will correlate changes in chondrogenesis and hypertrophy endpoint analyses and/or noninvasive matrix metabolite detection and promoter-reporter activity with cell stress and cell death and apoptotic biosensor activity.

No journal articles submitted with this report: View all 6 publications for this subproject

The Vanderbilt-Pittsburgh Resource for Organotypic Models for Predictive Toxicology Exit