The U.S. EPA is announcing the availability of the final Integrated Science Assessment for Oxides of Nitrogen – Health Criteria as described in a January 28, 2016 Federal Register Notice.

This final report provides the U.S. EPA’s evaluation and synthesis of the most policy-relevant science related to the health effects of gaseous oxides of nitrogen. It provides a critical part of the scientific foundation for the U.S. EPA’s decision regarding the adequacy of the current primary (health-based) national ambient air quality standards for nitrogen dioxide.

Oxides of nitrogen are one of six principal (or criteria) pollutants for which the U.S. EPA has established national ambient air quality standards (NAAQS). For gaseous oxides of nitrogen, the NAAQS are specified in terms of nitrogen dioxide (NO2). The Clean Air Act requires the U.S. EPA to periodically review the scientific basis for these standards by preparing an ISA. These reviews play a significant role in the U.S. EPA’s commitment to ensuring a clean and healthy environment for the public. The Clear Air Scientific Advisory Committee, an independent panel of scientific experts mandated by Section 109(d) of the Clean Air Act, is charged with independent scientific review of the U.S. EPA’s air quality criteria.

This report is part of the Agency’s periodic review of the primary (health-based) NAAQS for NO2. Overall, findings integrated from previous and recent studies strengthen the conclusions from the previous NAAQS review, which was completed in 2010. The cumulative body of evidence indicates that short-term exposure to NO2 can cause respiratory effects, in particular, effects related to asthma exacerbation. Recent results also strengthen the evidence that the respiratory effects of short-term NO2 exposure are independent of the effects of many other traffic-related pollutants. There is now stronger evidence for a relationship between long-term exposure to NO2 and respiratory effects, particularly the development of asthma in children. Results suggest that short-term exposure to NO2 may be associated with cardiovascular effects and premature mortality and that long-term exposure may be associated with cardiovascular effects, diabetes, poorer birth outcomes, premature mortality, and cancer; however, it is uncertain whether NO2 exposure has an effect on these health outcomes that is independent from the effects of other traffic-related pollutants.

The Clean Air Act (CAA) requires EPA to periodically review and revise, as appropriate, existing air quality criteria and NAAQS. The CAA also requires an independent scientific committee to review the criteria and to advise the Administrator regarding any recommended revisions to the existing criteria and standards, as may be appropriate. The Clean Air Scientific Advisory Committee (CASAC) of EPA’s Science Advisory Board serves as this independent scientific committee. The ISA is one of the four major elements of the NAAQS review process that will inform the Agency’s final decisions; other components of the process are an integrated plan highlighting the key policy-relevant issues; a risk/exposure assessment if warranted; and an advance notice of proposed rulemaking (ANPRM) reflecting the Agency’s views regarding options to retain or revise the NO2 NAAQS based on the evaluation of key information contained in the ISA and Risk/Exposure Assessment, as well as additional appropriate technical analysis. 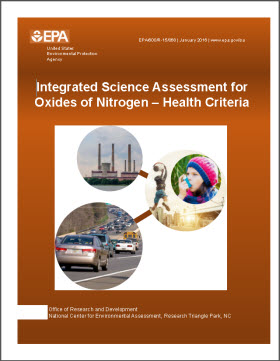