[NOTICE] If you are having issues downloading the files on ISA Preamble website, we recommend you try opening the site in another web browser. Or copy the link address to another tab to open the attachment in a new window.

The Preamble to the Integrated Science Assessments, or "Preamble", is an overview document outlining the basic steps and criteria used in developing the Integrated Science Assessments (ISA). Previously included as part of the ISA, it will now be referenced by each ISA as a stand-alone companion document. Details and considerations specific to an individual ISA will continue to be included in the Preface and introductory material for each ISA. The Preamble and the approach described therein may be refined periodically in consideration of advice and comments received from the Clean Air Scientific Advisory Committee (CASAC) and the public during subsequent reviews of the National Ambient Air Quality Standards (NAAQS).

The Preamble describes the process of searching the literature, selecting studies for consideration, evaluating study quality, synthesizing and integrating the evidence, and characterizing the evidence for public health and welfare impacts of criteria air pollutants. Considerations pertaining to specific disciplines, such as atmospheric science, toxicology, epidemiology, and aquatic and terrestrial ecology are included in the Preamble.

The Preamble also describes the five-level causal framework for evaluating weight of evidence and drawing scientific conclusions and causal judgments.
The five categories are:

The purpose of the Preamble is to outline the general process used by the U.S. Environmental Protection Agency for developing an Integrated Science Assessment (ISA). The ISA provides a concise review, synthesis, and evaluation of the most policy relevant science to serve as a scientific foundation for the review of the National Ambient Air Quality Standards for the criteria air pollutants, which currently include carbon monoxide, lead, oxides of nitrogen, photochemical oxidants, particulate matter, and sulfur oxides. 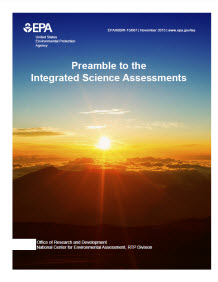