The overall goal of this pilot project was to develop novel methods to assess the impact of bisphenol A (BPA) or phthalate exposure on sexually dimorphic physical and behavioral endpoints in human infants during the first few months of life. Specifically, the goal was to develop reliable and valid outcome measures that are predictive of lasting deficits associated with prenatal exposures. We hypothesized that prenatal exposure to either BPA or anti-androgenic phthalates would be associated with a shorter (more female-like) anogenital distance (AGD) and, similarly, a larger (more female-like) second to fourth finger ratio. We further hypothesized that both prenatal BPA and phthalate exposure would be associated with poorer cognitive performance in infancy.

Recruitment: The goal was to enroll approximately 180 pregnant women between 16-18 weeks of gestation in order to obtain data from 150 full-term infants at birth. A total of 181 women were recruited to this pilot cohort between September 2010 and April 2012. In the process, we established the substantial infrastructure necessary to expand the cohort including developing strong collaborative ties with local obstetrical practices and hospitals. Of 1,280 women who received a brochure about the study at their first prenatal visit, 514 (40%) indicated interest in the study, 224 were eligible and 181 (81%) were enrolled. Table 1 shows the demographics of this mostly middle class sample. Women who declined to participate were similar in age (median = 28), but fewer (55%) had a college degree, and fewer (77%) were white. The primary reasons for refusal were lack of time (70%) or interest (26%). Of the women enrolled, 157 had healthy full-term infants who were assessed for physical and/or cognitive outcomes at birth. The infants were followed up three times during the first year of life with assessments of 143 (91%), 142 (90%), and 134 (85%) infants successfully completed at 4-5, 7-8, and 10-11 months of age, respectively. 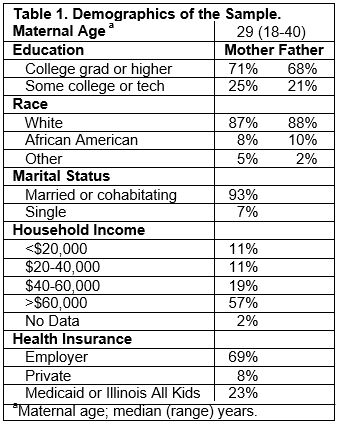 Exposure Assessment: First morning urine samples were collected at approximately 16-18 weeks and again at approximately 35-37 weeks for analysis of BPA and phthalates. The pilot study included funds to analyze only a subset of these samples, and to date, the two pregnancy urines have been analyzed for 69 of the women. The remainder of the samples will be analyzed as part of the expanded study that was funded in June 2013, and results should be available by summer 2014. Total BPA and 11 phthalate metabolites were quantified at the CDC Division of Laboratory Sciences using established protocols. BPA was detectable in 92% of samples and phthalate metabolites (except MEHP) in 99%. We used the mean of the two urine concentrations to characterize each woman's pregnancy exposures. The distribution of these values for BPA, metabolites of key phthalates (DEP and DEHP), and sum of DEHP metabolites (∑DEHP) are shown in Table 2. In general, the concentrations were similar to those reported in the National Health and Nutrition Examination Survey (NHANES), making our findings relevant to the general population. 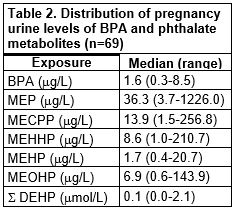 Exposure was studied more extensively in 19 pregnant women who participated in a sub-study (ES018163-S1). The goal was to assess sources of random variability (e.g., age, weeks of gestation, pre-pregnancy weight, weight gain and timing of urine collection with respect to when the women last ate or voided) that are unrelated to exposure pathways, and to determine whether accounting for these sources of random variability improves reproducibility and utility of the measures for exposure estimation. These women provided six first morning urines between 17 and 37 weeks of gestation. Intra-class correlation coefficients (ICCs) were calculated to characterize reproducibility, and ICCs were compared before and after adjustment for a priori covariates in multivariable linear mixed models (Table 3). Surrogate category analyses were used to estimate how well a single urine reflected exposure rank throughout pregnancy. Sensitivity, specificity and percent correct classification of a single measure relative to mean levels across pregnancy were calculated with logistic regression. 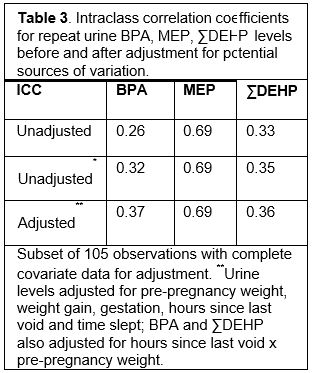 Adjustment for potential sources of random variability in BPA and phthalate excretion had only modest impact with slightly improved reproducibility of urine BPA, but not phthalates, modestly improved sensitivity of MEP and ∑DEHP metabolites and moderately improved classification of MEP (see Table 4). In general, urine BPA and phthalates had better reproducibility in this study than in others reported in the literature (e.g., Braun, et al., 2012 EHP). Use of first morning urines rather than spot urines may explain this finding. Of the analytes assessed, MEP was the most reproducible and predictive of exposure ranking. Consistent exposure to DEP via regular use of personal care products may have contributed to this finding. Overall, the results suggest that pooling urine from a number of samples collected across pregnancy to determine average exposure over time may be the best option for estimating exposure to these rapidly metabolized and highly variable chemicals. 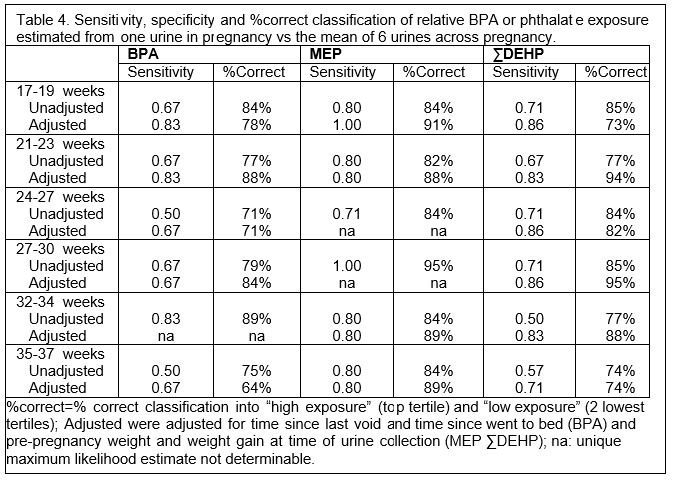 Infant Physical Outcomes: Studies in the literature have either used individual phthalate metabolite levels or summed the low molecular weight (LMW) and high molecular weight (HMW) phthalates to create composite exposure measures. However, the biological actions of phthalates are not linked to molecular weight. For example, DBP and DiBP, two LMW phthalates and DEHP, a HMW phthalate have roughly the same potency in reducing testosterone production, whereas DEP a LMW has no effect on testosterone production. Given that our hypotheses related specifically to the anti-androgenic nature of phthalates, we created a new exposure variable by adding the molar sum of all phthalate metabolites derived from anti-androgenic parent compounds. We used this as the phthalate exposure variable for preliminary analyses of infant outcome data. In preliminary analyses anthropometric measures including birth weight, body length, and head circumference were not associated with either BPA or phthalate exposure. Similarly, second to fourth finger ratio was not associated with exposure. However, both phthalates and BPA were associated with AGD (Table 4). The phthalate effect was consistent with a previous study by Swan, et al. (2005 EHP), and with the results of rodent studies (Gray, et al., 2000; Toxicol Sci). Boys with higher exposure to anti-androgenic phthalates had shorter AGD. In contrast, girls with higher BPA exposure had longer AGD.

Infant Cognitive Outcomes: An important goal of the Formative Center was to pilot novel methods for assessing the impact of prenatal exposures on newborn cognition. The goal was to identify valid and reliable psychometric measures of cognition in newborn and young infants that are sensitive to prenatal chemical exposures and predictive of continued associations with cognitive outcomes at later ages. The approach used innovative methods adapted from psychological research on infant cognition. A strength of the approach is that it assesses core abilities including information processing speed, working memory and attention, which are the foundations of long-term cognitive functioning.

A visual attention task (VA) administered to newborns was modeled after a task used by Sigman, et al. (1991, Cognitive Development) in a longitudinal study showing that information processing speed at birth correlated with intelligence tests at 5, 8, 12, and 18 years. Infants were shown two black and white checkerboards on a computer screen for 120 seconds. We assessed whether infants were attending to and processing information about the stimuli including the number of looks per minute (fixations) and the shift rate (number of shifts in gaze between the two boards). A higher number of fixations indicates that infants are less attentive (looking away more frequently). A higher shift rate indicates that infants are attending to and comparing the stimuli.

This pilot study illustrated that it is possible to collect visual attention data from a majority of newborn infants in the hospital setting. Additionally, preliminary analyses of data from the infants of women for whom exposure data are available (n = 51) indicated that phthalate and BPA exposure were associated with higher fixation and lower shift rates, respectively. This suggests that more highly exposed infants were less attentive. However, these data must be considered preliminary at this point due to the small sample size and the highly novel approach that was used. Methods for accurately and precisely coding and analyzing looking behavior of newborn infants are undergoing further development and validation in the lab. Specifically, we are working with a computer vision group to develop automated eye-tracking software that will allow rapid and precise automated coding of newborn and young infant looking behavior either from videotapes or in real time. These procedures will be used both to re-code the existing videotapes and to code data in the larger cohort currently under recruitment. We expect these methods to greatly augment the amount of information that can be obtained from these early measures of cognition.

A visual recognition memory task (VRM) based on the work of Susan Rose, et al. (2001 Dev Psychol) was administered at 7 months (n = 44). Infants were familiarized to two identical faces, and then saw the familiar face paired with a novel one. In models adjusted for multiple covariates including maternal IQ, phthalate exposure was negatively associated with novelty preference (β = -0.37) although the association was not significant in this small sample. This finding, together with the association of phthalate exposure with shift rate at birth suggests that prenatal phthalate exposure may be associated with deficits in basic cognitive abilities including attention and working memory. However, it will be important to confirm these findings in the larger sample once exposure data for the rest of the women are available.

This was a study assessing the impact of prenatal exposure to chemicals on infant outcomes. Therefore, the study population was limited to pregnant women and their infants. Both male and female infants were included and the numbers were approximately equal: 76 female and 81 male infants. The racial/ethnic make-up of the sample reflects that of the patient population at the obstetrical clinic where participants were recruited and is primarily white (81%).

In summary, this pilot research set the stage for future research by successfully developing the infrastructure upon which to build a larger prospective birth cohort and by demonstrating the feasibility of novel approaches to data collection including cognitive assessments of newborn infants in the hospital setting. Importantly, the results of this pilot work also support the hypothesized associations of prenatal exposures with the targeted contaminants. Specifically, both BPA and anti-androgenic phthalates were associated with altered AGD (Table 5). There also were suggestive associations of both BPA and anti-androgenic phthalates with decrements in attention in both newborns and older infants (7 months), and with declines in working memory in the latter age group. Furthermore, although our sub-study of variability in urinary concentrations of BPA and phthalate metabolites in repeated samples across pregnancy (Tables 3 and 4) suggested that first morning urine collections may provide somewhat improved exposure assessment over spot urines, the degree of variability within individuals was still considerable. This information was critical in our decision to collect and pool urine from multiple samples across pregnancy in the future, thus providing a measure of average exposure across pregnancy. We will be able to validate and build on the important preliminary findings from this pilot research with much greater statistical power in the full cohort (n = 500 infants) to be studied as part of our recently funded full Children's Center.