The overall long-term objective of this component of the Consortium for Estuarine Ecoindicator Research for the Gulf of Mexico (CEER-GOM) is to evaluate biomarkers of reproductive function in Atlantic croaker and gulf killifish Fundulus grandis as early warning indicators of fish population hazards resulting from the degradation of estuarine environments. For Atlantic croaker, the specific objectives for Year 3 were to: (1) determine the effects of hypoxia on biomarkers of vitellogenin, estrogen receptor mRNA levels, and hypoxia inducible factor expression in croaker collected from Pensacola Bay, Florida, and in the controlled laboratory study in 2003; and (2) collect croaker from hypoxic and reference sites in the Mobile Bay, Alabama, and compare site differences in selected reproductive indicators. For F. grandis, the specific objectives of Year 3 were to: (1) evaluate the effects of size on reproductive parameters in F. grandis; and (2) compare reproductive biomarker responses in F. grandis collected from hypoxic and normoxic sites in Terrebonne Bay, Louisiana; Pensacola Bay, Florida; and Weeks Bay, Alabama.

Objective 1: Complete Analyses of Reproductive Indicators in Atlantic Croaker Exposed to Hypoxic and Normoxic Conditions in Pensacola/East Bay, Florida, and in the Controlled Laboratory Experiments

Previously, it was shown that circulating levels of estradiol-17β were lower in croaker collected from the hypoxic sites in East Bay, suggesting an impairment of estrogen signaling in the exposed fish. Hepatic estrogen receptor mRNA levels were significantly lower in these croaker collected from the hypoxic sites (P12, P13, P14, PB5; Figure 1) compared to those sampled from the two reference sites (Bridge and Pensacola Bay). Circulating plasma vitellogenin concentrations were dramatically decreased in croaker exposed to hypoxic conditions compared to those under normoxic conditions, further indicating an impairment of estrogen signaling (Figure 2). The decline in vitellogenin levels correlated with the decreased gonadal growth and oocyte development observed previously in these fish from the hypoxic sites. Fish collected in November showed a similar hypoxic site-specific pattern of impaired ovarian development and vitellogenin levels. It is concluded from the field data that the croaker collected from all the low dissolved oxygen (DO) sites in East Bay showed a consistent pattern of impairment of reproductive indicators associated with vitellogenesis, as well as oocyte and gonadal growth and vitellogenin. In contrast, fish collected near the Bridge site with normal DO at the edge of Pensacola Bay, less than 2 miles from some of the East Bay sites, showed normal gonadal development and vitellogenin, as well as ER mRNA profiles. Hypoxia inducible factor 1α (HIF1α), HIF2α, aryl hydrocarbon nuclear translocator 1 (ARNT1), and ARNT2 were cloned from Atlantic croaker and sequenced. Croaker from one of the hypoxic sites (P13) showed approximately a two-fold induction of ovarian HIF 2α mRNA levels compared to fish collected from a reference site (Bridge), suggesting the gene is upregulated in response to environmental hypoxia. 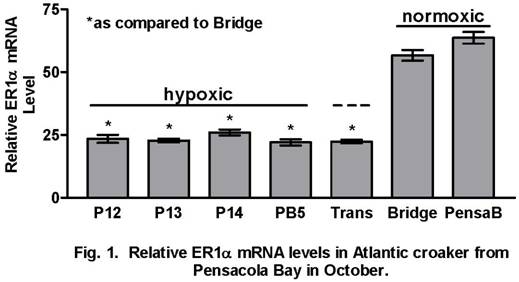 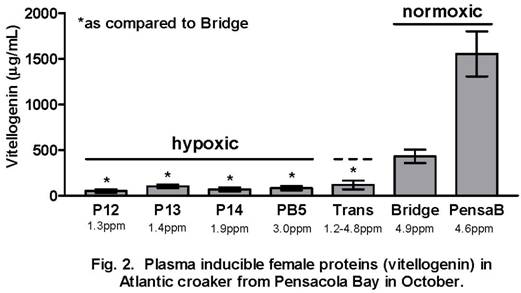 Similar analyses of hepatic endoplasmic reticulum (ER) mRNA levels and plasma vitellogenin concentrations were also conducted with croaker samples from the laboratory hypoxia studies. ER mRNA levels in the livers of female chronically exposed to an intermediate DO level (2.7ppm) were approximately 50 percent those of the control group and showed no further decrease in the low DO group (1.7ppm). Plasma vitellogenin levels showed a similar dramatic decrease in the low DO experimental groups compared to the normoxic controls as observed in the field samples. Thus, the patterns of disruption of estrogen signaling in croaker exposed to low DO in the laboratory and in the field are remarkably similar. The gonadotropin (luteinizing hormone, LH) response to the neuropeptide, LHRH, was examined in croaker exposed to low DO to determine whether the decreased estrogen signaling resulted from impaired neuroendocrine function. Plasma gonadotropin levels 1 hour after LHRH challenge were significantly reduced in croaker exposed to the lowest DO concentration compared to controls (Figure 3), suggesting this environmental stressors is acting, at least partially, at the neuroendocrine level to disrupt reproduction. 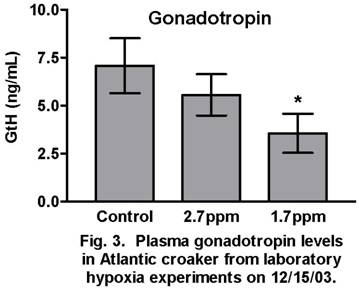 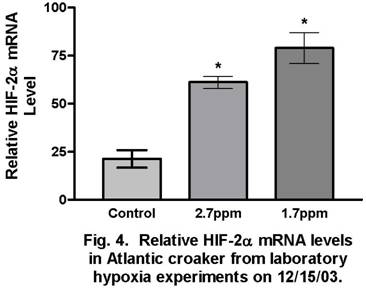 Finally, HIF2α mRNA levels showed a concentration-dependent increase in croaker exposed to low DO in the laboratory, thereby confirming the preliminary results from the field study and further suggesting the potential utility of this measurement as a molecular indicator of exposure to hypoxia.

Objective 2: Collect Croaker From Hypoxic and Reference Sites in the Mobile Bay, Alabama, and Compare Site Differences in Selected Indicators of Ovarian Growth and Vitellogenesis

Hurricane Ivan made landfall at Mobile Bay, Alabama, prior to the sampling in the fall of 2004, dramatically altering the profiles of DO. Analysis of all the DO data collected during the summer and fall in the vicinity of the collection sites is ongoing. Preliminary analyses, however, suggest that two of the sample sites were under hypoxic conditions (sites A and B) for extended periods and two sites (sites C and D) were normoxic for a length of time prior to sampling. Atlantic croaker (30 croaker/station) samples were collected between dawn and noon with a trawl from the four field stations in Mobile Bay, Alabama, twice during the period of gonadal recrudescence (10/5/04 and 10/26/04). The fish were processed on board and the blood, gonadal tissues, liver tissues, and brain tissues were collected for analysis. Male and female fish collected during both sampling periods showed significant inhibition of gonadal growth (GSI) at the high DO sites (Table 1). Histological examination of the ovaries from the females showed that the decreased ovarian growth was associated with a significant decrease in the percentage of oocytes that were fully grown and contained large amounts of yolk reserves (Table 1). Plasma concentrations of vitellogenin were significantly reduced in females from the low DO sites compared to those from the reference sites, and this was associated by minor decreases in ER mRNA levels, as measured by RT-PCR (Table 1). In contrast, plasma estradiol levels varied considerably among the field-caught croaker and did not show site differences, suggesting this measurement may not be suitable as a reproductive indicator for field assessments.

Hypoxia stressor-induced changes in eight out of nine endocrine indicators, and all the morphometric six and functional six reproductive indicators were observed in the controlled laboratory studies. Because reproductive impairment was severe in field-caught fish, some stage specific analyses could not be conducted and others were impractical because the method of collection by trawling (e.g., effects of capture stress on gonadotropin levels). All five endocrine indicators and five morphometric indicators measured in the field samples were significantly altered in fish collected from the hypoxic sites in East Bay/Pensacola Bay in 2003. Four out of the five indicators used to assess ovarian growth and vitellogenesis were significantly altered in females collected from Mobile Bay sites in 2004. It is concluded from these studies that up to 11 reproductive indicators in Atlantic croaker are potentially useful for environmental monitoring. The probability of successfully applying these indicators is considered high, based on the field testing conducted to date.

Objective 1: Evaluating the Effects of Body Size on Reproductive Indicators

Reproductive function in F. grandis was shown to be sensitive to moderate hypoxia in the field. Comparing field sites with differing durations (weeks -months) of diel hypoxia demonstrated variation in temporal sensitivity of indicators. GSI and steroid hormones are reduced in response to short- to medium-term hypoxia while condition factor and vitellogenin are reduced by long term (several months) hypoxia.

All the major objectives of the first 3 years of the project have been completed and the remaining analyses will be completed by June 20. The results of the field studies will be confirmed with follow-up sampling at the same sites in the Pensacola and Weeks Bay systems this year.