Objective 1: Effects of Moderate Hypoxia on Biomarkers of Reproductive Functions in Atlantic Croaker (Laboratory Experiments). To determine the effects of exposure to low DO (hypoxia), three laboratory experiments were completed at the end of January 2004. The first experiment was to determine the effects of 10 weeks of exposure to low DO concentrations on puberty in Atlantic croaker and was completed at the beginning of October 2003. In this experiment, 21 juvenile croaker were put into each of 9 tanks with a recirculating seawater system (3x Control, 3x 2.5 ppm DO, and 3x 1.5 ppm DO). A YSI probe was used to monitor DO, pH, and temperature several times a day. Low DO levels markedly inhibited puberty, gonadal growth, and the early stages of gametogenesis at the beginning of the reproductive season. Plasma steroid levels were low in these early reproductive stage fish and were not significantly different among treatment groups. The steroidogenic enzymes aromatase and 11ß-hydroxylase were detected in early stage ovaries and testes, respectively, but initial analyses showed no clear trends in enzyme expression in the various DO treatment groups.

A second experiment was conducted to determine the effects of 10 weeks of exposure to low DO concentrations on gonadal recrudescence and gamete function. This experiment was begun in October and completed at the end of December 2003. Twenty-one juvenile croaker were put into each of 9 tanks with a recirculating seawater system (3x Control, 3x 2.5 ppm DO, and 3x 1.7 ppm DO). DO, pH, and temperature were monitored as before. Exposure to low DO significantly impaired gonadal growth as assessed by measurement of gonadosomatic index (GSI) in both females and males. Histological observations of the gonads revealed impairment of gametogenesis during the later stages of gonadal recrudescence. All stages of spermatogenesis were observed in the testes in male fish exposed to normoxic conditions, but the size of the testicular lobules and volume of spermatozoa in the hypoxic fish were dramatically reduced. In females exposed to hypoxia, the number of yolky oocytes dramatically decreased, and the number of atretic oocytes and the amount of phagocytizing degenerating material in the ovary were increased compared to controls. Significant decreases in plasma 11-KT and E2 levels also were evident in hypoxic female and male fish, respectively. Plasma levels of 20ß-S were decreased in males exposed to low DO concentrations. Gamete quantity in both males and females (fecundity) were significantly impaired in both low DO groups. In females, the average number of yolky oocytes (batch fecundity) was 153.4 x 103 in the control group, 58.6 x 103 in the 2.7 ppm DO group, and 20.5 x 103 in the 1.7 ppm DO group. In males, sperm production in the low DO groups was less than 30 percent of that of the controls. Gamete function also was compromised in males and females exposed to moderate hypoxia. The percent motile sperm in the control (DO 7.0 ppm), the DO 2.7 ppm, and the DO 1.7 ppm groups was 72.5, 66.8, and 66.6, respectively. The finding that an in vitro 20ß-S treatment significantly increased the percent motile sperm in the low DO treatment groups to values similar to the control group suggests a possible deficit in secretion of this hormone in males. Oocytes from low DO donors showed an impaired ability to undergo oocyte maturation in an in vitro bioassay in response to hormonal treatment. These results indicate that the endocrine and gonadal activities and gamete production were inhibited by chronic exposure to hypoxia during the period of gonadal recrudescence.

A third experiment was to determine the effects of 10 weeks of exposure to low DO concentrations on spawning success, hatching success, and larval survival; it began in November 2003, and was completed by the end of January 2004. Fifteen fish for each treatment group were divided among three tanks and exposed to 2.5 ppm DO, 1.7 ppm DO, and 7.0 ppm DO (control). Pairs of fish (1 male and 1 female) were injected with luteinizing hormone-releasing hormone (LHRH) and placed into the spawning tanks to induce spawning. Reproductive success (fertilization success through larval survival) was markedly decreased in offspring of fish exposed to the lowest DO levels. Fertilization success and 48-hour after larval survival rates were 82.8 and 45.8 percent in the control group, 10.7 and 4.6 percent in the 2.7 ppm DO group, and 10.4 and 4 percent in the 1.7 ppm DO group, respectively. Collectively, it can be inferred from these results that exposure to low DO dramatically impairs reproductive function in Atlantic croaker at three different stages of its reproductive life history cycle: during puberty and initiation of recrudescence, during gametogenesis, and during spawning (see Table 1).

Objective 2: Compare Reproductive Biomarker Responses in Croaker Collected From Degraded and Reference Sites in the Gulf of Mexico Estuaries. For field studies, Atlantic croaker (30 croaker/station) were collected between dawn and noon with a trawl from field stations in Pensacola Bay and East Bay, FL, during August 2003 (four stations), October 2003 (seven stations: P12, P13, P14, PB5, Transition, Bridge, and Pensacola Bay), and November 2003 ( seven stations), representing different phases of the reproductive cycle of croaker. DO (at the bottom and at the surface), temperature, and salinity were recorded at the time of collection. The fish were processed on board, and the tissues (gonads, liver, brain) and the blood were collected. Gonadal samples were preserved in formalin and Gilson's solution for 1 month for histological observation and fecundity estimation, respectively. Small pieces of gonads, liver, and brain tissues also were frozen on dry ice for subsequent estrogen and progesterone receptor mRNA analyses. Plasma samples also were preserved at -80°C for hormone measurement. Upon return to the laboratory, gonadal tissues were weighed and GSI was calculated. Fish collected at the end of August had not begun to undergo significant gonadal development and did not show any significant differences between sites. No fish could be collected from site P14 on 3 separate days of sampling. These results are useful as a baseline for the later collections. Fish collected in October from the normoxic sites were undergoing gonadal recrudescence, whereas there was a significant decrease in gonadal growth in both male and female fish collected from the low DO sites. Histological observations clearly showed a strong correlation between gametogenesis and DO levels. At lower DO sites, gametogenesis was greatly impaired and the gonads were fully occupied by immature germ cells, whereas both males and females at the two normoxic sites (Bridge and Pensacola Bay) had fully mature gonads. The testes were densely packed with spermatozoa, and a large number of spermatozoa also were observed in the sperm duct. In females, many late vitellogenic oocytes were observed in the ovaries. Gamete production for both males and females was significantly higher at the normoxic compared to the low DO sites (see Figures 1 and 2). 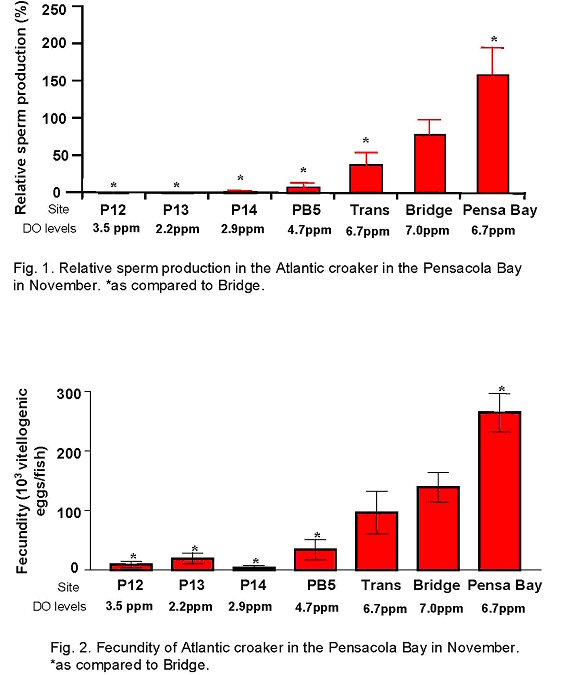 Plasma levels of 11-KT in males and E2 in females correlated with gonadal growth and gametogenesis; fish collected form the normoxic sites had higher steroid hormone levels than those collected from the low DO sites (see Figure 3). Fish collected in November showed a similar site-specific pattern of gonadal development and hormonal profiles as observed in October. It is concluded from the field data that the croaker collected from all of the low DO sites in East Bay showed dramatic impairment of gonadal growth and hormone production, and most likely, would not have contributed to the spawning population in the fall of 2003. In contrast, fish collected near the bridge site with normal DO at the edge of Pensacola Bay, less than 2 miles from some of the East Bay sites, showed normal gonadal development and hormonal profiles. These results suggest that the impairment observed in the East Bay sites is related to the fish experiencing prolonged exposure to low DO. 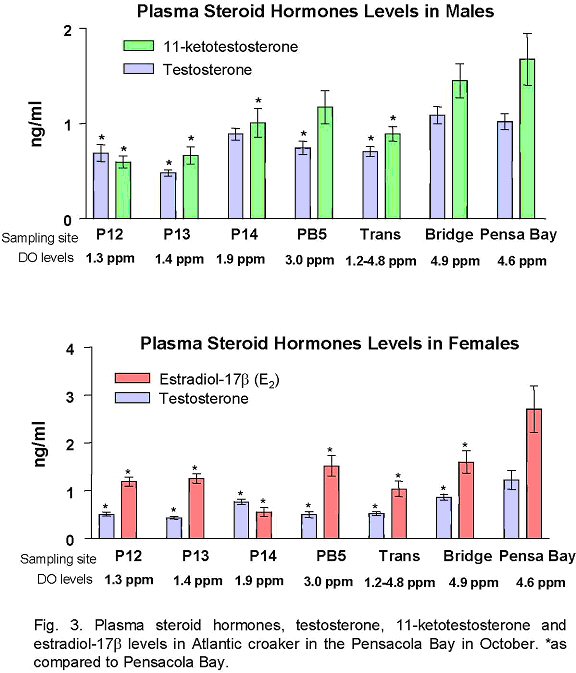 Objective 1: Comparison of Reproductive Biomarkers in F. grandis Captured From Hypoxic and Normoxic Sites in Terrebonne Bay, LA, and Pensacola Bay, FL. Male and female F. grandis were sampled from moderately hypoxic and normoxic locations in Terrebonne Bay, LA, from July 2002 to April 2003. Both sexes showed seasonal variation in GSI and steroid hormones, and females showed seasonal variation in vitellogenin (VTG), as expected. Female reproductive effort varied between sites but not in a consistent direction. All measures of male reproductive effort were significantly lower at the moderately hypoxic site in July, the later part of the spawning season, but did not vary between sites in April, the early part of the spawning season. This suggests that hypoxia suppresses reproduction after long-term exposure. However, the moderately hypoxic site also had lower salinity, so interpretation of hormone and GSI data was confounded.

Male and female F. grandis were sampled from the marsh at Garcon Point in Pensacola Bay from July 2003 to November 2003. Male steroid hormones, but not GSI, showed significant seasonal variation. Female GSI and estradiol, but not testosterone or vitellogenin, showed significant seasonal variation. In July, the DO level varied slightly at different sites within Garcon Point marsh, but only female E2 level was significantly positively correlated with DO at the capture site. Because not enough variation in DO was observed within the marsh, we began sampling at two additional marsh sites (Indian Bayou and Mulatte Bayou) in Escambia Bay in November 2003. The expanded sampling will allow comparison of DO effects on wild fish in Terrebonne Bay and Pensacola Bay.

Objective 2: Experimental Evaluation of the Effect of Hypoxia on Reproduction. We predicted that exposure to chronic hypoxia would shift energy away from reproduction, and therefore, we would see decreased GSI, circulating sex hormones, VTG, and egg production. In July 2003, we completed laboratory exposures to test this hypothesis. Adult F. grandis were sorted into size-matched mating groups of 1 male and 2 females. Mating groups were placed in a flow-through system providing chronic hypoxia (< 20 percent DO, n = 8 groups) or normoxia (> 80 percent DO, n = 8 groups) on a 16:8 L:D cycle, 27°C, 15 ppt salinity. Reproduction was significantly reduced by hypoxia. Males had lower GSI and lower androgen levels. Females had significantly lower GSI and slightly lower E2 levels, but T was not significantly reduced nor was VTG. Egg production was significantly reduced in hypoxic groups, even though VTG levels were unchanged and the number of days per spawning cycle was less.

All of the major objectives of the first 2 years of the project have been completed, and the remaining analyses will be completed before the start of the next reproductive season in the fall. Reproductive function in Atlantic croaker and F. grandis was shown to be sensitive to moderate hypoxia in both the laboratory and field studies. The results of the field studies will be confirmed with followup sampling at the same sites in the Pensacola Bay system this year. A broad range of reproductive and endocrine biomarkers were altered in both the laboratory and field studies, and in general, there was good agreement between the results obtained from the two types of studies and the two species. It is concluded that the majority of the measures of reproductive and endocrine functions examined to date are promising as ecological indicators and deserve further evaluation.

We will continue to compare DO effects on wild fish in Terrebonne Bay and Pensacola Bay, and we will complete the remaining analyses before the start of the next reproductive season. In addition, we will confirm the results of the field studies with followup sampling at the same sites in the Pensacola Bay system.