This project was conceived with several goals in mind: to improve health of residents and tourists by providing potable water, to prevent nutrient pollution or pathogen contamination through improved wastewater treatment, and to use wastes as resources, providing energy in the form of biogas from anaerobic digestion. These practical concerns are a part of the greater task which is to reduce the impact of ecotourism on the local environment.

The project aims to develop and install potable water filters, solar-assisted biodigesters, and treatment wetland systems while promoting sustainable development in the Shuabb community. The specific objectives are to:

System installation. The system was installed over the course of four trips. One anaerobic digestion tank, the solar thermal panel and heat transfer system, the gas collection and storage system, and a water storage tank were installed during the first trip in January 2017.

Additionally, the hole for the wetland was dug, the wetland drainage systems placed, and covered with gravel from a nearby riverbed. In between January and May, community members filled the wetland with sand and finished digging the hole for the second digester tank. Three students then traveled in May 2017 to finish the installation. After connecting the second digester tank, the team planted the wetland, fixed some leaks in the first digester tank, and installed gas distribution with lamps. Additionally, the team installed the potable water filter and showed community members how to take and analyze samples for the systems. 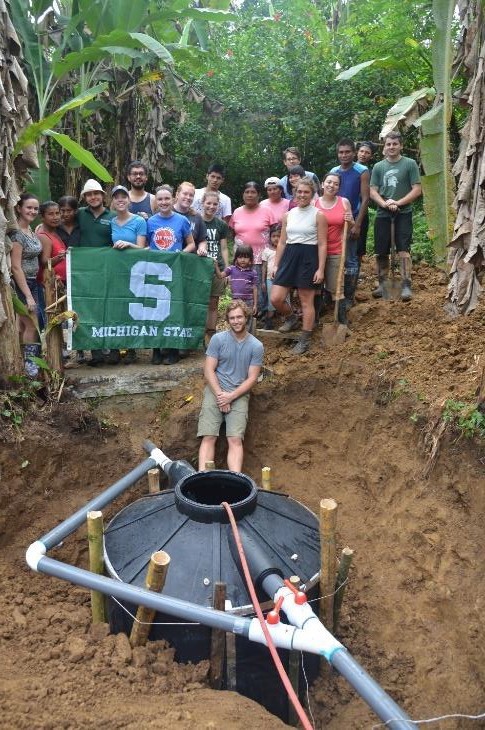 Group photo at the end of first implementation trip. 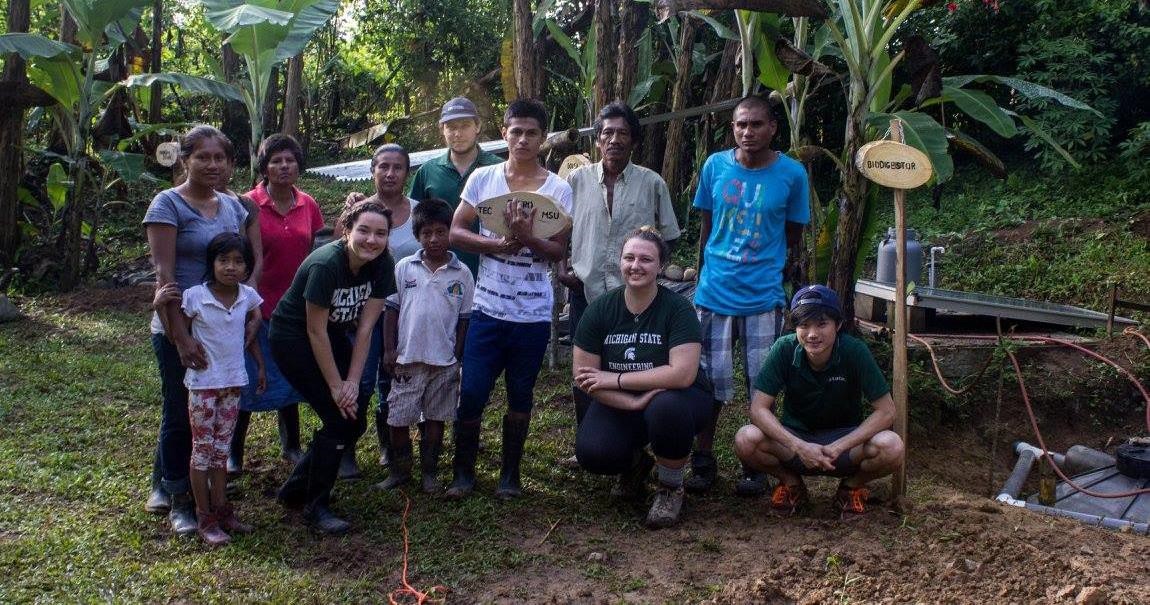 Group picture at end of second implementation trip. On the right side of the photo, the solar thermal panel and second biodigester. 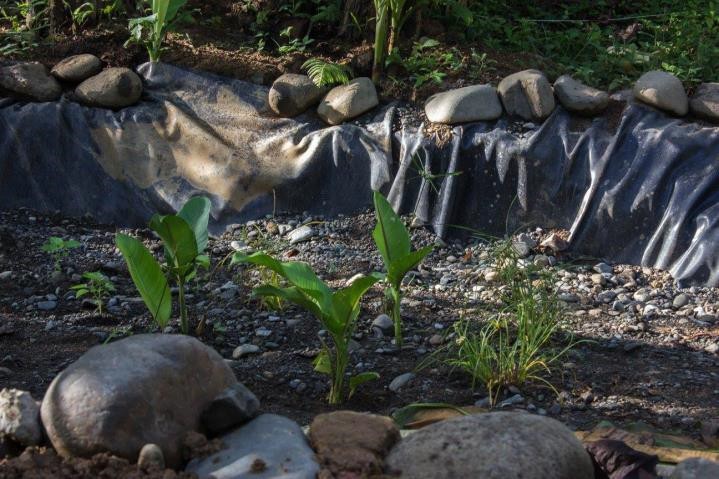 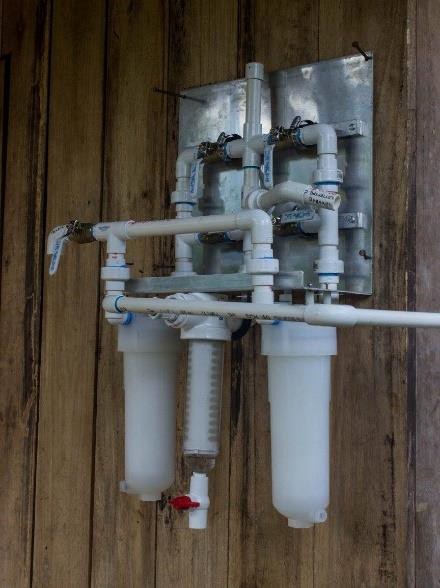 The following year, the community reported some issues with the installed systems. Algal growth had contaminated the water filter, so a replacement was ordered. Additionally, biogas had yet to be produced. Through problem shooting with our Costa Rican colleagues, it was concluded that the lid closure was not air tight, which allowed for waste treatment, but not the anaerobic conditions required for biogas production. Lastly, the community was noticing slow drainage between the kitchen and the digesters, including some back up. A subsequent trip was planned, during which a new water filter was installed and modified to prevent exposure of the filters to sunlight and new lids were installed. Additionally, photovoltaic panels were installed on the roof of the bathrooms to provide backup lighting for when the biogas production was minimal (i.e., at the start of the tourist season). Lastly, a grease trap was installed between the kitchen and the digesters.

Due to a change in leadership at the school, we were unable to install a digester system there; however, we did install a potable water filter and interacted with the students through demonstrating macroinvertebrate testing. As the new teacher wished to completely redefine the scope of the project, we were unable to reach a compromise allowing us to install the second system in whole.

Improved drainage. During the first implementation trip, three students conducted an informal survey of the site (i.e., yardsticks, tape measures, ropes, and rope levels were used instead of professional surveying equipment due to lack of availability). Between January and March 2017, these students created a drainage plan for the site to be installed by the community.

Kitchen waste was rerouted into the digester. Systems to prevent overtopping of the water reservoirs were designed (and installed in March). These two approaches resolved most of the drainage issues on the northwest third of the site. For the remainder of the site, vegetated channels were recommended on the west and east sides of the site to channel rainwater away from the ecolodges; however, since most of the muddy conditions were due to the direct impact of rain, and not runoff, the students and community installed stepping blocks in the main pathways of the site. Lastly, the effluent of wetland was discharged into a vegetated channel and it was recommended that the community put in a conduit underneath the access road to limit collection of water at the entrance of the site.

Website. Website descriptions of the project were created and uploaded to https://shuabbecotourism.wordpress.com/. The following is an excerpt from the site:

Our team has designed a wastewater treatment and energy production system utilizing basic mechanical and biological processes and without the need for electricity. First, water is directed from a nearby creek to a small settling tank. It is then distributed to the kitchen (where it is filtered), showers, and latrines. The waste water is piped downhill to a solar-assisted anaerobic digester where bacterial colonies remove pathogens and produce usable biogas. As water exits anaerobic treatment, it enters a constructed wetland where bacteria and plants work to further purify the water output of the digester. This water then flows through a drainage ditch and safely returns to the watershed. This integrated design can allow for ecotourism at the site while protecting the surrounding ecosystems. Our goal is to combat larger global issues and promote sustainable development.

Students. Throughout September through December 2015, a team of approximately 20 undergraduates and 2 graduate students optimized the proposed design of the solar-assisted anaerobic digester, water treatment, and wetland systems, sourced materials, and figured out transportation logistics. During the remainder of the grant, four visits to the Shuabb community were made, during which systems were installed. A total of 14 MSU students participated in installation and community training over the four trips. Additionally, five Costa Rican students helped with installation and signage at the site.

Quantifiable benefits to people, prosperity, and planet. The ecotourism site has hosted over 500 tourists since the inception of the project. While rates and costs of food vary, the ecolodge charges on average $60 per person per night (including food), with food costs of approximately

$30. As the Shuabb Association of Women both runs and staffs the ecotourism site, labor is paid through profit sharing. Additionally, through provision of biogas and solar power, provision of electricity with a diesel generator is eliminated. As such, the site has provided at least $15,000 to members of the Shuabb community.

Additionally, the community has benefited through provision of clean drinking water. Students at the elementary school (~20 – 30) are provided with clean drinking water during school hours and take home clean water to their families for drinking. When tourism is low and there is sufficient stored water, community members are also invited to use water from the filters.

Concentrations of the fecal coliforms in the source water are >300 CFU/100 mL; this is reduced to approximately 30 CFU/100 mL through the swirl filter and water storage and subsequently reduced to non-detectable levels by the filters. Consequently, the 24 families living in Shuabb all benefit from the project.

The project has benefited the planet through reduction of nutrient loads from the ecotourism site. Due to the religious taboo of touching human waste, we were unable to monitor the bacterial and nutrient load of waste into the biodigester and wetland as regularly as planned. However, our Costa Rica collaborators were able to collect samples from the wetland influent and effluent of once every one to two months. Concentrations of fecal coliforms were <50 CFU/100 mL in the wetland effluent. Nitrate and phosphate concentrations were less than 20 ppm nitrate and 4 ppm phosphate in the wetland effluent, as measured by Lamotte GREEN water chemistry kits. As the Lamotte kits are semi-quantitative, it is not appropriate to report an average concentration for the nutrients. 60% of samples had <5 ppm nitrate, while the remainder had 5 – 20 ppm nitrate. 50% of samples had <1 ppm phosphate, 40% had 1 – 2 ppm phosphate, and 10% had 2 – 4 ppm phosphate.

Qualitative benefits to people, prosperity and planet. Through provision of clean water, energy, and waste treatment at the ecotourism site, the Shuabb community is able to honor its culture while earning income.  In addition to the direct financial gain, the ecotourism site provides clients for an organic farm tours, waterfall hikes, boat tours, and Bri Bri crafts. Thus, the financial and economic benefit of the ecotourism side extend beyond the active members of the ecotourism site. The community has also networked with nearby Bri Bri communities to create trips featuring stays within in multiple communities. Through these activities, the Bri Bri culture is being shared with Costa Ricans and other tourists.

In addition to the direct benefits (i.e., clean water, renewable energy, and waste treatment) provided by the project, the impact of the projects has expanded to nearby Bri Bri communities. Our Costa Rican collaborators have traveled to nearby ecoresorts to demonstrate the water filter technology; additionally, the community has invited ecoresort operators to visit the site and see how the system operates. Two ecoresorts have expressed interest in adopting similar systems.

The project also helped prepare MSU students for careers requiring success in both engineering and cultural understanding. While not formally surveyed, students shared their feedback on the experience through personal conversations, presentations, and scholarship applications. For example:

In conversations with the PI, students expressed that the two most signficant lessons learned were: (1) learning how to work with a non-technical community of a different cultural background and (2) adapting “theoretical” engineering designs to working solutions in the field. An example of both of these lessons occurred when students (and the faculty) realized that touching of human waste was religiously taboo to the Bri Bri and not just distasteful. This misunderstand was not recognized until the second installation trip, in part due the use of three languages in this project. While most Bri Bri speak both Bri Bri and Spanish, they have little need to discuss their religious or cultural views in Spanish. Consequently, when we began to install the pipes for the wetland and placed the wetland influent distribution pipe on the top of the media, the Shuabb community members became agitated. After sitting down with the community members (with translation from Bri Bri to Spanish to English), the students learned that, while the community members understood there was minimal health risk to the initial design, the waste needed to be ‘cleaned by nature’ prior to potential exposure. Placing the influent beneath the wetland media resolved this issue, but required in-time calculations of head and slope. That evening, as we debriefed, the students emphasized the importance of sharing details of a design to its users and utility of simplified figures to communicate with a non- technical audience.