2012 Progress Report: Environmental Behavior And Bioavailability Of Ag And Ceo2 Nanoparticles: The Role Of Surface Functionalization and its Interaction with Natural Organic Substances and Iron Oxohydroxides

Progress towards testing the hypotheses:
We have developed a method to synthesize ultra-small CeO2 particles that exhibit reversible transitions in redox state (between the +III and +IV valence states). The particles are synthesized with a dextran coating. We have developed techniques to manipulate the charge of this coating (positive, negative and neutral) and will be experimenting with manipulating the molar mass of the coating. This has enabled us to begin testing hypotheses about the role of coating charge and molar mass on toxicity in C. elegans. We have conducted experiments that examine how these coatings with different charges influence interactions between the particles and natural organic matter. We have investigated how organic matter alters the bioavailability and toxicity of CeO2 as a function of the positive, negative and neutral coatings. We completed experiments in conjunction with partners at the Center for Environmental Implications of NanoTechnology (CEINT), examining how Ag nanoparticles with different coatings are affected by natural organic matter released by aquatic plants and how this in turn affects the fate and toxicity of these particles.
We developed a method to synthesize ~4 nm CeO2 particles using dextran as a coating (Figure 1). Dextran (dex) is a non-ionic coating and thus has no charge. We then developed techniques to conjugate these particles to convert the coatings to either carboxymethyl-dextran (CM), which has a negative charge over a wide pH range, and diethylaminoethyl-dextran (DEAE), which has a permanent positive charge. The particles display auto-catalytic redox behavior. For example, they can be oxidized by H2O2, causing a color change from yellow to bright orange. Over 24-48 hours, the absorbed oxygen is released in the form of O2 gas, and the color shifts back to yellow. The change in oxidation state is being confirmed with X-ray photoelectron spectroscopy. In the future, we anticipate that we will also be able to manipulate the molecular weight of these coatings. Thus we will have created a library of particles with identical CeO2 cores where we can manipulate the charge and molecular weight of the coatings. 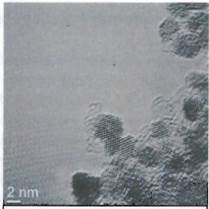 Figure 1. High resolution TEM image of CeO2 particles taken with an advanced electron microscope (FEI Titan). The 10 kDa dextran coating can actually be seen attached to the surface.
Experiments comparing the interaction of natural organic matter (Suwannee River humic and fulvic acids) with DEX, DEAE and CM in either DI water or moderately hard reconstituted water have yielded interesting results. The moderately hard water itself shifts the pH of zero net charge of the DEX particles (PZC) from about 7.2 to around 6.0. Experiments with individual components demonstrated that this was due to sulfate, likely due to formation of an inner-sphere complex with the ceria surface (data not shown). In the absence of NOM we found that our DEX particles had variable charge depending on pH and water chemistry, while DEAE particles have positive charge and the CM particles had a negative charge over a wide range of potential ambient pH values (4-9) in realistic media (reconstituted hard water). Organic matter had a more profound effect, shifting the PZC of the DEX particles to around pH 4. On the other hand, the DEAE CeO2 had PZC of around 1213 and the NOM only shifted the PZC slightly to around pH 11. We had anticipated that interaction with organic matter would dominate the surface chemistry. We explored the importance of the ratio of organic matter to particles and found that at a 1:1 ratio of organic matter to DEAE CeO2, a charge reversal occurs resulting in aggregation of the particles. This indicates that under realistic conditions, even the positively charged particles would carry a net negative charge. We developed techniques that take advantage of fluorescence quenching to investigate binding of Pahokee peat organic matter to DEX, DEAE, or CM coated CeO2. Contrary to our initial hypothesis, the NOM actually had a higher affinity for neutral (DEX) particles than negatively (CM) or positively (DEAE) charged particles. We hypothesized that positively charged particles would have a greater affinity for negatively charged organic matter. We believe that the permanent positive charge causes the dextran molecules to have an uncoiled conformation, providing steric hindrance that inhibits contact between the NOM molecule and the particle surface.
In the absence of NOM, we have observed a profound difference in the toxicity of CeO2 depending on the coating. For example, when investigating 48 hour mortality in C. elegans. We found that the DEAE particles were about 100 times more toxic than the CM or DEX particles (Figure 2). We are currently investigating a more sensitive endpoint, reproduction. We are finding the sample pattern of relative toxicity to be true for reproductive toxicity, with the DEAE particles being far more toxic. Reproductive toxicity endpoints are being developed for use in 2D redox proteomics experiments to begin in late spring 2013, which will elucidate the molecular targets of toxicity of the particles with different coatings. We have found that DOM interaction with the particles reduces their toxicity. Detailed experiments are currently underway demonstrating this effect for DEAE particles. 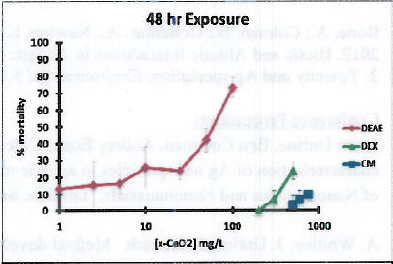 Figure 2. 48-hour mortality in C. elegans exposed to CeO2 particles with either dextran (DEX), diethylaminoethyl dextran (DEAE) or carboxymethyl dextran (CM).
Spatially resolved XANES demonstrated that while Ce in the particles as synthesized was mainly in the +IV valence state in the exposure media, Ce associated with nematode was present as a mixture of +III and +IV valence state Within C. elegans, the surface charge of CeO2 NPs significantly influenced the proportion of the two valence states, with a higher proportion of Ce +IV in DEAE CeO2 NP exposed C. elegans than in DEX and CM CeO2 exposed animals. These results suggest that the coating surface charge influenced the Ce speciation in C. elegans and that the mechanism of toxicity may involve oxidation of biomolecules coupled with reduction of Ce in the particles.
Synchrotron based X-ray fluorescence imaging indicated that the positively charged DEAE NPs were bioaccumulated to a greater extent than the DEX and CM NPs. The addition of NOM, a humic acid standard, to the more toxic NPs, DEAE CeO2, decreased the toxicity even at low NOM concentrations. NOM caused DEAE NPs to aggregate in the exposure media, but the size and stability of the aggregates were dependent of the ratio between NOM and NPs. The µXRF measurements showed that the Ce accumulation in C. elegans exposed to a low ratio of NOM to DEAE CeO2 NPs was higher than without NOM, but the Ce accumulation was lower when C. elegans were exposed to a higher ratio i.e. a higher NOM concentration than NPs. These results show that NOM decreased the toxicity but different mechanisms are involved and depend on the nature of the interaction between NOM and NPs and the resulting aggregate structure.
We have also performed experiments in collaboration with CEINT demonstrating that Ag NPs with polyvinylpyrrolidone (PVP) coatings are not oxidized by exudates from aquatic plants, while particles with gum arabic coatings are oxidized, resulting in dissolution. The plant organic matter actually stabilized the PVP coated AgNPs, preventing their aggregation. The Ag NPs themselves stimulated the aquatic plants to release the exudates. The results have important implications because they suggest that manufactured particle coatings influence the biotic and abiotic modifications of Ag NPs. We demonstrated that these OM modifications also decrease the toxicity of the particles. These results are in press in Unrine et al. (2012). Additional results from this experiment are in review in Bone et al. (2012).

Journal Articles on this Report : 5 Displayed | Download in RIS Format