Final Report: Development of Environmental Indicators of Condition,Integrity, and Sustainability in the Coastal Regions of the US Great Lakes Basin

The goal of this research collaboration was to develop indicators that both estimate environmental condition and suggest plausible causes of ecosystem degradation in the coastal region of the U.S. Great Lakes. The collaboration consisted of eight broad components, each of which generated different types of environmental responses and characteristics of the coastal region. These indicators included biotic communities of amphibians, birds, diatoms, fish, macroinvertebrates, and wetland plants as well as indicators of polycyclic aromatic hydrocarbon (PAH) photo-induced toxicity and landscape characterization. These components are summarized below and discussed in more detail in the individual Final Reports for projects R828675C001–R828675C005.

The major question addressed was, “What environmental indicators can be developed to efficiently, economically, and effectively measure and monitor the condition, integrity, and long-term sustainability of the coastal region of the U.S. Great Lakes?”

Our specific objectives were to: (1) identify environmental indicators that are useful for defining the condition, integrity, and change of the ecosystems within the coastal region; (2) test indicators with a rigorous combination of existing data and field data to link stressors of the coastal region with environmental responses; and (3) recommend a suite of indicators to guide managers toward improved management decisions.

This reports summarizes a 5-year effort to test many of the proposed indicators for the coastal region. It includes revisions of some of the existing indicators and the development of new indicators to measure conditions and find potential causes of impairment within the U.S. Great Lakes coastal region.

Investigators of this collaboration have had extensive interactions with the Great Lakes community. For instance, the Lake Erie Lakewide Management Plan (LaMP) has adopted many of the stressor measures as integral indicators of the condition of watersheds tributary to Lake Erie. Furthermore, the conceptual approach and applications for development of a generalized stressor gradient have been incorporated into a document defining the tiered aquatic life criteria for defining biological integrity of the nation’s waters.

A total of 14 indicators of the U.S. Great Lakes coastal region are presented for potential application. Each indicator is summarized with respect to its use, methodology, spatial context, and diagnosis capability. In general, the results indicate that stress related to agricultural activity and human population density/development had the largest impacts on the biotic community indicators. In contrast, the photoinduced PAH indicator was related primarily to industrial activity in the U.S. Great Lakes, and more than one-half of the sites sampled were potentially at risk of PAH toxicity to larval fish. One of the indicators developed for land use/land change was developed from Landsat imagery for the entire U.S. Great Lakes basin and for the period from 1992 to 2001. This indicator quantified the extensive conversions of both agricultural and forest land to residential area that has occurred during a short 9-year period.

Considerable variation in the responses was manifest at different spatial scales and many at surprisingly large scales. Significant advances were made with respect to development of methods for identifying and testing environmental indicators. In addition, many indicators and concepts developed from this project are being incorporated into management plans and U.S. Environmental Protection Agency methods documents. Further details, downloadable documents, and updates on these indicators can be found at the Great Lakes Environmental Indicators (GLEI) Project Web Site.

The Great Lakes basin encompasses more than 760,000 km2 with the land area encompassing more than 515,000 km2. The U.S. portion of the land area includes more than 290,000 km2 with a total shoreline length of more than 7,800 km. The coastal region borders eight states and the Canadian province of Ontario. A boundary in climatic and physiographic features divides the basin into two broad regions of nearly equal size: the Laurentian Mixed Forest and the Eastern Broadleaf Forest provinces. General patterns of human activity and land use differ between provinces, with most agricultural activities occurring in the southern portion of the basin, whereas the northern portion of the basin remains largely forested. The southern portion contains deeper, more permeable, and highly buffered soils in comparison with the northern portion. Metropolitan areas are more common in the southern basin. We restricted this collaboration to the U.S. Great Lakes coastal region, primarily because of monetary and logistical limitations; however, most of the results are applicable to the entire Great Lakes ecosystem.

Our primary goal was to ensure that we distributed our sampling across the major axes of stress in the coastal region of the U.S. Great Lakes. In this way, our sampling represented a natural experiment in which biotic communities are examined across gradients of stress. We partitioned the entire U.S. Great Lakes coastline into 762 coastal watersheds, or “segment sheds.” Each segment shed consisted of the land area delineated by: (1) a segment of shoreline extending in both directions from the mouth of a second order or higher stream to one-half the distance to the adjacent streams, and (2) the associated drainage area. Segment shed area ranged widely, from 30 ha to 1.7 million ha. The number of segment sheds by lake is as follows: 102 in Lake Erie, 148 in Lake Huron, 157 in Lake Michigan, 90 in Lake Ontario, 12 in Lake St. Clair, and 236 in Lake Superior. An additional 17 segment sheds were found in connecting channels between the lakes.

Within each segment shed a total of 207 stress variables from 19 different data layers were compiled in a geographic information system (GIS). Each of the data layers was available from publicly available databases and in digital format. These data layers were classified into six major categories of stress within the Great Lakes including agricultural activity (21 variables), atmospheric deposition (11), land use/cover (23), human population and development (14), point source and non-point sources (79), and specific shoreline characteristics (6), plus one natural category, soil characteristics (53).

We employed a variety of multivariate statistical techniques including principal components analysis to reduce the dimensionality in these data and clustering techniques to identify groups of sites with similar stress profiles. A random stratified sampling design was used to select segment sheds from clusters with similar stress profiles while considering provinces and individual lakes. At the segment shed level, there were many sites that could be sampled. We also employed a random selection procedure as well as assessed access to select sites of various hydro-geomorphic types within a segment shed. Hydro-geomorphic types included the following: open-coast wetlands, riverine wetlands, protected wetlands, high energy shorelines, and embayments. Specific study site types were selected if they were relevant to a component. For instance, aquatic organisms were not studied in upland terrestrial areas nor were wetland plant communities studied in high energy shorelines. Final selection of study sites also was designed to maximize overlap, and thus integrate, across the different components of the study. For instance, because of the nature of the biological response, the contaminants component could sample the fewest sites, whereas the bird and amphibian subcomponent could sample hundreds of sites. Hence, most of the components sampled the contaminant sites and the bird and amphibian component sampled the most sites.

Our basic approach to analysis was exploratory, in which the various environmental patterns (e.g., biological communities) were examined relative to the stress gradients. To reduce the number of potential relationships, each component identified stress gradients that were most relevant to the biota they sampled. The basic premise of these analyses was to explore whether there was a relationship between stress and biota. In most cases, each component also used a training set/test set approach in which the strength and predictability of the relationship was examined. These stress-biota response relationships also were examined over a wide variety of spatial scales to identify the appropriate scale in which the response could potentially be applied. For instance, because the stress variables were compiled in a GIS, calculations over many spatial scales were possible. The original selection of samples sites was based on stress variables calculated at the level of the segment shed, while most stress-response relationships for wetland complexes presented in the final analysis were based on stress variables calculated at the watershed level. However, we also explored stress-response relationships at various buffer distances from the specific sampling locations such as 500 m, 1000 m, or 5000 m buffers.

The stress gradients represent pressure indicators as defined by the State of the Lakes Ecosystem Conference. These gradients can be used individually to examine ecological changes associated with such activity as agriculture, human populations, or other stressors like atmospheric deposition. We explored each of these gradients in detail but also calculated an overall stress gradient in which all categories of stress were combined into one overall stress index. This stress index represents the integration of all 207 individual stress variables that were originally gathered and retains a high proportion of the variation in those original variables. We used this stress index to estimate the overall condition of the 762 segment sheds within the U.S. Great Lakes watershed. This stress index could be periodically evaluated to quantify the trend in condition of the U.S. Great Lakes coastal region. The stress index was evaluated by most of the components as a broad indicator of stress in the coastal region of the U.S. Great Lakes.

A final phase of the analysis included an integration phase in which we simultaneously analyzed the responses of amphibians, birds, diatoms, fish (sampled by electro-fishing and fyke nets), macroinvertebrates, and wetland vegetation in relation to biogeography (lake and province), hydro-geomorphic type, and the overall stress index. These considerations are critical for actual application of state (response) indicators because, in practice, one must know where to apply an indicator and whether there is a relationship to a potential stress. We used a hierarchical variance partitioning technique to identify the relative contribution of these major factors in an exploration of 66 individual state indicators. Furthermore, we also explored these same 66 indicators in an analysis of three major stressors (agriculture, human population/development, and point sources) with classification and regression trees. This analysis is in a preliminary status. 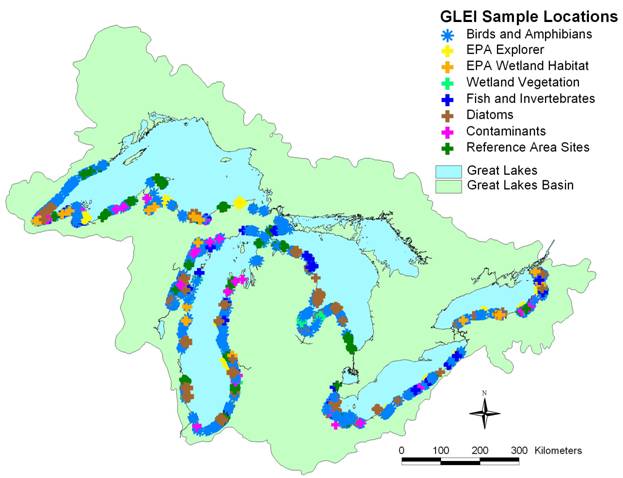 The analysis of 66 indicator response variables for amphibians, birds, diatoms, electro-fish, fyke net fish, macroinvertebrates, and wetland vegetation by lake, province, hydro-geomorphic type, and the stress index revealed that lake was, on average, most important in explaining variation among the variables. This reveals that many of the indicators will need to be developed on a lake-by-lake basis. A surprising result was that hydro-geomorphic type was relatively unimportant for most of the variables, except for macroinvertebrates. Province also was not very important in explaining overall variation, but that was partially because lake and province are high related by common biogeography and lake had slightly better explanatory power over province. Indicators related to birds were among the best explained by the stress index. This indicates that birds may be among the better indicators that can be related with the stressors included in the overall stress index. In general, these results provide solid guidelines for examination of further relationships among the variables and for the refinement of indicators. These results are summarized more thoroughly in a manuscript that is submitted.

The second analysis used the same 66 indicator response variables, but focused on further evaluation of stressors and more than 5 spatial scales, including 100, 500, 1000, and 5000 m buffers and at the whole watershed scale. At each of these scales, stress was calculated by the proportion of row crop to represent agricultural stress; the proportional sum of low and high intensity urban, commercial/industrial, and road surface land to represent human development stress; and an index of point source and contaminant stress to represent pollution. The results indicated that the watershed scale was, in general, the best spatial scale for classifying the indicators. Row crop and human development were more related to the indicators than to the pollution variables, but we emphasize that the major contaminant responses were not included in this analysis. The biotic communities, however, were more highly related with the land use variables (agriculture and human population density/development) compared with pollution sources. These results also are summarized more thoroughly in a manuscript that is in review.

Indicators developed for the Great Lakes coastal regions are summarized in Table 1.