The Center for Advancing Microbial Risk Assessment (CAMRA) has finished its work under the EPA STAR grant funded from 2005 through March 2013. CAMRA had two missions. The first was to develop models, tools and information that will be used in a credible risk assessment framework to reduce or eliminate health impacts from deliberate use of biological agents of concern in the indoor and outdoor environment.

To accomplish this first objective, the five project teams (associated with Project I: Exposure; Project II: Infectious Disease Transmission; Project III: Dose-Response; Project IV: Risk Assessment and Analysis; and Project V: Knowledge Management and Transfer) have worked together within the Quantitative Microbial Risk Assessment (QMRA) framework, completing and publishing a total of 52 journal articles with 434 citations during the past 6 years (Figure 1 shows the key projects and number of papers and the complete list of publications is included with this report). Nineteen different pathogens have been studied and described in these publications (Figure 2). As one of the most interesting categories of pathogens to EPA and OHS, Category A agents Bacillus anthracis (B. anthracis), Yersinia pestis (Y. pestis) and Fransicella tularensis (F. tularensis), have been studied extensively in more than 10 articles. A number of agents associated with waterborne, airborne and foodborne diseases such as Cryptosporidium, E. coli, norovirus, influenza viruses and Mycobacterium tuberculosis also have received significant attention. 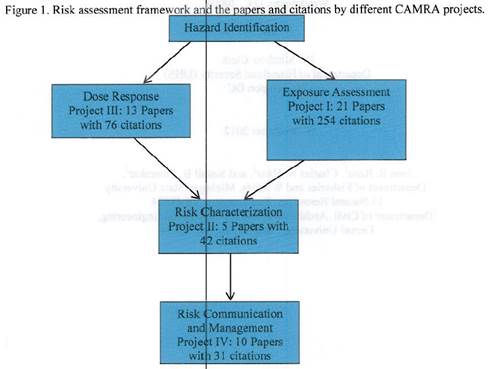 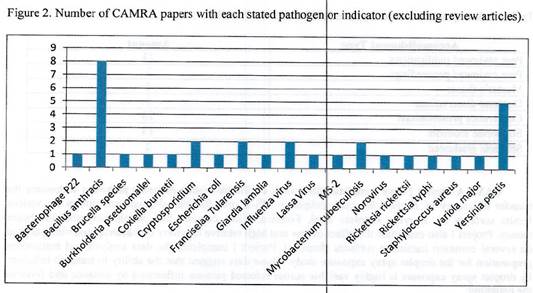 The second mission was to build a national network for microbial risk knowledge management, learning and transfer for the community of scientists and students via educational programs and community of professionals in the field and in our communities.

This has been accomplished through the QMRA summer institutes, and the final few months of the grant will focus on adding to our knowledge system, the QMRA wiki. Appendix B submitted to EPA with the progress report contained some screen shots of some of the key components of the QMRA wiki, including landing pages for Hazard ID; Dose Response; Exposure; Risk Characterization; Risk Management; and finally the QMRA calculator. The link to the QMRA wiki is http://wiki.camra.msu.edu/index.php?title=Quantitative_Microbial_Risk_Assessment_(QMRA)_Wiki. Exit

CAMRA's high productivity after 6 years has now reached an exciting level of maturity in which the frameworks and assessments are being integrated into the research by all PIs and projects. The knowledge gained has been presented to the risk community this past year (2011–2012) through 23 publications and 15 presentations. The next generation of QMRA students has graduated and these individuals are entering the workforce. Dr. Jade Mitchell and Dr. Mark Weir both recently joined Michigan State University and Temple, respectively, as assistant professors.

CAMRA will finalize publications (9 in review, revision or preparation) and models as most of the outputs are in the shape of a paper in preparation or under review.

CAMRA Project I has completed work on fomite-human exposure pathways addressing the transfer efficiency of Escherichia coli, coliphage MS-2, and Bacillus thuringiensis spores on various fomite surfaces, i.e., acrylic, stainless steel, Formica, glass, ceramic tile, cotton, polyester and paper money. Project I also examined the effect of low and high relative humidity on bacterial and viral survival on several common inanimate surfaces (fomites). The data analysis and manuscript preparation for the droplet spray exposure study in Project I are completed. These data suggest that the ability to transmit infection by droplet spray exposure is highly variable across infected persons influenced by distance and force of the coughing.

Literature from published journal articles on the detection methods for influenza, norovirus, and MRSA will be reviewed. Journal articles will be collected using a number of keywords on ISI Web of Science. References will be exported into an EndNote file. A manual screening will be conducted to eliminate any references that are not expected to contain relevant data.

Digital LAMP has been investigated as a method and the environmental detection limits to address various levels of risk have been explored. The survey of environmental detection limit, published in the journal Applied and Environmental Microbiology, Implications of Limits of Detection of Various Methods for Bacillus anthracis in Computing Risks to Human Health, also highlighted the need to develop methods capable of detecting much lower concentrations of threat agents. One of the novel methods/approaches used is called digital PCR (which is akin to carrying out a most probable number analysis but in nanoliter real time PCR chambers). When combined with the method that is known for better limit of detection (isothermal amplification), such an approach has the potential to improve the environmental detection limit by at least 100-fold. The goal of this "digital LAMP" approach is to experimentally test this hypothesis.

Project I team members have used metagenomics approaches to address fomite contamination and hazard discovery for viruses, finding that a wide array of bacteriophage are likely targets for further work to improve exposure assessment. Bacterial samples collected from the fomite surfaces in dormitories at the University of Michigan will be evaluated and characterized by sequencing 16S rRNA genes using 454 FLX sequencing technology. Primers designed to target conserved regions surrounding hyper-variable regions of relevant genes will be used to amplify the 16S rRNA sequences and sequenced by high throughput sequencing. Signature sequences found with 454 Sequencing Technology will be evaluated for the presence of pathogenic and non-pathogenic organisms on the fomites.

For drinking water pathways, Project I showed the usefulness of a risk assessment simulation as a way of evaluating sensor placement and tested the axial dispersion of a sodium chloride tracer passing through a cross junction to evaluate AZRED-II in comparison to both EPANET and AZRED-I and embedded axial dispersion into the AZRED code in order to fully integrate both of the improved transport assumptions for water quality analyses.

Project II has used a deterministic differential equation based model to describe the hand and environmental mediated transmission of Methicillin-resistant Staphylococcus aureus (MRSA). Project II conducted research on modeling influenza transmission on a college campus. Local weather variables were found to be statistically significant in association with the proportion of cases that tested positive for influenza virus and the proportion of diagnosis in outpatients visiting Hong Kong influenza surveillance sites. Project II examined the successes and shortcomings of polio eradication using a transmission modeling analysis.

Project III has added to the impressive dose-response models developing models for Brucella species Leptospira bacteria, Rickettsia rickettsii, Rickettsia typhi and Avian Influenza A (HSNl) Virus. Project III has developed the first inclusion of time post inoculation into dose-response models, which allows for great advancements in understanding how the body reacts to pathogen exposure and paves the way for understanding the effect of multiple dosing of pathogens on the host. Dose Response Models incorporating Aerosol Size Dependency were developed for F. tularensis and B. anthracis. This project also addressed Francisella tularensis associated with ingestion and multiple exposures. Human health risks posed by Aspergillus fumigatus and risk mode for inhaled toxins associated with spores of Stachy are in progress.

Project IV's work on surface concentration standards for non-persistent pathogens has been a collaborative effort with Project III. Project III identified suitable dose-response models and uncertainties for the effort. In addition, a review paper on persistence of Category A pathogens developed by Project I has been a key resource for this study. A joint paper with Project III has been published in PLoS ONE and received favorable reviewer comments. Project IV researchers also performed an analysis of microbial spore recovery. The use of the wipe collection method on non-porous surfaces resulted in the highest recoveries.

Project V has investigated and implemented effective and efficient methods to enhance the understanding of microbial risk assessment (MRA) as a body of knowledge. Project V has built and maintained an online collaborative repository and collaborated with other projects working on an open repository. A major effort has been focused on development of the CAMRA Risk Wiki.

The major accomplishment of the 2011–2012 project year is the QMRA wiki, a collaborative work among all CAMRA projects (http://wiki.camra.msu.edu/index.php?title=Quantitative_Microbial_Risk_Assessment_(QMRA)_Wiki Exit).

Currently, CAMRA wiki contents include an overview of 25 different pathogens and 39 completed dose-response models (bacteria, viruses, protozoa and prion). Exposure assessment, risk characterization and risk management sections have been constructed and content is being added. Dose-Response Calculator persistent models are significant features in wiki. The dose-response models have been compiled in a dose response monograph. The final review has been undertaken and will be available for purchase by the end of the year.

Many organizations are adopting wiki technology to facilitate information management and collaborations. While many studies have tried to identify factors that facilitate or impede wiki adoption, the results have been mixed. Some factors may facilitate wiki adoption in one organization, but are found to impede adoption in another organization. Through a review of existing literature, key communication scientists (Drs. Jonathan Obar and Maria Lainski working with CAMRA) argue that the mixed results may be caused by lumping wikis used for information management purposes with wikis used for collaborative communication purposes. In order to better understand how factors contribute to wiki adoption, it is vital to make the conceptual distinction between long-term information management wikis and short-term collaborative communication wikis for wiki researchers and designers. CAMRA will continue to explore how these concepts can advance QMRA knowledge, use and contributions.