Official websites use .gov
A .gov website belongs to an official government organization in the United States.

Secure .gov websites use HTTPS
A lock () or https:// means you have safely connected to the .gov website. Share sensitive information only on official, secure websites.

For this project, we sought to address knowledge gaps regarding the health effects of particles. Recent epidemiologic studies have indicated associations between ambient particulate matter (PM) air pollution and increased mortality and morbidity. However, in the few studies where components of PM have been considered, it has been suggested that the constituents that comprise the mass vary in their relative potencies. Unfortunately, the particle characterizations available for most past epidemiologic studies have been extremely limited (especially for recent time-series studies showing mortality associations with PM10, the mass of particles with da less than 10µm). Thus, there is presently little epidemiologic basis for evaluating the relative potencies of the various PM mass constituents vis-a-vis human health. Moreover, few studies have evaluated the acute health implications of PM constituents to potentially sensitive subpopulations, such as minorities, the poor, and those with respiratory disease (e.g., asthma). This research seeks to contribute to our knowledge as to who is most affected by particles and which particles are most damaging to human health.

We have utilized several unique PM databases to assess the relative roles of various PM components on human mortality and morbidity. The data include daily PM measurements for the Buffalo, NY, and New York City (NYC), NY, metropolitan areas during the years 1988, 1989, and 1990; and for Philadelphia, PA, during 1992 and 1993. Our data set especially is relevant to these investigations in that it contains years of simultaneously collected daily measurements of multiple PM constituents, including the mass of PM less than 10 micrometers (µm) in aerodynamic diameter (PM10), fine particle mass (PM2.5), sulfates (SO4=), and acidic aerosols (H+). Daily H+, SO4=, PM10, O3, SO2, NO2, CO, CoH, T, and RH were analyzed. In Philadelphia, fine mass (PM2.5) and coarse mass (PM10-2.5) were measured. We also obtained and aggregated contemporaneous daily mortality and hospital admissions records by race, sex, age, and cause for each city, as available, which were then utilized to evaluate the relative roles of these PM constituents in the PM-mortality and morbidity associations noted in recent years.

In this work, time-series analyses were applied to data sets to test the relative strengths of associations between the various PM exposure metrics and the various relevant categories of human mortality/morbidity. Poisson time-series methods (GAM), controlling for potential confounders (e.g., season, day of week, and weather), were used to assess pollution-health effects associations. Dummy variables for federal holidays were included to control for their potential influence on daily mortality counts, and especially on hospital admissions counts. In each city, temperature (T) and relative humidity (RH) were included as a Locally Estimated Smooth Surface (LOESS), thereby parsimoniously addressing the T-RH interaction on hot and humid days as well as the nonlinear nature of temperature effects.

Our specific research goals were to intercompare the relative strengths of associations of various PM mass and composition concentrations with daily mortality and hospital admissions health outcomes; and to evaluate whether any conclusions can be drawn as to the roles of various size and/or composition components of mass. The two specific hypotheses tested in this research were: (1) acidic aerosols represent a PM component that is especially harmful to human health; and (2) certain subpopulations are especially susceptible to adverse health effects from ambient PM exposures. This comprehensive assessment of the various PM components' air pollution associations helps to provide the basis for quantitative assessments as to which of these measured components of PM were most influential in the PM-health associations indicated by past research.

It was possible to compare the health effects associations with the various PM mass size range components for Philadelphia, PA. While all mass components considered yielded relative risk (RR) effect estimates greater than 1.0?consistently indicating that PM is adversely affecting health?the PM10-2.5 mass fraction was not significantly associated with morbidity or mortality health effects in any regression, while the PM2.5 was significant in most. PM10 effect estimates were similar to those for PM2.5, but generally with smaller RRs perµg/m3 and t-statistics. For example, for total (all age) mortality, the 5th to 95th percentile pollutant increment was associated with RR=1.4 for both PM2.5 and PM10, but PM2.5 had a higher t-statistic, suggesting a stronger association for the fine component of the PM10. Conversely, PM10-2.5 had a nonsignificant RR=1.02 for this outcome. A similar pattern was found for circulatory (i.e., cardiovascular) deaths, with significant association for both PM2.5 (RR= 1.10) and PM10 (RR= 1.08), but nonsignificant for PM10-2.5 (RR= 1.02). A similar association pattern was found for respiratory hospital admissions associations for the elderly, with the various PM mass components, but none of the PM mass components was significantly associated with circulatory hospital admissions. In general, it was found that fine mass was more strongly associated with morbidity and mortality than were PM10 or PM10-2.5. 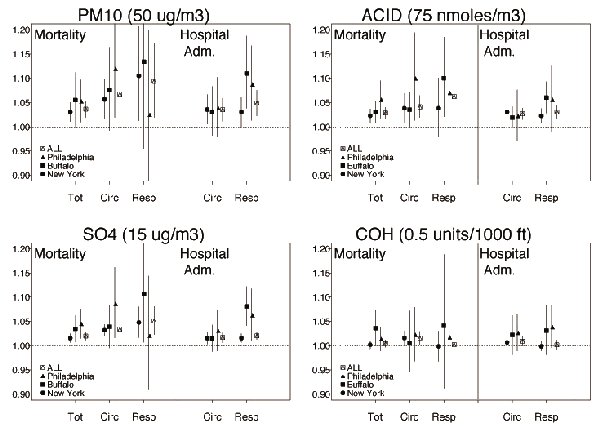 When intercomparing associations across pollutants, it is desirable to consider their respective errors of exposure, as random errors that greatly reduce the correlation between measured and actual exposure (e.g., due to measurement error or poor spatial correlations of a pollutant) will tend to reduce the significance of the pollutant effect and bias pollutant effect regression estimates toward zero (see Carroll, et al., Measurement Error in Nonlinear Models: Monographs on Statistics and Applied Probability. Chapman and Hall, London, 1995, p. 22). Fortunately, it was possible to investigate this factor in Philadelphia, where all pollutants were measured at multiple sites. We computed the site-to-site coefficient of variation (CV) for each pollutant measured in Philadelphia, using data from (or from the site nearest to) the three sites where acid aerosol was measured in Philadelphia during the Harvard study, to have maximum comparability across pollutants. This CV incorporates both the measurement error and the true site-to-site variations in pollutant concentration, giving a metric as to how well the central site measurements of each pollutant are reflecting exposures throughout the metropolitan area, respectively. We found that t-statistics were highest for the pollutants with the highest intersite spatial correlations across Philadelphia (e.g., O3, SO4=, and H+). We also found that the PM mass t-statistics did decrease with increasing measurement error, with PM2.5 having the greatest significance, PM10 a greater error and lower significance, and PM2.5-10 having the greatest site-to-site CV and the lowest significance, suggesting that errors of measurement do play a role in the relative associations of the various mass PM fractions. PM chemical constituent t-statistics, however, were not explained by measurement errors. CoH had one of the lowest site-to-site CVs, but it was only weakly associated, while acid aerosols actually had among the strongest associations, despite having the greatest error of measurement (CV=79%). This suggests that even stronger health effects associations might be found for acid aerosols if population H+ exposures could be measured more accurately.

These results, indicating a greater role by secondary acidic particles than by primary carbonaceous particles, do differ from some previous analyses conducted elsewhere that suggest an important role by diesel particles in affecting human health. Indeed, several epidemiological studies in Europe have found a relationship between proximity to traffic flow and increased risks of childhood hospital admissions, respiratory symptoms, and decreased lung function (see Brunekreef, et al., Epidemiology 1997;8(3):298-303). However, such traffic studies have not yet confirmed that personal exposure to diesel particles is directly associated with the adverse health effects being found to be associated with traffic proximity. Also, it may be that the apparently higher associations by diesel traffic pollution in other cities may be due to higher levels of carbonaceous PM and lower levels of H+ in these other locales/time periods, relative to the northeastern U.S. cities considered here, that have higher impacts from secondary aerosols and a lower percentage of diesel vehicles. Another possible hypothesis is that European diesel fuels, with their higher sulfur contents, result in more toxic PM than lower sulfur U.S. diesel emissions. Further investigation is needed to test and clarify the possible U.S.-European difference in the role of carbonaceous particles in PM associations with human health effects.

Overall, this study's PM component intercomparison results suggest that there is a need for more extensive investigations into the apparently important role of fine particle aerosol acidity in the PM-health effects associations in these northeastern U.S. cities that experience higher H+ than much of the rest of the United States. Indeed, this result is consistent with recent NMAPS study results that indicate a higher PM-mortality effect size in the northeastern United States than in the United States in general (Samet, et al., New England Journal of Medicine 2000;343(24):1742-1749). However, to advance much further than what has been accomplished in this work, any new acidic aerosol investigations likely would benefit from the development of better H+ measurement methods that have lower measurement error than present filter-based methods (e.g., that are not so affected by alkaline particles that also are present in the fine fraction).

Among the extensive literature published in the field of air pollution epidemiology, few studies have focused directly on the potential impacts of air pollution on racial minorities. Disadvantaged nonwhite communities may experience higher than average exposures to air pollution. In the United States, higher percentages of Blacks and Hispanics live in designated air pollution non-attainment areas than do whites. Access to quality health care also may play a key role in the severity of effects among nonwhite populations from air pollution, as disparities in the access to routine preventive care by poorer, nonwhite communities may leave them more susceptible to the adverse effects of air pollution. In addition, there is a higher prevalence of asthma in minorities than in whites, so a higher percentage of minorities are likely to be especially affected by air pollution. In this analysis, we attempted to see if air pollution effects were indeed a function of race in NYC, which was an ideal locale for such investigations because of its large and diverse population.

The objectives of this investigation were to determine if racial minorities are more adversely affected by ambient air pollution than their white counterparts, and to assess the contribution of socioeconomic status to any observed racial differences in pollution effect. Time-series regression methods were conducted to investigate these hypotheses for daily respiratory hospital admissions in NYC. Pollutants considered included mean daily levels of PM10, O3, H+, and SO4=. The RRs for respiratory hospital admissions were calculated for each pollutant for a maximum minus mean increment in daily pollutant concentration, to estimate the effect of a high-pollution day relative to a typical day. The greatest difference found between the white and nonwhite subgroups was observed for O3, where the white RR was 1.032 (95% confidence interval [CI]: 0.977-1.089) and the nonwhite RR was 1.122 (95% CI: 1.074-1.172). Although not statistically different from each other, the various pollutants' RR estimates for the Hispanic nonwhite category in NYC generally were larger in magnitude than those of the non-Hispanic white group. When these analyses incorporated differences in underlying respiratory hospitalization rates across races (that, among nonwhites, were roughly twice that for whites), the disparities in attributable risks from pollution (in terms of excess admissions/day/million persons) were even larger for nonwhites versus whites.

Figure 2. New York City race-specific relative risks (based upon the maximum minus mean pollutant increment) and their 95% CI for respiratory hospital admissions.

When insurance status was used as an indicator of socioeconomic/health coverage status, higher RRs were indicated for the poor/working poor (i.e., those on Medicaid and the uninsured) than for those who were better off economically (i.e., the privately insured), even among the non-Hispanic whites. Thus, the within-race analyses suggested that most of the apparent differences in air pollutant effects found across races were explainable by socioeconomic and/or health care disparities. 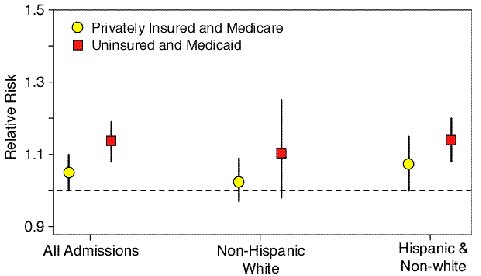 Contact Us to ask a question, provide feedback, or report a problem.