Official websites use .gov
A .gov website belongs to an official government organization in the United States.

Secure .gov websites use HTTPS
A lock () or https:// means you have safely connected to the .gov website. Share sensitive information only on official, secure websites.

Specific Aim 1:  To utilize the EndoChip model to examine how a pre-existing inflammatory disease affects cellular response(s) to an environmental toxicant.

Specific Aim 3: To perform Case Studies to assess the EndoChip as an alternative to vertebrate animal testing to identify reproductive toxicants.

In the first few months of the funding period we identified a defect in the original scaffolds being used for molding the devices. The scaffolds were re-designed and new chips made and tested. We used this event as a platform to train our graduate students in the mechanical aspects required to fabricate the devices.

While the chip scaffolds were being redesigned we conducted studies to characterize the human endometrial tissue and isolated cells needed for seeding the organ-on-a-chip devices. These studies included isolating and characterizing primary, disease-free endometrial stromal cells, stromal cells passaged multiple (5+) times and primary endometrial stromal cells form women with endometriosis. Through these studies, we were able to demonstrate that passaging control stromal cells leads to a loss of P4-responsiveness that mirrors similar cells obtained from women with endometriosis. The passaged cell phenotype is a valuable finding since we can easily establish a bank of passaged endometriosis-like human endometrial cells (frozen) and pair the passaged cells with non-passaged control cells for the EPA project. Cells from endometriosis patients will also be used as available but these cells are more difficult to acquire than our control tissue donors. Using this approach, we now have banked cells that can be used as needed for the EndoChip devices going forward.

Working with our colleagues at MIT we have equally developed the capacity to create a similar bank of human endometrial epithelial cells using 3D organoid technology (primary epithelial cells grown in a matrix that provides the 3-D environment necessary for formation of glands (Figure 1)). Together with the stromal cell preparations noted above, we can utilize frozen stocks of each key somatic cell component for our EndoChip devices. Importantly, culturing epithelial cells as organoids provides a more in vivo-like environment, in addition to allowing these cells to be frozen for each new experiment. The capacity to have both stromal and epithelial cells banked for use ad libitum is a significant advantage and should benefit all goals of the application as well as expanding the use of the OoC EndoChip devices to other groups.

Our previous studies have established experimental human endometriosis in Rag2g(c) (recombinase activating gene 2 double knockout) mice, a severely immunocompromised strain that accepts both human immune cells and tissues without rejection. Experimental endometriosis established in these mice using endometrial tissue from healthy (disease-free) women, revealed that healthy immune cells impeded disease development while immune cells from endometriosis patients promoted disease, strongly suggesting a role for alterations in immune cell function in promoting endometriosis. Thus, in addition to TCDD-associated alterations in endometrial cell behavior, it appears likely that immune cell training may also be negatively affected by prior toxicant exposure. Immune cell over-training is associated with increased pro-inflammatory cytokine expression as well as a metabolic shift that favors glycolysis and the enhanced production of lactate. Our human cell studies demonstrate that immune cells acquired from women with endometriosis exhibit increased expression of IL-1 and IL-6 compared to cells from healthy women, which led our approach to the development of biosensors as noted below. Important to the goal of replacing animal studies, our human cell work duplicated the findings of our TCDD exposed mouse model. Specifically, mice with a TCDD-mediated endometriosis-like phenotype, exhibit a robust production of lactate compared to control animals, supporting the theory that toxicant exposure promotes excessive training of immune cells (Figure 2). 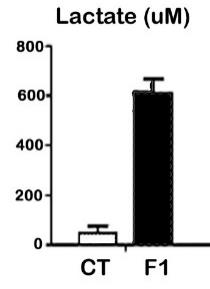 To transition to the EndoChip, studies are underway to assess the metabolic profile of healthy human immune cells before and after exposure to TCDD, utilizing the established biosensors for lactate and glucose as well as sensors for MMP-3 and IL-6 that are in the final stages of development in the laboratory of our co-Investigator, Dr. David Cliffel. Specifically, we are using electrochemical aptamer-based sensors to detect a variety of target molecules including proteins, small molecules, and inorganic ions. These sensors are reagentless, reusable, and highly selective and thus perform well in blood serum and other complex samples. As a result, aptamer-based sensors are a promising approach for the detection of IL-6 and MMP-3. Studies are currently underway to optimize aptamer-based IL-6 and MMP-3 sensors for integration with the EndoChip. In addition to investigating the potential of aptamers in detection of toxicant-regulated proteins, we are also developing several base sensor options that are adaptable for antibody-protein couplings. The base system for both the IL-6 and MMP-3 sensors is an automated microfluidic electrochemical immunoassay using magnetic beads. These approaches will allow us to quantify the expression P4-regulated proteins that are sensitive to disruption by toxicant exposure.
The base system for both the IL-6 and MMP-3 sensors is an automated microfluidic electrochemical immunoassay. Magnetic beads are conjugated to the IL-6 antibodies which will then be temporarily stuck to the electrode surface by a magnet underneath the electrode cell housing. A baseline can first be obtained by an IL-6/Alkaline Phosphatase (AP) conjugate being flown through followed by the chemical p-aminophenyl phosphate. This compound is not electrochemically active, however, the AP will cleave the phosphate and then create the electrochemically active compound p-aminophenol (PAP). The amount of PAP in solution proportional to the amount of IL-6 in solution, as the more IL-6 in solution, the fewer IL-6/AP conjugates that can temporarily bind to the electrode surface, thus turning over less PAP. This association will decrease the amount of electrochemical signal detected with an increasing amount of IL-6.4 This biochemical relationship is essentially quenching and follows the Stern-Volmer equation.5, 6 A proposed figure of the assay is shown below in Figure 3.

Figure 3. A template of the proposed sensor composition.

At this juncture, basic confirmation of the assays function has been performed for both IL-6 and MMP-3. Currently, the p-aminophenyl phosphate (PAPP) and PAP relationship with alkaline phosphatse (AP) are being investigated. As part of our initial optimization studies, a steady calibration curve of the PAP is necessary before other biological components are introduced. Additionally, with PAP being photo-oxidative, the light sensitivity and timeframe is being investigated as well to ensure that this is not affecting the electrochemical measurements. Kinetic studies of the AP enzyme are being searched for in literature to determine the best timescale for flowrates, and experiments will be performed for corroboration. With PAPP and PAP both being UV-Vis active, our goal is to have a corroborating electrochemical and optical calibration curve. Once this has been performed, we can then perform the same experiments with the beads to confirm the magnetic bead calibration works. Once the IL-6 version can detect an unknown properly, further development and use of the MMP-3 sensor will follow the same calibration.

The onset of the Covid pandemic impacted our ability, as with all research laboratories using human material, to obtain fresh human biopsies from patients. As noted in Specific Aim 1 above, we have avoided major disruption by using our control cells for the EndoChips. We also focused effort on experiments in Case Study 2, which was designed to use cell lines since the goal of these studies is to develop a standardized and reproducible EndoChip device that will be amenable for screening purposes. For this set of studies, we have begun to establish EndoChips using passaged endometrial stromal cells (noted above) and THP-1 cells (immune cell line) and 12z cells (endometriosis epithelial cells). These EndoChip cultures are initially treated with TCDD and results compared to the EndoChip studies noted above, using primary cells. We expect that the primary cells will be equally available compared to the cell lines over the next year of studies. At present, only a limited number of EndoChip experiments comparing primary cells versus cell lines have been conducted; thus, further analysis (IM-MS) will be performed once an adequate number of samples have been collected. We have also identified a commercially available device that will be appropriate for laboratories new to the use of organ-on-chip devices. Experiments comparing results with our in-house EndoChips and these commercially available devices are underway.

Describe the major objectives and focus for the subsequent reporting period, including any updates to the project schedule.
The primary goal of Specific Aim 1 during the next funding period is to establish control (EndoChip-C) and endometriosis chips (EndoChip-E) to compare response of pre-existing disease to TCDD. As stated above, EndoChip-C devices will be created using passaged stromal cells from disease-free donors, which mimic the P4-resistant endometriosis phenotype. These cultures will be established in the presence and absence of an inflammatory challenge. The next step will be to introduce immune cells into the cultures. We will measure established biomarkers of P4-mediated stromal-epithelial communication as well MMP3. Together these studies will allow us to further validate the EndoChip as a screening tool for identifying disease-toxicant interactions.
With regard to Specific Aim 2 and 3, in the next funding period, we anticipate that the biosensors being developed in the Cliffel lab will be fully online and in use. We also anticipate performing IM-MS on conditioned media from a variety of EndoChips (primary vs cell lines) and with and without toxicant exposure.

Department of Obstetrics and Gynecology Exit

Contact Us to ask a question, provide feedback, or report a problem.