Chorioamnionitis (CAM), or intrauterine infection during pregnancy, is a leading cause of preterm birth (PTB), triggering fetal membrane inflammation that drives labor processes. Subsets of women with microbial contamination of the amniotic cavity carry their pregnancy to term, however, suggesting host factors likely influence risk for CAM associated PTB. Using a mouse model, we identified a doubling in the occurrence of spontaneous PTB when an infective agent represented a “second hit” following a previous exposure to an environmental toxicant (2,3,7,8-tetrachlorodibenzo-p-dioxin or TCDD). This two-hit hypothesis is supported by our in vitro models using isolated human endometrial cells, which following TCDD exposure, exhibit an enhanced response to an inflammatory challenge related to infection (i.e., LPS, IL-1 or TNF-α). These data suggest the novel hypothesis that environmental toxicants prime the gravid uterus for exaggerated inflammatory responses to microbial invasion. More than 80,000 chemicals have been released into our environment since the Toxic Substances Control Act of 1976; however, only a limited number of these agents have undergone controlled experimental examination. To meet this challenge, we have developed novel platforms for the establishment and analysis of organ-on-chip systems that are amenable to medium to high throughput screening.

The Objectives of Project 3 are to use this unique Vanderbilt expertise to develop and validate an instrumented fetal membrane on a chip (IFMOC) system in order to specifically identify toxicants that negatively impact the maintenance of pregnancy.

In this first year we have focused on studies outlined in Specific Aim 1, “to define the temporal and concentration-dependent effects of TCDD on native fetal membrane immune responses to infection." Initial studies within this aim used previously designed fetal membrane (FM) punch biopsies and FM transwell models to identify concentrations of lipopolysaccharides (LPS) in combination with TCDD on inflammatory biomarkers. These studies demonstrated that while TCDD alone has minimal influence on TNF-α, IL-1β or IL-10 gene expression in FM punches, TCDD plus LPS was shown to elicit a dose-dependent increase in inflammatory gene expression after 4 hours of exposure. We confirmed that TCDD priming of gestational membrane tissue led to an exaggerated response to LPS as well as a decrease in progesterone receptor (PR) expression. We have additionally compared LPS from two different resources (from E. coli, Serotype O55:B5 from E. coli K12): both LPS serotypes can stimulate the release of TNF-α from human gestational membrane punches into culture media in a dose-dependent manner with a broad range. For all remaining studies we will use only the LPS from E. coli O55:B5 as our reagent.

We also have made significant progress in our studies proposed in Specific Aims 2 and 3. To this end, as proposed, we implemented an in vitro, microscaled, living, instrumented device that recapitulates the physiological properties of human endometrial tissue and began evaluation of endometrial and placental cells within the device. During Year 1, we completed the fabrication of a double chamber device and optimized the protocol for 4 week microfluidic co-culture of cell lines using gravity fed perfusion. Collaboration for visually transparent, permeable membranes with Prof. Elliot Hui at the University of California-Irvine also has been established. We have shown that human endometrial stromal cells, co-cultured with epithelial cells and/or endothelial cells, can be successfully differentiated in the device after 14 days of progesterone treatment. In separate studies, we found that a Matrigel coating improves both endometrial and amnion epithelial cell adhesion to the fetal membrane. Proliferation of the different cell types and induced stromal decidualization were tracked by selective fluorescent cellular staining. In order to develop a medium throughput screening tool, we have evaluated the use of primary cells from human tissues as well as the use of human cell lines. These studies are designed to determine the feasibility of combining primary stromal cells with easily available placental cell lines. Specifically, these studies will compare the microenvironment of early pregnancy to that of late pregnancy. Based on our previous work and on recent results, we expect that toxicant exposure during early pregnancy will lead to impaired decidualization and altered placentation, which will negatively impact maintenance of pregnancy. 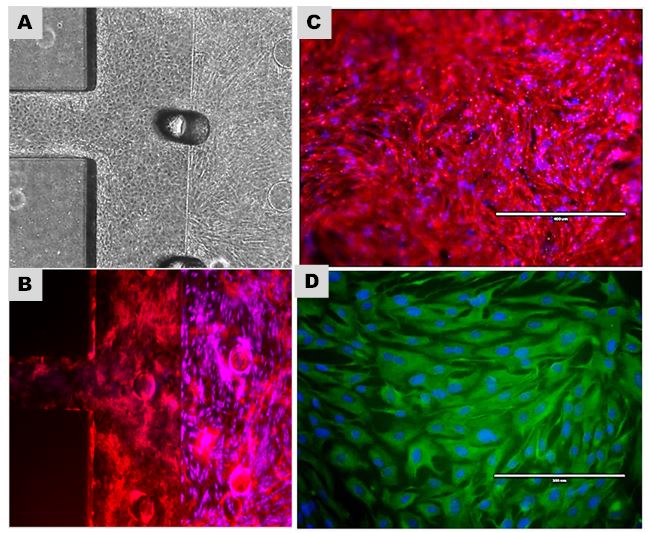 Figure 1. Co-culture of stromal cells and epithelial cells at DIV 10 inside the two chamber IFMOC microfluidic device. A,B) The two chambers separate the cell types perfectly: the vertical line represents the edge of the upper chamber where stromal cells are cultured (purple). C,D) The single chamber can be visualized and by selective staining each cell type can be identified inside the device (epithelial cells stained for actin in red and stromal cells stained for vimentin in green). Scale bar 200 mm.

Following the completion of our latest analyses, we will select inflammatory biomarkers that are significantly influenced by TCDD exposure. The selected biomarkers will subsequently be examined within the transwell following treatment with TCDD as well as other compounds as outlined within our project in order to validate the biomarker profile prior to use within the IFMOC. For example, we anticipate that IL-1α, IL- 1β, TNF-α, IL-6, and IL-8 will be the most useful biomarkers for screening. In this manner, we will be able to evaluate biological/functional changes caused by toxicant in the presence and absence of an inflammatory challenge (i.e., LPS). Next, we will examine cell death using both Terminal deoxynucleotidyl transferase (TdT) dUTP Nick-End Labeling (TUNEL) assay and Caspase-3 staining for apoptotic cells.

No journal articles submitted with this report: View all 21 publications for this subproject