The Integrated Science Assessment (ISA) for Oxides of Nitrogen – Health Criteria document represents a concise synthesis and evaluation of the most policy-relevant science and will ultimately provide the scientific bases for EPA’s decision regarding whether the current standard for NO2 sufficiently protects public health.

Oxides of nitrogen is one of six principal (or criteria) pollutants for which EPA has established national ambient air quality standards (NAAQS). The Clean Air Act requires EPA to periodically review the scientific basis for these standards by preparing an Integrated Science Assessment (ISA), formerly called an Air Quality Criteria Document (AQCD). The ISA was prepared as part of the review of the primary or human health-based NAAQS for oxides of nitrogen.

The Final NO2 ISA evaluates and integrates the newly available health evidence, and contains the key information and judgments formerly found in the AQCD. A series of Annexes to the draft ISA provides more extensive and detailed summaries of the most pertinent scientific literature.

This is EPA’s latest evaluation of the scientific literature on the potential adverse health effects resulting from exposures to oxides of nitrogen, particularly nitrogen dioxide or NO2. There are significant new data, particularly epidemiological studies, that strengthen the evidence for these effects since the last scientific review document was released in 1993. 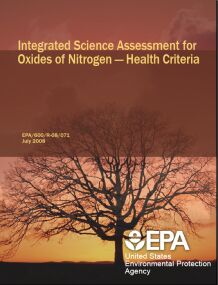