Since its invention in the 19th century, ordinary portland cement (OPC) and its products (i.e., poured concrete, blocks, pavers) have served mankind well. Pound for pound, the only substance used more today is water. In the 21st century, however, OPC faces many challenges. The world is seeking a solution to the negative environmental effects stemming from the production of greenhouse gases (GHG), and OPC is responsible for ~ 5 % of global production of GHGs. At the same time, other challenges also are growing, including the storage or re-use of industrial waste, lack of options for appropriate, sustainable, and affordable building materials in many developing nations, and problems associated with aging concrete infrastructure.

A single emerging technology could be a partial solution to all of these problems: alkaliactivated cement (AAC). Made primarily from ubiquitous industrial by-products (waste), AAC is competitive with OPC in cost and performance, but with significantly lower CO2 production, lower cost, improved durability and longevity, and high recycled content.

Today, a variety of AAC systems are being investigated under several names such as Geopolymers, Hydroceramics, Soil Cements, or just AACs, though OPC still commands a 95% market share. Several review articles and a comprehensive book on the state-of-the-art enumerate, for several varieties of AAC, potential advantages over OPC including: (i) drastically less CO2 production; (ii) longer life and better durability; (iii) better defense against chemical attacks (i.e., chloride, sulfate); (iv) rapid strength gain; (v) better performance in marine environments and; (v) repurposing of industrial waste. While understanding is growing and a company in Australia is selling AAC concrete commercially, AACs still have several challenges to overcome, including, (i) rapid setting; (ii) leaching and salt efflorescence formation; (iii) variation in raw materials, and; (iv) the need for curing between 50 and 100°C. The advantages, and challenges, for AACs vary by type (magnesia, slag, geopolymer, sulfoaluminate, etc.), but the preceding list is fairly typical of AACs.

The core objective of this project is to map mix design and cement component properties (i.e., chemistry, particle size) to bulk performance, in direct response to a call throughout the scientific community for an improved body of knowledge on the relationships between mix design, bulk performance, microstructure, and chemistry. Applied science has been used to guide the development of viable alternative cements. Long term, this would enable the use of many slags and fly ashes as alkali-activated cements by providing the critical link between component chemistry and the proper mix design using those components to achieve the desired bulk performance. In other words, if given a handful of slag or fly ash, we could quickly determine if it is suitable for use as an AAC, and the types and amounts of activator to use. This also is important in overcoming a major stumbling block in the field: variation in cementitious by-product streams. Eventually, this also could aid in a paradigm shift from slags and fly ashes being by-products to co-products, further promoting the recycling and reuse of billions of tons of “waste” into essential building materials. Much of the present development in the field of concrete and other cement products focuses on the modification of mortar, concrete, and other mixtures using OPC. Herein, the cement itself, the core binder that makes all cement products possible, would be the focus, opening the doors to revolutionary rather than evolutionary development. This project also seeks to improve the lives of the poor by making high-quality building materials more available and affordable.

The introduction of alternative cements would create job opportunities and be unlikely to impact established cement producers who could adapt to the emerging technology. AACs would be designed to function as a direct replacement for OPC, so production of, and construction with AACs would be performed using existing methods, minimizing the need for additional training or equipment.

Progress was made in the development and understanding of a fine limestone aggregate concrete comprising ground granulated blast furnace slag (GGBFS), activated by soda ash (sodium carbonate), with a fine limestone aggregate. This system was chosen for several reasons, including literature support for the success of using ubiquitous and accessible slag and the fact that of common activators, Na2CO3 is one of the most inexpensive, available, and environmentally benign. In Phase I, Mixture Design of Experiment (DOE) was utilized for both mechanical and chemical analysis. This allows, among other things, a better understanding of mixture component interactions, and the ability for optimization. Mechanical analyses include compressive strength, Young’s moduli, and hydraulic properties. Chemical analyses include quantitative crystalline phases by x-ray diffraction (XRD) with Rietveld, unreacted slag by backscatter scanning electron microscopy (SEM), and overall structure by nuclear magnetic resonance (NMR). Models were derived for use in understanding the impact of mix design on performance and for optimization. Successful formulations are hydraulic, cure at room temperature, have strengths as high as 40 MPa at 3 days and 64 MPa at 28 days, and costs as low as ~$33 (USD)/ton for raw materials.

Clear correlations were observed between mix design and performance. For example, an excess of Na2CO3 was shown to lead to leaching and thus to significant strength loss. Multidimensional models were derived for each response and utilized for understanding component interactions and for optimization and simulated testing. Major chemical products include gaylussite and calcium silicate hydrate (C-S-H), with the former being most important to strength at 3 days, and the latter at 28 days. Fine limestone aggregate is consumed to become part of the C-S-H, and a continuum of products depending on the amount of soda ash used is observed, as shown in the example figure below. 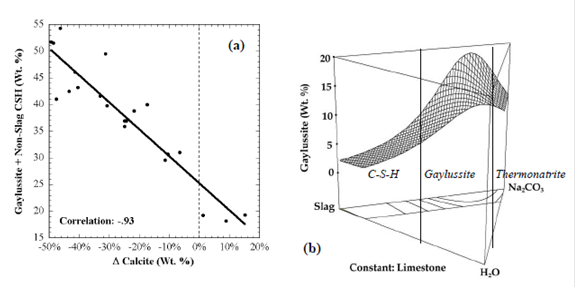 Figure 1. Consumption of calcite vs. creation of gaylussite + non-slag C-S-H, and Na2CO3 continuum a) All values are in wt. percent. Calcium from the calcite in the limestone fine-aggregate is incorporated into gaylussite, Na2Ca(CO3)2 b) Response surface model (RSM) for gaylussite, plotted w.r.t mix components. Peak occurs near the stoichiometric ratio of Na2CO3 + CaCO3 = Na2Ca(CO3)2.

It also is important in nearly all applications that hardened material be volumetrically stable. For this reason, both the autogenous and drying shrinkage were measured for several related AAC formulae. In most cases, the AACs shrunk more than OPC; shrinkage-reducing admixtures were found to be marginally effective. Tests conducted by ASTM C1038, submerged mortar bar expansion, showed little volumetric change though, so shrinkage in the first 24 hours after casting must be dominant.

While the focus of development in this project is the cement itself, it is valuable to conduct tests on larger-scale applications of the cement used in concrete. To this end, three-point bending tests were conducted as a proof of concept and to compare performance to typical OPC-based concrete. The AAC concrete exhibited stiffness similar to OPC-based concretes.

Phase I of the project was successful in leveraging collaboration amongst universities, including pre-college, undergraduate and graduate students, and industry partners to understand and publish the relationships between mix design, chemical properties, and physical performance in AACs. Formulae were developed that nearly pass ASTM C1157, and tests conducted to characterize autogenous and drying shrinkage and the load-deflection response of a large-scale concrete beam under three-point loading. The team members represent Materials Science and Engineering, Mechanical Engineering & Mechanics, and Civil Engineering. Tools, techniques, experience and perspectives from all three were leveraged, including respectively, characterization and chemistry, systems design, and cement/concrete expertise. This project has the potential to significantly reduce global CO2 production, reduce the need for mining, and for creating a cycle to reuse and recycle industrial waste. Cement is used to a great extent in both developed and developing countries, thus intentional efforts were made to consider both developed and developing markets. Because the raw materials used are ubiquitous, and the approach, in principle, flexible to accommodate varying local conditions, the potential impacts are broadly applicable and transferable around the world. Five external partners were involved in the project, comprising a university, non-governmental organization, material supplier, commercial producer, and a technology incubator. The production of cement developed through this project would produce approximately 50 kg of CO2 per ton as opposed to 900+ kg per ton for OPC, a ~95% reduction. If all global slag and fly ash supplies were utilized for AACs as an OPC alternative, global CO2 production would be reduced by 5%, or ~1.5 billion tons annually.

The most direct impact on people is embodied in the objective to improve the lives of slum dwellers by making high-quality building materials more available and affordable. People also would benefit from the environmental benefits of alternative cement. The introduction of alternative cements would create job opportunities, and be unlikely to impact established cement producers. Production of and construction with AACs would be performed using existing methods, minimizing the need for additional training or equipment. This project seeks to develop and implement alternative cements that have drastically lower GHG emissions and require little virgin raw material. This has important implications for climate change and land preservation, especially considering the rapidly rising global demand for building materials

As a direct result of Phase I funding, two refereed papers have been submitted for publications and three presentations, in international conferences, were presented. More importantly, a small business, Greenstone Technologies, Inc., has been founded to bring these and related materials to market. In addition to carrying out the science and engineering needed to render our concrete marketable, Phase II funding would, with a high degree of certainty, lead to a viable commercial product and thus a viable commercial entity.