Polylactides (PLA) are a family of environmentally benign bioplastics based on renewable resources. The environmental advantages are numerous and include: 1) production of the monomer from a renewable resource (biomass), 2) sequestration of vast quantities of the greenhouse gas carbon dioxide 3) energy savings and accompanying pollution prevention 4) reduction of municipal landfill volumes. PLA polymers have a unique combination of favorable economic, energy, and environmental benefits.

The overall objective of the proposed effort is to improve the properties of PLA so that these environmentally benign polymers may be more widely used. Important technical obstacles are hindering the acceptance of polylactides for use in some applications. For example, the heat distortion temperature of PLA is low, PLA is too brittle for some applications, the rheological (flow) properties of the material are not suited for important applications like paper coating, and the permeation properties of PLA are too high for certain packaging applications. This research project pursues multiple approaches for modifying the properties of PLA, including the preparation of micro and nanocomposites, the control of polymer architecture, and the synthesis of core-shell micro- and nanoparticles.

The introduction of branching to the PLA backbone is one highly effective approach to tailor the physical properties. As a new method towards introducing branching, controlled branched architectures and linear chain end functionalized samples of PLA have been prepared by the copolymeriztion of lactide and functionalized epoxides. We have been able to produce materials with an average of between 3 and 5 branches that exhibit decreased intrinsic viscosity values relative to linear polymers of similar molecular weight. 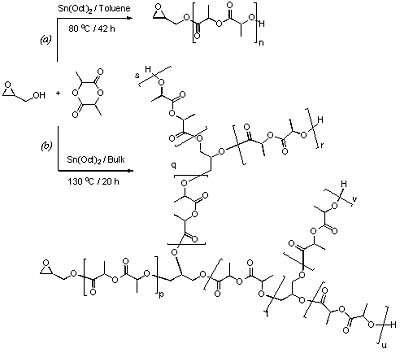 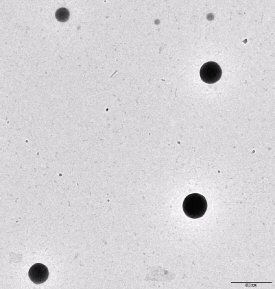 The PLA particles with cross-linked PU cores were synthesized by step-growth reactions of hydroxy-terminated PLA reaction with multifunctional alcohol and isocyanate monomers, utilizing an in-situ procedure. Particles were produced with varying concentration of core to shell, focusing on approximately 70-80% PLA for the majority of syntheses. The particle size range was relatively broad, but was shown to be a factor of total solid and core monomers concentrations. The broad size distribution is not unexpected in the in-situ self-assembly and cross-linking polymerization. However, with the overall simplicity of the synthetic procedure and the formation, self-assembly and cross-linking of the amphiphilic block copolymers in-situ, the initial results of the procedure show promise as some degree of control was still observed. The resulting particles showed good stability in the dry and solubilized states and were readily re-dispersed into good solvents for the PLA shell. Particles were also shown to have dimensional stability when heated at 130°C for 30 minutes, indicating their robust nature. This technique can also be readily used for a wide variety of core and shell polymeric materials as it is not limited to PLA and PU alone, allowing for a wide variety of potential products and uses. The particles can ultimately be dispersed into bulk PLA for impact resistance improvement and flow modification.

One significant drawback of PLA is its relatively low heat distortion temperature, which precludes its use in many applications. The incorporation of nanoparticles was shown to be successful in enhancing mechanical and thermo-physical properties of polymeric materials in previous studies. In order to preserve the environmentally friendly character of the composite, a filler based on renewable resources is desired.

Cellulosic nanowhiskers (CNW) can be obtained from various cellulose sources via carefully conducted acid hydrolysis, in which amorphous regions of the cellulose are broken down to sugars. Most commonly, cellulose crystallites are isolated in this fashion using sulfuric acid. However, the resulting nanowhiskers suffer from inferior thermal stability caused by sulfate ester groups introduced on the surface during the process. Alternatively, hydrochloric acid hydrolysis can be employed for the isolation of CNW; the resulting nanoparticles however are hydrophilic and dispersion the hydrophobic polymeric matrix remains challenging. Taking advantage of the lactide polymerization chemistry, which requires a hydroxyl group to initiate the reaction, it was attempted in this study to grow the polymer chains directly from the CNW surface, thereby improving compatibility and dispersion. Initial experiments using CNW obtained from hydrochloric acid hydrolysis resulted in materials with properties precluding mechanical testing. It was concluded that the large number of initiating groups on the CNW surface led to a significant decrease in the molecular weight of the polymeric chains. 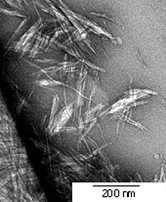 In order to obtain sufficient chain lengths by limiting the number of initiating hydroxyl groups, a fraction of the surface hydroxyl groups was acetylated using a one-step process. The hydrolysis of amorphous cellulose regions was carried out in a mixed acid system comprised of 90 wt% acetic acid and a small amount of hydrochloric acid. Acetylation of hydroxyl groups via Fischer esterification occurs simultaneously with the hydrolysis of amorphous cellulose chains. The dimensions of the resulting CNW are similar to established acid systems based on transmission electron microscopy (see Figure 1) and multi-angle laser-light scattering. The presence of acetate groups, which was verified by Fourier-transform infrared-spectroscopy, allows the re-dispersion of the nanowhiskers in some organic solvents after freeze-drying by sonication (see Figure 3).

Composite materials were prepared by lactide polymerization in the presence of acetylated CNW in toluene and without a solvent present. At a loading level of 10 wt%, the heat distortion temperature reaches values above 100 °C for materials prepared by both methods (Figure 4). At higher CNW levels, composites made in solution outperform bulk-polymerized materials. This is likely to be caused by better dispersion resulting from greater individualization of CNW in the solution process. Both strategies bulk and solution polymerization allow the creation of materials with sufficient mechanical properties for even hot-food applications that are completely based on renewable resources. 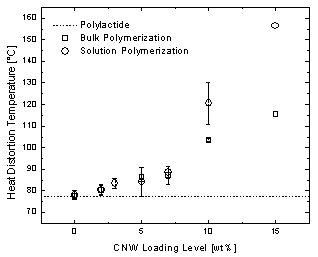 As part of the composite work, a new Fourier transform infrared (FTIR) spectroscopy method for measuring lactide concentration in a polylactide (PLA) matrix was developed. The lactide ring breathing mode peak at 935 cm-1 is rationed against the asymmetric bending mode of methyl groups at 1454 cm-1; because the methyl group is present both in lactide monomer and the polymer this ratio provides a direct measure of lactide concentration. The advantages of using FTIR for conversion analysis are numerous and include high sensitivity as well as low cost. In addition, instrumentation is readily available allowing on-line measurements during film processing as well as in-situ monitoring of polymerization reactions. The new technique thus enables rapid measurements without the necessity of materials sampling and is therefore ideally suited for on-line process control of industrial processes.

The structures formed in this investigation illustrate novel approaches to forming polymers with unique and promising physical properties. The approaches provide materials and techniques that may ultimately aid in advancing the applications of biodegradable, biocompatible, and renewable PLA.

The research has successfully resulted in the development of new PLA architectures, including branched and hyperbranched, core-shell micro- and nanoparticles, and microcomposite structures with cellulosics. Detailed results can be found in the publications listed below. The materials are continuing to be evaluated for the effects on PLA properties. The branched PLA has potential in melt flow modification, the particles for impact modification, and the microcomposites for improved heat distortion temperatures and structural materials. The funding has provided primary financial support and training for three graduate students - Dr. Birgit Braun (Ph.D. December 2007), Mr. Louis Pitet (M.S. August 2006), and Mr. Kevin McNamee (M.S. December 2007).


Journal Articles on this Report : 10 Displayed | Download in RIS Format