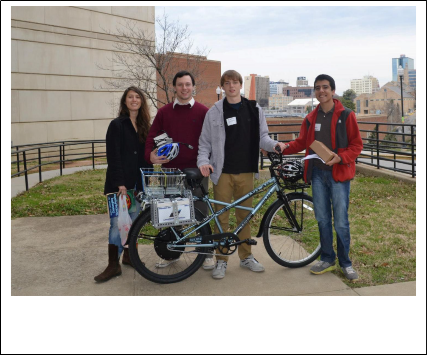 Can an innovative, team-based, hands-on design and construction project involving high school students change their attitudes and personal preferences for transportation to favour lower impact modes? This was the main question PSTAT (Promoting Sustainable Transportation Among Teens) was designed to answer. Since the last decade, global climate change has fuelled increased development of alternative transportation modes that have lesser impact on the environment in terms of greenhouse gas (GHG) emissions. However, society is not embracing the change with open arms; sales of alternative fuel and electric vehicles are a small fraction of the total vehicle fleet. Therefore, there is a critical need for a paradigm shift, which could be especially timely for teen- aged students starting to adopt their own personal transportation preferences. By exposing high school students to a hands-on activity that introduced them to alternative transportation, it was hoped to provide a partially social solution to what is currently viewed as a primarily technical problem – the overwhelming dependence of the United States’ personal transportation system on petroleum. PSTAT involved three teams of high school students in Knoxville, TN (see Figure 1 for the team from West High School), where each had University of Tennessee, Knoxville (UTK) undergraduate engineering students as mentors. The student teams were to design and construct an electrically assisted bicycle, commonly known as an e-bike, that fulfilled the criteria set for a competition of the e-bikes’ performance at the end of the project on UTK campus. A sustainability analysis detailing the environmental, human health and economic impacts of three different commuting scenarios was conducted by each high school as well. The sustainability analysis quantitatively displayed the impacts of various commuting choices, emphasizing the impacts of the current transportation situation in the United States and more importantly the benefits of lower impact transportation modes. Pre-and post- project surveys were conducted to measure the change in students’ perception and likelihood of adopting lower impact transportation modes in the future. 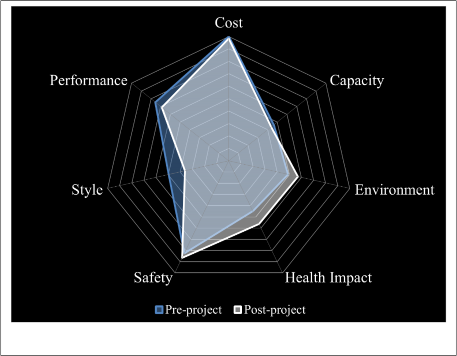 The results of this project are primarily measured by differences in surveys given to students before and after PSTAT. Figures 2 and 3 present the data from two of the questions showing the difference in opinions of the students’ pre- and post-project. The question regarding Figure 2 asked students to rank attributes according to their priorities when choosing a mode of transportation and that of Figure 3 asked the students to rank the likely mode of transportation they will use to commute in the future. Points near the edge of the radar plot represent attributes/modes that are more significant to the individual. In Figure 2, the attributes of performance and style became less important while the attributes of environmental and human health impacts became more important after the project. Similarly, Figure 3 illustrates that the personal preference of the students shifted to favour bikes and battery electric vehicles (BEVs) after the project, when compared to their preferences before the project. 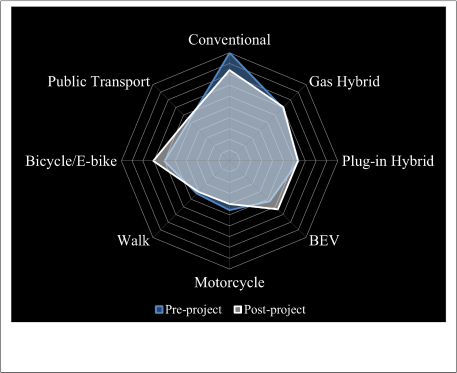 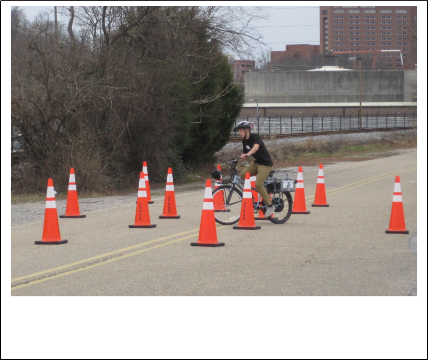 Promoting Sustainable Transportation Among Teens (PSTAT) has shown that such a project does result in a measurable change in the students’ stated preferences and attitudes. This program influenced students to revaluate their transportation choices by simply exposing them to knowledge of lower impact modes of transportation and the results show that this project has been successful. As a pilot program, several areas for improvement were identified, but overall, the program was judged to be highly beneficial, as judged by qualitative comments from the students’ high school teachers, their parents, and the students themselves.