There is growing concern about the particulate pollution emitted by outdoor wood-fired boilers (OWBs) and their related health effects. These systems also are referred to as outdoor wood-fired hydronic heaters or outdoor wood-fired furnaces. A typical OWB and the emitted smoke are shown in Figure 1. Although OWBs can be extremely cost efficient, they pollute the air with high amounts of fine particulates, carbon monoxide, nitrogen and sulfur oxides, volatile organic compounds (VOCs), polycyclic aromatic hydrocarbon (PAHs) and chlorinated dioxins. This is due to poor burning efficiency and incomplete burning of fuel. As energy prices have risen, so has the desire to burn cheaper renewable fuels such as wood. The latest estimates are that there were 500,000 OWBs installed in the United States in 2010. 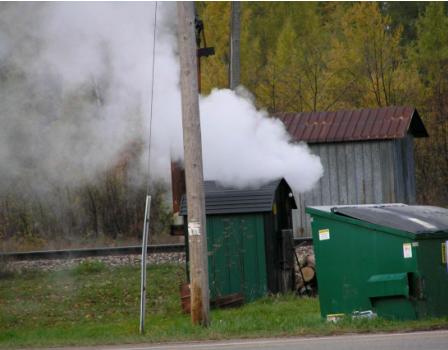 Figure 1. Smoke emissions from a typical outdoor wood-fired boiler.
Considerable testing was conducted in the Phase I program, using a Central Boiler Model Classic 5036. An external retrofit unit containing a catalytic combustor was fabricated and tested through numerous modifications. Visual smoke appearance was used as the metric for reducing emissions. As the retrofit design improved over time, the visual smoke was greatly reduced. The baseline value (without catalyst) for particulates was 0.49 pounds of particulate per million BTU input (wood burned). Particulate emissions were reduced by 47 percent with the standard palladium catalyst used in woodstoves and fireplaces (0.26 lb/million BTU) and 57 percent with a new nano-platinum catalyst (0.21 lb/ million BTU). Carbon monoxide was reduced by 64 percent with the palladium catalyst. A similar reduction in VOCs would be expected.
The objective of the Phase II program was to develop a retrofit catalytic combustor system for OWBs. The Phase II program, on EPA’s request, investigated the combustors using a much more sophisticated test protocol based on EPA Method 28 OWHH. The research involved a number of combustor configurations, both passive and actively heated, with and without additional air, and internal and external positioning on the OWB. A configuration involving a single large combustor positioned in the stack proved most suitable.

Figure 2 shows the emissions results from all tests that were performed in a comparable manner. Averages for similar data sets are shown as dark squares in Figure 2. 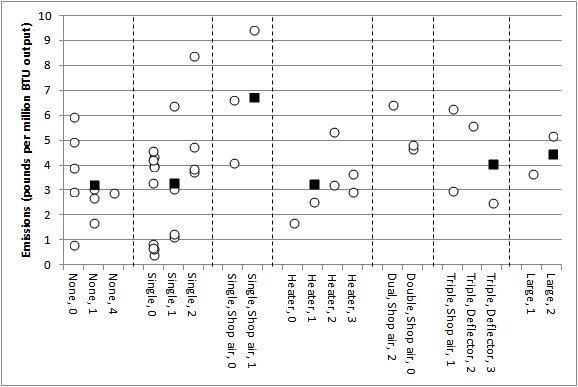 Figure 2. Test results for various configurations. Averages shown as dark squares.
Even though great effort was expended to ensure the accuracy of the data, the results are not repeatable. Analytical causes were ruled out after repeated checks of the data. The lack of repeatability most likely was caused by variations in the operations of the OWB, for example in the properties of the wood and how it was arranged in the firebox.
Visible observation of the smoke showed that the combustor reduced emissions, even if the reduction was not supported by particulate measurement. Figure 3 shows pictures of smoke emission before and after catalyst light-off. While the effect of the catalytic combustion on the visual emissions was obvious, the measured particulate emissions according to Method 28 did not meet the desired level of particulate reductions. The statistical uncertainty, based on the high variability of particulate catch for both uncatalyzed and catalyzed burns, was too large to allow final conclusions. 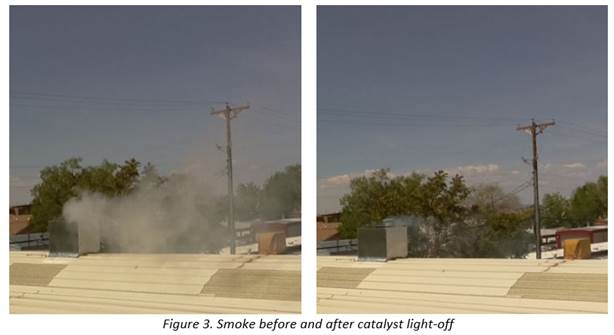 The discrepancy in visual and captured emissions might be due to chemical changes in the composition of the smoke. If the highly obscurant particle emissions are transformed into a volatile but condensable form, Method 28 particle catch would not show an effect.
The commercial potential for the retrofit is limited without meeting an EPA-certified particle emission target. Although it is possible to optimize the combustor system for individual OWBs, it is unclear at the moment whether that approach will be commercially viable due to the large number of different boilers deployed. There also is reluctance from the manufacturers to support retrofits, as newer boilers that meet emission standards are available and promise higher margins.

The Phase I program demonstrated the potential for catalytic retrofit systems to reduce pollution from OWBs. Both particulate matter and carbon monoxide (CO) were substantially reduced. Particulates were reduced 47–57 percent and CO by 64 percent. That retrofit system was externally mounted in the exhaust duct and used a Venturi to provide additional combustion air. Being externally mounted, the catalyst required a heater to maintain firing temperature. Many operators viewed the extra energy required by the heater to be unacceptable as an addition to their existing boiler.
The Phase II program explored placing the catalytic unit in or nearer to the firebox to eliminate the need for an additional heater. A Central Boiler Model 4436 was mounted on load cells to measure the wood-burning rate. As requested by EPA personnel, EPA Test Method 28 OWHH for Measurement of Particulate Emissions and Heating Efficiency of Outdoor Wood-Fired Hydronic Heating Appliances was used as the basis for the procedures and methods used for the program. The EPA Test Method references ASTM standard E2515-09 for the actual particulate measurement. Considerable effort was spent on computer-controlled testing and data acquisition to eliminate operator and data sampling errors.
Two deviations from Method 28 were used in the Phase II program. Method 28 calls for two particulate sample trains. Because of cost reasons, only one train was used. Method 28 also calls for red or white oak 4 x 4 inch lumber to be used as fuel in a uniform stack. That type of lumber is not available in New Mexico. Instead, oak firewood was used, which is in agreement with European Standard EN 303-5 and actual user practice.
Multiple catalytic combustor configurations were tested, both internally mounted and externally, near the firewall duct outlet. In all cases, observations showed a decrease in visible smoke. Particulate catch, however, showed high scatter and no significant reduction due to the catalyst. Method 28 calls for drying the particulate filters in a dessicator for 24 hours. In the Phase I program, Adherent Technologies, Inc., dried the filters in an oven, removing any volatiles. The company dried the Phase II filters after dessication and found that the filters lost an additional 25 percent in condensable volatiles in runs with the catalyst.
Method 28 also requires operating the OWB at its rated heat output, which is 250,000 BTU per hour for the 4436. At that output, 100 pounds of wood had to be burned in 2 hours or less. Again, this is not how a user would operate the OWB. At these burn rates, it appeared that a reasonably sized catalyst is overwhelmed by the volume of smoke.
The Phase II program could not definitively answer all questions left open by the Phase I program. The change in analytical methodology made it impossible to show a statistically significant effect of the catalyst system on particulate emissions even in cases when the amount of visible smoke was greatly reduced by the catalyst. A simple high-surface catalyst system to be retrofitted as part of the exhaust stack seems to be the way forward to reduce at least the visible emissions from existing boilers even if EPA particulate certification cannot be achieved at this point. Improved systems using heaters, blower and computer control of burn cycles can be used to achieve compliance but are probably too expensive for the development and manufacture of the large number of different models to be retrofitted.