New pollution control technologies are needed for small oil- and coal-fired industrial boilers located throughout the United States. Although each unit is relatively small, the vast quantity of these units creates a significant air pollution source, especially in heavily populated locations, that emits particulate matter (PM) and other air pollutants.
These small boilers are used in the paper products, chemical, food and petroleum industries, among others. These small sources (between 10 and 100 million BTU/hr boilers) need retrofitting with inexpensive air pollution control devices. PM is the primary pollutant under consideration for this Phase I SBIR effort, although improvements in volatile organic compounds and carbon monoxide (CO) emissions also are expected.
The technical approach taken is to apply Adherent Technologies Inc.'s (ATI) previously developed catalytic combustor technology to reduce small boiler emissions. That prior work, for wood-burning appliances, has led to EPA certification for use in wood stoves, fireplace inserts that meet EPA Phase II guidelines, and retrofit kits for outdoor wood boilers that are being developed.

The work plan for this Phase I SBIR was divided into three main topics. The first was to collect the necessary data to develop the retrofit system. Where feasible, theoretical and literature data were augmented with ATI's own observations. Second, ATI designed and selected suitable components for its retrofit system, including the housing and the catalytic combustor. Appropriate test methods were established to compare the suitability of these components. Finally, testing a prototype system under regular operating conditions at ATI's development laboratory acted as a proof-of-concept.
Initial testing was conducted on an oil-fired boiler. ATI purchased a Pensotti Quatech Series DK2-8 F10 oil-fired unit from HighTech Heat located in Maine. This particular unit is a cast iron triple pass system with a 4-ft firebox. This is one of the most efficient units they sell, rated at 88.6% AFUE.
ATI also purchased a PCA®3 portable combustion analyzer manufactured by Bacharach. This unit is capable of numerous measurements with various accuracies. The unit is equipped to measure ambient air temperature, stack temperature, O2, CO (H2 compensated and high range), NO and pressure/draft.
Initial testing included adjusting air intake settings, available oxygen and test duration. Effects of each of these parameters needed to be understood so that the changes from installing the catalyst can be separated from boiler operating changes.
Thermal and gas data was taken for all test runs. The boiler typically had seven or eight periods of ignition during a 2-hour run.
Once ATI established a stable baseline after optimal burner tuning, the company found the catalyst did not show greatly improved performance when placed in the primary pass of the boiler. This was not unexpected because modern boilers achieve a high degree of combustion with low emissions. The catalysts effect becomes more pronounced the further the boiler is tuned from optimum operating conditions.
ATI tuned the boiler to give excessive emissions and tested the effect of varying catalyst size, shape and placement. Tuning the boiler to produce particle emissions was done by reducing the combustion air, and the combustion gas analyzer showed there is not enough oxygen left over in the system for the catalyst to light off properly. To overcome this, ATI plumbed in secondary air from an air compressor. Numerous tests were run to determine the effects of the amount and placement of the secondary air.
Testing of differing catalyst shape, size and position led ATI to abandon the approach of placing the catalyst in the primary pass. All of the catalysts that were tested in the primary pass appear to have been overheated, as evident by greying of the catalyst. The catalyst support (alumina in this case) is white and darkens when coated with catalyst. When exposed to excessive temperatures, the catalyst diffuses on the surface of the support, thereby greatly reducing its surface area and catalytic effectiveness, leading to the grey appearance.
Because the catalyst was becoming overheated at the very end of the primary pass, the next logical place to move the catalyst to is the beginning of the secondary passes. The inside of the boiler is not designed to have attachments for our catalyst. The beginning of the secondary passes is at the back of the boiler, and a metal jig was constructed to allow placement of the catalyst. No overheating was observed when the catalysts were placed in the secondary passes. ATI tested catalyst placement and size in the secondary passes and observed a sooting problem, because of an uneven flow distribution in the secondary air. As such, ATI fabricated an air diversion system to deliver the secondary air uniformly to the catalysts.
With extensive testing with and without catalysts and with blank catalyst supports, it became clear that ATI was not achieving the desired catalytic effect. At that point, ATI incorporated a heater to keep the catalyst at a uniform temperature. Again, no catalytic effect was seen. It thus appears that the catalytic combustor approach internal to the boiler combustion chamber is not effective for reducing emissions. Perhaps, placement of the combustor in the ducting system with a heater would provide a means of reducing emissions from oil-fired boilers.
Experiments of reducing emissions from burning coal were far more successful. To predict the possible performance of the catalyst in a coal-fired boiler, ATI used a catalytic wood stove equipped with an ATI catalyst to measure changes in the air pollution from a coal burn. Bituminous metallurgical grade coal was used as the fuel source. The effect was extraordinary, both as a reduction of visible air pollution and as a reduction of carbon monoxide emissions.
The catalytic effect is clearly visible in the temperature profile shown in Figure 1. 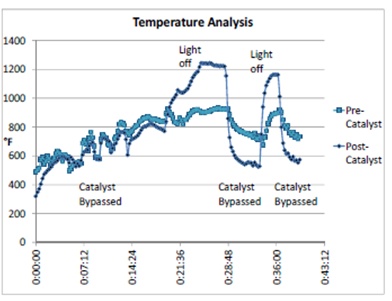 Figure 1. Temperature changes due to catalyst engagement
The rapid increase of the post-catalyst temperature indicates the catalytic afterburner effect ATI observed in off-gas streams with a high content of unburned material. The off-gas temperature rises by more than 600oF, reflecting the large quantities of PM emitted by the coal fire. The effect is clearly visible (Figure 2).

Figure 2. Coal fire emissions without (left) and with (right) catalyst
The smoke in the baseline configuration is the typical yellow coal-fire smoke while the remaining emissions of the catalyzed burn are very fine and white, almost like cigarette smoke, and dissipate very rapidly.

The CO emissions were reduced by 69 percent and the PM emissions by 86 percent. The catalytic combustor approach is clearly effective for reducing emissions from burning coal.