Increased electricity usage conservation and efficiency implementations in U.S. buildings are one of the most significant and immediately executable methods for carbon reduction, energy dependency reduction, user cost reduction and increased energy resources availability.
A current problem is that more location specific usage information is needed to direct users and building managers to where the best spots are to focus their ongoing conservation and efficiency change efforts. This needs to be affordable with an easy-to-understand user interface to provide sustaining conservation and efficiency verification.
In addition, commercial buildings landlords require an inexpensive and easily installed system to obtain actual tenant electricity usage versus by-the-square-foot lease contract billing. This not only provides actual billing but also fosters conservation and efficiency improvements, especially when those high usage tenants start paying regularly for actual usage. Present available methods require expensive rewiring and are economically unchangeable.

This phase 1 SBIR project provides the initial development of an innovative, simple and reliable power line communications transmission method to a central receiver so that the components of an electricity usage monitor/sender circuitry can be small, simple, ultra-low power and ultra-low cost. This inexpensive sender circuitry would be implemented directly into electrical receptacles, switches and miniature in-line-wired devices so that all electricity usage points in a home or building could be monitored economically. Effectively, the design would take the complexity and processing workload out of the many individual senders and put it in the central receiver unit.
WORK PERFORMED AND SUMMARY OF FINDINGS
The first task was to research existing Power Line Communications (PLC) products and technologies, verifying that nothing exists that could meet the cost target and sender simplicity. This research also provided some input in generating the new communications protocol specification.
To test the new signaling and protocol, breadboard hardware of various sender types and of the central receiver functions were built.
Initial signal transfer in an active commercial building was tested, and it provided initial data on both the signal degradation and signal cross over between AC power phases.
The central receiver breadboard composed of hardware interface, ADC data collection and signal processing software was key in verifying the specifications' various unique methods of detecting a simple signal from such a simple sender device.
Additional effort was put into researching FCC and UL and similar testing/certification requirements applicable to the sender hardware and the signals injected on the AC power line.
ThornProducts, LLC further researched and developed a specification for a previously planned user interface that provide the user quick, one-look feedback for the whole house electricity usage and where conservation or efficiency efforts would best be placed. A browser based demonstration is available.

This step toward completing a system design was successful in demonstrating that these basic signaling and receiver data processing functions would provide the low sender cost system needed. This included work to get estimated sender product cost as well as some unique methods of signals detection in the frequency domain and tying them to specific characteristics in the time domain. Of course, specification changes required and open issues to be addressed were surfaced for the next work on the product development.
COMMERCIALIZATION / POTENTIAL APPLICATIONS
The applications will be for every point monitoring in the building or residence for electricity usage with an easy-to-use display that enables the user to determine quickly the major spots to improve conservation and/or equipment efficiency. This new method and technology also will complement existing electricity management systems to widen dramatically their detailed monitoring and control within a building.
Partnering with an electric devices manufacturer to implement the technology directly into receptacles and switches is important to bring the end user price down so that mass deployment can begin. A plan is in place to produce the devices without such an OEM company, but this would be for niche applications and lower volume initial deployment.
This system also will, with its Flex Tenant Metering capability, allow landlords and commercial building managers to obtain actual electricity usage information per client that can be used for actual usage billing. The product allows the landlord/manager to easily modify, via database change, which electrical usage point is assigned to which tenant along with appropriate proportion of HVAC and common areas usage. This eliminates the need for per tenant usage rewiring and bulky expensive meters, and tenant changes are quickly accommodated. 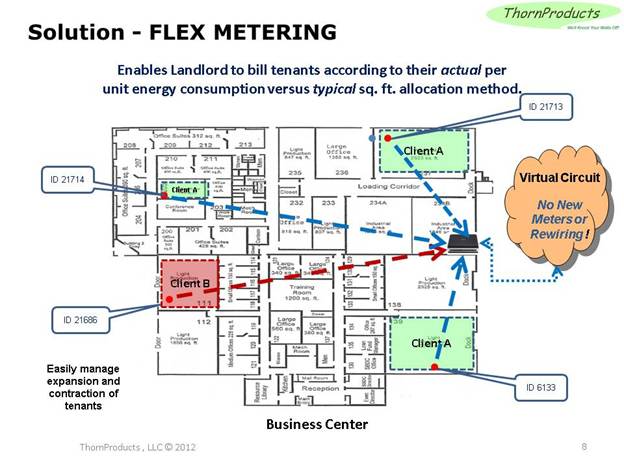