1 publications for this project

Energy, water, agriculture and sanitation, are considered the most essential and vulnerable necessities of healthy lives and prosperous sustainable growth for our nation and the world. Global warming, increased energy consumption, increasing agricultural demand, and new air and water pollution regulations that have been adopted in agriculture have prompted the need for diverse and integrated waste to energy solutions to meet the needs of farmers, the surrounding community, and the environment. The objective of this P3 project is to develop a biological wastewater treatment system that utilizes algal growth to simultaneously create renewable energy in the form of biodiesel and digester biogas, remove polluting nutrients, and abate green house gases. For Phase I of this research, bench-scale experiments were conducted using dairy wastewater from an on-campus dairy. A 50-gallon anaerobic digester was operated, and the effluent from this digester was treated in six experimental algae bioreactors operated under different conditions. These bench-scale bioreactor experiments were used to determine the oil productivity of algae grown on dairy wastewater while simultaneously determining the wastewater treatment capabilities of algal bioreactors. Lipid percentages were determined experimentally throughout the growth phase of two separate batch cultures at set time intervals. Water quality parameter such as nutrient concentrations (N and P) and biological oxygen demand were monitored to characterize the wastewater treatment efficiency.

Biodiesel is a renewable fuel that has the potential to improve people’s lives through energy independence and reduced environmental impacts. Biodiesel burns 50% cleaner than conventional petroleum-derived diesel (Haas, 2001) and can be used in any diesel engine with little to no modification. However, biodiesel is currently produced mainly from soy bean oil which requires high energy inputs such as fertilizer and pesticides that are polluting to the environment (Landis, 2007). The rapid growth of the biodiesel industry is also quickly absorbing the soy bean oil that was sold for export, and the relatively low oil production yields can not support the total U.S. demand for petroleum fuel (Duffield, 2007). 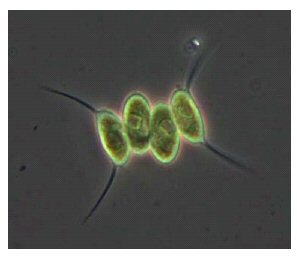 Biodiesel production from algae is promising because algae has the potential to solve this feedstock problem since algae biomass productivity is far greater per acre than terrestrial plants and their oil content would significantly exceed the oil productivity of soybeans (NREL, 1996). Previous research by the National Renewable Energy Laboratory (NREL) demonstrated biodiesel production from algae, but their final conclusion was that it was uneconomical (at the time) to use selective strains and controlled environments to produce biodiesel from algae. NREL suggested a more economical approach would be to combine efforts of algal production with wastewater treatment. This P3 research project was conducted to test the practicality of combined biodiesel production and wastewater treatment using dairy wastewater as a substrate. The ultimate vision for this research is to combine the biodiesel production from native species of micro-algae grown in agricultural wastewater while simultaneously removing polluting nutrients and sequestering carbon dioxide-rich flue gas from a generator running on biogas from an anaerobic digester.

Algal biomass was successfully produced from dairy wastewater and maximum lipid content of the biomass was determined to be 29%. These results were achieved with open bioreactors with mixed native cultures of algae. The total maximum lipid productivity was found to be 17 mg/liter wastewater/day. Also, nearly 100% phosphate removal and 97% ammonia removal was achieved in the algae bioreactors, showing that nutrient removal by this method is feasible.

This project successfully demonstrated the capabilities of an integrated system to treat wastewater and produce renewable energy at the bench-scale.

The oil productivity of the mixed species of algae observed in the bench-scale bioreactors is significantly higher than that of territorial crops. When scaled up, the expected production rate is 1,800 gal/acre/year, assuming the same environmental conditions year round. In comparison soy can currently only produce 48 gal/acre/year (Pimental Patzek, 2005). Thus, production of biodiesel from algae is 37 times more efficient than from soy, based on area of land used. Previous NREL studies demonstrated biodiesel production rates of 2,600 gal/acre/year using pure cultures of high-yield algae grown under controlled conditions. It is remarkable that similar production efficiencies were observed in this P3 project with mixed cultures of native algae grown on dairy wastewater under relatively uncontrolled conditions.

The bench-scale experiments also demonstrated the effectiveness of algae at nutrient removal from wastewater by reducing the ammonia concentrations from 30 mg/L NH3 (as N) to below 1 mg/L NH3 (as N) and removed phosphate with nearly 100% efficiency in 9 days. The large uptake of nutrients by biomass indicates that the biomass debris left after oil extraction will be an effective and easily transportable crop fertilizer.

Data from the bench-scale algae bioreactors are being used to direct scale-up designs for a larger system to be constructed in Phase II. A pilot scale project will be needed to determine life cycle costs and demonstrate industrial feasibility of a system such as this. The scale of Phase II will be sufficient to test culture, harvesting and extraction methods on a meaningful scale.

This technology could benefit not only the U.S. and other industrialized countries but also developing countries that lack sanitation and energy infrastructure. In both settings it would give people the power to grow a clean burning renewable fuel while simultaneously cleaning agriculture wastewater. These results can have significant impacts on the way wastewater is treated in the future and the sources of our renewable energy.

The proposed phase II objectives can be broken down into 6 objectives:

Using the information found from Phase I, a pilot-scale high-rate algae pond can be deigned to treat the Cal Poly Dairy wastewater. A high-rate algae pond is a shallow, 0.3 m depth, “raceway” design where mixing is provided by a paddlewheel. A mobile dissolved air flotation (DAF) unit will be constructed to harvest algae from various algae biomass sources. Once the algae are harvested in large enough quantities a mobile oil extraction unit will be designed and built using a 3-phase centrifuge which will disrupt algae cells, releasing oils, and continuously separate the oils, algal biomass and water into three separate streams. Biodiesel will be produced from the extracted oils using a demonstration biodiesel reactor operated by the Cal Poly Biodiesel Club.

No journal articles submitted with this report: View all 1 publications for this project