The experiments proposed within this project are designed to address specific mechanistic hypotheses regarding the interactions between inhaled ultrafine particles and specific pulmonary cell populations. In vitro experiments are best utilized to provide a mechanistic link and biological plausibility for the whole animal and controlled clinical (human) exposures, described in the other programs of this Particle Center. In some circumstances they can be used to screen materials for acute toxicity or provide an initial ranking of response. In our original proposal we had suggested a focus on identifying specific responses and mechanisms that may be involved in the enhanced susceptibility of diabetic. We continue to explore this in the context of the oxidant stress hypothesis of PM induced effects.

During the past year we have focused on developing approaches that could be used to measure cellular responses to collected and fractionated sample of ambient ultrafine PM. Our strategy has been to use samples obtained by Kim Prather from various sources using a novel growth tube device that would increase the yield of material available for testing. Each sample was adjusted to the same final concentration and evaluated in our indicator A549 cell line. Our previous work has shown these cells to be useful as a screen for the ability of particle samples to induce oxidative stress. The characteristics of the samples collected between the Ports of Long Beach and Los Angeles are shown in Table 1 and the cellular data in Figure 1. Parallel to the collection of these samples, physical and chemical ambient measurements of atmospheric gas and aerosols were made. From these measurements, it was determined that the major sources of the particles were marine diesel combustion, local diesel pollution, nearby freeway pollution, biomass burning, and transport of pollution from Californias Central Valley. 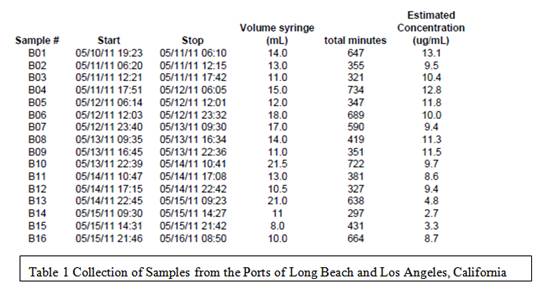 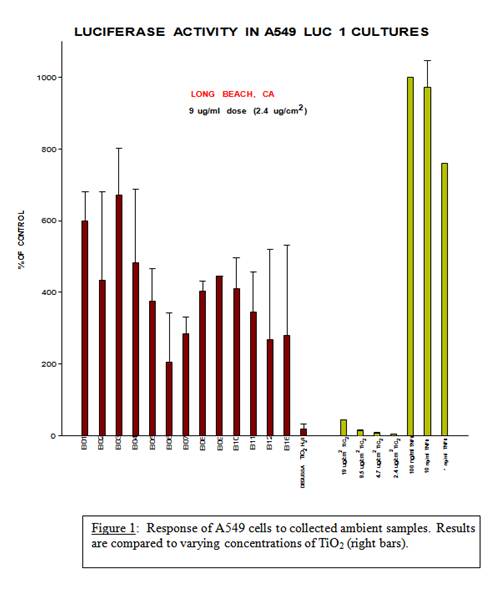 Journal Articles on this Report : 10 Displayed | Download in RIS Format