The animal studies were designed to be complementary to the epidemiological and clinical studies and further test hypotheses derived from those studies, but also to explore novel areas of PM research such as effects on the brain, on the developing organism, or the impact of using cleaner fuel on diesel exhaust-induced health effects. Thus, response measurements took into account endpoints determined in the epidemiological (Core 2) and clinical (Core 3) studies. In addition, based on our earlier findings of translocation of inhaled UFP from nasal deposits to the brain, effects on the CNS were also assessed.

Title: Pulmonary and cardiovascular effects of ambient ultrafine particle-containing aerosols in a rat model of cardiovascular disease
Several studies were done using JCR rats, a model of type II diabetes. Although these rats are not hyperglycemic, the JCR cp/cp rats are obese, hyperlipidemic, hyperinsulinemic, and have atherosclerotic and ischemic lesions that are hallmark features of human type II diabetes. We completed two studies with the JCR rats, one in which they were exposed to freshly-generated diesel exhaust emission aerosols (two fuel types with high and low sulfur content) in a mobile laboratory and another where the rats were exposed to concentrated ambient UFP-containing aerosols using the Harvard ultrafine particle concentrator (HUCAPS). Endpoints related to lung inflammation, inflammatory cell activation, acute phase responses, and platelet activation were measured after exposure. Groups of rats were also implanted with radiotransmitters to continuously monitor changes in heart rate, blood pressure, temperature, and activity associated with exposure to exhaust emissions or clean, filtered air.
Exposures of Rats to Freshly-Generated On-Road Aerosols Background: Humans with type II diabetes have been shown in recent epidemiological studies to be susceptible to the adverse health effects related to ambient particulate matter exposures. There are several animal models of diabetes, of which one is the JCR:LA-cp rat. Although these rats are not hyperglycemic (according to published literature and our results), the JCR cp/cp rats are obese, hyperlipidemic, hyperinsulinemic, and have atherosclerotic and ischemic lesions that are hallmark features of human type II diabetes. Heterozygotes or homozygous normals (designated by JCR +/?) are not obese or hyperinsulinemic and do not exhibit the arteriosclerotic lesions that the cp/cp rats do. Females of the same strain are similar to the +/? rats, which is why males are used exclusively in our studies.
Objective: One of the hypotheses being investigated in our studies in coordination with the Cores 2 and
3 projects is that some of the adverse health effects associated with exposure to ambient particulate pollution are causally related to inhaled ultrafine particles (UFP) and their gaseous co-pollutants, especially when aerosols are freshly-generated. Our previous studies using an on-road tractor-trailer exposure system have been conducted in old F-344 rats and spontaneously hypertensive (SH) rats. Since our first study showed that there was high variability in particle number and gas concentrations when chasing other vehicles, we made modifications to the system (i.e. use of telescoping exhausts inlets mounted on the rear of the trailer [Fig. 1]) to achieve more continuous exposures by taking in the exhaust produced by the mobile laboratory's engine (primary particle size, 13-19 nm; mass concentration, 9-27 µg/m3; number concentration, 1.6-4.3 x 106/cm3). This design allowed different fuels to be used to create specific exhausts under realistic environmental dilutions. In the most recent truck study, we exclusively used the JCR rats, focusing on our mechanistic hypothesis relating to the sensitivity imparted by vascular lesions.
Unlike our earlier studies, the rats did not receive any pre-treatments, e.g. inhaled endotoxin or instilled influenza virus. Due to the limitation on the total number of animals that could be exposed, we focused on 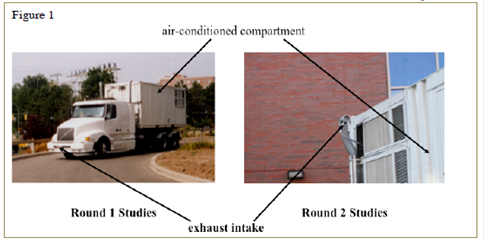 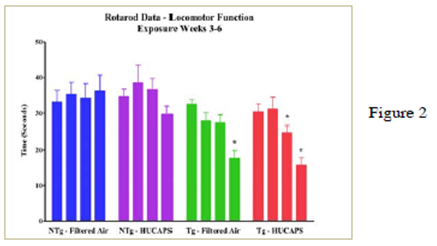 Another cohort of pups was exposed to HUCAPS aerosols or filtered air for 6 weeks and then recovered for 4 weeks. As with the study described above, locomotor function testing using the Rotarod system was done. In addition, their performance during the recovery period in a beam-break apparatus was evaluated to assess additional aspects of locomotor function, such as travelled distance and jumping. The mice were euthanized at the end of the 4-week recovery period and the same endpoints evaluated in brain tissue, lavage fluid, and blood. While the transgenic mice showed significant decreases in locomotor performance, there were no significant differences between filtered air and HUCAPs exposed mice (Fig.3). 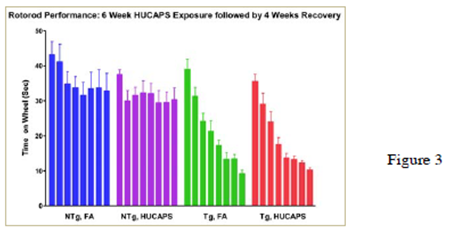 Studies of Nanoparticle Toxicity in a Mouse Model of Alzheimers Disease
Background: Exposure to pollutant mixtures can lead to CNS toxicity by both direct and indirect mechanisms. A direct mechanism is the translocation of particles to the brain and we have previously shown that very poorly-soluble ultrafine 13C and Mn oxide particles translocate to the olfactory bulb, with evidence for penetration to more distal brain regions (Oberdorster, Sharp et al. 2004; Elder, Gelein et al. 2006). Furthermore, increases in inflammatory mediators (TNFα, MIP2) and inflammatory cell activation (GFAP) were found in those regions where Mn accumulated (e.g. olfactory bulb, frontal cortex, striatum). In addition, peripheral or systemic inflammation can result in the diffusion of proinflammatory cytokines across the blood-brain barrier, where they can then interact with brain macrophages and microglial cells. Cytokines also activate the brain endothelium itself.
The link between CNS inflammation and neurodegenerative disease is well established in the case of Alzheimer's disease (AD). For example, systemic inflammation (elevated serum TNF-α) was recently reported to be associated with a 2-fold faster rate of cognitive decline in a human AD cohort (Holmes, Cunningham et al. 2009). In addition, several groups have found associations between "pro-inflammatory" single-nucleotide polymorphisms in toll-like receptor 4 (TLR4) and AD (Minoretti, Gazzaruso et al. 2006; Balistreri, Grimaldi et al. 2008; Balistreri, Colonna-Romano et al. 2009). Current thinking is that inflammation accelerates underlying neuropathology in AD, rather than having a causal role. The cells of the CNS responsible for producing pro- inflammatory mediators include astrocytes, microglia, and neurons (Strohmeyer and Rogers 2001). Acute and chronic models of brain inflammation have been developed to probe how this process affects AD pathology and synaptic integrity/neuronal activity. The 3xTg-AD mouse model of AD (presenilin knock-in mice, which also express mutant forms of human tau and amyloid beta proteins), which develops both amyloid plaques and tau pathology in a progressive and age-dependent pattern (Oddo et al., 2003; Mastrangelo and Bowers, 2008), exhibits a 15-fold up-regulation of TNF-α and 11-fold up-regulation of MCP-1 in the entorhinal cortex as compared to non-transgenic mice (Janelsins, Mastrangelo et al. 2005). Additionally, this increase correlates with a specific increase in F4/80-positive microglia and macrophages in the 3xTg-AD entorhinal cortex. The link between neuroinflammation and disease severity is well-established for AD, as demonstrated for example by the blockade of TNF signaling after systemic administration of endotoxin (McAlpine, Lee et al. 2009).
Methods: Our previous work showed that inhalation of poorly-soluble Mn oxide UFP led to accumulation of Mn in the brain following olfactory translocation and that markers of inflammation and oxidative stress were upregulated (Elder, Gelein et al. 2006). We, therefore, hypothesized that inhaled Mn oxide UFP would impact the progression of pathology in a mouse AD model. Using 4 month-old 3xTg-AD mice in pilot-type studies, we undertook a 12-day exposure (4 hrs/day) to poorly-soluble Mn oxide UFP alone or in combination with weekly inhalation exposures to aerosolized endotoxin (lipopolysaccharide, LPS). Groups of mice were left untreated (naïve) or received only the LPS aerosols. One day and two months following the final exposure, mice were sacrificed, perfused with 4% paraformaldehyde, and brains were progressively dehydrated in 30% sucrose and coronally sectioned at 30 µm. Free-floating sections were separately processed for microglia staining using the Iba1 antibody or astrocytes using a GFAP-specific antibody. Quantitative image analysis revealed heightened activation of Iba1-expressing microglia in the hippocampus and dentate gyrus one days following Mn oxide aerosol exposure alone or in combination with LPS (Figure 4). Quantitative image analysis of staining intensities for GFAP indicated that astrocyte activation was similarly enhanced. These results indicate enhanced activation of the innate immune system in brain regions that are relevant to the pathology of AD and raise the possibility that disease severity could be accelerated with inhaled pollutant exposures. Furthermore, these changes in inflammatory cell activation state persisted through two months post-exposure (Figures 5-7).
These findings using Mn oxide model UFP raise the intriguing possibility that more environmentally- relevant exposure mixtures could have similar effects in AD mice. Indeed, the findings presented elsewhere in this report by Drs. Johnston and Cory-Slechta showing persistent glial cell activation in adult mice that were exposed to HUCAPS aerosols in the neonatal period lend support to this notion. As we pursue these findings and attempt to explain them mechanistically, it will be critical to distinguish between direct (i.e. particle translocation) and indirect (inflammatory mediator production). 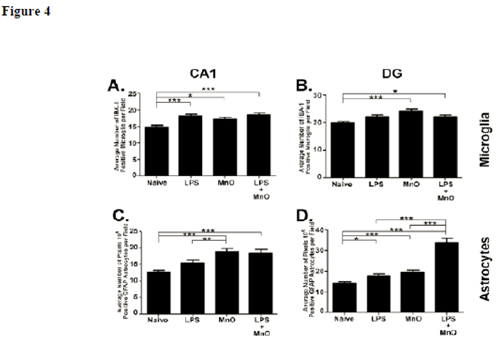 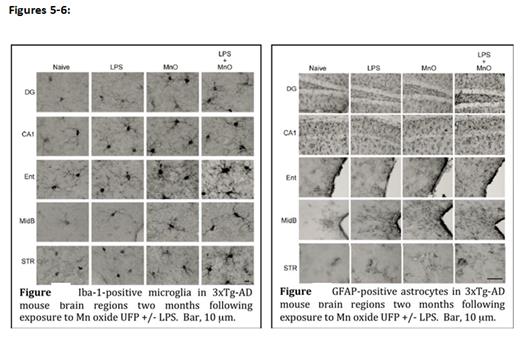 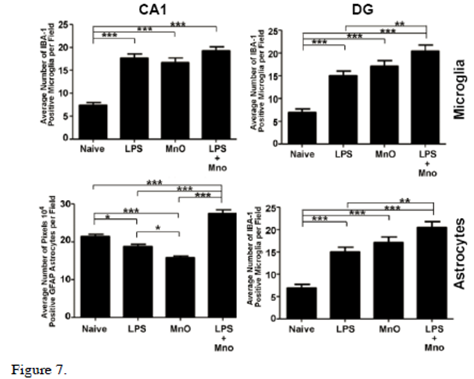 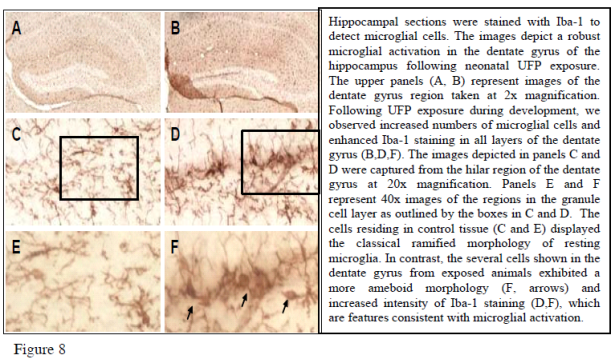 Conclusions: Firstly, early neonatal life exposure to ultrafine particles show that they can translocate to several organs following postnatal lung exposure. Secondly, early life ultrafine particle and ozone inhalation induces inflammatory cell activation in the brain and this persists for several weeks post-exposure (into adulthood for this species). Third, early life ultrafine particle and ozone inhalation sensitizes the lung to later life environmental and viral challenges. An alternative interpretation is that aging enhances sensitivity to later life environmental challenges, something that we have reported before in PM Center-supported work. 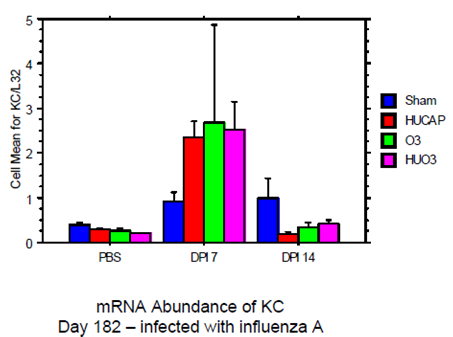 Are ambient ultrafine particles a risk factor for Parkinson's Disease?
Background: Ultrafine particles can translocate from deposition sites on the nasal olfactory mucosa to the CNS. The hypothesis was tested that early life postnatal exposure to concentrated ambient ultrafine particles would sensitize the CNS to subsequent adult challenge with paraquat + maneb (PQ+MB), a well- established pesticide-based model of the Parkinsons disease phenotype (PDP).
Results: Mice exposed postnatally to concentrated ambient ultrafine particles were significantly more sensitive to the locomotor-reducing effects of PQ+MB than sham controls, or those exposed to UFP alone or PQ+MB alone. UFP and PQ+MB significantly altered catecholamine levels in both the nigrostriatal and mesocortical dopamine pathways. UFP had a particular influence on striatum, increasing NE, DOPAC, and DA turnover (DOPAC/DA) levels, while PQ+MB generally impacted midbrain, decreasing 5HT, DOPAC and dopamine turnover. An interaction between UFP and PQ+MB on cortical 5-HT levels was evidenced as a significant 5-HT decrease in PQ+MB treated animals compared to both sham controls and UFP +PQ+MB treated mice. Cortical DA was also increased in PQ+MB treated animals.
Conclusions: This and additional findings of effects on dopamine pathways and 5-HT levels indicate that early life UFP enhances locomotor reduction in response to PQ+MB challenge and changes striatal catecholamines (DAergic cell terminals), a region critical to PD, while PQ+MB in the same animals produces catecholamine changes in the ventral midbrain (DAergic cell bodies). Conceivably, this concurrent damage to striatum and midbrain could increase nigral cell death and thereby contribute to a PDP.
Significance to the field:
The potential of inhaled ultrafine particles of ambient particulate air pollution for inducing effects on the CNS has been suggested based on several toxicological and some recent epidemiological studies. Knowledge of underlying direct and indirect mechanisms involving CNS translocation, role of adsorbed organic and inorganic chemicals and of systemically vs. locally-induced effects is necessary for assessing the contribution of ultrafine particles to the induction of adverse effects by particulate air pollution.
Relationship to overall Center goals:
These studies are an obvious extension of our Center research focusing on ultrafine particles and their role in causing extrapulmonary effects, specifically with the CNS as a sensitive target organ.
Relevance to the Agencys mission:
The ubiquitous ultrafine particle mode of ambient air pollution is not directly regulated with a specific NAAQS. Given the diversity of ultrafine particle sources involving both anthropogenic and natural sources a generic standard based on mass or number concentration would not be appropriate. Rather, specific sources may be targeted in terms of reducing emissions, based on the identification of hazard of ultrafine particles emitted into the atmosphere.
Conclusions from the animal studies are:

No journal articles submitted with this report: View all 62 publications for this subproject