The objective of the Core 4 studies is to correlate physico-chemical particle characteristics (from Core 1 measurements) with pulmonary and cardiovascular endpoints following exposure of animals to inhaled ambient concentrated ultrafine/fine particles, inhaled freshly-generated exhaust particles from low and ultralow diesel fuel, and intratracheally administered ultrafine and fine ambient particles from different sites and sources. Effects measurements will take into account endpoints determined in the epidemiological (Core 2) and clinical (Core 3) studies and coordinate mechanistic evaluations with Core 5 in vitro studies. In addition, effects on the CNS will also be assessed.

Exposure to pollutant mixtures can lead to CNS toxicity by both direct and indirect mechanisms. A direct mechanism is the translocation of particles to the brain and we have previously shown that very poorly-soluble ultrafine 13C and Mn oxide particles translocate to the olfactory bulb, with evidence for penetration to more distal brain regions (Oberdörster et al., 2004; Elder et al., 2006). Furthermore, increases in inflammatory mediators (TNFα, MIP2) and inflammatory cell activation (GFAP) were found in those regions where Mn accumulated (e.g. olfactory bulb, frontal cortex, striatum). In addition, peripheral or systemic inflammation can result in the diffusion of proinflammatory cytokines across the blood-brain barrier, where they can then interact with brain macrophages and microglial cells. Cytokines also activate the brain endothelium itself.
The link between CNS inflammation and neurodegenerative disease is well established in the case of Alzheimer’s disease (AD). For example, systemic inflammation (elevated serum TNF-α) was recently reported to be associated with a 2-fold faster rate of cognitive decline in a human AD cohort (Holmes et al., 2009). In addition, several groups have found associations between ‘pro-inflammatory’ single-nucleotide polymorphisms in toll-like receptor 4 (TLR4) and AD (Minoretti et al., 2006; Balistreri et al., 2008, 2009). Current thinking is that inflammation accelerates underlying neuropathology in AD, rather than having a causal role. The cells of the CNS responsible for producing pro-inflammatory mediators include astrocytes, microglia, and neurons (Strohmeyer and Rogers, 2001). Acute and chronic models of brain inflammation have been developed to probe how this process affects AD pathology and synaptic integrity/neuronal activity. The 3xTg-AD mouse model of AD (presenilin knock-in mice, which also express mutant forms of human tau and amyloid beta proteins), which develops both amyloid plaques and tau pathology in a progressive and age-dependent pattern (Oddo et al., 2003; Mastrangelo and Bowers, 2008), exhibits a 15-fold up-regulation of TNF-α and 11-fold up-regulation of MCP-1 in the entorhinal cortex as compared to non-transgenic mice (Janelsins et al., 2005). Additionally, this increase correlates with a specific increase in F4/80-positive microglia and macrophages in the 3xTg-AD entorhinal cortex. The link between neuroinflammation and disease severity is well-established for AD, as demonstrated for example by the blockade of TNF signaling after systemic administration of endotoxin (McAlpine et al., 2009).

Our previous work showed that inhalation of poorly-soluble Mn oxide UFP led to accumulation of Mn in the brain following olfactory translocation and that markers of inflammation and oxidative stress were upregulated (Elder et al., 2006). We, therefore, hypothesized that inhaled Mn oxide UFP would impact the progression of pathology in a mouse AD model. Using 4 month-old 3xTg-AD mice in pilot-type studies, we undertook a 12-day exposure (4 hrs/day) to poorly-soluble Mn oxide UFP alone or in combination with weekly inhalation exposures to aerosolized endotoxin (lipopolysaccharide, LPS). Groups of mice were left untreated (naïve) or received only the LPS aerosols. One day and two months following the final exposure, mice were sacrificed, perfused with 4% paraformaldehyde, and brains were progressively dehydrated in 30% sucrose and coronally sectioned at 30 ìm. Free-floating sections were separately processed for microglia staining using the Iba1 antibody or astrocytes using a GFAP-specific antibody. Quantitative image analysis revealed heightened activation of Iba1-expressing microglia in the hippocampus and dentate gyrus one days following Mn oxide aerosol exposure alone or in combination with LPS (Figure 1). Quantitative image analysis of staining intensities for GFAP indicated that astrocyte activation was similarly enhanced. These results indicate enhanced activation of the innate immune system in brain regions that are relevant to the pathology of AD and raise the possibility that disease severity could be accelerated with inhaled pollutant exposures. Furthermore, these changes in inflammatory cell activation state persisted through two months post-exposure (Figures 2-4).
These findings using Mn oxide model UFP raise the intriguing possibility that more environmentally-relevant exposure mixtures could have similar effects in AD mice. Indeed, the findings presented elsewhere in this report by Drs. Johnston and Cory-Slechta showing persistent glial cell activation in adult mice that were exposed to HUCAPS aerosols in the neonatal period lend support to this notion. As we pursue these findings and attempt to explain them mechanistically, it will be critical to distinguish between direct (i.e. particle translocation) and indirect (inflammatory mediator production). Furthermore, we will focus on addressing the question of whether or not immune cell activation is linked to an acceleration of neuropathology. Lastly, we will explore behavioral changes that might result from the pathology. 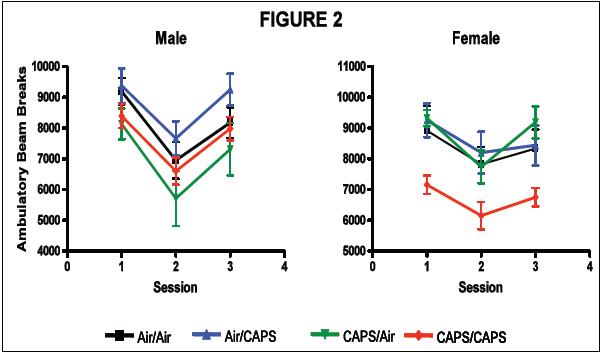 relative to control, with modest reductions produced by postnatal only (Air/CAPS) and some reversal of the reductions in FI rate with developmental only CAPS exposure when followed by adult re-exposure to CAPS (CAPS/CAPS). In females, postnatal only CAPS exposures (Air/CAPS) result in increased response rates relative to all other groups over this time frame. Some evidence for a trend towards decreased rates began to emerge in developmentally exposed females (CAPS/CAPS and CAPS/Air) that will be followed up in subsequent studies.

Plasma samples were collected from a subset of CAPS-exposed animals 24 hours following final CAPS exposure. Corticosterone was quantified by colorimetric enzyme immunoassay. Figure 4 shows corticosterone is significantly decreased in male CAPS/Air animals compared to filtered air control (p<.01), the same group exhibiting significant reductions in FI response rates and the lowest levels of locomotor activity. Developmental CAPS exposure markedly increased corticosterone in females (CAPS/Air and CAPS/CAPS). The persistence of these changes and their relationship to behavioral changes will be explored in subsequent studies.
Preliminary data described here indicate that developmental CAPS is capable of eliciting an astroglial response in the ventral midbrain that appears to persist for at least 7 weeks, that CAPS is capable of producing behavioral toxicity that is gender-dependent as measured by changes spontaneous locomotor activity and measurement of FI performance. The hypothalamus-pituitary-adrenal (HPA) axis (the body’s stress response system) also appears to be a target of CAPS-induced toxicity, as CAPS exposure causes corticosterone changes. It is apparent that the CNS and HPA axis are both targets of CAPS-induce toxicity.
Sub-Project Title: Susceptibility of Developing Lung to UFPs via Inflammatory and ROS Mechanisms. Investigators: C. Johnston   Summary of PM Center Pilot Project:
Children may be affected by environmental contaminants in ways that adults are not, both because their exposures may be higher and because they may be more vulnerable to the toxic effects of the contaminants. Early life exposures may contribute to diseases, either during childhood or later in life. We hypothesized that early life exposure to ambient ultrafine particles alters lung response and structural development; furthermore re-exposure as adults will lead to increased sensitivity. These studies were focused to (1) Identify critical time points in the differential response of newborn vs. adult lung to inhaled environmental particles. (2) Compare effects of age on uptake efficiency and particle distribution after exposure. These pilot studies were funded to add a developmental component to the PM Centers focus on source-specific health effects, focusing on both the respiratory tract and extra pulmonary organ systems, associated with ultrafine particle exposure. 4 and 56 day old C57Bl/6J mice were exposed to ambient “Real World” concentrated ultrafine particles for duration of 4 hours a day for 4 consecutive days followed by 2 days of recovery and then exposed for 4 hours a day for 4 consecutive days and examined at the end of exposure or allowed to recover until 8 weeks of age. At that time mice were either sacrificed or exposed to ambient concentrated particles for 4 days and examined at the end of exposure. Our second set of studies compared particle distribution in the lung and whole-body translocation in mice exposed to ~ 10nm Au ultrafine particles, which were used as a surrogate particle. We exposed mice to Au ultrafine particles at the end of HUCAP exposures for 4 hours and examine 24 hours post exposure. Our third set of studies will focus on later life susceptibility after early life HUCAP exposures.
Lavage data demonstrates that mice exposed beginning at 4 days of age to UFP then reexposed as adults induced lavagable PMNs 4 fold greater than mice that began exposure at 56 days of age going through the same exposure regiment. Lymphocytes were also induced approximately three fold greater in 4 day old mice upon re-exposure.
Figure 1: Cellular and Biochemical Analysis of Lung Lavage Fluid 24 hours post exposure to UFP. 4 or 56 day old mice were either sham exposed or exposed to UFP or for 4 hours a day on 4 consecutive days. Mice were then allowed to recover for 2 days before being re-exposed for 4 more days. Mice were then allowed recover for 6 weeks and were either sham or UFP exposed for 4 days and sacrificed 24 hours post the final exposure.   To begin to understand the role of translocation associated with UFP exposures, mice were exposed to UFP at 4 or 56 day for 4 hours a day on 4 consecutive days. Mice were then allowed to recover for 2 days followed by UFP exposure for 4 hours a day on 3 consecutive days. On the fourth day 10 nm gold particles were substituted and mice were exposed for 4 hours. Mice were then sacrificed 24 hours post exposure. Several organs were analyzed by ICP-MS (Inductively Coupled Plasma – Mass Spec). Gold was detected in several organs with high gold levels detected in the liver and kidney of mice that began exposure at 4 days of age as compared to 56 days of age. Also of note is that levels of gold were detected in several regions of the brain in both exposure groups.
Figure 2. ICP-MS (Inductively Coupled Plasma – Mass Spec) analysis 24 hours post exposure to gold particles following UFP exposure.   4 day old mice were also exposed to ambient concentrated particles for 2 weeks as described above. Mice were then allowed to recover until 56 days of age. At that time mice were then sensitized by oropharyngeal aspiration of very low-endotoxin Ova mixed with 0.1 μg LPS (E. coli) in PBS in a total volume of 50 μl. The sensitization procedure involves light anesthesia, gentle tongue protrusion, and application of the solution to the posterior pharynx. Mice were sensitized with Ova plus low-dose LPS on days 0, 1, and 2, followed by subsequent aerosol challenges with 1% Ova alone on days 14, 15, and 16 and sacrifice on day 18, a time point resulting in maximum eosinophilic airway inflammation. Our initial results suggest a suppression of neutrophil recruitment in the mice that were initially exposed to HUCAPs. Furthermore this experimental group also demonstrated a higher percentage of neutrophils as compared to the filtered air exposed groups.

Figure 3. Cellular and biochemical analysis of lung lavage differences between mice which were exposed to FA vs HUCAPS when put through our asthma model using mucosal sensitization with Ova+low dose LPS as adults.

Journal Articles on this Report : 9 Displayed | Download in RIS Format