The period covered by the report included:

In the following we give an overview over selected descriptive and regression results.

275 individuals participated in 1797 visits with a mean of 6.5 visits per person. At each visit (base program) a blood withdrawal was conducted. Air pollution was measured at a central measurement site in Augsburg throughout the complete study period. In addition (add-on program), for a subgroup of 112 participants personal measurements of ultrafine particles using a portable condensation particle counter (CPC) as well as temperature, humidity and noise were conducted in up to four visits. A diary collected data on behavior and exposure to air pollutant such as from cooking or ETS exposure during the period of personal measurements. Furthermore, endothelial function as a key element of coronary vulnerability and cardiac function characterized by electrocardiogram (ECG) measures were assessed in this subset. Table 1 shows different number counts in the base and add-on program.

Associations between air pollution and blood markers of inflammation and coagulation

As defined in specific aims #1 and #2 we investigated the association between blood markers of inflammation and coagulation in patients with IGT or type 2 diabetes and patients with a genetic susceptibility on the detoxifying pathway. Specifically, we looked at high sensitivity C-reactive protein (CRP), Interleukin 6 (IL-6), soluble CD40Ligand (sCD40L), plasminogen activator inhibitor 1 (PAI-1), fibrinogen, and myeloperoxidase (MPO).

Data on particles with an aerodynamic diameter smaller than 10 or 2.5 µm (PM10 and PM2.5, respectively), and particle number concentration (PNC) were collected at an urban background monitoring site south of the city center. We calculated individual 24 hour lags from lag 0 up to lag 4 as well as the 5-day average exposure. To estimate the associations between air pollutants and blood markers, additive mixed models with random patient effect were used. A confounder model was built for each blood marker separately, adjusting for long term time trend, meteorology (temperature, relative humidity), and weekday. Penalized splines were used to allow for non-linear confounder adjustment.

The first analyses were conducted taking patients with diabetes and patients with IGT together in one group based on the recommendations by the scientific advisory board. In secondary analyses, we also analyzed the three panels separately. 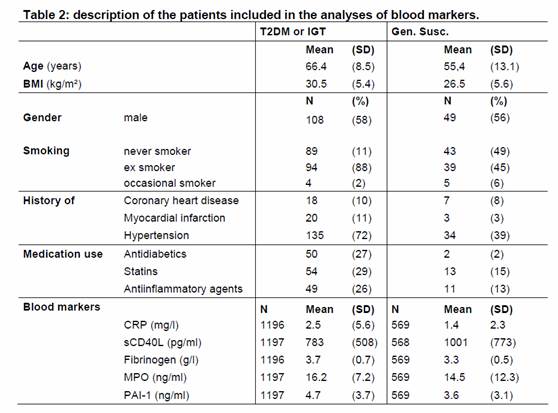 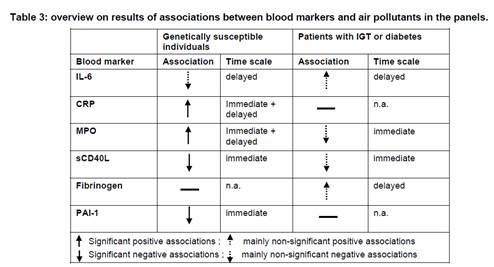 The clearest association was found for CRP and MPO in the panel of genetically susceptible individuals. For CRP, positive associations were seen for almost all lags, except for lag 4, and the five- day-average. The pattern was similar, however not as strong, for MPO (Figure 1).

The coagulation markers sCD40L and PAI-1 showed an immediate decrease in association with particles, especially for PM2.5. No association as see for later lags (Figure 2).

3.38% decrease in 1h-intervals of SDNN. We conducted several sensitivity analyses in order to test the

robustness of these findings.

Effects of personal PNC on SDNN did not change when excluding participants taking statins or additionally adjusting for ambient 1h-averages of PM2.5. We observed slightly weaker PNC effects when excluding participants with an intake of beta-blockers or visits with cooking. However, PNC effects were stronger in participants who were not exposed to environmental tobacco smoke or when adjusting for personally measured 5min-averages of noise exposure. The sensitivity analyses also showed only slight changes in PM2.5 effects on SDNN (Table 4).

We investigated the associations between 1h-averages of ozone and heart rate (HR), Bazett-corrected QT-interval (QTc), T-wave amplitude (Tamp) and T-wave complexity (Tcomp) in 64 individuals with T2D or IGT and in 46 healthy individuals with a potential genetic predisposition. Additive mixed models with random participant effects and a first-order autoregressive covariance structure accounting for autocorrelation between the repeated measurements were applied. Models were adjusted for ambient meteorology and time trends. Penalized splines were used to allow for non-linear confounder adjustment. Data were analyzed with SAS statistical package (version 9.2; SAS Institute Inc., Cary, NC, USA).

Table 5 describes the baseline characteristics and the ECG parameters of the participants. 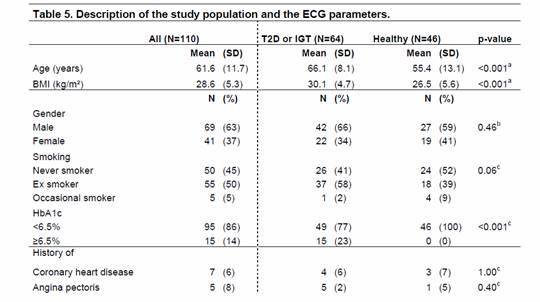 Participants with T2D or IGT were older, more often overweight, less hypertensive, and comprised more individuals with a previous MI in comparison to healthy participants with a potential genetic predisposition. As expected, elevated levels of glycosylated hemoglobin A1c and use of antidiabetic medication was only observed in participants with T2D and IGT. With regard to the ECG parameters, we only detected a significant difference between the two groups for Tamp with higher values in healthy participants. According to the median of participant-specific Spearman correlation coefficients HR showed a moderate correlation with Tcomp and QTc (r=0.6). Tcomp was negatively correlated with Tamp (r=-0.6). All other ECG parameters were uncorrelated (r<|0.5|). For all further statistical analyses Tcomp was log-transformed in order to produce normally distributed residuals.

During the study period the 1h-average concentration of ozone (± standard deviation) was 45.9µg/m³ (±33.3µg/m³). During the whole study period 1h-averages of ozone never exceeded the German information (180µg/m³) and alert threshold (240µg/m³). 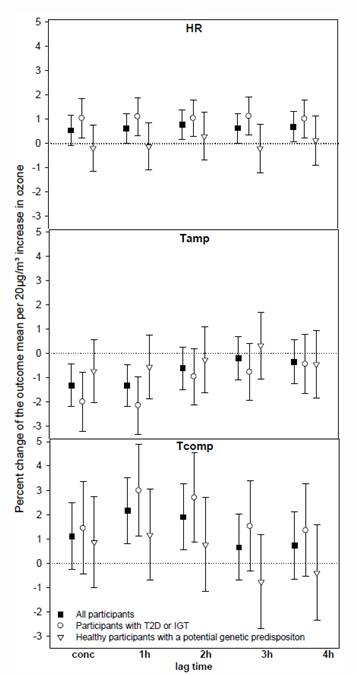 Journal Articles on this Report : 18 Displayed | Download in RIS Format