The objective of the epidemiological study is to examine the effect of fine and ultrafine particles on systemic responses, endothelial and cardiac function. The study was conducted in Augsburg, Germany, between March 19th 2007 and December 17th 2008.

The specific aims of the study are to:

Aim #2: Determine the effect of ambient fine and ultrafine particles on pro-thrombotic states of the blood in the above subject panels.

Aim #3: Determine the effect of ambient fine and ultrafine particles on endothelial dysfunction as a key element of coronary vulnerability in a subset of the above subject panels.

Aim #4: Determine the effect of ultrafine particles on cardiac function as characterized by ECG measures of autonomic function and repolarization in a subset of the above subject panels.

The objectives have not been altered during this reporting period.

The period covered by the report included:

In the following we give an overview over selected descriptive and regression results.

275 individuals participated in 1797 visits with a mean of 6.5 visits per person. At each visit (base program) a blood withdrawal was conducted. Air pollution was measured at a central measurement site in Augsburg throughout the complete study period. In addition (add-on program), for a subgroup of 112 participants personal measurements of ultrafine particles using a portable condensation particle counter (CPC) as well as temperature, humidity and noise were conducted in up to four visits. Furthermore, endothelial function as a key element of coronary vulnerability as well as cardiac function characterized by electrocardiogram (ECG) measures were assessed in this subset.

We investigated the association between 5-minute averages of personal PNC exposure and 5-minute intervals of HR as well as HRV parameters such as standard deviation of normal-tonormal intervals (SDNN) and root mean square of successive differences (RMSSD) in 32 participants with T2DM and 32 participants with IGT. In total, we analyzed more than 14,000 5-minute intervals for which ECG parameters were available. Additionally, effects of 1-hour averages of ambient air pollutants (PM10, PM2.5, and UFP) on 1-hour intervals of HR, SDNN, and RMSSD were analyzed. Additive mixed models with random participant effects and a firstorder autoregressive covariance structure accounting for autocorrelation between the repeated measurements were applied. Models were adjusted for ambient meteorology and time trends. Penalized splines were used to allow for non-linear confounder adjustment. Results are presented as %-change from the mean outcome level, either per an increase of 16,000 personal PNC particles/cm3 or the respective interquartile ranges of the ambient particle concentrations, together with 95% confidence intervals. Data were analyzed with SAS statistical package (version 9.2; SAS Institute Inc., Cary, NC, USA).

Table 8: Associations between personal measurements of 5-minute average particle number concentrations and 5-minute ECG-measures. Analyses considered concurrent and up to 15 minutes delayed exposures and adjusted for trend, meteorology and time of day.

Table 8 shows the associations between 5-minute exposures to PNC and HR and HRV assessing concurrent and exposures lagged up to 15 minutes. It shows a slightly delayed response of HR and an immediate increase in SDNN as well as RMSSD. Figure 1 shows, that while results from individuals with type 2 diabetes and IGT are not statistically different, responses appear to be more pronounced in individuals with T2DM. 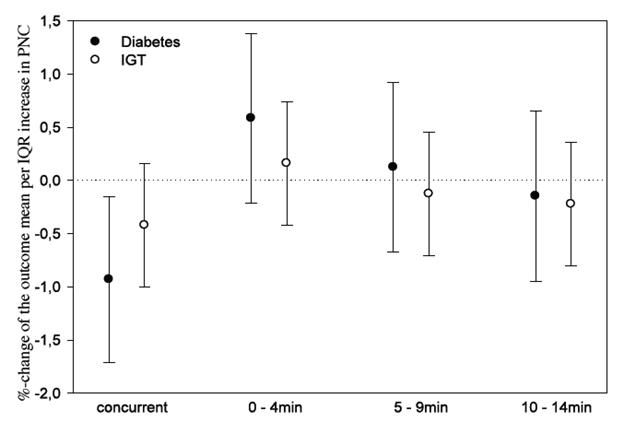 Table 9 shows the association between 1h average concentrations of personal PNC and ambient UFP, PM10 and PM2.5 and concurrent measures of HR and HRV. No consistent associations between personal or ambient particles and HR were observed. In contrast, concurrent association of PM10 and PM2.5 were associated both with SDNN and RMSSD. Effect estimates suggested slightly stronger associations between PM2.5 and HRV. The association between PM2.5 and HRV was stronger in individuals with IGT than those with T2DM (Figure 2), but the differences did not achieve statistical significance. 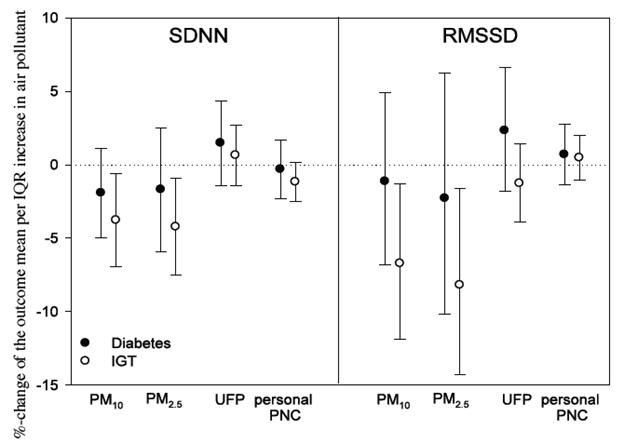 The study provides a clear indication that personal activities modify the personal exposures to particle number concentrations. In contrast, PM2.5 measured at a central monitoring station quantifies the overall particulate matter level at this day’s particular hour and is predominantly determined by meteorological conditions.

The data presented here suggests that both freshly emitted ultrafine particles as well as aged aerosol in urban areas are associated with changes in cardiac function. These exposures occurred repeatedly in urban settings of medium size which lack major truck routes or large industrial complexes. The study was conducted in subjects with type 2 diabetes and impaired glucose tolerance suggesting that these subgroups of the population might be at risk for cardiovascular disease exacerbation when transiently exposed to fresh and aged urban particulate matter.

By looking at traffic-related PM and aged aerosols characterized at an urban background site our epidemiological study contributes to the center’s goal of identifying sources with higher toxicity and pathophysiological mechanisms by which ambient ultrafine and fine PM trigger cardiovascular adverse health effects.

The study was conducted in adults with diagnosed type 2 diabetes or impaired glucose tolerance which have been hypothesized to be a susceptible subpopulation with respect to PM responses.

This research may provide evidence to adequately protect potentially susceptible subpopulations in the future. Moreover, the results of this study will help to evaluate the recently established low emission zone in Augsburg, Germany.

Finally, our results will add to the body of evidence that will be the basis for the planned setting up of new air quality standards in the United States as well as in Europe.

For the period of the No-cost Extension for the PM Center the following activities are planned:

1. Further statistical analyses using the innovative particle characterisation at the central measurement site including particle number, surface and mass concentrations of all particles and the non-volatile fraction as well as source indicators. In addition to ECG measures, blood biomarker of inflammation, coagulation and endothelial dysfunction will be analysed to further characterize the pathomechanisms. While the current report focuses on subjects with metabolic disorders, the final year of the study will in particular assess the effects of particles in the panel of genetic susceptible individuals and will test the potential for genetic susceptibility in all participants.