Our objective is to evaluate the role of key components of urban aerosol on acute phase reaction and prothrombotic states in the blood, endothelial dysfunction, cardiac function and classical cardiovascular risk factors in susceptible subgroups. We will focus on determining the effects of fresh ultrafine particles from specific sources such as traffic as well as aged aerosols in the accumulation mode which are mixtures of particles from different sources and secondary aerosols. We hypothesize that the following subgroups are susceptible to effects of ambient fine and ultrafine particles compared to control subjects: (a) Patients with coronary artery disease during rehabilitation, (b) myocardial infarction (MI) survivors, (c) diabetics, (d) individuals with enhanced inflammatory responses due to genetic polymorphisms in inflammation regulating pathways and/or in detoxifying pathways.

In Rochester 80 patients taking part in a cardiac rehabilitation program will be studied. In Augsburg, panel studies enrolling a total of 400 subjects will be conducted including 100 subjects per group b-d. A random sample of the population of Augsburg will be screened for genetic predispositions for enhanced inflammatory responses and slower detoxification pathways to select participants with genetic polymorphisms as well as healthy controls. In a sub-study, data on 24 hour ECG Holter monitoring, a time-activity diary including traffic exposures and stress level, and continuous personal exposure to the total particle number concentrations will be collected in 30 participants of each group. Outcome measures will be determined by the Vascular & Inflammation Core and ECG parameters will be provided by the Cardiac Core. The number concentration of ultra fine particles, particle size distributions and continuous particle mass measurements are conducted in Rochester, NY. Ambient air pollution in Augsburg will include continuous particle mass measurements, particle size distributions separated into volatile and non-volatile fractions, particle surface, elemental and organic carbon, sulphates and nitrates. PM associated oxidative stress will be measured in Rochester and Augsburg by the Aerosol Generation and Analysis Core. In collaboration with Core 1 source apportionment analyses will be conducted.

FIGURE 1 shows an overview of the study design. Subjects are invited to participate in seven repeated examinations. The visits are scheduled every 4-6 weeks on the same weekday and at the same time of the day to minimize the impact of weekly and circadian variation. For a subgroup of 30 participants in each panel the personal measurements are conducted in four examinations. A pilot phase was conducted between 19th and 23rd of February 2007 on six test patients. Newly established methods and devices were tested and feedback was given from the study nurses to the coordinating centre. No major changes in the study protocol seemed necessary; however, two special belts for an easier attachment of the 24hr Mortara ECG device were manufactured.

Figure 1. Study design.
The main phase started on the 19th of March 2007 and will presumably be terminated at the end of 2008. FIGURE 2 shows the recruitment and progress status of the study. The recruitment of genetically susceptible participants is already completed whereas the recruitment for subjects for the two remaining panels is still ongoing. Until 23rd of May 2008 672 subjects were contacted and 207 subjects could be invited to the study.
Exclusions and drop outs
Seven participants were excluded after the first visit (FIGURE 2), five subjects because of rheumatoid arthritis, one person because of arthropathic psoriasis and one due to Crohn’s disease. One volunteer had a myocardial infarction between the fifth and sixth visit, hence only the first five visits were kept in the study.
Eight subjects dropped out of the base program, two of them already after the first visit. As at least two visits per person are required for the statistical analysis, visits of both subjects are not further considered for analysis. Seven participants of the add-on program dropped both, the base and add-on program, five participants dropped the add-on program but continued with the base program. 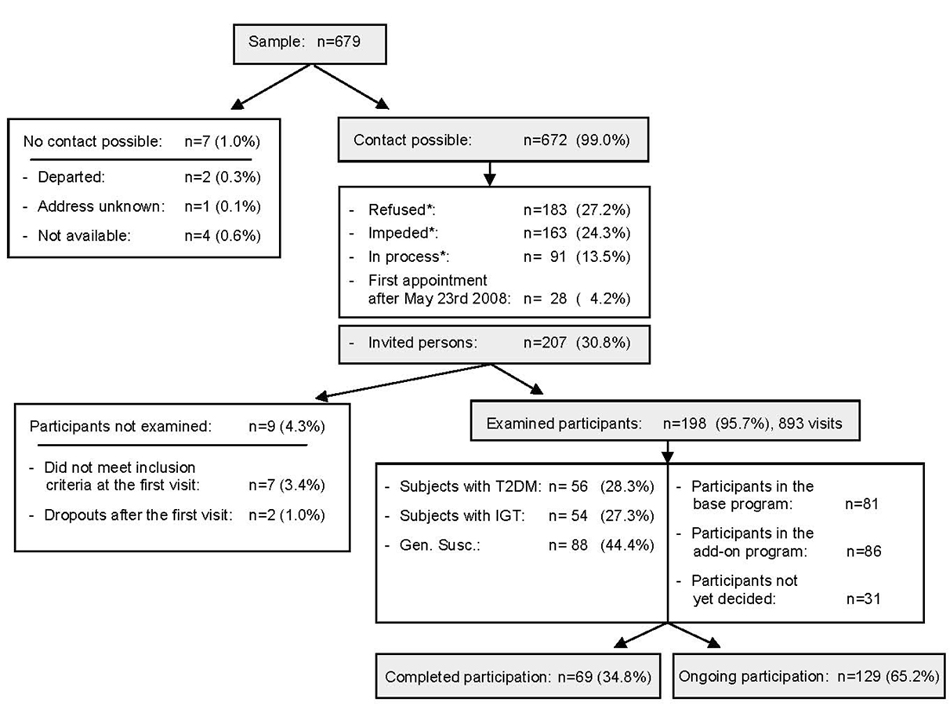 Figure 3. Number of visits conducted until May 23rd 2008, separately for each panel.
893 visits of 198 subjects are available with a mean of 4.5 visits per participant. An overview of the number of visits in each panel is given in FIGURE 3. Besides the base program, 86 volunteers (43%) completed 271 visits in the add-on program and 124 visits in the base program. 81 subjects (41%) with 467 visits exclusively participated in the base program, and 31 subjects (16%) with 31 baseline visits are still undecided about joining the add-on program.
56 subjects with T2DM (28%) with 150 visits, 54 subjects (27%) with IGT with 224 visits, and 88 subjects (44%) with potential genetic susceptibility with 519 visits are part of the study. 69 participants have already completed 7 visits. Seven subjects participated formally in an eighth visit as they cancelled a previous visit because of an acute inflammatory disease. The average number of repeated visits was 2.7 for the T2DM subjects, 4.1 for participants with IGT and 5.9 for the subjects with potential genetic susceptibility.
Figure 4 shows the frequency of CPC and noise measurement durations. 14 of the CPC measurements (5%) were missing and 17 (6%) had measurement durations of less than one hour. The incomplete data were mostly due to handling of the device by the study subjects. The CPC switches off in the case of vertical (tilted) position for more than 4 seconds and a manually restart is necessary. Unfortunately, not all subjects are able to restart the device on their own despite having instructions. We tried to dispose the producer of CPC for changing the software and make an automatically restart possible, but the negotiations were not successful. A preliminary analysis of the pilot phase has been presented at the EPA-GSF meeting in Montreat, NC, in spring 2007. First results from the pilot study indicate a good relation between personal exposure and the data of the central measurement site on an hourly basis depending on time spent indoors and ventilation habit of the study subjects. However, these analyses are limited to only few people (n=5) and the results of the main phase are yet to come.
24 noise measurements (9%) were absent. Only one measurement took less than one hour. The reasons for the missing noise measurements are defective microphones and errors in data storage.
Relative humidity and air temperature were missing only in one case, respectively. All other measurements took longer than five hours.

Figure 4. Frequency of measurement durations split by panel.
268 ECG measurements were conducted, while three measurements could not be conducted because of missing flash cards. This happened in the beginning of the main phase, now there is a sufficient number of flash cards available. 250 (93%) of the 268 ECG recordings were valid, in eleven cases (4%) the flash card was empty or unreadable, incorrect data were recorded for three ECG measurements (1%), and for four measurements (1%) the evaluation of the ECG remains to be done. The ECG data for the year 2007 is currently checked for plausibility. 261 measurements of the endothelial function (ED) were carried out. Two ED measurements could not be conducted because of technical problems and 5 participants refused the measurement (8 visits). Out of the 261 conducted measurements, 6 ED recordings (2%) had to be excluded because of inadequate quality.
Participant characteristics
Figure 5 shows the frequencies of age groups in the three panels. The medication intake of the subjects is shown in TABLE 1. For one person with IGT the information about the medication is still missing and will be gathered soon. Thus, the descriptive analysis includes only 53 subjects in this panel. Two genetic susceptible participants (2%) seem to be medicated with antidiabetic drugs. After completing data collection the assignment of all participants to the panels will be rechecked and changed if necessary 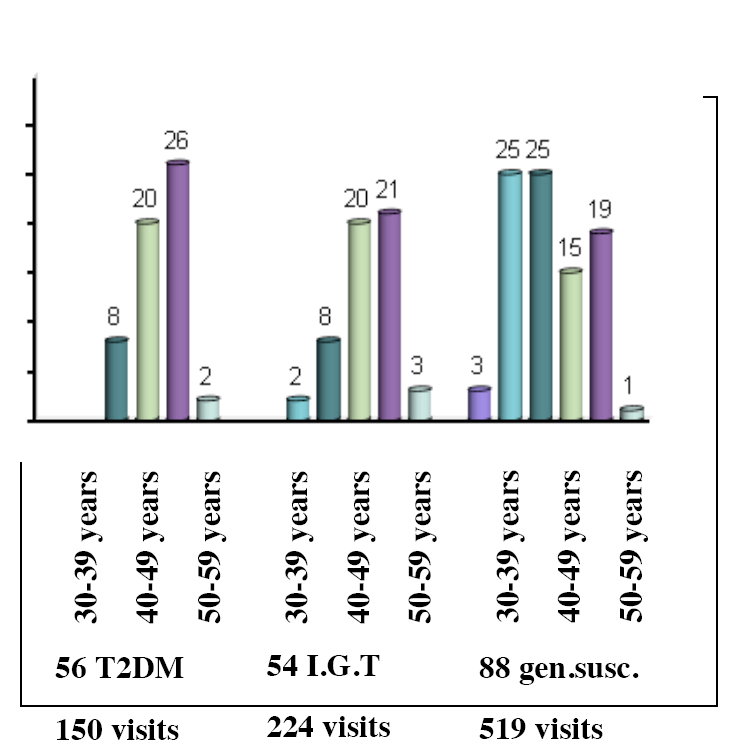 The studies will give evidence on health effects of key characteristics of the urban aerosol such as oxidative stress and on the role of sources in urban areas. In addition, they will assess the potential role of ambient air pollution concentrations on smaller time-scales than 24 hours.

For the upcoming year the following activities are planned:
Complete field work in December 2008
Include an additional measurement device:
Subjects participating in the add-on program will be equipped with a special belt called Actibelt1. Its high-tech buckle carries high precision 3D-acceleration sensors that allow for a continuous, unobtrusive long-term monitoring of physical activity in daily life. The belt will be applied to support the collection of activity data and could be used as an alternative in further studies.
Genetic analysis with Affymetrix 1000k chip
Data cleaning
Draw up the analysis plan
Statistical analyses
Pilot project on wood smoke:
This project will provide pilot data on the contribution of wood smoke to fine particulate air pollution as well as on the role of wood combustion particles in modulating cardiac function.

Journal Articles on this Report : 2 Displayed | Download in RIS Format