This Core is essential to the other research cores by providing data on the physico- chemical characteristics of ambient PM for correlation with epidemiological, clinical and toxicological outcomes and samples of particulate matter for toxicological investigation. Examples of the core's activity are the development of a Field Deployable ROS Monitor. The Core previously developed a laboratory version of a continuous monitor for particle-bound reactive oxygen species (ROS) (Venkatachari and Hopke, 2008a). This work demonstrated that it is possible to automate the use of dichlorofluorescin (DCFH) as a non-specific indicator of the oxidative capacity of particle surfaces. To move this system into the field to permit routine monitoring of particle-bound ROS, a number of problems had to be resolved, including sensitivity, user-friendly operation, reproducibility, and stability. The result has led to changes in the ROS continuous system. Further testing of the system continues with the expectation that it will be deployed at the NYS DEC site in Rochester where it will operate for at least one year. The improvements we have made appear to work, so it may be possible to operate the system continuously over an entire year.
Chemical Characterization of Particle-Bound ROS was another effort to correlate observed health effects with PM reactivity. To understand the mechanisms of particle-bound ROS formation, identify its likely sources, and determine the chemical pathways that might be influenced by air quality management strategies, we have pursued the chemical characterization of the constituents in particle-bound ROS. Using the α-pinene/ozone reaction to produce ROS, several new peroxide species have been separated and identified (Venkatachari and Hopke, 2008b). However, more reactive radical species may be lost in the time it takes to get samples into the analytical instruments. Further studies of more reactive by-products were conducted using spin trapping agents that can help to stabilize these species. The stabilized were can then examined with high resolution electron spin resonance and liquid chromatography/mass spectrometery in order to better understand the nature of the particle-bound ROS.

Title: Collection of source specific samples of urban aerosol
Research on the characterization of urban ultrafine and accumulation mode particles allows composition and size analysis in real time of single particles using aerosol time-of-flight mass spectrometry (ATOFMS) that was further improved by this Core. One objective of the research was to greatly expand the understanding of the chemical composition and impact of specific sources of ultrafine particles on human health, as determined in our epidemiological, clinical and toxicological studies. Another was to develop new sampling methods coupling ATOFMS with high volume cascade impactors such that samples will be collected that represent material primarily from well-defined specific sources. These samples permit improved characterization of the PM from specific sources as well as providing material for in vitro and in vivo testing of their toxicity in Cores 4 and 5. Also, a new method for collecting size-resolved samples of ultrafine PM from ambient air directly into an aqueous solution has been developed.
This method gets around issues required with sample collection on filters, where PM species have been determined to be difficult to extract.
Spin trapping technology using DMPO followed by analysis with ion-trap tandem mass spectrometry was used to determine the particle bound ROS activity of secondary organic aerosol. DMPO adducts with C-centered radicals and O-centered radicals were identified. Time series studies of particle bound ROS in Rochester, NY, showed diurnal variations with occasional high excursions on days with foggy conditions.
Title: Characterization of the nature of the particle bound reactive oxygen species (ROS) resulting from major biogenic VOC reactions with ozone.
A method for detection and characterization of ROS was developed to preserve these radicals for a sufficiently long time to permit analyses, using spin-trapping techniques. The formation of α-pinene/ozone first generation products resulting in a number of intermediate species was determined. Based on tandem mass spectrometry results, chemical structures of radicals from these reactions were identified. The structures of these radicals and the formation mechanisms have been revealed and showed radicals that have not been reported previously.
These results showed that the reactions of ozone with monoterpenes proceed via the formation of multiple oxygen- and carbon-centered free radical species. These radical species are highly reactive and thus, have generally not been measureable. A method for their detection and characterization was needed to preserve these radicals for a sufficiently long time to permit analyses to be performed. Radical-addition reactions, also called spin trapping techniques, allow the detection of short-lived radicals. This approach has been applied to products from the α- pinene/ozone reaction. Secondary organic aerosol (SOA) from a reaction chamber was collected on quartz fiber filters and extracted. The extracts were then reacted with either 5,5-dimethyl-1- pyrroline-N-oxide (DMPO) or diethyl-(2-methyl-1-oxido-3,4-dihydro-2H-pyrrol-2-yl) phosphonate (DEPMPO) followed by analysis with ion-trap tandem mass spectrometry (MSn) using electrospray ionization (ESI) in the positive scan mode. During the α-pinene ozonolysis a number of intermediate species are formed, some of which are reactive radicals. Proposed formation of two identified carbon- (MW 153 and 125 Da) and four oxygen-centered radicals (MW 157, 167, 183, and 199 Da) is illustrated in Figure 1. The detection and identification of radicals with molecular weights 199, 183, 153, and 167 Da supported previously suggested mechanisms and structures. A possible reaction mechanism leading to the formation of detected radicals with masses 125 and 157 Da has been reported for the first time (Pavlovic and Hopke, 2010). The structures and reactions presented in Figure 1 illustrate possible radical structures and the formation pathways for the first-generation reactions (standard gas-phase chemistry). The structures whose numbers are highlighted in grey have been confirmed by these studies (Pavlovic and Hopke, 2010).
Title: Development of a growth-tube for ultrafine particles that allows their chemical characterization by ATOFMS.
By growing ambient ultrafine particles with a growth tube (by condensation) they can be detected by ATOFMS and samples can be collected via impinging in fluids. A newly developed growth tube was used to collect samples in close proximity to ships and a local highway. The first growth tube had limited applicability due to its low flow rate, and a new design has been tested to collect higher masses. The final goal is to collect and study a broad range of aerosol sources for chemical analyses and subsequent in vitro cell culture studies. 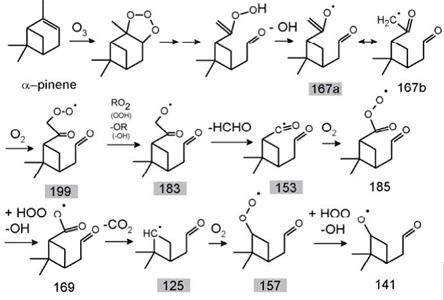 Figure 1.  Proposed gas-phase reaction mechanism of α-pinene and ozone leading to the formation of detected radicals.
In studies of the formation of secondary organic aerosols in indoor air through the ozonolysis of reactive terpenes that are components of household cleaning products, we examined the formation rates of particles and particle-bound ROS at low NOx concentrations. We are continuing these studies at realistic NOx concentrations added to the ozone and terpene to explore the role of nitrate radicals in particle and ROS formation.
At the suggestion of the Center's Science Advisory Committee, we have examined the ROS associated with main and side stream tobacco smoke (Zhao and Hopke, 2012). Both research and commercially available cigarettes were tested using mainstream and sidestream smoke generated by a Single Cigarette Smoking Machine. For mainstream smoke from regular and light cigarettes, the total quantities of ROS were 120-150 nmol and 90-110 nmol, respectively. For sidestream smoke, the values were 60-90 nmol and 30-70 nmol for regular and light cigarettes, respectively. The effects of the cigarette filter on the emissions were to reduce the particle mass and particle-phase ROS in the mainstream smoke.

Table 1 summarizes the particle-bound ROS concentration measured in previous ambient aerosol studies in units of equivalent nmol H2O2 per cubic meter air. According to respiratory parameters, the normal human breathing rate is ~12 breaths per minute with ~half a liter air inhaled per breath. Thus, the ROS concentrations could be converted to the ROS amount inhaled by human breath per hour (also shown in the table). Combined with the data from this study, we can estimate the length of human exposure to ambient air that is equivalent to smoking or being exposed to the sidestream smoke of a Marlboro (red) cigarette. Thus, if one were to continuously breathe ambient air for a total of 2 to 3 days, the resulting ROS exposure would be equivalent to smoking one Marlboro (red) cigarette. Air heavily impacted by traffic is more polluted, and one day of continuous ambient air exposure is equivalent to smoking one cigarette.
Significance to the field: This work provides a clearer picture of the nature of some short-lived but highly reactive species that are associated with freshly formed secondary organic aerosol. The work provides a better understanding of the mechanism of formation of SOA and ROS and the nature of the reactive species to which humans are exposed. It also indicates that ROS is associated with cigarette smoking and provides a basis for looking at the relative influence of ambient air on ROS exposure in units of cigarettes smoked.
Relationship to the overall Center goals: We hypothesized that particle-bound ROS might be an important contributor to the health effects resulting from oxidative stress. Thus, understanding the nature of the ROS components, their formation and their reactivity provides a better basis for understanding their potential role in inducing adverse effects. Also being able to put ambient ROS exposure into the context of a known human health threat (cigarette smoke), further emphasizes the need to reduce exposure to ambient PM.
Relevance to the Agency's mission: Understanding this oxidative chemistry is important to a fuller understanding of the formation of SOA and associated ROS in the ambient atmosphere. It helps to provide additional insights into the role composition might play in inducing adverse health effects and provides additional information regarding the implications of controlling ozone, a criterion air pollutant.
Potential practical applications: If ROS associated with biogenic SOA is a driver of adverse health effects, then regulatory action would need to focus more on ozone control as a basis for controlling secondary particulate matter.

No journal articles submitted with this report: View all 19 publications for this subproject