The objective of this research project is to determine the optimal combination of agronomic practices such as the addition of compost, synthetic fertilizer, and irrigation that would allow native species to survive, grow, clean up, and restore sites contaminated with polycyclic aromatic hydrocarbons (PAH). The overall research involves three major tasks:

A preliminary screening study was conducted to evaluate six grass species (Canada Wild Rye, Indian Grass, Indian Wood Oats, Prairie Brome, Side-Oats Grama, and Switch Grass) for their survival and growth on aged sludge from a Gary, Indiana harbor site. The layered design of adding topsoil, sludge, and a gravel layer supported growth of these grasses. The major issues of inadequate low porosity of the sludge material, low aeration, and lack of nutrient enrichment typically encountered when these grasses were planted directly on the sludge have been resolved. Visual inspection, above and below ground biomass values, suggested that Canada Wild Rye, Indian Wood Oats, and Side-Oats Grama may have the best survival potential when they were grown in the greenhouse study for optimizing the agronomic conditions to facilitate phytoremediation using selected native Ohio grasses.

Sludge from an industrial petroleum waste storage site in southwest Ohio was selected for an innovative study of cleanup using native grass species of Ohio. Undergraduate research assistants performed initial soil physical, chemical, and biological characterization in Dr. J.R. Shann’s phytoremediation and ecology laboratory in the Department of Biology at the University of Cincinnati as part of their summer training. Dr. Shann, her graduate students, and a postdoctoral fellow trained CSU students to estimate water-holding capacity, particle size distribution, organic matter, sequential extraction of metals from the sludge, total metals, and phytotoxicity of the sludge on grasses selected for the study. A postdoctoral fellow in Dr. Shann’s laboratory also presented techniques of gas and liquid chromatography to CSU students. Students were trained on using Gas Chromatograph with a Flame Ionization Detector and High Performance Liquid Chromatograph. Students also had an opportunity to appreciate identification and enumeration of certain microbial populations capable of degrading toxic petroleum products, such as PAHs, using the latest advances in molecular biology and genomics.

This research project uniquely describes the effect of sludge association with soil on its particle size distribution (PSD). Research conducted at the International Center for Water Resources Management revealed that in soils contaminated with sludge, finer particle sizes in the range of fine sand, silt, and clays tend to disappear so there is a shift in PSD from fine sand, silt, and clays to coarse-sized particles such as gravel and coarse sand. This shift increases the porosity of the soil, in the size range greater than 0.3 mm or mesh number 50. Thus soils contaminated with sludge may tend to drain faster than uncontaminated soils. In the size ranges corresponding to mesh numbers 100 (0.3 mm) and 50 (0.15 mm), soils contaminated with sludge show lower water-holding capacity than uncontaminated soils. The effect of sludge on soil used in this study is to reduce its water-holding capacity. This observation was critical to the overall research where cleanup of sludge-contaminated soils using native grasses is being investigated under optimal agronomic practices such as fertilizer and compost addition and irrigation. This component of the study suggests that sludge-affected soils require more frequent irrigation.

A greenhouse investigation is underway to measure the growth of six different grass species native to Ohio grown on PAH-contaminated soil. (A photograph of the greenhouse is included below.) Seeds of Canada Wild Rye, Prairie Brome, Side-Oats Grama, Indian Grass, Indian Wood Oats, and Switch Grass were germinated in 5-gallon buckets layered with topsoil, PAH contaminated soil, and a second layer of topsoil and grown for 5 months. Each layer is 76 mm thick. Four replicate buckets per grass species were treated with soil amendments such as N-Viro soil (processed biosolids), N-Viro soil and fertilizer (NPK), and NPK and topsoil as a control. Half of the replicates were watered every fourth day (frequent) and half were watered every sixth day (infrequent). Plant height, density, and chlorophyll were measured and significant differences determined using ANOVA statistical analyses. Environmental parameters within the greenhouse, such as temperature, humidity, light, soil moisture, and soil pH, also were measured. Canada Wild Rye and Side-Oat Grama treated with N-Viro soil under infrequent irrigation showed the best growth performance. Canada Wild Rye had a plant count of 64 per bucket, plant height of 24 cm, and a chlorophyll content of 42.4 SPAD units. Side-Oats Grama had a plant count of 128 per bucket, plant height of 42 cm, but a lower chlorophyll content of 23.8 SPAD units. Data showed that plants performed better under more frequent irrigation. A root bed was used to examine root morphology on this disturbed soil. Soil cores (30 mm diameter and depth to the gravel layer) were obtained for each treatment after 5 months. PAH in the sludge from all treatments and leachate currently are being extracted using Soxhlet and analyzed using GC/MS. 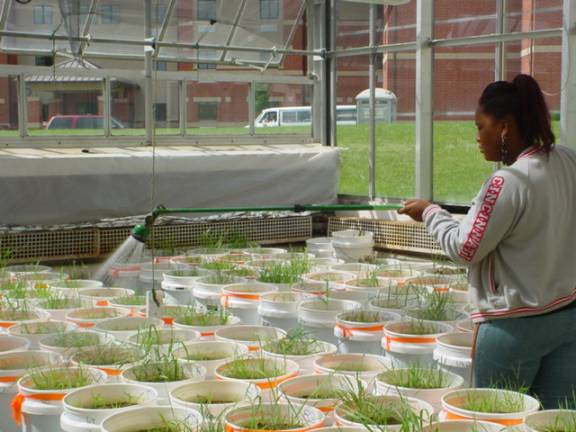 More conclusive results on performance of these grasses under optimal agronomic practices will be obtained once their root characteristics and degradation potential are determined as part of task 1 of this research project. We currently are in the process of acquiring a root bed scanner to facilitate this study. We will be completing this task in the next couple of months. We then will begin the next major task, which involves design and comparison of changes in PAH in the sludge collected from the study site and plant growth in agronomically managed and unmanaged containers. Natural succession will be mimicked in these containers using a heterogeneous planting of three native grass species chosen for their potential for plant growth and PAH remediation from task 1. Side-Oats Grama, Canada Wild Rye, and Switch Grass appear to be viable candidates for the succession study. These species, however, will be confirmed after we study their root morphology, and determine above ground and below ground biomass.

No journal articles submitted with this report: View all 16 publications for this project