The overall goal of this research is to determine adverse effects of multiple stressors on tissues, cells and macromolecules of fish, crayfish and fish-eating birds within a waterway and to incorporate these findings into hydrodynamic and biologically-based models enabling better understanding of the role of multiple stressors in population level responses. The overall result should enable ecologically-based management and a reduction in stressors.

The Sacramento River watershed is stressed by diversion of river flows, historical mining of copper, zinc and mercury, and agricultural and urban chemical runoff, including the recent redirection of saline drainage waters that contain selenium into the delta (Figure A-1). The combined stresses have led to deterioration in both surface and ground water quality creating an increasing concern about the impact of agricultural practices on terrestrial wildlife. The potential interaction of these stressors on the river, coupled with over-fishing, introduced species, and direct mortality from pumping juvenile fish into aqueducts, have driven several species of fish to near extinction. Populations of clams also show effects of pollutants in the upper San Francisco Bay. Historic contamination by heavy metals is now exacerbated by organophosphate pesticides at levels exceeding National Academy of Sciences recommendations, throughout the lower watershed and San Francisco Bay. 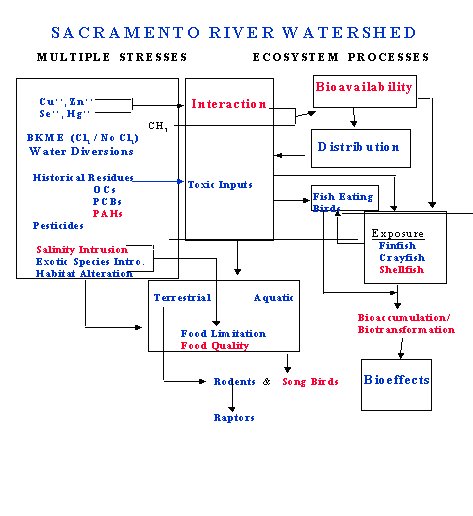 This project combines terrestrial and aquatic ecosystem studies to better meet Center objectives. By placing greater importance on studying the mechanisms of multiple stressor toxicity, the scope of this project now extends from the molecular and cellular levels, to diminished fecundity of individuals, leading to the decline of populations and loss of biodiversity at community and ecosystem levels. A valuable feature of the Center is its emphasis on comparative studies. In some instances, common mechanisms of action are being discovered in birds, fish, and rodents, enhancing our ability to interpret findings throughout the ecosystem.

Critical questions include: (a) which molecular, cellular, and organismal test systems best reveal effects of the stressors in each of the species of concern (b) which tests best indicate whether effects of multiple stressors are additive, antagonistic, or synergistic (c) which mechanisms link levels of biological organization, and (d) how might these affect targets of future investigative processes?

The Sacramento River watershed encompasses an area of 66,000 square kilometers. Surrounded by high mountains of the Sierras and Cascades to the east and Coastal Range to the west, this watershed includes a complex system of reservoirs that supply water to the agricultural areas of the central valley, and the urban areas of Southern California. From mountains and foothills to the north and east, the river flows through the Central Valley and, below the City of Sacramento, forms a large delta which receives inflow from the San Joaquin River. Orchards are abundant in the foothills and higher reaches of the valley, rice and other crops are major recipients of river water for irrigation. Large agricultural tracts and islands with abundant stone-fruit orchards are located in the delta which is continuous to the west with the San Francisco Bay. 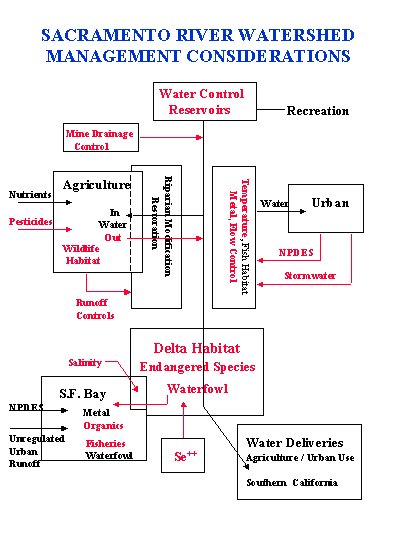 The management of the watershed is complex, and Figure A-2 illustrates the more important considerations. Multiple uses of the watershed have led to many ecosystem stresses resulting in concern by federal, state and local managers and a fundamental reassessment of land and water use.

Selection of field sites for Center activities has been based on existing toxicity data from mine drainage and agricultural return water inputs which have resulted in demonstrated ecosystem deterioration. Our rationale for selection of representative terrestrial study areas includes sites that have established runoff data from field experiments, and known bioaccumulation of specific inorganic and organic toxicants with demonstrated acute toxicity to test species of cladocerans and fish. Agricultural sites include orchards where dormant sprays are applied in the winter rainy season and the small Willow Slough watershed in Yolo County where surveys of birds and mammals are being conducted. Nest boxes have also been established and are monitored for kestrels and tree swallows to evaluate the habitat changes brought by agriculture to wildlife.

A complex data set has been collected in the first years of Center activities. We focused on stressors, including contaminants in sediments and water, agricultural chemical transfer to wildlife, and runoff inputs into agricultural drains and the river. The contaminant levels in populations of finfish and birds continue to be measured (Analytical and Biomarkers Core), and the distributions of larval stages of fish, and models of pollutant and larval fish movements through the system are now being integrated (Hinton and Orlob with assistance from Data Analysis and Decision Support Core). New methods, including use of solid phase micro extraction (SPME), are being developed through the Analytical and Biomarkers Core and used to measure contaminants in sediment invertebrates (crayfish and clams) and to link pollutants in real time by monitoring phytoplankton populations.

Results from Center studies identified data gaps, enabling us to develop plans to better integrate the data sets, fill gaps in the framework of the watershed model, and provide integration on specific chemical, physiological, histopathological, and ecological questions. The latter used biomarkers developed by the Analytical and Biomarkers Core. Each of the seven subprojects in the Sacramento River Watershed has specific plans to fill information gaps in the ecological processes diagram (Figure A-1). A number of projects (A.1 through A.6 -Hinton, Washburn, Fan, Higashi, Fry, Lasley and Wilson) involving birds, rodents, finfish, shellfish and crayfish are designed to determine bioeffects (see bottom right of Figure A-1).

Suborganismal studies, strongly supported by the Analytical and Biomarkers Core, investigate molecular through physiological phenomena and these levels of biological organization reflect changes over a time of minutes to days or weeks. If physiological alterations are protracted, the individual may show histopathological alterations, or reduced bioenergetics or inhibition of reproductive processes. These intermediate level changes may take weeks to months to detect. If the intermediate level responses are severe, population level effects may be seen. These could take months to years to occur and further illustrate the need for long-term data sets in ecotoxicologic investigations. Finally, the Sacramento River Watershed projects and the analytical chemical and biomarker core interactions focus on investigations at the molecular level and extend up to the level of populations. These include reproduction of birds and mammals, development of birds and fish, application of biomarkers to field situations, biochemical indicators, bioavailability, and liver pathology. Through the integrative efforts of the Data Integration and Decision Support and Transport and Fate Cores, processes are now being modeled which extend our combined effort to the community, landscape and region.

Certain subprojects will become involved in metals effects (A.1 through A.6), particularly mercury-selenium interactions and toxicity mechanisms to invertebrates, fish, and bioaccumulation through aquatic insects to birds. We will address how the interaction of metals and chemical species occurring in the ecosystem modify the bioavailability of these toxicants. Salinity intrusion into the delta, and effects on plankton and larval fish will be assessed directly with toxicity tests, and included in the river model.

Several innovative analytical chemical methods (Higashi with help from Analytical and Biomarkers Core) will be evaluated on continuing projects and newly initiated projects, including NMR studies (Fan and Hinton assisted by Higashi) of fish embryos exposed to metabolic and neurotransmitter toxicants (Wilson to direct) at critical stages in development. Data will be input into the model for fish exposure to agricultural drain water. SPME sampling methods (Higashi) will be used to evaluate sediment toxicants, water toxicants, and biotransfer of toxicants in the food web. New high pressure liquid chromatography (HPLC) methods (Higashi) will evaluate carotenoids and other pigments as measures of exposure of phytoplankton to agricultural toxicants, to monitor phytoplankton community structure and provide improved data for input into the ecological models (Quinn and Jassby of the Data Integration and Decision Support Core) of the river and delta.

The data on trophic transfer of pollutants (Fry and Hinton, assisted by Analytical and Biomarkers Core; Higashi in conjunction with Quinn and Jassby) through organisms (phytoplankton, aquatic insects, fish, and birds), will provide greater integration of the terrestrial studies into the watershed project, especially with the inclusion of studies of tree swallows and blackbirds living along agricultural drain water canals, where exposure to pesticides and selenium secondarily through aquatic insects occurs (Fry with assistance of Wilson). The discovery that Kestrels in Yolo County have high levels of selenium has prompted new studies of both selenium and mercury exposure to Kestrels in agricultural areas where historic deposition of mercury by winter flooding of farmlands has occurred.

Future studies will also emphasize effects on birds living along agricultural drains. These will focus on bioaccumulation of metals and of endocrine disruptive pesticides (dicofol, endosulfan, lindane, alkylphenols as mixing agents for agricultural chemicals). Laboratory models will be used for egg injections, chick exposures, and determination of the critical periods in development where agricultural chemical exposure will have a developmental impact.