The objectives of this project were to develop a facility for human studies of ultrafine particles and to utilize controlled human exposures to examine, in healthy and potentially susceptible subjects, the deposition of inhaled ultrafine carbon particles (UFP), and the role of UFP in inducing respiratory and cardiovascular health effects.

Because of the potential importance of finding clinical effects of exposure to ultrafine carbon at such low mass concentrations, we modified our objectives to confirm and expand on these initial observations prior to moving on to studies of comparison particles.

Approval of all of the human studies has been obtained from our institutional research subject review board; it is on file and current. Quality assurance (QA) is performed by Ms. Ellen Miles according to our QA Plan, with all standard operating procedures being up to date and having been reviewed.

Subsequent to the funding of this Science to Achieve Results (STAR) grant, the University of Rochester was awarded a U.S. Environmental Protection Agency (EPA) Particulate Matter (PM) Center grant. As a result, this STAR project became part of Research Core 3 of the PM Center.

We have developed a facility for experimental exposure of humans to ultrafine particles that permits the quantitative determination of the exposure levels, respiratory intakes, and depositions of the aerosol. A detailed description of the facility was presented at the Third Colloquium on Particle Matter and Human Health in Durham, NC, in June 1999, and has been published (Chalupa et al., 2002). Because our initial exposure mass concentrations are within the range of PM10 measurements outdoors, it was important to know numbers and mass concentrations of particles within the Clinical Research Center and the Environmental Chamber where the facility is located, as well as in the intake air for the exposure facility. These measurements were performed, and the ambient measurement results were reported at the Third Colloquium on Particulate Matter and published (Riesenfeld et al., 2000).

For our initial studies, exposures were conducted at rest with a relatively low concentration of pure carbon UFP (~10 µg/m3, ~2 x 106 particles/cm3, count median diameter 26.4 nm, geometric standard deviation: 2.3). Twelve healthy nonsmoking subjects (6 female) inhaled either filtered air or UFP by mouthpiece for 2 hours at rest, with a 10 minute break after the first hour. Exposures were double blinded, randomized, and separated by at least 2 weeks. The total respiratory tract deposition fraction (DF) was determined for six different particle size fractions after correction for system losses, and the overall DF was calculated for both number and mass for each subject. Respiratory symptoms, spirometry, blood pressure, pulse-oximetry, and exhaled nitric oxide (NO) were assessed before and at intervals after the exposure. Sputum induction was performed 18 hours after exposure. Continuous 24-hour, 12-lead Holter monitoring was performed on the day of the exposure and analyzed for changes in heart rate variability and repolarization phenomena.

We found no significant differences in respiratory symptoms, blood pressure, pulse-oximetry, spirometry, exhaled NO, blood markers of coagulation and endothelial activation, leukocyte activation, or sputum cell differential counts. There was no convincing evidence for significant effects on heart rate variability, repolarization, or arrhythmias. We concluded that exposure to 10 µg/m3 pure carbon UFP at rest does not cause significant respiratory or cardiac effects in healthy nonsmokers.

We then initiated studies, also in healthy subjects, to examine concentration-response effects, and to incorporate exercise. Subjects received each of three exposures (air, 10, and 25 µg/m3 UFP), which were separated by at least 2 weeks. A total of seven visits were required for each subject. Monitoring and measurements were identical to those for the resting exposures.

The planned 12 subjects (6 male and 6 female) completed all phases of the study. Analysis of variance was performed by Dr. Cox, from the Biostatistical Core of our PM Center. Analyses indicated that exercise further increased the relatively high resting deposition of UFP (number DF at rest: 0.63 ± 0.04; exercise: 0.76 ± 0.06; means ± SD).

There were no particle-related effects on symptoms, spirometry, airway NO production, or sputum cell differential counts. There was a significant exposure-gender interaction for an effect on oxygen saturation (p = 0.02), with oxygen saturation decreasing slightly in females at 21 hours after exposure only with the highest concentration of UFP (25 µg/m3).

There was evidence for a concentration-related effect of UFP exposure on the percentage of blood monocytes, with the response differing by gender. In addition, monocyte expression of CD54 antigen (also known as ICAM-1) decreased after exposure in a concentration-response pattern (p = 0.001), with the greatest effect occurring at 0 and 3.5 hours after exposure, and the differences resolved at 21 hours after exposure. Overall, the findings from UPDOSE appeared to provide evidence for modest effects of UFP exposure, with exercise, on blood monocyte number and leukocyte expression of surface markers. In general, surface marker expression decreased in association with UFP exposure, consistent with retention of higher expressing cells within the capillary bed.

Electrocardiogram (ECG) recording analyses showed that the response of the parasympathetic system (measured by normalized units of high-frequency [HF] components) was blunted during recovery from exercise immediately after exposure to UFP in comparison to air exposure. This diminished vagal response was not observed 3.5 hours later. The analysis of QT interval duration and T wave amplitude also showed a blunted response after UFP exposure in comparison to pure air exposure. The QT and QTc shortened during exercise more substantially during UFP exposure than during pure air exposure, and the QT and QTc interval remained shortened for several hours after UFP exposure but not after pure air exposure. These findings suggest that inhalation of UFP at both concentrations altered myocardial repolarization in healthy subjects.

UFP Exposure in Subjects with Asthma

Subjects with asthma may represent a group with increased susceptibility to the health effects of ultrafine particles, both because of the possibility of increased airways deposition of particles, and because of underlying airway inflammation. We have completed a clinical exposure study of subjects with mild asthma. Sixteen subjects (8 male, 8 female) were exposed to air and to 10 µg/m3 carbon UFP for 2 hours with intermittent exercise. We measured effects on pulmonary function, symptoms, airway inflammation (exhaled NO and induced sputum), blood leukocyte activation, and cardiac electrophysiologic function. Because these studies were performed using mouthpiece exposures, we were able to measure ultrafine particle deposition during exposure, and to compare findings with our previous studies in healthy subjects. These studies also were funded by a contract with the Health Effects Institute. The U.S. EPA support for these studies was focused on assessing exposure-associated changes in vascular and endothelial function. This included developing a methodology for measurement of systemic endothelial function using flow-mediated dilatation of the forearm and measurement of plasma concentrations of nitrite/nitrate and soluble CD40 ligand. The results were analyzed in collaboration with the Biostatistical Core of our PM Center, as were the previous studies. 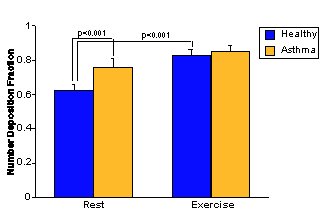 There were no significant changes in respiratory symptoms or pulmonary function in response to these exposures. Subjects did not report an increase in medication use following exposures.

In summary, data on leukocyte expression of adhesion molecules in subjects with asthma, similar to the findings for healthy subjects, suggest modest effects of UFP exposure with exercise. In general, the effect appears to be a reduction in expression, or a blunting of the post-exposure increase seen after air exposure. These findings are consistent with increased vascular retention of leukocyte subsets in the hours following UFP exposure, perhaps due to pulmonary vasoconstriction.

For the last six subjects studied in this project, we examined effects of UFP exposure on endothelial function by performing flow-mediated dilation of the forearm circulation before exposure and 24 and 48 hours after exposure. Figure 2 shows the change from pre-exposure in post-ischemic total forearm flow compared with the baseline measurement. After air exposure, flow-mediated dilation increased compared with pre-exposure baseline, an expected response to the exercise during the previous day's exposure. This response was blunted, however, following UFP exposure. At 48 hours, there appeared to be a rebound, with the change in total flow greater after UFP than after air.

Because flow-mediated dilation is mediated by endothelial NO, we measured the plasma NO products nitrite and nitrate before and after exposure in all 16 subjects in this study. As shown in the inset in Figure 6, we found a significant increase in blood nitrates 48 hours after exposure. This finding is consistent with a rebound increase in NO production, which likely mediates the rebound seen in flow-mediated dilation. These data support the hypothesis that exposure to very low concentrations of UFP alters systemic endothelial function. This is a novel finding, and we have now begun a study to determine if exposures in healthy subjects have similar effects on vascular function, and to determine the time course of the response. 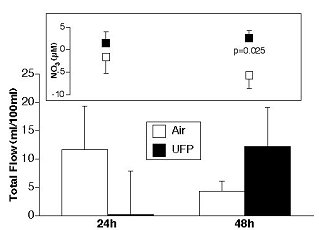 In summary, our study indicates that asthmatics have increased airway deposition of ultrafine particles, and that exposure to even low mass concentrations of ultrafine particles alters circulating leukocyte subsets. These data are most consistent with an alteration in leukocyte retention in the pulmonary circulation. In addition, our preliminary results also suggest that there are effects on systemic endothelial function.

We have developed and validated an exposure system for human studies of inhalation of ultrafine particles. We have demonstrated that the total respiratory deposition of ultrafine particles is relatively high, consistent with prediction models. UFP deposition increased further with exercise, however, and in the presence of mild asthma. Inhalation of ultrafine carbon particles at concentrations up to 25 µg/m3 caused no symptoms, changes in lung function, or evidence for airway inflammation. Our hypothesis that inhalation of ultrafine carbon particles would cause pulmonary inflammation and an acute phase response was not confirmed, although we observed subtle changes in blood leukocyte subsets and adhesion molecule expression that suggest that there may be effects on endothelial function. The finding that these very low mass concentrations of particles have vascular effects would have important implications for future particulate matter regulatory strategies. Further studies are needed to confirm our observations and to determine effects in people with underlying vascular dysfunction.


Journal Articles on this Report : 13 Displayed | Download in RIS Format