The objective of this research project is to utilize controlled human exposures to examine, in healthy and potentially susceptible subjects, the deposition and fate of inhaled ultrafine carbon particles (UFP), and the role of UFP in inducing health effects.

UFP Exposure in Subjects With Asthma. Subjects with asthma may represent a group with increased susceptibility to the health effects of ultrafine particles, both because of the possibility of increased airways deposition of particles, and because of underlying airway inflammation. We have completed a clinical exposure study (co-funded by the Health Effects Institute) of subjects with mild asthma. Sixteen subjects (8 male, 8 female) were exposed to air and to 10 µg/m3 carbon UFP for 2 hours with intermittent exercise. We measured effects on pulmonary function, symptoms, airway inflammation (exhaled nitric oxide [NO] and induced sputum), blood leukocyte activation, and cardiac electrophysiologic function. Because these studies were performed using mouthpiece exposures, we were able to measure ultrafine particle deposition during exposure and compare the findings with our previous studies in healthy subjects. 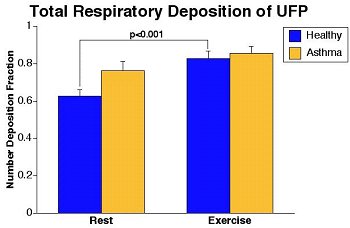 Symptoms and Lung Function. There were no significant changes in respiratory symptoms or pulmonary function in response to these exposures. Subjects did not report an increase in medication use following exposures.

Blood studies revealed a particle-related increase in the total white blood cell count, with an increase in blood PMN and decreases in blood lymphocytes and eosinophils. There was a reduction in expression of several adhesion molecules on circulating blood leukocytes, including ICAM-1 (CD54) and L-selectin (CD62L) (see Figure 2). These data are similar to the effects on blood cells seen in our earlier studies of healthy subjects, but appear to be present at a lower exposure concentration in asthmatic subjects, suggesting asthmatics may have heightened sensitivity for these effects. These findings are consistent with a change in vascular retention of leukocyte subsets in the hours following UFP exposure. 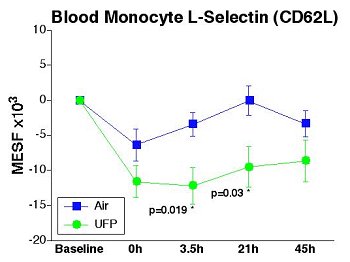 Effects of UFP Exposure on Endothelial Function. For the last six subjects studied in this project, we examined effects of UFP exposure on endothelial function by performing flow mediated dilatation of the forearm circulation before exposure and 24 and 48 hours after exposure. Figure 3 shows the change from preexposure in post-ischemic total forearm flow compared with the baseline measurement. After air exposure, flow-mediated dilation increased compared with preexposure baseline, an expected response to the exercise during the previous day’s exposure. However, this response was blunted following UFP exposure. At 48 hours, there appeared to be a rebound, with the change in total flow greater after UFP than after air. 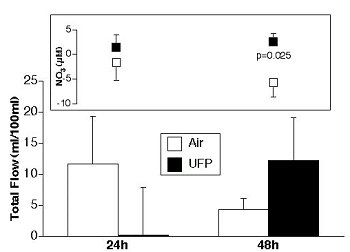 Flow-mediated dilation is mediated by endothelial NO, so we measured the plasma NO products nitrite and nitrate before and after exposure in all 16 subjects in this study. As shown in the inset in Figure 3, we found a significant increase in blood nitrates 48 hours after exposure. This finding is consistent with a rebound increase in NO production, which likely mediates the rebound seen in flow mediated dilation. These data support the hypothesis that exposure to very low concentrations of UFP alters systemic endothelial function. This is a novel finding, and we have now begun a study to determine if exposures in healthy subjects have similar effects on vascular function, and to determine the time course of the response.

In summary, our study indicates that asthmatics have increased airway deposition of ultrafine particles, and that exposure to even low mass concentrations of ultrafine particles alters circulating leukocyte subsets. These data are most consistent with an alteration in leukocyte retention in the pulmonary circulation. In addition, our preliminary results suggest there also are effects on systemic endothelial function.

Future activities include the continued testing of healthy and potentially susceptible subjects to further investigate the role of UFP in relation to human health. We plan to test the hypothesis that exposure to carbon UFP alters systemic endothelial function. We are initiating a new study in healthy subjects using an exposure concentration of 50 µg/m3. Subjects will be monitored for a total of 48 hours after exposure and we will examine the time course of effects on endothelial function using the forearm flow mediated dilation test. We also will measure plasma levels of the vasoactive mediators NO and endothelins. The common blood endpoints that we have developed with Core 2 also will be measured in this study.


Journal Articles on this Report : 8 Displayed | Download in RIS Format