In 2018 BioLargo, Inc. submitted a proposal under SBIR Phase I Solicitation No 68HE0D18R0010, titled, "Innovative Pretreatment Technologies to Remove Per- and Poly-fluoroalkyl Substances from Water (PFAS)".  The focus of the submittal was to address the need for a pre-treatment technology to remove PFAS from industrial wastewaters. In response to this request BioLargo proposed the AEC.  The technical basis for the AEC concept is the electrical properties of the PFAS and is similar in principle to electrostatic precipitation and electro-separation.  The primary goal of the Phase I was to demonstrate that the AEC could effectively remove the tested PFAS from water, producing a concentrate stream.  In commercial application, the concentrate stream would be further treated using a variety of other technologies, such as advanced oxidation processes, reverse osmosis, and granular activated carbon.  By providing a concentrate it is anticipated that the capital and operating costs of downstream treatment technologies can be reduced.
In the technology's simplest form three chambers are used: Feed Chamber, Anion Exchange Membrane (AEM) Chamber, and Cation Exchange Membrane (CEM) Chamber.  The Feed Chamber is bounded by the AEM and CEM, and the AEM and CEM Chambers are bounded by the respective membranes and the anode and cathode electrode plates.  PFAS contaminated feed enters the Feed Chamber and is treated to remove PFAS that pass through the chamber.  The PFAS removed from the Feed Chamber passes through the AEM and is isolated in the AEM Chamber.  In a flow-through system the extent of concentration can be adjusted by varying the AEM chamber purge liquid rate.

The study was conducted on a "bench" scale at BioLargo's office in Oak Ridge, Tennessee (TN).  To achieve test objectives, the testing program was divided into two activities.  Activity I involved bench scale testing on a batch basis, and Activity II involved bench scale flow-through testing.  In all tests two PFAS were introduced into a synthetic stream of deionized water and sodium chloride at concentrations ranging from 50 to 500 milligrams per liter (mg/L).  Depending on the test run the two tested PFAS were each spiked into the feed at either 2 parts per billion (ppb), 10 ppb, or 100 ppb.  The specific PFAS tested over the program included Perfluorooctanoic acid (PFOS) and Perfluorooctanesulfonic acid (PFOA).  Analytical support was provided by the University of Tennessee, Knoxville.  Figure 1 shows a BioLargo chemist providing assistance at the University of Tennessee, Knoxville (UTK) laboratory.  All of the initial tests in Activity I (Batch AEC) were conducted at 100 parts per billion (ppb), and the testing during Activity II (flow-through AEC) was conducted at either 2 or 10 ppb.
For each test activity, the testing objectives were achieved by dividing the tests into a main set of parametric runs that were conducted over a range of operating conditions.  These tests are referred to as the main test suite (MTS).  In addition, other tests were conducted with a specific focus.  Examples include testing at different electrode spacing and testing at different feed temperatures.  Testing results were evaluated over a range of operating conditions with key operating parameters including temperature, flow rates, voltage and current, initial feed concentration, AEM and CEM Chamber conductivity, and AEC residence time.  An attempt was made in the study to evaluate a full range of possible operating conditions.  For example, during Activity I a correlation was identified between salt removal and PFAS removal. This correlation was used in Activity II testing to adjust operating parameters to target 40 percent (%), 80%, and 98% salt removal in order to show a range of operating conditions and associated PFAS removal.

The study found total current to be reliable predictor of PFAS removal, and with less total current required for the same PFAS removal at lower initial feed salt concentrations.  In conducting testing a number of parameters appeared to be inter-related.  The study found voltage to be a predictor of overall cell resistance, with resistance inversely proportional to a nonlinear function of voltage.  Other AEC resistance predictors included AEM and CEM Chamber and feed conductivity. 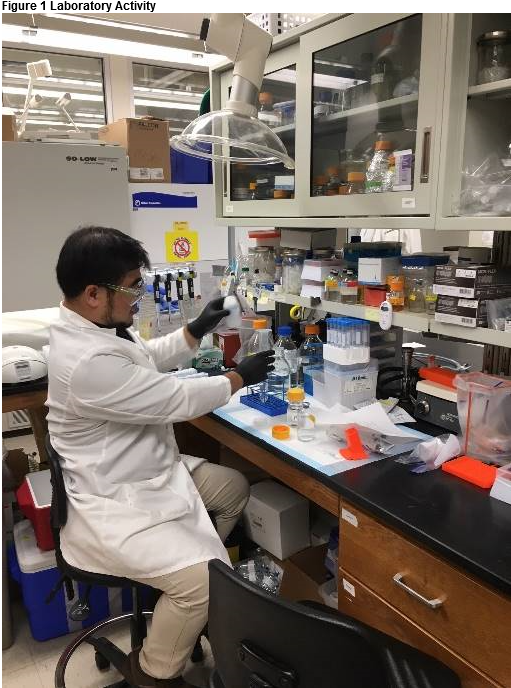 The study demonstrated the ability of the AEC to remove over 99 percent of total PFOA and PFOS from the feed stream.  During testing the AEC was operated at conditions that would provide a theoretical concentration factor up to 35 times, based on the ratio of Feed Chamber rate to AEM Chamber rate when operating in flow-through mode.  With additional testing, higher concentration factors are expected to be achieved.
As an unexpected result, the research also demonstrated that PFOA and PFOS were not present in the AEM or CEM Chambers above 30 parts per trillion (ppt) after treatment indicating that the PFOA and PFOS may be chemically modified or decomposed by the AEC.  This concentration is below the current total PFOA and PFOS US Environmental Protection Agency guidance level of 70 parts per trillion (ppt) for total PFOA and PFOS.  Additional testing is currently underway to identify the destruction mechanism.  Therefore, the AEC may function to both concentrate the PFAS and/or to provide PFOA and PFOS destruction.
Plots of PFAS mass removal as a function of total current per 1000 gallons treated were prepared to allow an assessment of treatment current requirements.  These show the required total current to be a function of the initial feed concentration, with lower total current and energy costs required for lower initial salt content at a given PFAS removal percentage.  A graph of total current required for a given percent PFAS removal in a flow -through system is provided in Figure 2, and a corresponding graph for energy is provided in Figure 3.  These results show treatment costs as low as $0.30 per 1000 gallons of treated water. Energy costs are based on the US Energy Information Administration, July 2019 national average electricity price for industrial facilities.  These costs are based on actual Phase I testing and have not been adjusted to reflect findings from the Phase I study.  Based on the Phase I results it is expected that the energy costs to operate a full-scale system will be at least two times lower.
BioLargo is continuing to conduct testing on the bench scale unit and is exploring sitting options for a field demonstration unit. The initital field pilot is expected to be sized with a capacity in the range of 1 to 5 gallons per minute (gpm). 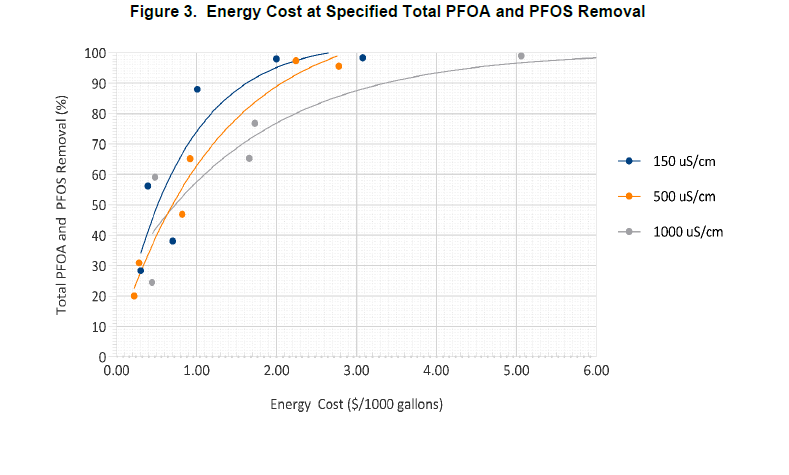