3 publications for this project

2018 Progress Report: Husk-to-Home: A Sustainable Building Material for the Philippines

With today’s growing climate changes, there has been a global pursuit of green (environment-friendly) technology and materials. This type of technology is necessary to facilitate the harsh effects that natural disasters (and the environment) have on the surrounding communities. The need for green technology was made painfully clear after the temporary shelters for 350,000 Boholanos families in the Philippines collapsed due to extensive termite damage. These families had to survive through the destruction of their homes on two separate occasions; once after a 7.1 magnitude earthquake in 2013, and again after their temporary homes collapsed. While disasters like earthquakes cannot be prevented, the collapse of the shelters can be prevented through the application of green technology.

After the earthquake in 2013, the International Deaf Education Association (IDEA), a local non-government organization, sought to provide housing for these displaced families by constructing temporary shelters made from coconut lumber, plywood, and bamboo. These shelters were anticipated to last up to 5 years, however they sustained extensive termite damage after being built which caused them to be deemed uninhabitable after two years. Since termites have always been a detrimental environmental factor for buildings made of wood, IDEA realized that it could not afford the strain of termite repairs and sought to replace the ordinary plywood used in its shelters. They needed their shelters to be made from a termite-resistant, structurally-sound, and environment-friendly material while still being relatively inexpensive when compared to competitor’s building materials.

Husk-to-Home was formed in an effort to help IDEA realize the creation of a termite-resistant building material. The Philippines has an abundance of natural termite-resistant material, which is disposed of as waste or incinerated. Husk-to-Home plans to use the Philippines’ excess waste product of rice husks and straw to engineer an effective termite-resistant building material. This project will be completed in two phases. The first phase will be focused on developing a cost-effective, recyclable, and weather/termite-resistant exterior house siding in the form of particleboards. The second phase will consist of philanthropic efforts that revolve around using Husk-to-Home’s inexpensive, durable rice-composite siding to rebuild communities destroyed by natural disasters. By establishing a future partnership with Habitat for Humanity, Husk-to-Home will be able to reach a wider range of communities in need of help.

Husk-to-Home’s core objective is to become a successful, non-profit corporation that can prevent housing emergencies like the one that impacted the 350,000 Boholanos families by using “green” technology to create an innovative building material. This type of “green” material not only saves scarce materials (like wood in a world where global deforestation is a possibility due to climate change) but also utilizes the copious amount of waste products from local resources (such as rice-husk). 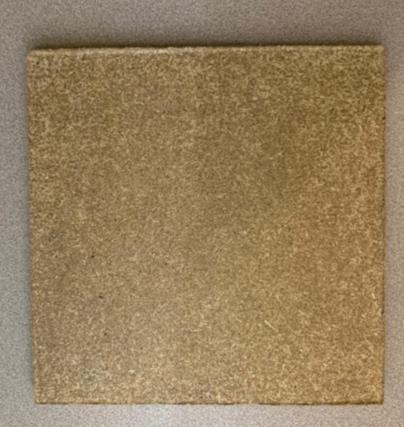 The bench-scale production of Husk-to-Home’s prototype board has been evaluated with in-house and outsourced testing to determine the product’s validity. The fiber plastic composite (FPC) boards that have been designed and optimized were evaluated for mechanical properties through compression, three-point bend, and nail pull through tests. Compression tests were performed on 2’’ × 1” × ½” board samples and three-point bend tests were performed on 8” × 1.5” × ½” board samples using an Instron 5969 mechanical tester in accordance with ASTM standards. Our current FPC board can be seen in Figure 1. Water absorption testing was also performed with reference to ASTM standards and methods, in a 24-hour soak test. All tests were performed at the University of California, Riverside. For further testing, samples were sent out to an independent lab, NTS, for nail head pull through, 24-hour soak, moisture content, and Janka ball hardness testing. Testing at NTS was completed in accordance with ASTM standards and with competitor samples of medium-density fiberboards (MDF), oriented strand boards (OSB), and CD grade plywood for comparison. Nail head pull through tests were comparable to other brands while Husk-to-Home’s board tested better than competitor boards in the 24-hour water soak and moisture content. Additionally, the Husk-to-Home board recorded hardness results not provided by competitor materials. A summary of NTS test results can be found in Table 1.

Furthermore, an independent testing lab RADCO, has conducted accelerated aging tests on our prototype siding. Here, ASTM standards require that the specimens withstand harsh environments simulated by exposure to steam, freezing temperature, and water submersion. RADCO concluded that the test specimens did not show any signs of disintegration, confirming that it was able to withstand at least 25 years of simulated weathering under intense conditions. A summary of the RADCO testing results and additional results can be found in Table 2.

Further investigation into the recyclability of the board has started. By using a bandsaw in UCR’s Machine Shop and a hammer mill grinder, old boards were sliced into thin pieces and then refined into a powder mix. This mix was then pressed into a board again using our board making procedure. Initial results of mechanical testing appear to be promising. Current results show that the recycled board has roughly 60-70% of the same mechanical strength of an original board. All flexural and compressive testing was performed in accordance with ASTM standards. Further testing will be performed on varying combinations of new and recycled board mixtures to determine an optimal ratio. We aim to create a board than can utilize material from pressed and unpressed material that will have the same mechanical properties of our current prototype. The goal is to achieve a proof-of-concept for a 100% recyclable board to patent. Examples of the cut boards used in this investigation are shown Figure 2. A summary of the mechanical testing results can be seen in Table 3. 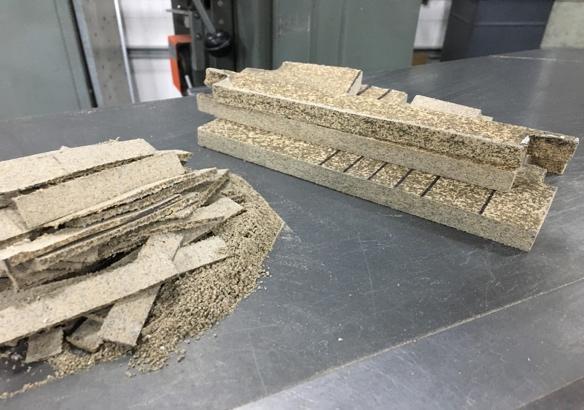 Further, the team is preparing to perform UV testing on the Husk-to-Home board, both in-house and outsourcing. The testing samples will comprise of Husk-to-Home uncoated, Husk-to-Home with varnish, Husk-to-Home with polyurethane, competitor uncoated, and competitor coated. The goal of this testing is to determine the effects of exposure on the board by itself, and with two types of protective coating. A direct comparison will also be made with the competitor’s board results. In addition to UV testing, Husk-to-Home will also be outsourcing controlled fire testing of the board to a fire lab at the University of California, Riverside. Initial home fire testing was completed and showed promising results, as the board did not catch on fire. A blow torch was held to the board outdoors and only resulted in charring of the board. Results of the home burn tests can be seen in Figure 3. 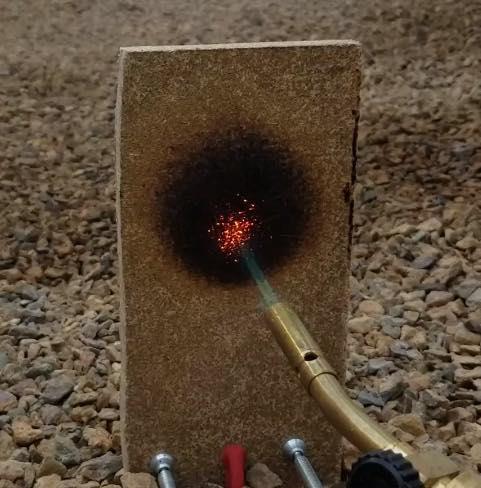 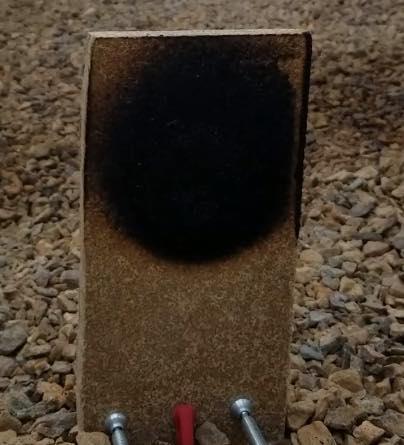 Figure 3: Husk-to-Home FPC Board with and without torch

Commercialization of the board as a house siding has been a primary focus for the team for the fulfillment of the initial phase of introducing the material to market. With the addition of the business administration undergraduate team members, the board’s marketability and manufacturing costs have been thoroughly considered. Husk-to-Home’s particle board is currently made with a hot press which can only produce 9” × 9” boards. The typical siding panel is approximately 8” × ½” × 15’. A key indicator of success will be the creation and mass manufacturing of siding panels with our recipe.

Husk-to-Home is in the process of creating a new mold for ⅛” boards that will have dovetail edges to enable the formation of larger boards when linked together and pressed again. The pressing of these boards will be achieved by introducing an adhesive and/or new board mix between the boards, and then using a hot rolling mill to press and bond the boards together. Initial testing into the viability of this procedure has been performed to observe the cooling properties of the material. Currently, Husk-to-Home plans to introduce the boards to a rolling mill, press them with the mill while introducing heat, and then quench them. Cooling tests have shown that quenching the material with contact to room temperature steel produces some of the most consistent results. As seen in Table 5, the mechanical strength of the ⅛” boards quenched in air, water, and room temperature metal varied.

As Husk-to-Home works towards a sustainable wood substitution, the team hopes success in the siding industry will provide the credibility to adapt our material to the greater needs of consumers. Once successful in creating a wood standardized product, Husk-to-Home will begin establishing itself in the furniture industry. Potential partnership with Habitat for Humanity will provide philanthropic opportunities for Husk-to-Home products. Philanthropy will allow the team to reach those with specific needs that can only be met with this innovation while simultaneously speeding up the process of word-of-mouth marketing for the business. Through a partnership with a non-profit, Husk-to-Home will be able to provide quick assistance with the sustainable, adaptable, and durable material wherever it is needed while proving the quality to the rest of the world.

The current team’s end goals are to be a licensed corporation with a patentable technology for legitimacy and to have a proof-of-concept for the 100% recyclability of the current board. Additionally, the team looks to further prove the durability of the board through fire and UV testing. The incorporation of Husk-to-Home will be facilitated through research into the business and economics aspects of a company, specifically to be performed by the new business administration team members. Board cooling testing, UV testing, and the scrap board project are planned be completed by June 2019. Meanwhile, further outsourced fire and UV testing will be completed to strengthen the patentability of the board as a durable material. Husk-to-Home looks to have a novel, patentable technology by 2020.

No journal articles submitted with this report: View all 3 publications for this project