The Fluoride team at AguaClara Cornell is designing a continuous, gravity-powered treatment system for removing fluoride from groundwater to make it safe for drinking. The system is sustainable both economically and environmentally, by using no electricity to drive water or chemicals through the plant. It will also be built using local labor and materials. This stipulation translates to fewer emissions from transporting materials and equipment, and provides a bolster to local economies. Flow through the system depends only on gravity, meaning it is more reliable and maintainable than an electricity-powered plant. The plant utilizes the Nalgonda method, which uses an aluminum species as a coagulant and can be applied to either batch or continuous systems ( Nawlakhe and Paramasivam 1993) ; as aforementioned, the AguaClara Fluoride Team is applying it to a continuous system. Fluoride-contaminated water enters the plant and is dosed with the aluminum coagulant. The water then enters a flocculator, where turbulence in the flow increases collisions between fluoride and coagulant particles and creates massive floc particles containing fluoride and aluminum hydroxide. Afterwards, the water enters a sedimentation tank, in which the denser flocs settle in a fluidized bed, called a “floc blanket,” while the water with a concentration of fluoride below 1.5 mg/L exits from the top of the tank. One main objective of the project is to optimize the quantity of fluoride ions removed for the amount of coagulant added to the system. The team has been using polyaluminum chloride, or PACl (Al 2 (OH) 3 Cl 3 ), as a coagulant. One previous study carried out at the Malaviya National Institute of Technology used a batch method for removing fluoride and found that when taking effluent fluoride and aluminum concentration, turbidity, and total dissolved solids into account, an optimal dosage was 200 mg/L of PACl for 4 mg/L of influent fluoride (Dubey et. al. 2018). The Fluoride Team had the objective to design a continuous system that would be able to remove a comparable amount of fluoride but with less PACl. This research was projected to last from February 2017 to January 2020. The main area of focus was India, where many drinking water sources come from groundwater that contains unsafe concentrations of fluoride for ingestion; the pooled concentration has been found by one study to be 2.37 mg/L (Ali et. al. 2019). Each semester, the Fluoride Team was made up of Cornell University undergraduate and Masters of Engineering students who underwent an application process to join the team.

From February 2017 to April 2018, the team focused on adapting the Nalgonda method for a continuous laboratory-scale system. Initial tests were carried out using an automated system with pumps, shown below. The flocculator was a 46-foot length of ¼” clear and flexible tubing wrapped around an 8.5 cm diameter tube. The sedimentation tank was a 1” clear PVC tube bent at a 60° angle to mimic the plate settlers of an AguaClara plant (AguaClara Textbook). A ¾” PVC tube was welded to the sedimentation tube as a floc weir, for excess flocs to exit the tube. With this design, the team succeeded in removing flocs from the water, with red dye as well as fluoride, which is much more difficult to see. 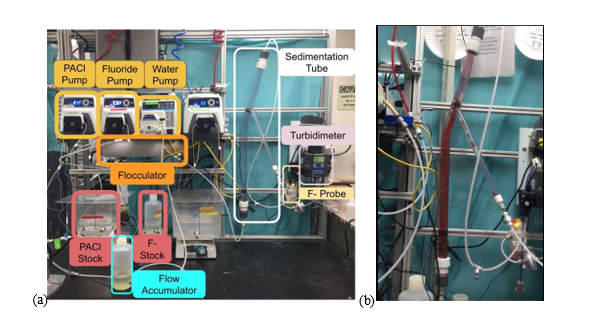 Figure 1. (a) The laboratory-scale apparatus includes dosing of PACl, flocculation, and sedimentation. (b) The sedimentation tube tested with flocs made from PACl and red dye. The flocs form a fluidized bed of recirculating particles. When the floc blanket reaches the height of the floc weir, (the downwards-pointing tube), excess flocs spill into it. The weir can then be emptied through a waste line. From Summer 2018 to Spring 2019, the team built a lab-scale gravity-powered system modeled after the automated system. The flow of water was adjustable and was determined by the height difference between the Fluoride Constant Head Tank and the effluent tubing height. The dosing of PACl was gravity-powered, and was implemented as a drip system using microbore tubing, shown in Figure 2b. 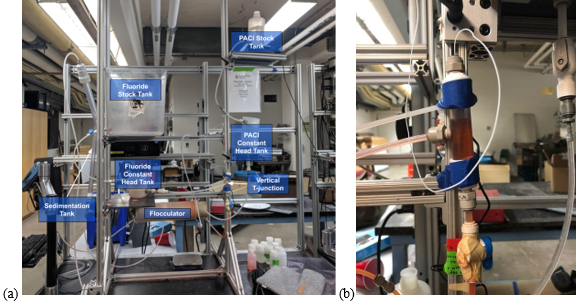 Figure 2. (a) Lab-scale prototype of the continuous water treatment system for removal of ionic fluoride. (b) Drip-chamber system made of microtubing and a vertical T-junction for dosing of PACl. In Spring 2019, the team succeeded in running the system as expected: the fluoride-contaminated water received a dosage of PACl and flowed to the flocculator then to the sedimentation tube. There were initial problems with flocculation not occurring. To resolve this issue, the team moved the effluent tube higher up to decrease the flow through the plant and allow for a higher residence time in the flocculator, which increased the opportunities for collisions between coagulant and fluoride particles. There was also a problem with gelling in the sedimentation tube, which meant that, instead of remaining fluidized, the floc blanket became solid and prevented the flow of water through the tube. The team realized that this problem occurred with high doses of PACl (above 30 mg/L), so the height of the PACl Constant Head Tank was adjusted for a lower flow of PACl to ensure that gelling would not occur in the future. After designing the system, the team began to test different coagulant doses and track effluent fluoride concentration and turbidity. The goal was to find an optimal coagulant dose for treating fluoride, and to determine the mechanism by which the fluoride and coagulant nanoparticles bond. This knowledge would allow a plant operator to predict an optimal coagulant dose based on an influent concentration of fluoride. The data was originally fit to a Langmuir Isotherm, since the initial hypothesis was that fluoride binds to PACl through adsorption. The results, which are shown below, reveal a discrepancy between data from different semesters and indicate that this might not be the most accurate model for describing the PACl-fluoride interactions. 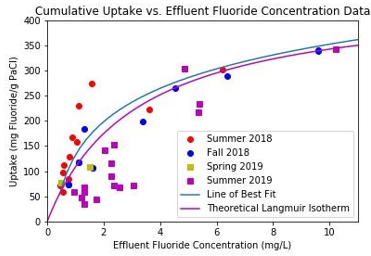 Figure 3. The Langmuir Isotherm developed by the team over four semesters. The y-axis, which is uptake, represents the efficiency of the PACl in removing fluoride. When using an influent fluoride concentration of 5 mg/L, the team found that the concentration would only consistently decrease to below 1.5 mg/L when the PACl dose was 35 to 40 mg/L, which is at leasttwice the concentration of PACl used to remove turbidity from clay and other surface water contaminants in existing AguaClara plants. However, this coagulant dose is still less than the 200 mg/L of PACl used to treat 4 mg/L fluoride-contaminated water from the aforementioned study by Dubey et. al., which shows promise for the usage of continuous systems for removing fluoride from groundwater in the future. One main concern that the team has not been able to reconcile is that the automated and gravity-powered systems do not produce the same results: during Summer 2019, the team found that the automated system removed more fluoride than the gravity system when using the same coagulant dose. The team is currently trying to find reasons for this discrepancy, since flow rates for the water and coagulant have been calculated and found to be the same for both systems.

AguaClara has implemented water treatment technologies throughout Honduras, Nicaragua, and India, but has not yet deployed the pilot plant for treating fluoride in groundwater. The funding for each plant depends on the community requesting the technology and any sponsors who join the project. In Honduras, many of the communities that have chosen to implement AguaClara water treatment infrastructure have a local water board that decides how to charge community-members for water utilities and how to allocate funds for purchasing chemicals, making repairs, and paying operators. Economically, implementing this gravity-powered technology for removing fluoride from groundwater is beneficial because it can eliminate financial burdens on individual families that would arise as a result of adverse health effects like fluorosis. Additionally, although groundwater is generally not as turbid as surface water, the current method of removing fluoride also removes other contaminants and particles that could carry disease. Thus, the health costs due to water-borne disease would also decrease, both for individual families and for communities overall.

This project has involved 23 undergraduate and 3 Masters of Engineering students. The Summer 2019 team was a collaboration between Cornell University and Ohio State University. Students in CEE 2550 (AguaClara: Sustainable Water Supply Project) at Cornell University learn about the unit processes used in the Fluoride Team research, and a project is underway to set up a similar class at Ohio State University. The Fluoride Team was part of the 2018 and 2019 AguaClara Summer Internship Program, a ten-week research-intensive opportunity for students to design and run experiments and analyze their own data.