2000 Progress Report: Chemokines in the Pathogenesis of Asthma (Asthma Chemokines)

Asthma represents a serious health problem particularly for inner city children. Recent studies have identified that many of the asthmatic attacks are triggered by exposure to cockroaches. It is not exposure to the entire cockroach, but only small fragments or residue. These small fragments are responsible for the allergic response and they are called allergens. In the normal allergic, or asthmatic response, the body reacts to the allergens to start inflammation. This inflammation is initiated by having the cells of the body produce specific chemicals or mediators. With asthma, most of the mediators are produced directly in the lung. While many potential mediators have been examined previously, asthma still exacts a toll on children and adults. More specific, targeted therapy has the potential to improve the treatment of asthma by identifying those mediators directly responsible for the causing disease. This research project will test the hypothesis that asthma-like pulmonary injury is mediated by the local production of specific mediators, which are called chemokines. Chemokines are small molecular weight proteins which induce the movement and recruitment of inflammatory cells. The chemokines are powerful mediators with long lasting and potent biological activities. The first specific aim is to determine the acute and chronic pulmonary inflammation that develops after direct injection of the chemokines into the lung. The assessment of the injury will include a microscopic analysis of the lung as well as an assessment of the nerves within the airways. The second specific aim is to develop a mouse model of asthma-like pulmonary inflammation in response to cockroach allergens. For this specific aim, a model in mice which is similar to humans will be set up to attempt to decipher the specific mediators that cause the lung injury. This model will be established by locating households with high levels of cockroach allergens and using this material to immunize the mice. The mice will be challenged by exposure to aerosols containing the dust with the cockroach allergens and the pulmonary injury carefully quantitated including an analysis of innervation of the airways. The third specific aim is to investigate the signals responsible for inducing the cells to make the chemokines. This will be done in cells sensitized and then challenged with cockroach allergens. This will focus on reactive oxygen and reactive nitrogen intermediates since they have been demonstrated to increase the synthesis of chemokines. The last specific aim is to rigorously test the central hypothesis that chemokines are important in causing asthma. This will be tested by blocking the biological activity of the chemokines with specific therapies to inhibit the chemokines and then determining if there is a reduction in the pulmonary inflammation induced by repeated exposures to the cockroach allergens. Successful completion of this project will both delineate the underlying mechanisms of disease and identify potential novel targets for intervention.

We have initiated our investigations into the immuno pathologic alterations that occur in asthma. Our studies began shortly after the initial grant award was given. We started with the first specific aim of the grant. The data indicated that the recombinant chemokines would recruit neutrophils to the lung in a dose dependent manner. Inbred strains of mice have been divided into high responder mice that are termed TH1 and low responder mice that are termed TH2. We additionally tested in the capacity for the chemokines to recruit neutrophils in TH1 (C57/Bl6) and TH2 (Balb/c) mice. These results demonstrated that either the high responder mice, or the low responder mice would respond equally well to the chemokines. Both strains of mice will actively and briskly recruit neutrophils into the pulmonary airspace following a local challenge.

The next step was to begin to develop a new murine model of asthma. Our original proposal intended to collect house dust from homes where children are experiencing symptoms of asthma. We collected dust from 10 such homes and prepared an aqueous extract of the material. This extract was then tested for the presence of several allergens including cockroach (Bla g I and II), dust mite (Der p1 and f1), cat (Fel d1) and dog (Can f1). Table 1 shows the results that we obtained from these analyses. As can be observed, the sample from number five contained high levels of the cockroach allergens.

Table 1. Concentrations of allergens in dust collected from 10 households in Detroit where children have asthma.

With these results, we revisited house number five and obtained a significant quantity of house dust. An aqueous extract was prepared from this material to be used for future studies. We next initiated our studies to develop the model of mouse asthma. The following protocol was used for this study. First, mice were immunized with the household dust extract combined with adjuvants. After 14 days, the lungs of the immunized mice were exposed to the host dust extract using the same protocol that had been devised for the exposure to the recombinant chemokines developed in year one. The mice were anesthetized, the tongue gently pulled forward, and the host dust extract placed in the back of the hypopharynx. Seven days after the second exposure the mice were once again re-exposed to the host dust extract. Forty-eight hours after the third exposure the mice were sacrificed and bronchoalveolar lavage performed to determine the inflammatory cell infiltrate. The results showed that the model could actively recruit eosinophils, the hallmark inflammatory cell of asthmatic attack, into the lung. We next conducted a dose response study where the house dust extract was diluted 1:1, 1:10, and 1:50 prior to immunization of the mice. These data demonstrated that, in a dose response manner, eosinophils are recruited into the lung (Figure 1). This figure also shows that the number of neutrophils did not vary significantly, but the number of lymphocytes (another marker of specific immune activation) did decrease.

These data indicate that the proposed model of murine asthma has been initially developed and characterized. We are in the process of purchasing a small animal pulmonary function apparatus in order to rigorously determine that airway hyperreactivity has been established in this model. 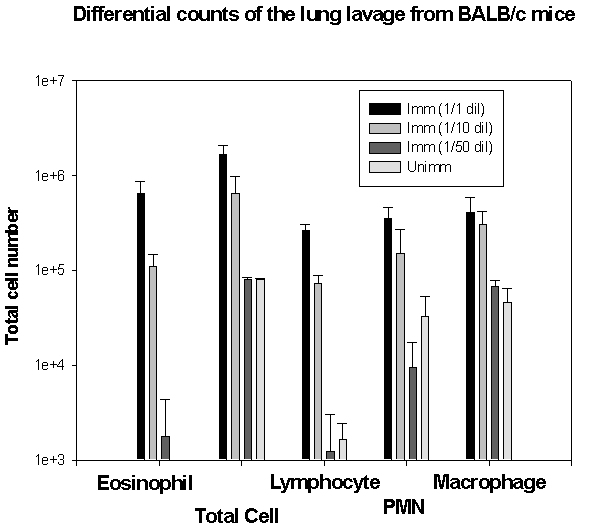 The intervention activities as described above for the wave one families will continue during the 2000-2001 year. In March 2001, families who have been randomized into wave two will begin to receive their intervention. In addition, the neighborhood-level community awareness and mobilization campaign will begin in the upcoming year. This phase of the intervention will include educational events on environmental triggers for asthma, working with neighborhood block clubs and associations, advocacy for families attempting to adopt new health behaviors, assisting with housing issues, and organizing and conducting activities to reduce physical environmental hazards in their neighborhoods. Air monitoring activities, as described above, will be ongoing throughout the upcoming year.

We will continue our investigations as planned. We should have completed our complete characterization of the most model within the next 6 months. We will then begin to assay for the pathogenic factors.

No journal articles submitted with this report: View all 3 publications for this subproject

R826710    Michigan Center for the Environment and Children’s Health


Subprojects under this Center: (EPA does not fund or establish subprojects; EPA awards and manages the overall grant for this center).
R826710C001 Indoor and Outdoor Air Contaminant Exposures and Asthma Aggravation Among Children (Asthma Exposure)
R826710C002 Chemokines in the Pathogenesis of Asthma (Asthma Chemokines)
R826710C003 A Community-Based Intervention to Reduce Environmental Triggers for Asthma Among Children (Asthma Intervention)